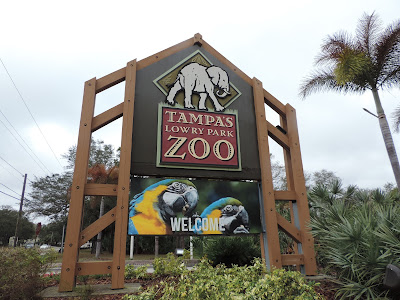 Lowry Park Zoo saw us through our third day in the lovely city of Tampa Bay, Florida. We spent a few hours in the a.m., exploring all it had to offer. If our visit had been longer, I wouldn't have complained one bit. There are a lot of attractions here, that are/would be so wonderful to actually spend some time and see. I'm not a spend-2-seconds-taking--picture and then moving on kind of person. I'd actually like to sit or stand and observe each of the animals that interests me for a bit. We didn't have much time for me to do that on this day, but I was still very glad we got to go. This was one of the attractions on our Tampa CityPASS, a book of free entry coupons that saves you a bundle when you are visiting the Tampa area (more to come on that later), and there's definitely a lot of value in visiting. 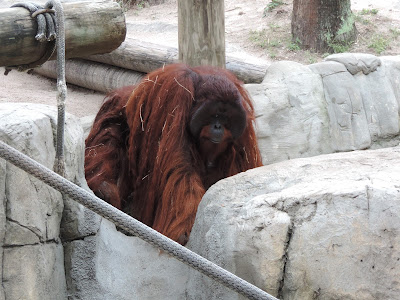 The first exhibit was the Primate Section and it was awesome to stand there and watch them roaming the stones and maneuvering on the swinging devices.


At one point, one of them looked really sad and went down to face the stones. Another went down to him/her and gave out a big hug...holding the sad one tight. That evoked a lot of 'aww's' from those of us who were watching.  Oh, and did I mention there's a baby Orangutan there too? Mama keeps her nice and close, which is very sweet to see. 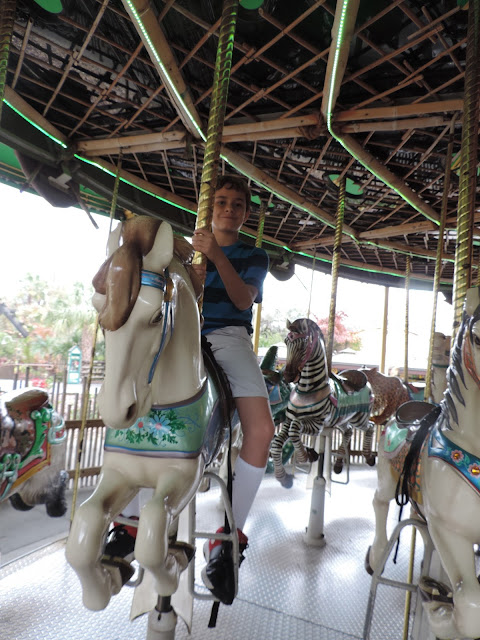 There was a kids' section with animals to view, a petting zoo, and rides. The only ride running though was the carousel. I'm not sure if it was because it was a Monday, or because the zoo was so slow (maybe we went too early in the day?). 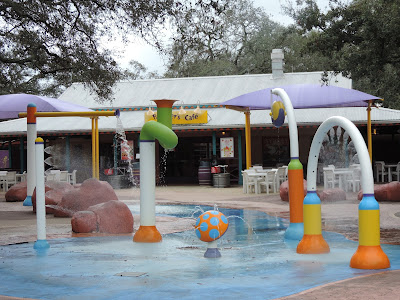 The splash pad was on but my 'little' guy is just a tad too big now for this... he misses that, and so do I, but growing up brings new adventures. :) 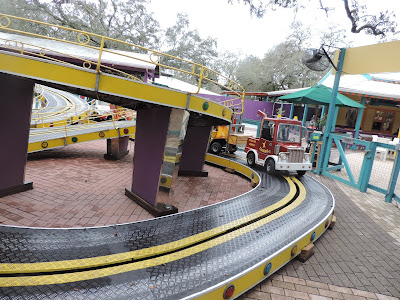 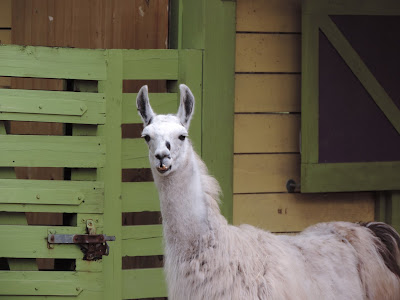 The petting zoo had a nice variety of animals, including this beauty of a llama. He looks as curious about us as we are about him. 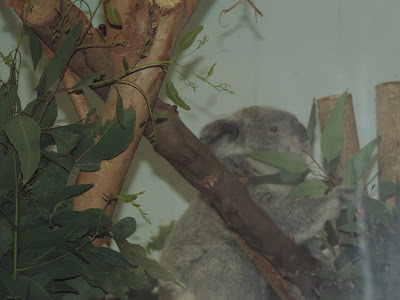 The highlight for both my daughter and I was the Koala. If I have seen one in person, I don't remember!! He was behind glass, but we had a good view of him, and I was able to get a couple of photos. 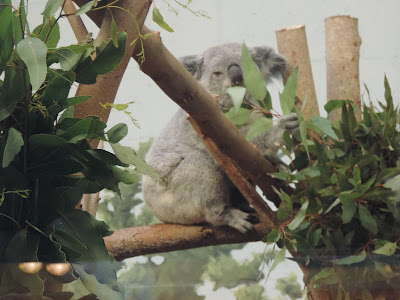 I wonder if he's thinking, 'oh there are the humans again,' (or whatever name it is he thinks of when he sees us). :) Or maybe he's thinking, 'that woman needs a new camera upgrade.' I hear ya, Koala Bear... I hear ya. 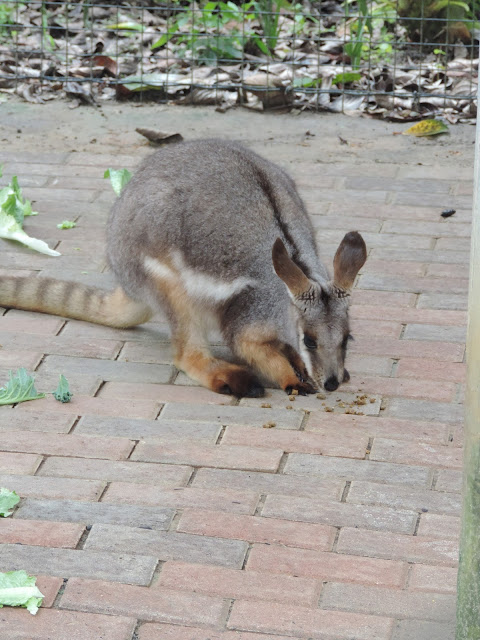 Heading into the kangaroo section, we had to go through two doors, making sure one was shut before being let into the other. The high security system was in place because evidently the residents inside like to escape when given the opportunity. ;) 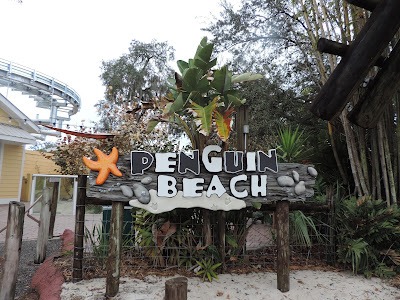 There was a section for penguins. I always laugh when I see penguins in Florida. It's not as uncommon as you might think. They seemed to be thriving though, so I guess they have replicated their environment well enough to make them happy. 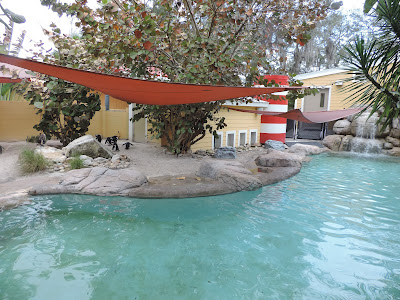 Here you can see them running along the beach in their little group. I suppose the water there is very cold, which of course they would need, and enjoy. 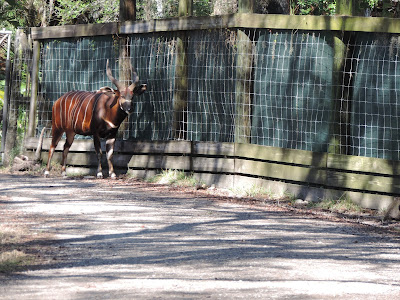 We took the mini safari to see some of the other animals that Lowry Park had on exhibit. There were gates you had to go through to get to each separate section. One stubborn fella didn't want to move so we could get through. I guess he was smart enough to know if he stayed and the gate opened, he could get out too. The driver of our safari train circled around again and radioed for help. Someone came with bribery (food) and we got through. :) I was glad we circled around again though, because I got to see the stork I missed on the original drive through. 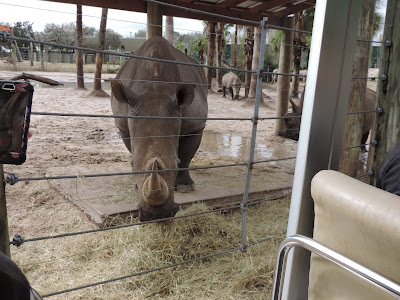 We passed the Rhino and that was a big deal. I always get excited to see them. they're just so obtrusively huge (in a beautiful way) and very, very strong looking. 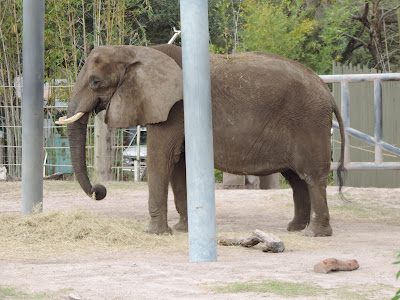 The African Elephants were lovely too. There is a special African Elephant Adoption Package you can purchase if you would like to help the zoo provide expert care and enrichment for the herd. Lowry Park Zoo currently has TWO African Elephant calves as well, and you can view these beauties year round. 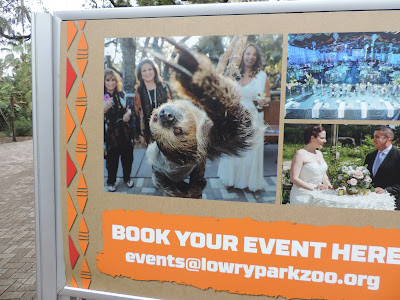 In fact, there were several things we didn't get to do because of personal time constraints (we had an appointment elsewhere in another city on the same day). One was the sloth and another was the bird area. I passed the latter though, and saw birds flying and landing on top of a man. His girl was taking pictures and it did look pretty awesome. They also had a Sloth Bear that we did make time to go see, but he wasn't feeling it that day...and stayed out of the viewing area for the guests. That's okay, I get it. Everyone needs their privacy when they want it...especially true, I'm sure at a place where visitors are in and out often, daily. I didn't learn until after I returned home that they had a baby hippo!! Oh, how I would have loved to see it!! Perhaps on a return visit. 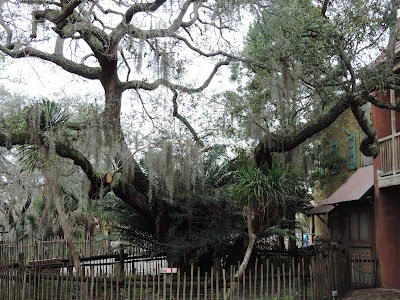 The scenery was pretty. I loved this tree. It's nice to see trees that are unusual. I don't know what this one is called, but I loved it just the same. 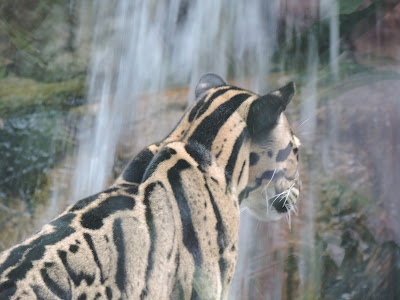 I always like to see the big cats. I understand some people think they shouldn't be caged up, but when you look at the stats for those who are vulnerable or almost extinct, it's alarming. Perhaps controlled breeding will help? I honestly don't know. I do know it would be a shame to lose any of these species, no matter the reason (rmost of which are senseless). This Clouded Leopard, who didn't turn around for a photo (daggone it), is listed as 'vulnerable.' 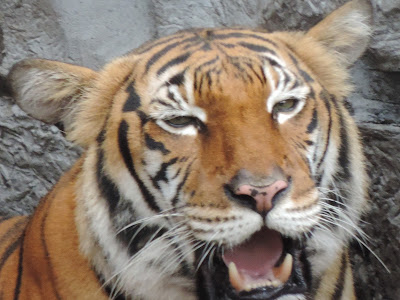 This Malayan Tiger is listed as Critically Endangered. I read that Lowry has a 2-year-old cub (born at the zoo) with her mom. I'm not sure which one this was, the mom or the cub. They were talking to one another though, we think. This one kept sending out a soulful sound and another sound would come back (we were assuming it was the other tiger). I'm not sure why they weren't together at that moment in the day, or if there is a dad involved, but we were very impressed with how breathtakingly gorgeous this tiger was in person. 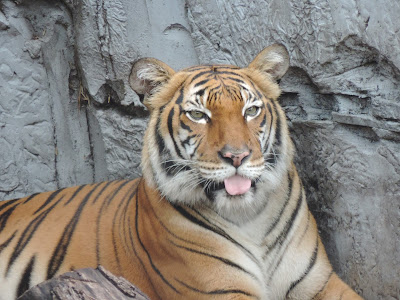 My daughter got one of him/her? chilling with a tongue out. Not panting, just sticking out his tongue looking cute. These tigers are naturally found only on the Malay Peninsula and in the southern tip of Thailand, if the information I found on them is correct. 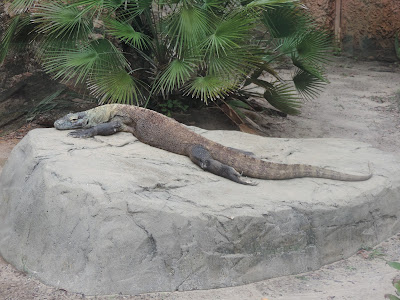 This bearded dragon was a sight to behold as well. I think it's the biggest one I've seen. 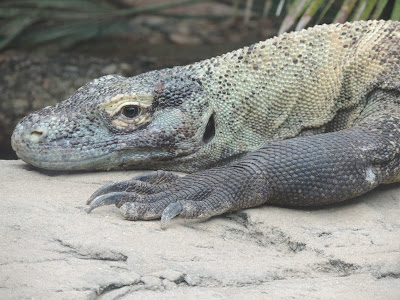 He didn't look phased by the paparazzi either. I guess all of the animals/reptiles are used to it now. :) 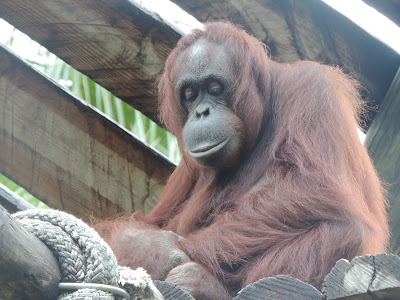 We had a nice visit to the zoo. I couldn't resist stopping at the Orangutans one more time on my way out. I'm sure this one in the photo above is a boy, because look at those lashes... the boys always get the lashes (at least in my family, lol) :) 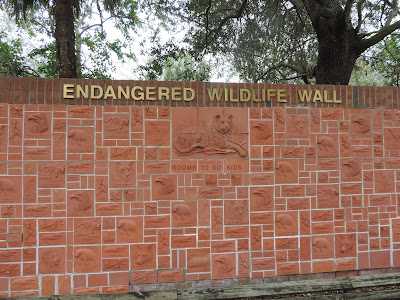 This wall here as we were leaving, had pictures and names (I'm assuming donors) engraved on it of wildlife that are currently classified as endangered. 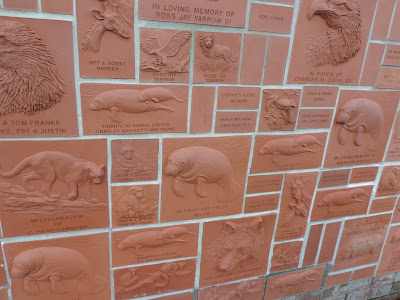 It's not news I like to hear for any animal, but the saddest for me is that the Florida Manatee is on the 'threatened' list. I'd love to see them make a hearty comeback. Ever the gentle souls, who are perfectly content to mind their own business, I would miss them if they were gone. I know I am not the only one. There is a great video clip on the Lowry Park Zoo Facebook page of a rehabilitated manatee being released back into the wild. I cannot say how much I love that they are doing this work. 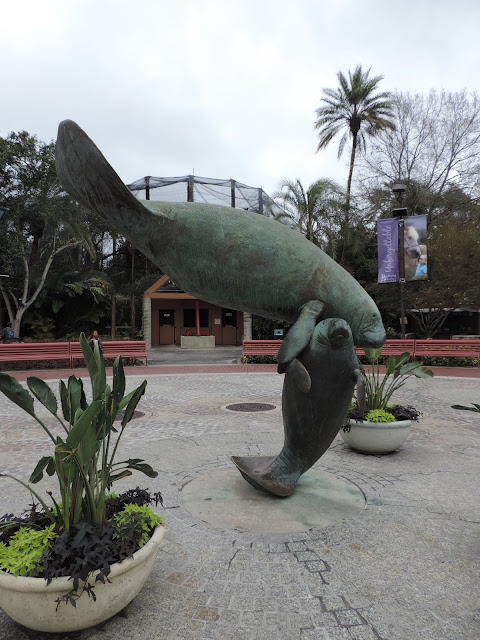 If you are in the Tampa area, why not take a visit to the Lowry Park Zoo? They certainly have a wonderful assortment of animals to see, only a select few of which I have mentioned here! In fact, they have over 1, 300 animal species on 60 acres of natural habitats. You can learn more by visiting the website. You can also visit them on Facebook, Twitter, Instagram and/or Pinterest.
on February 18, 2018