Disclosure: We received a family 4-pk of tickets and lunch for Blogger's Day. No other form of compensation took place. All opinions stated are sincere and completely my own.

I admit it, I'm a creature of habit. There is one amusement park I like, no...love, and it's the one I go to every single year (and that was true even when I lived 1,200 miles away). Perhaps I like it so much because it's where I grew up? In any case, it's made me so happy that besides Disney World, it's the only amusement park I consider when the warm weather shows up.

This year, we decided to do something different. Oh, we'll still go to the other amusement park (are you kidding me, I wouldn't miss it!), but I can honestly say I have a new park that I love, and that's Michigan's Adventure. I posted about it not long ago, & said we would like to go. Well, we did go, and everyone loved it.

The rides were fun! And plentiful. And the best thing was NO LINES!!! Well, some had little lines, but nothing worth mentioning, really. You could ride as many times as you wanted with no worries at all. We rode Shivering Timbers several times. Look at this, I think it's the longest roller coaster I've ever seen, and it was awesome!!


There were other coasters there too, including one that rode under the track and went upside down. 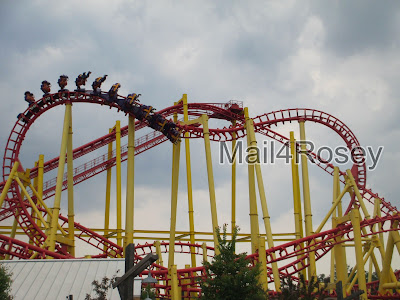 One of the beauties of an amusement park is that they please all ages. Michigan's Adventure was no exception. There were rides for all ages to enjoy, and some that we could all enjoy together. 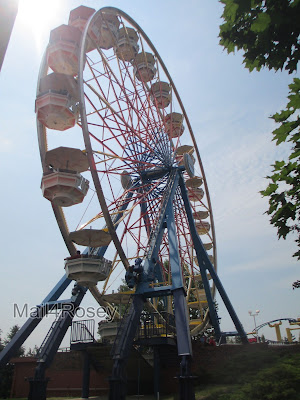 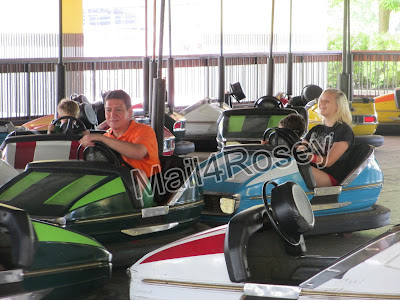 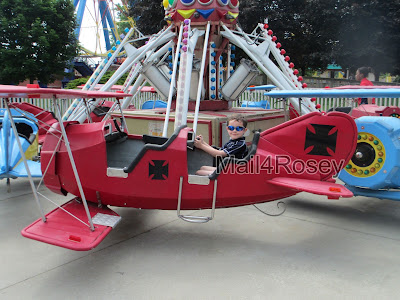 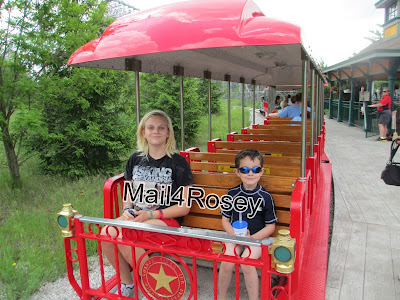 My daughter thought it would be a good idea to go on the Rip Cord. If you're not familiar with it, it's a ride that takes you high into the air and swings you on a cable. 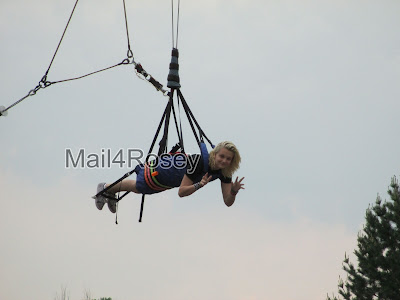 That's her below, that little dot way up high on the left. 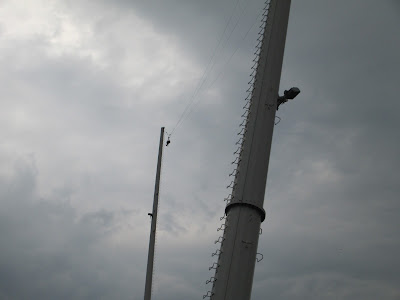 She thought it would be a good idea, even though it started to rain while she was in line. Nothing too hard, and no lightning, but a steady drizzle that got us all soaked. 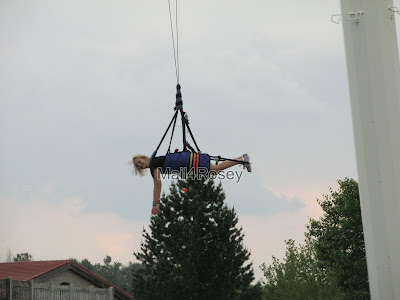 Speaking of water, and this is unheard of to me, there is also a water park (WildWater Adventure) inside of Michigan's Adventure. It's huge and admission is included in the $29.00 admission price. That's right, you get unlimited access, all day long, to the amusement park and the water park.

It was raining so we didn't play in the water park, but I did take a couple of pictures. 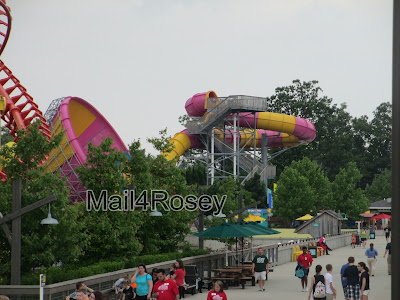 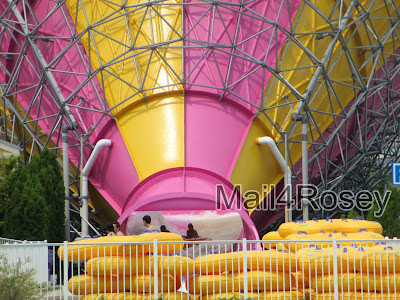 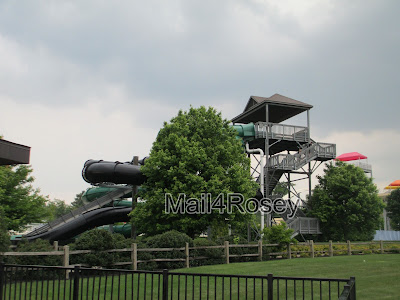 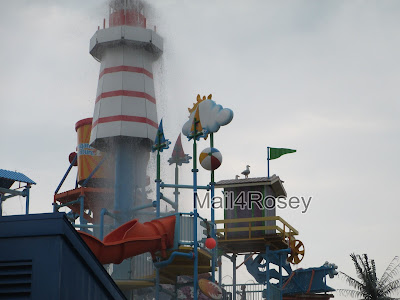 We had our lunch in the park at the Family Grill, which is an outside all-you-can-eat place, where you sit under covered picnic tables. There was a lot of seating, so that wasn't a worry. The food was good (traditional BBQ menu options) but the line was slow, so make sure you get what you want the first time around (don't do salad first and expect to go back for your main course) because you're not going to want to wait in the line more than once. They also had ice cream for the kids (adults too if they wanted it), so that was a big hit. 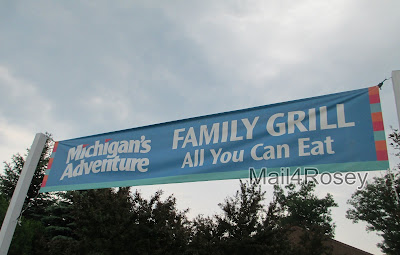 After lunch we changed into dry clothes and since the rain had then stopped, we went out for more rides and amusement park fun. 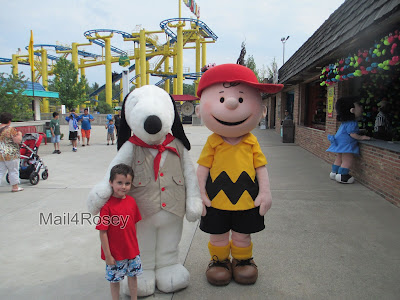 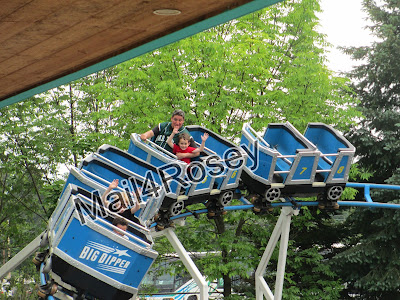 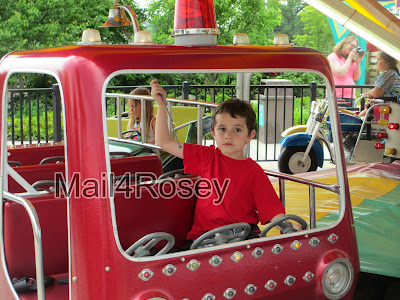 We had a great time, and I'm telling you it's changed my way of thinking. I fully intend to explore other parks now. We do have guests from time to time who we end up taking to the amusement park. I think instead of traveling to the next state over (like we've always done), we'll take them here instead.

Like I said, I still love the other park, and probably always will, but there's something to be said for being able to actually ride the rides!  At the other park you have to pick two or three coasters and stand in line for hours to get to ride them. It's fun, but the lines aren't (maybe that's my age talking). The other thing I noticed is Michigan's Adventure employees are all friendly and kind. No one's stressed out and grouchy from too many people making too many requests (big crowds will do that to you). 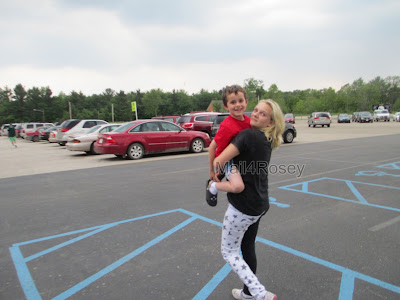 We ended up leaving a couple of hours before closing time just because the threat of rain was so imminent. It turned out to be a good choice too because it started pouring not too awful long after we got into the car.

If you're in the area, and looking for a fun place to visit, I highly recommend Michigan's Adventure.  You can learn more about the park by reading their website here: https://www.facebook.com/miadventure