Okay, so this was a game to see. We like to watch any NBA game, but they are especially fun to watch when they have a close score. The last quarter of this game was a real nail-biter. Each team was back and forth with every play and there was no telling who was going to win. 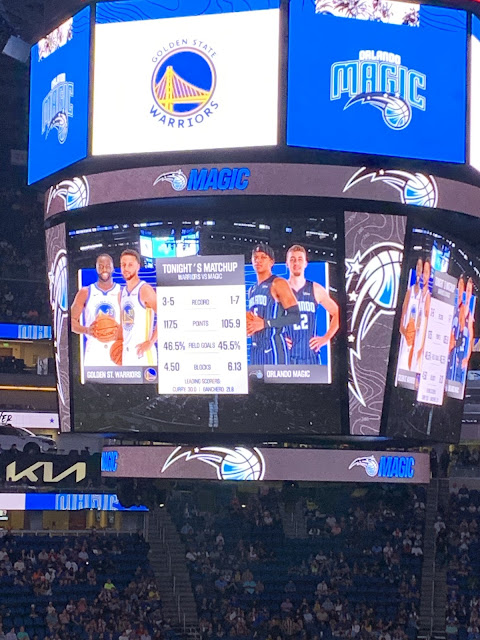 This could have been a buzzer beater for either team and Orlando Magic walked away with the win.

Well, we live in Florida and we are fans of Orlando Magic, but my son's favorite team and players were in the house. We got to hear the crowd roar when Stephen Curry came out on the floor. We got to see Klay Thompson's perfect form in person, and it was spectacular from the get-go (we noticed him right away in warm-ups, he really does have a pretty shot). Not to mention Draymond Green, Andrew Wiggins, Kevon Looney and Jordan Poole were on the court. Talk about a teen floating around on Cloud 9. It's not likely we're going to make our way to California any time soon, so a big thank you to Amway Center for bringing them to our side of the country. 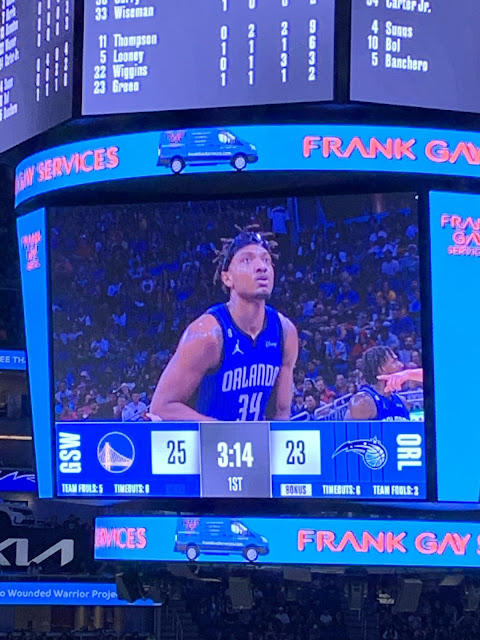 The fouling in this game was rampant and arguably led to the demise of the Golden State Warriors who did not walk away victors this time. Not everyone agreed with all (some were clearly warranted) of the fouls the refs called. At one point, even some of the Magic fans were scratching their heads and wondering what was going on. Technical fouls were flying too, including one for the Warriors' head coach, Steve Kerr.

line a staggering 46 times against a Warriors defense. 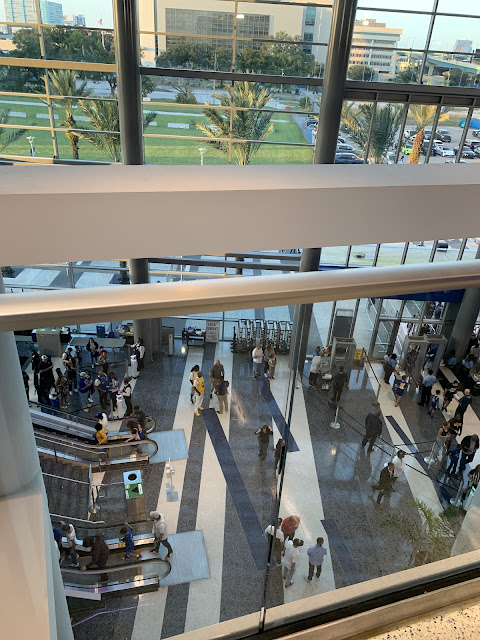 Can we talk about this arena? The Amway Center in Orlando, Florida is so nice. Everything is clean and feels modern. The layout is crystal clear (not confusing) and there is not a bad seat in the house. It is a great place to watch a basketball game and would be most excellent for seeing a concert. 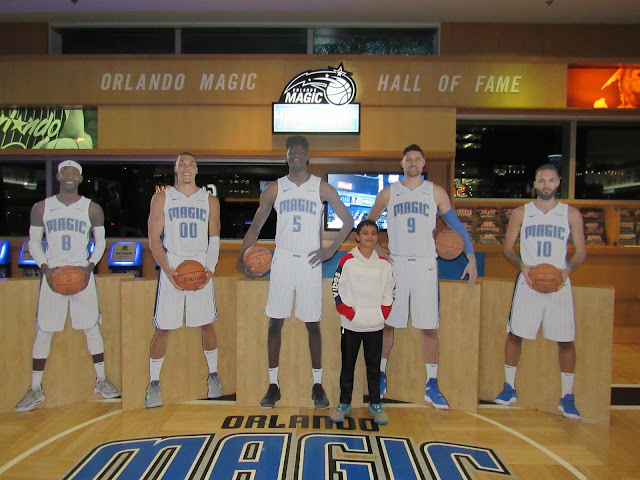 This was taken 2 years ago (when he still liked to smile for pictures). 😁

They also have interactive displays around, plenty of food and drink stops (the food was good too) and a memorabilia area that is fun to visit. In the picture above and below you can see how my son has grown over the last couple of years. The picture above is one we took in 2020 and the one below is from yesterday (2022). It's hard to believe that in just a two-year time he went from a 'little kid' who loved to smile for the camera, to a teenager who only does so on rare occasion. 😊 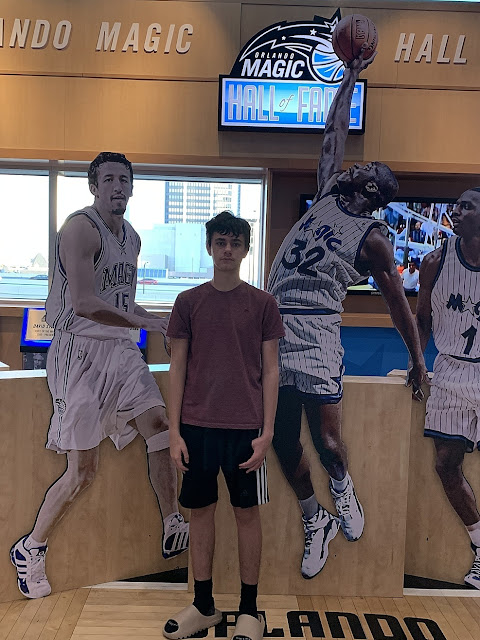 I like the picture comparison. Even though all things are not equal (only one photo cut-out has his foot on the ground in the second one) you can still see how much he is growing. His hope is to play basketball in college, so he wants to keep gaining height. He looks so tall in real life (he's towering over me). 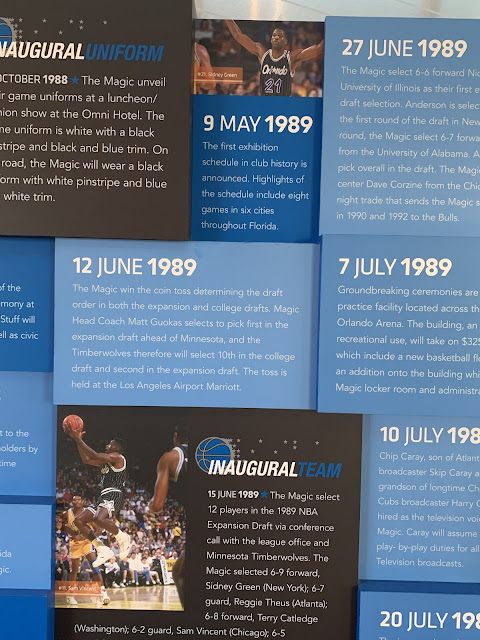 I like this area that touts the accomplishments of past players and teams. It's interesting and they keep everything nice and clean (and safe!) by putting it behind glass. My favorite part is hearing my son run through his knowledge bank on what he knows about the information we are seeing. 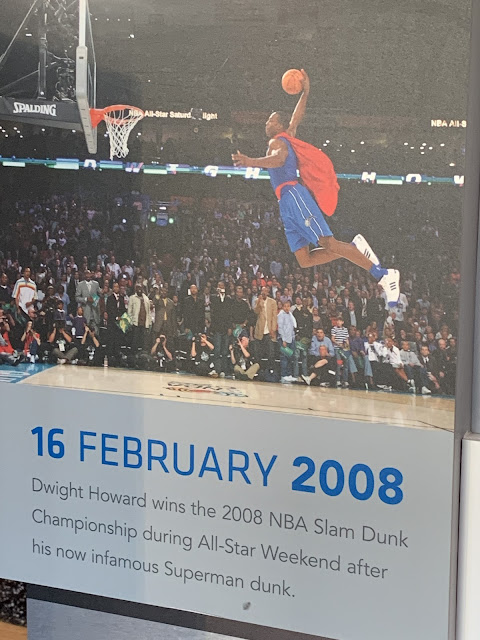 He gets excited when he sees a jersey from a player from the past that he likes, or sees a headline from a story he knows a little bit about. His love of the sport is strong and has continued to grow for half a decade. 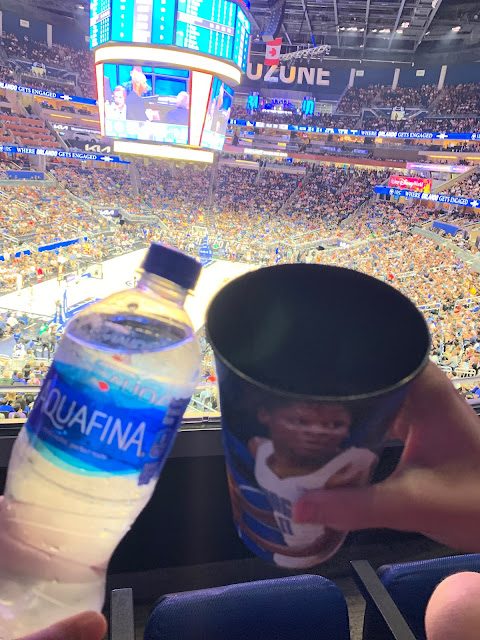 It's fun to watch my son play, and it's fun to watch him enjoy an NBA game. Of course, I enjoy watching the games too. There is no better place to watch a game than Amway Center. If you're in town, I highly recommend taking in an event at this arena. 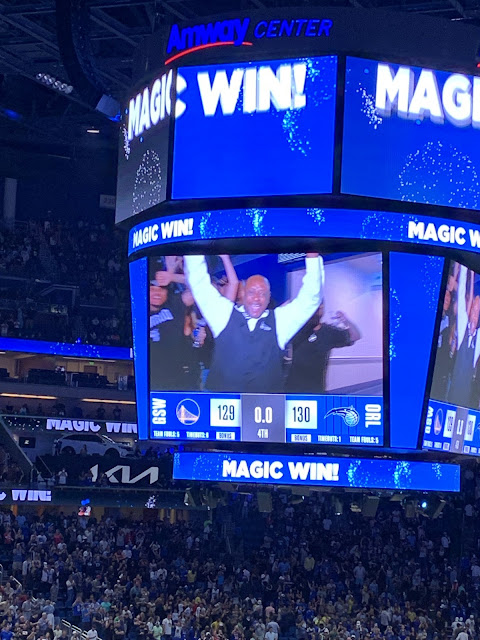 Congrats to Orlando Magic on their win! 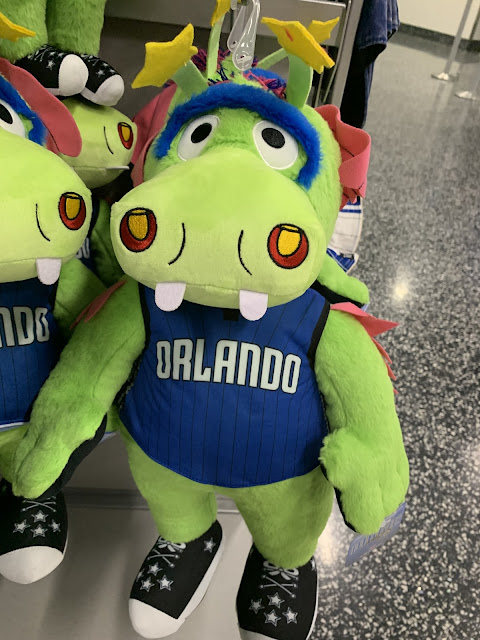 Don't forget to visit the shops while you are at the stadium.
This little cutie mascot is just right to put under the Christmas tree
(right alongside some tickets for a game I know my son will want to see in February).

If you're looking for a great Christmas gift idea, and I always am...

NBA tickets for a basketball fan are always a smart idea.

Gifts that create memories for the win.

Our 2 Florida teams are playing each other at Amway Center in February. I'm going to purchase tickets and put them in my son's Christmas stocking. That'll be a fun game for us to watch, just because the rivalry is so good. Wait...is that an oxymoron? Can a 'rivalry' be 'good?'  Maybe we'll get tickets for the whole family and make it a family event.

Learn more about the Amway Center in Orlando, Florida.