One Night in Theaters Only! It's Christmas Again (Nov 29)

Many thanks to Mapelle Films for providing a sample of the product for this review. Opinions are 100% my own.

"It's Christmas Again" will play in theaters for one night only, November 29th, but you can buy your tickets now (see end of post). Note: This post also has a $10 Amazon Gift Card at the end, a courtesy from the sponsor, thanking you for your visit.

I just saw the movie in a special pre-screening today. It's good!

A typical but somewhat surly and very self-absorbed teen, Jacob, can't understand how being humble would make a difference for anyone and tells his girlfriend, Abigail (who got roped into being Mary in the church's nativity play when the former lead catches chicken pox) he can't be the missing shepherd in the play because he's got a party to go to. He tells her if he sees a magical star in the sky, he'll follow it.

The girlfriend tells him to look up, that there are a million magical stars in the sky and when he does, a man opens his car door and he slams into it on his skateboard. The window of the car door immediately crumbles in a pile of glass that is surrounding the teen, who is now knocked out on the ground with the children from the nativity, and their teacher, praying over him.

He ends up in a dreamlike state where he IS a shepherd headed to Jerusalem for the census.

The dancing is very modern and the setting is just as you would imagine it during Jesus' time. The stark contrast is nice. It grabs the attention of our youth because it has modern elements (the way the students dress, talk, dance, etc.).

As the story progresses the surly teen becomes subject to others, in the new setting, who had his previous attitude and finds himself defending the core beliefs of the savior arriving as a baby.

There are lessons to be taught, including one that I learned. When the three kings came to visit the baby Jesus, they brought gold (for a king), frankincense (for a God) and myrrh (an embalming oil). Abigail expresses her wonder as to why they would bring myrrh to gift the child.

When Jacob wakes up from that dream, he ends up in another one and it lands him home with his familiy in a town that doesn't have church, doesn't decorate, and just 'skips' Christmas, like Jacob wanted to do at the start of the movie when his brother fell off of a curb and got hurt, ruining their family skiing vacation.

In the new dream Jacob begins to understand that though he thought he had all he wanted in his previous version of himself, and that helping others was not worth the effort, he was wrong. He misses Christmas, the church and understands the value of altruism.

Jake befriends Joe, someone he previously ignored entirely, finding out he is an 18-year-old orphan who aged out of the system and now has no place to stay. He gives him a hot meal, a room in his home and he has a discussion with him about righting wrongs.

Joe ends up leaving without saying goodbye the next day, and Abigail tries to get Jacob to go on a skiing trip with them. Instead, Jacob wants to stay and celebrate Christmas, something no one does anymore. Abigail agrees to stay, and they find Joe (decorating the town with lights for Christmas) but she's not at all happy with the changes in Jacob. She says people will find him 'weird' because he wants to celebrate Jesus' birthday and all that goes along with it. Abby has turned into the one who thinks nothing can make a difference. 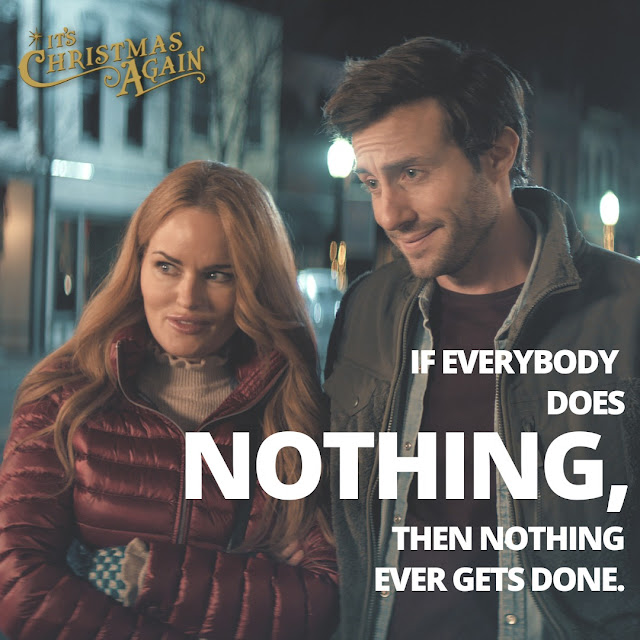 They go on to help others and realize how fulfilling it is to do so. The theme of the movie is summed up in a saying Abigail's dad always says, "If everybody does nothing, then nothing ever gets done," and Jake comes to understand that while things we do won't matter to everyone, they will matter to someone.

"It's Christmas Again" with your family. The movie is playing for one night only.

airing for one night only in local theaters (Nov. 29th). 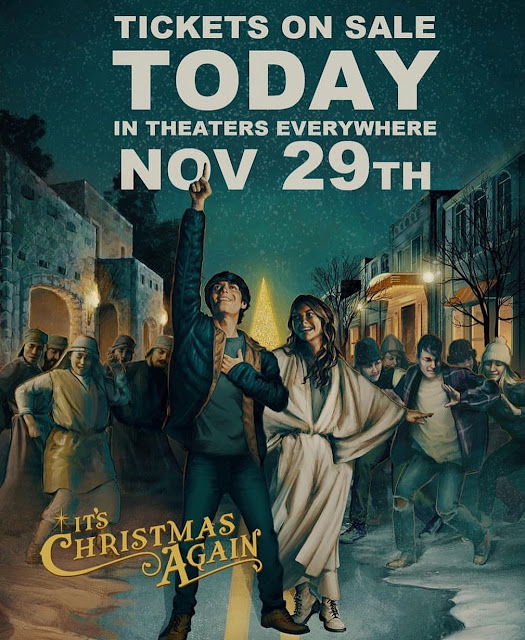 CLICK TO BUY
THERE'S A GIVEAWAY!
To thank you for visiting, the sponsor is offering
one lucky winner a $10 Amazon Gift Code.
a Rafflecopter giveaway

Bonus: There is also a sign up sheet if you'd like to host a movie showing at your church.

I passed it along to our pastor's secretary, in case they'd like to join in.

We've had 'movie nights' at the church before, and I think this one would be awesome for the holiday.