Send Your Kids To PGC Basketball Camp? Yes! Please Do! 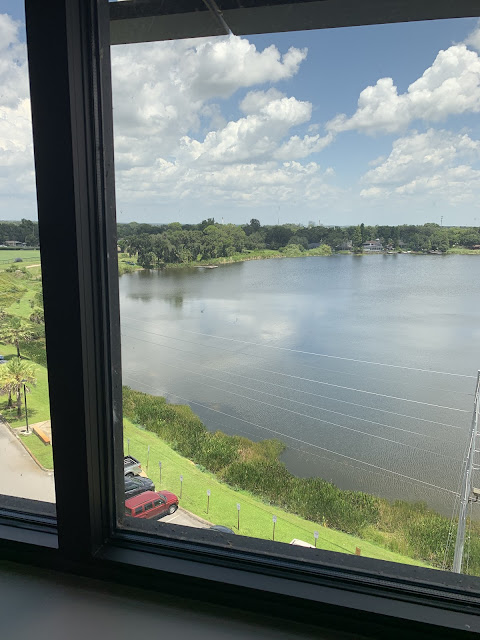 The View from the Dorm Room
Imagine being with a group of kids, in your own age range, all with the same common interest of playing ball. Now add coaches who care about you, want to help you improve your mental and physical game, and are part of an organization run by an owner who makes sure things are structured so that parents know what is going on, every moment of the day, even though they are not physically present. That's a recipe for success. That's Point Guard College.

We looked around at quite a few camps before deciding to go with PGC Basketball. This is the one that had far and away the best reviews, and it had been running for quite some time.

Once the decision was made, signing up for it was easy. We did it online, and then the information on what to expect was sent to us very quickly. A list of what to bring to camp was e-mailed, and a schedule was sent to parents. There were FAQs answered, and e-mails answered immediately if questions arose.

Now that we have experienced the camp, I would also suggest the following: 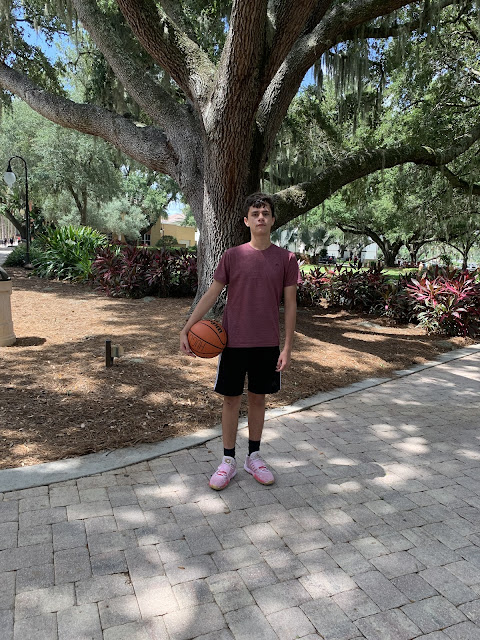 The campus we were on was so pretty.
PGC Basketball camps run all over the United States,
so it is very likely there is one located close to you.
What to Expect:
There are several kinds of camp to choose from...day camps, overnight camps, Point Guard Camp, Playmaker Camp, Shooting Camp, etc.
Kids have classes, gym time, and meals. They do not spend a lot of time in the room where they will be sleeping. For us, that was a dorm room that slept 8 kids (four on each side) and a bathroom with several stalls and showers.
Class Time: Students are expected to have a notebook and something to write with, for every class. Students learn the importance of a positive mindset, how to be a positive influence on their team, etc. They also hear success stories of others who have been a part of the PGC Basketball in the past.  Students are not allowed to leave the classroom. Safety is paramount to the directors and this is enforced.
Gym Time: Students get play time with a coach, and with each other. They perform drills, learn from one another, and get fair evaluations along the way. Each child is made to feel special while on the court. Again, safety comes first and students are not permitted to leave the gym.
Meals: Students and counselors eat together in a restaurant. There is a buffet of sorts set out and they select what they want to eat from it. Drinks are bottomless and varied (something my said he appreciated).
Room Time: Students retire to their room for the night. There are adults close by, but not in the rooms.
Note: there are day camp options available if you don't want to leave your child overnight. My son was enrolled in the four-night, five-day overnight camp.
Students come from all over the world (my son had someone from Germany in his room) and all over the United States to participate in these camps.
When we were taking our elevator to the dorm room on check-in day, all of the parents on board were assuring us (first-time attendees) of how great it would be. Everyone had been before, most of them mulitple times, and the woman with the wagon full of things (cases of water, snacks, bedding, etc.) said it was her sons SIXTH time enrolling and that her older son had been dropped off at a different PGC Basketball camp in another city the day before. All good signs that my son was going to have a quality camp experience.
Parents had already been e-mailed a schedule of what their children would be doing every moment of the day, each day they were there. Things were moving along just as planned. 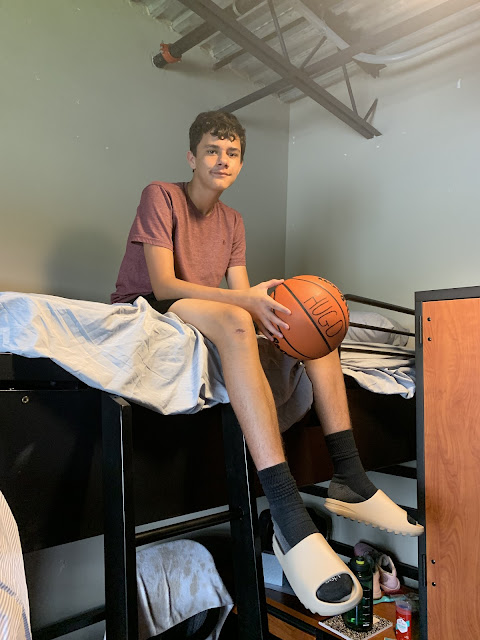 I did laugh at him struggling with the fitted sheet.

We had ample time to get my son situated in the room before his first class began. We set up the bed, and the desk underneath him, got his charger plugged in, so he could keep his phone charged when he got back to the room and hung the laundry bag we packed for his dirty clothes.
Then we headed down to the common area. Kids were shuttled off to a classroom (no one could get in but camp counselors and the kids). A sign-in sheet was checked to make sure everyone was where they were supposed to be.
Parents were gathered for a 'meeting' which I think was brilliant because it got us all away from our kids to stop fussing. "Do you have this?" "Do you need this" "Don't forget to text."
And because the 'meeting' was so short, I was certain it was really just to get us out so they could focus on the kids. ;) 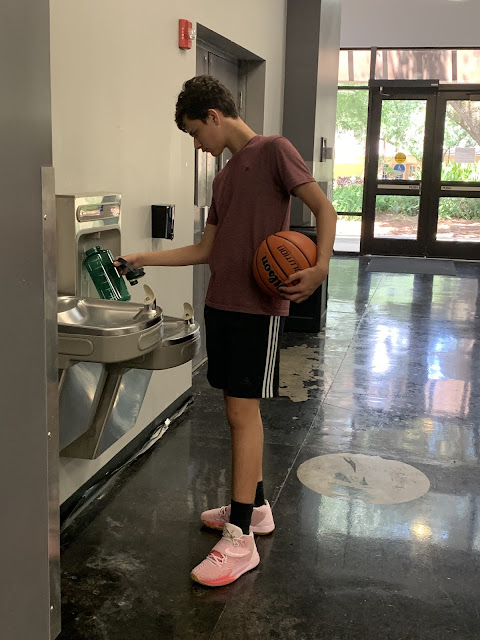 The pink shoes.
He owns a dozen pairs of shoes but these are the only ones he wears on the court.
As I headed out to my car, I was flooded for a minute with emotions. On the one hand, I was super proud that my son was going to have some freedom and independence (his first time away from family since he was born). On the other hand, I was a little concerned that I would be so far away (a few hours away, to be exact). I'd considered getting a hotel room for a week close by, but I wanted this experience for him to be authentic, so I headed home.
Turns out, PGC Basketball knows what they are doing. They make sure kids are grouped by their ages, and in numbers small enough that everyone feels like their instruction is very personalized.
In the room, kids all have something in common before they ever arrive (a love of basketball). The ONE thing I would have done different in hindsight, is have a friend of his enroll too. There were two groups of kids in his room...one was brothers and a friend they knew and the other was a group of boys who already knew each other and had enrolled together (including the child from Germany).
Though camp was a great experience for my teen, I believe it would have been that much better if he'd have had someone along that he already knew. That's my own personal tip, if you're considering sending your child (and I highly recommend that you do!). Some kids blend in seamlessly no matter who they're with, others are quiet observers (and that has always been my son, even when he was little).
The classes were broken into chunks of time that allowed them to be useful, and something to look forward to (rather than being a chore, like classes can sometimes be viewed by teens). My son brought home his notebook and it is full of tips he can keep to refer back to at a later date. All valuable information, much of which can continue to help him in the future.
And most important to him (because let's face it, the gym is where it's at) he has some new skills to use (mental and physical) on the court.
Other points of interest:
My kiddo is always looking to improve his game, and PGC Basketball camp was a great way to help him do so. If you're looking for a basketball camp for your children, this one is easy to recommend.