Disclosure: I received a sample product or a discount code to make a purchase. All opinions stated are genuine and my own. 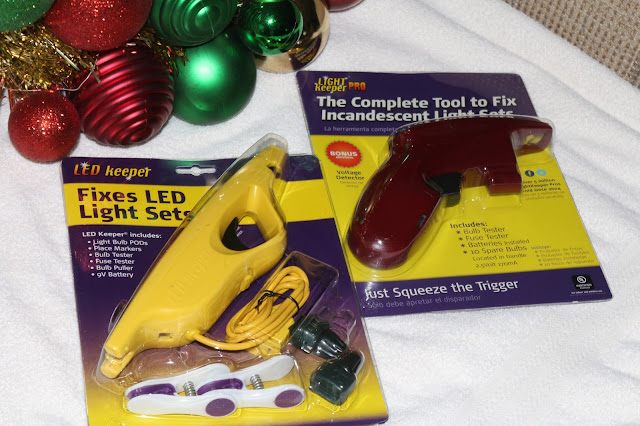 There are a couple of things I have put off during the holiday seasons that I wanted to get right this year, and what better time than July, you know, with the whole 'Christmas in July' thing going on. So, I made a promise to myself that I was going to do two things before the official holiday, so I wouldn't keep saying I would 'get to it' even though I knew I probably wouldn't. One, is I took out my bulb tree and bulb wreath, along with the ornaments that have fallen off, and I am putting them back in place. The second thing is I ordered the LED Keeper and the LightKeeper Pro.
I'm so happy to have my decorations repaired (it's a sense of relief that I finally did them) and am delighted to have the light repair kits in my possession now as well. It's so difficult to find a broken light on a light strand that adorns the Chrsitmas Tree, and sad to say I am one of those people that will just throw the lights out, rather than spend a lot of time trying to figure out which bulb needs to be replaced so the strand will work again. What I didn't think of on the occassions where I have done that, is that those light strands end up in a landfill, along with a bazillion other strands from people who have done the same thing.
Ulta-Lit Tree Company mades these little gadgets that identify and fix the broken stents quickly. Over 6 million people have purchased them in the last 20 years, and saved enough light sets from landfills to fill six Statues of Liberty! Add me to the stats because I've got mine and this year I'll be ready to fix those pesky bulbs that blow. Even more important now since the lights on my new spinning tree (does anyone remember how excited I was to get a spinning tree, lol?) are already laced. I was worried last year what I would do if one blew, and I meant to pick these up. I didn't, and thankfully didn't need them, but I do now feel prepared, having them in the house.
I may pick up a Christmas ornament or two this month (there's one that depicts London that I have been wanting to get and I wanted to pick up a housewarming ornament for a friend who purchased her first home). So with those two purchases and these repair kits, I have officially become a part of the Christmas in July crowd this year.
Learn more about the LED Keeper and the LightKeeper Pro by clicking HERE. And if you're one of those people who hates to search the strands of lights to find the one bulb that blew out, pick up yours today. Come the holidays, and they'll be here before you know it, you'll be glad to have them on hand.
on July 09, 2021