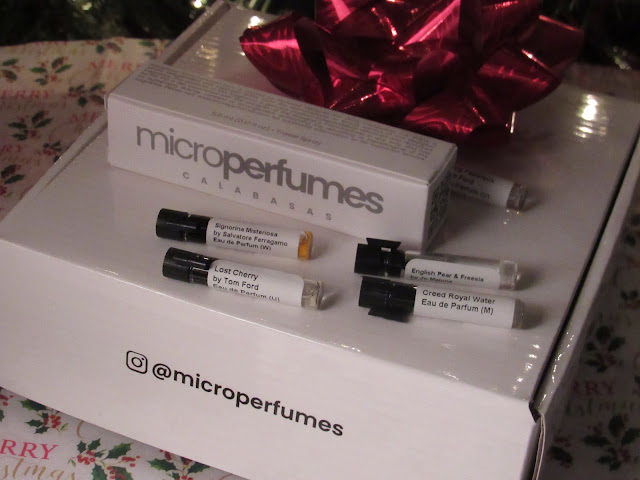 I ordered a second shipment of fragrance samples from MicroPerfumes just as fast as I could after opening the first one, because it's really fun for me to try the new scents. I'll list the names here and the notes at the very end of my take each of the fragrances, for anyone who is interested. My first shipment had all good scents, and this one did not, but that's okay. That's the reason you TRY BEFORE YOU BUY (reminding myself, not you...well, you too, if you need it). :) I did find two fragrances that I love enough to purchase the full-sized bottles, so I also consider this shipment a big win.

1. Jo Malone: English Pear and Freesia
2. Salvatore Ferragamo: Signorina Misteriosa
3. Creed: Royal Water
4. Jo Malone: Orange Blossom
5. Tom Ford: L Cherry
6. Tom Ford: FS%&#ing Fabulous
Those are listed in the order that I liked them, with #1 being the best (and I loved #1!). What's with some of these names though? Gah. These fragrances have all been hyped on the Internet, so I was curious to try them. I'm kind of glad I didn't like #4 or #5 because I don't want to display those names on my dresser, lol. I'm not a prude, I swear, I just don't like that language much (eek, that's a little like a prude, geez).
1). Just to discuss them briefly, the Jo Malone English Pear and Freesia is fabulous. It is unlike anything I have ever smelled in a perfume, which is always a big plus for me. It is a unique and fresh scent (very crisp) that smells a teeny bit like fabric softener, but in a classy and elegant way. It also reminds me of my trip to London. I'm not sure if that's a mental thing because of the word 'English' in the title or not, but it is still absolute fact. I will definitely be purchasing a full-sized bottle. Top notes are Pear and Melon; middle notes are Freesia and Rose; base notes are Musk, Patchouli, Rhuburb and Amber

2). The Signorina Misteriosa by Salvatore Ferragamo smells delicious. It's a little like grape gum at first and then a soft floral dry down that has a rich vanilla type of scent. I really enjoy wearing it, I did turn around and purchase a full-sized bottle because I found it for such a fabulous price. Top Notes: Wild Blackberry, Neroli. Heart Notes: Orange Blossom, Tuberose. Base Notes: Patchouli, Black Vanilla.
3). Royal Water by Creed had me interested. Let me tell you why...Creed Aventus is THE best smelling men's cologne I have ever smelled in my life! Also, Santal Original sold my oldest son, so a big, hearty bottle of it was one of his favorite Christmas gifts this year. He texted me twice to tell me how much he enjoyed it while he was wearing it for the first time, so with those two experiences, it is safe to assume this house knows how to make a wonderful fragrance . This one, Royal Water, leans a tiny bit feminine to me, though it could definitely be worn by a man too. It is marketed as being unisex. It smells really good to me after dry down. It is a creamy musky scent. I'd be happy to own and wear it. It is very light, not intense smelling. It's not my favorite (nothing beats Aventus) but I like it. Top notes are Citruses and Mint; middle notes are Juniper Berries and Basil; base notes are Musk and Ambergris. 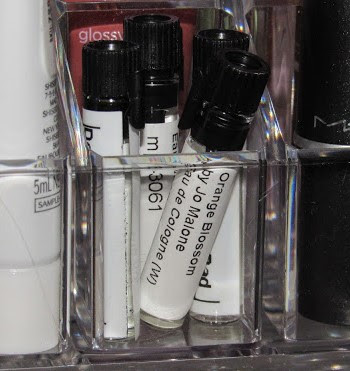 4). Jo Malone's Orange Blossom is nice enough. Pleasant. Nothing bad at all. It's just pretty common smelling and I like the English Pear and Freesia from the same brand so much more. I do smell a tad bit of a nice citrusy orange smell (like the fruit) cutting through though, which is nice. I however, am not likely to purchase a full-sized bottle. Fun fact: When I was looking up the notes, I read that Kate Middleton, Dutchess of Cambridge, favors this scent. The top notes are cedrat, green notes and clementine leaf. The heart is composed of orange blossom and water lily, while the base of orange blossom and lilac.
5). Tom Ford's L.Cherry: This is unisex. I think it is more for men than women. I like the opening notes where it smells a lot like cherry. The middle is a little bitter and boozy. I don't care for the mid. Then the dry down is much softer, but outside of the opening spray, this one really isn't for me. Cherry, Cherry liqueur, Bitter almond Heart Notes Cherry syrup, Turkish rose, Jasmine sambac Base notes Peru balsam, Roasted tonka bean, Sandalwood, Vetiver, Cedarwood
6). F&$S%ing Fabulous: Everyone raves about this on YouTube, so despite the name, I was excited to give it a try. What a disappointment. This one kind of smells like cannabis to me (yuck). I don't like it. Definitely not fabulous-o to me. Tom Ford: Fabulous - Almond Bitter Oil, Tonka Resinoid, Orris Accord, Cashmeran, Leather Accord, Clary Sage Oil
So even though 3 out of 6 won't be purchases that I make, I still consider this haul a hit because I found two new perfumes that I absolutely love...one that I already purchased, and one that I will be getting sooner rather than later.
MicroPerfumes is a wonderful site for testing designer and niche fragrances. They also have fast shipping, AND bigger letters on their samples than some of their competitors. I like the bigger font so I don't have to squint and try to guess what I'm wearing. The bottles open pretty easily as well, while still staying tightly closed when you don't want to use them. I am a big fan of MicroPerfumes. I will be ordering from them again soon.
on December 30, 2020