We Did a Drive Through What?! 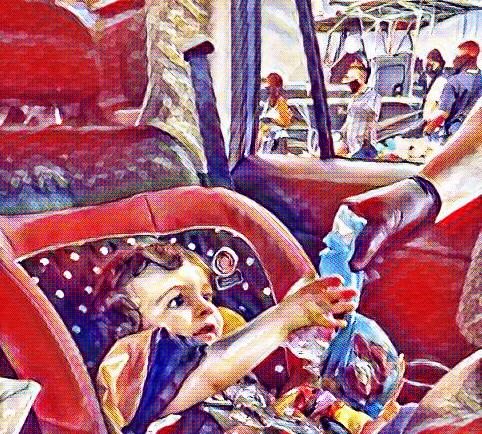 Imagine a world where change was sudden and swift, and many of the norms you knew, became undone faster than the blink of an eye. I suppose you don't have to because that's what we have been living for almost this entire year. When the pandemic started, I kind of thought it would come and go, but here we are, November 1st, 2020, and we are still being grossly impacted by Covid-19. Why is this news? Well, it's not, but the drive-through trick-or-treating we did yesterday really hit home for me. No fancy costumes to parade around in, no kid-themed Halloween parties, no running into friends at the big community party, no bounce houses, no petting farm, no trick-or-treating door-to-door (or trunk to trunk), and so on and so forth.

At first, I thought we probably just wouldn't do anything at all, but then I reconsidered because traditions are one of the many concrete columns of childhood. So, we piled up in the car, my daughter and her family behind ours, and headed through the trick-or-treat drive through line being hosted in our city. The line to get in was longer than the line to get goodies, but the sentiment was still appreciated. Though they didn't put up their typical displays, they did have a few... and no, there weren't a lot of costumed people hilariously trying to maneuver in their costumes (ever see a dinosaur try to dance?) to the live music that was playing, but there was still a DJ cranking out tunes like "The Monster Mash." What would Halloween be without "The Monster Mash?"

The funny thing is, this was the first Halloween one of my granddaughters was old enough to enjoy, and she didn't give a hoot about the lack of normal tradition because to her it was of no consequence. People were handing her wrapped bags filled with goodies and she couldn't have been more delighted. I don't think she even knew there were sugary delights in the little bags, she was just thrilled to have things being handed to her through the car window, lolol.

My granddaughter has a way of reminding me that everything around us is fascinating, and can be easily enjoyed. In fact, her idea of being 'mad' is to give you a look (and boy, is it a look, and it is so very cute) if she cannot get her way about something, but then 15 seconds later, and literally it is 15 seconds, she has forgotten her angst and is laughing about something else going on around her. Like finding little flowers in the grass, or hearing her mom say, "I'm gonna get ya!" She is a delightful little peanut, and if the drive through trick-or-treating was good enough for her, then it was good enough for us.

Kudos to the local sheriff's office for always throwing a Halloween shindig for the kids. It was smaller than usual this year, much smaller, but that's not what matters. What matters is that they cared enough to do it at all. It's easy to throw in the towel and say, 'well, we'll do it next year.' But how do we know what will happen next year? If this year has taught us anything, it's that we don't. So, I've decided that we will be going all out for Thanksgiving and we will be going all out with our favorite Christmas traditions (or creating new ones as needed).  We are making a conscious effort to enjoy who and what we can in the moment, for the old saying, 'Who knows what tomorrow brings?' has never seemed to ring more true than it has this year. Happy November 1.