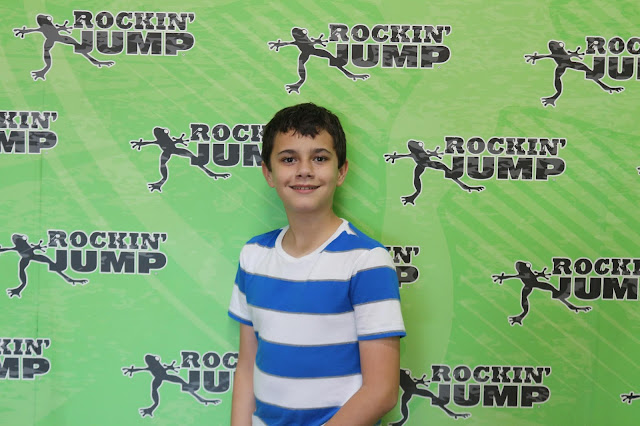 On our recent vacation to Myrtle Beach, South Carolina we did some things that I knew my youngest would love. After all, this was supposed to be his birthday celebration, but a hurricane headed our way derailed those plans, so I wanted to make sure the things we did would be special and memorable on this alternate and slightly delayed vacation. A trip to Rockin' Jump surely put a smile on his face. 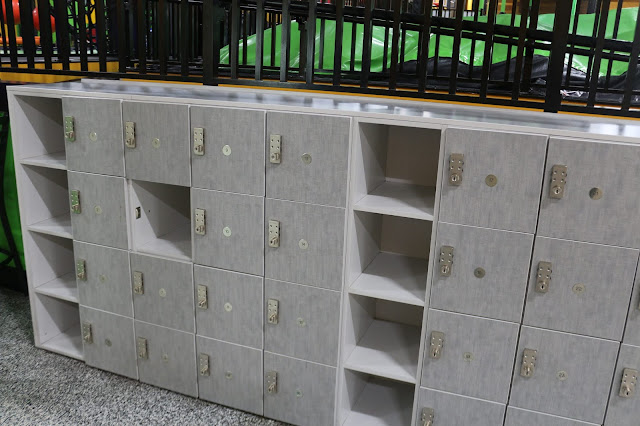 When you first walk in, there are lockers or shelves to put your shoes or personal belongings in, while you go to jump. 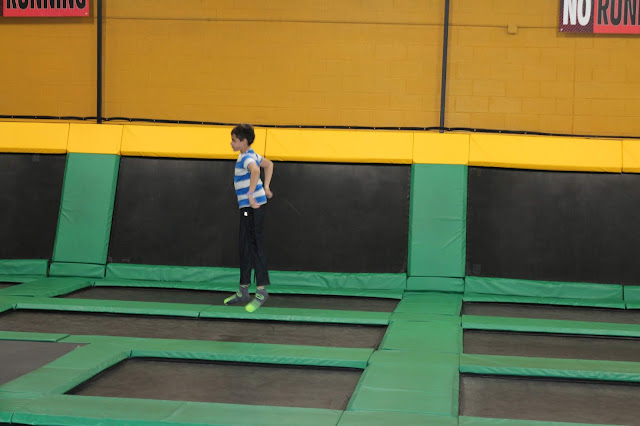 Quite a few trampoline platforms are spread out throughout the premises and since we were there first thing in the morning, we had areas pretty much to ourselves, since only a handful of people had shown up at that point. This meant my son could jump from area to area at will, and he surely had a great time taking full advantage of the pretty much open courts. 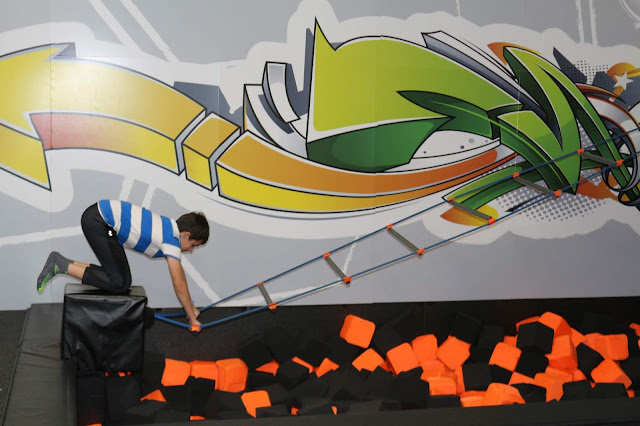 My grown kids try to climb these ladders at amusement parks, and usually fail, so my youngest was happy to see this one over a foam pit. Did he make it? No, no he didn't, and he needed help getting out of the pit. Hahahaha. 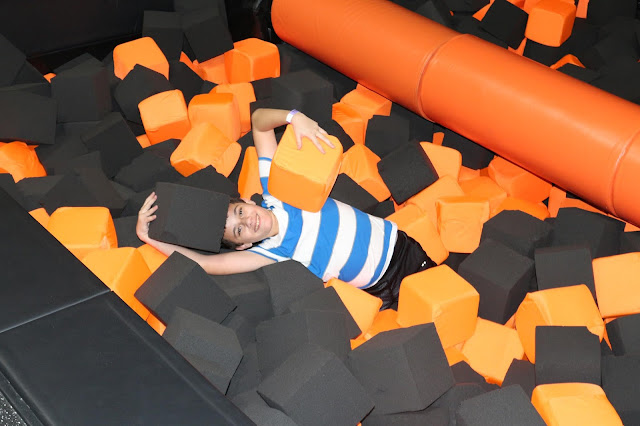 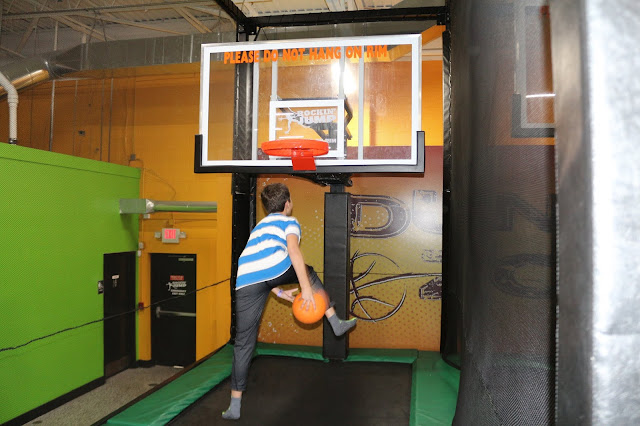 A good deal of our time there was spent at the basketball hoop. Jumping on the trampoline to make baskets was pretty fun for him, and even more amusing for me to watch. There were times he was laughing too hard to shoot. It's challenging to attempt trick shots while you are bouncing at the same time. 😅 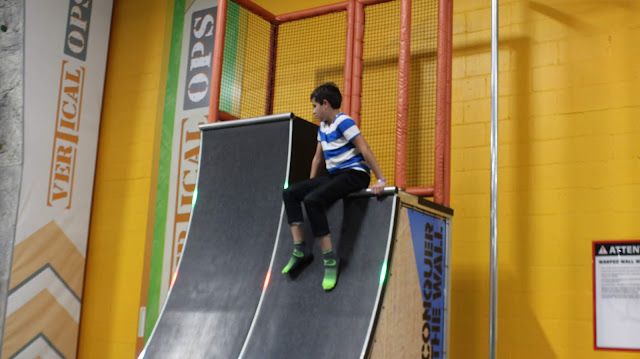 One of the new features at Rockin' Jump is this warp wall. You had to get up some speed and run the wall. Once up there, you could run back down or use the fireman pole seen to the right. One little boy slid back down, which I wouldn't have thought could be done, but he made it look efortless. Just to the left is a big climbing wall, but no one was manning it the day we were there (or at least not that early in the day) so little man (he's not so little anymore, I know) didn't get to try that out this time. It's a pretty big wall, much higher than the one he's sitting on, which was pretty high in it's own right. 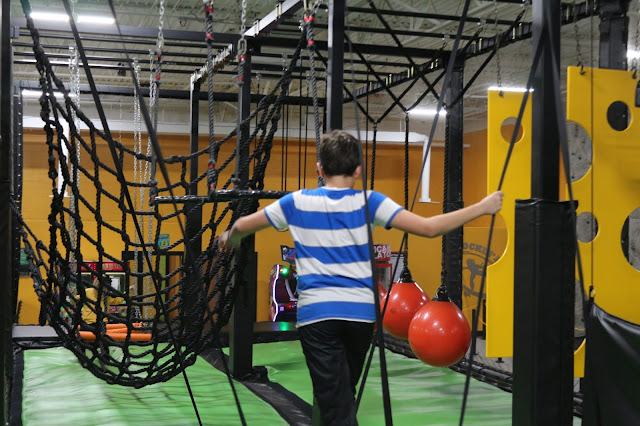 The obstacle course had trapeze bars, balancing, nets, swing rings, and big round balancers to swing on, or otherwise navigate, to get to the big yellow climbing structures that looked like swiss cheese to me. Those swung too as you tried to get across, making them challenging to conquer, but my son made it through unscathed (and without falling). 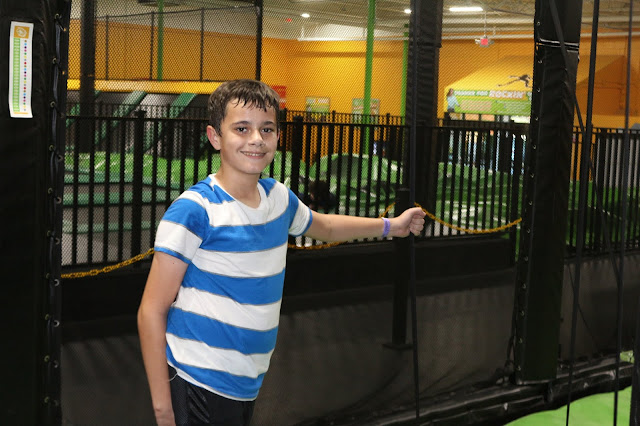 When he was done, he wanted to go again. I guess he liked it the first time around. 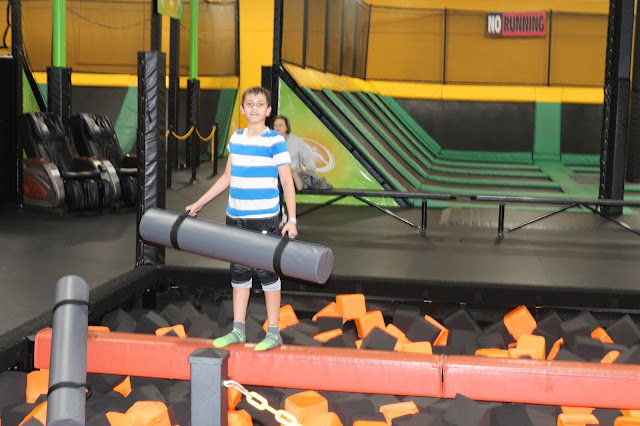 Battle foam was in the house too, as two contestants had to 'fight' their way across the beam. The one to not hold his or her balance and fall into the foam pit was the loser. This was not a fair fight. I am the bigger of us two. ;) 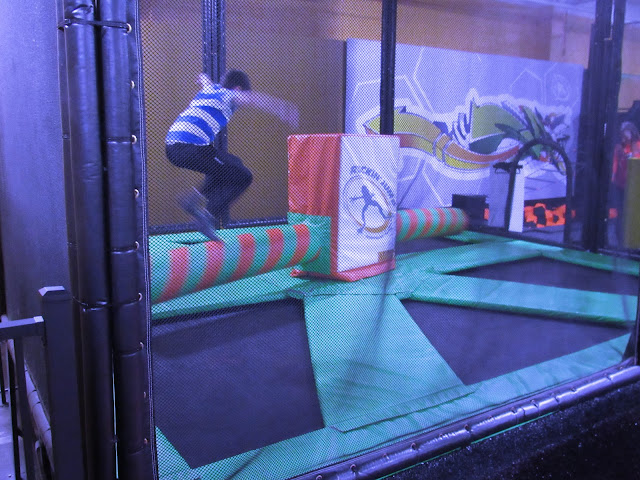 Here is one attraction I couldn't do if I tried. In fact, I'm at the age now where I can't even remember a time I would have tried, outside of being a child, lest I would fall flat on my tush and get hit with the bar when it came back around again, lol. Little man handled it like a champ though and made the jumps every time. 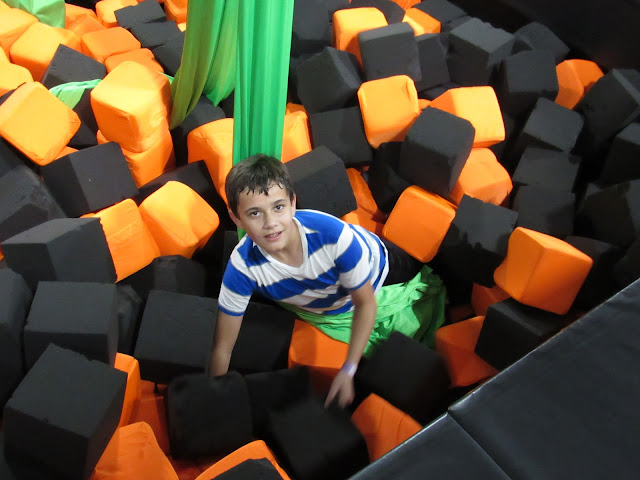 The silk ropes were great, but would take more time to master than the hour we opted to jump. An hour might go by very quickly, but in this case, it's an hour of vigorous exercise, so Mr. Sweaty Child was tired and ready to drink some ice cold water when it was time to go. One hour of jump time was plenty. Another factor playing into that though, is we went at a time when it wasn't busy. If he had to wait in lines to get on the toys, or jump on the trampoline, it would probably have been better to purchase more jump time from the get go. 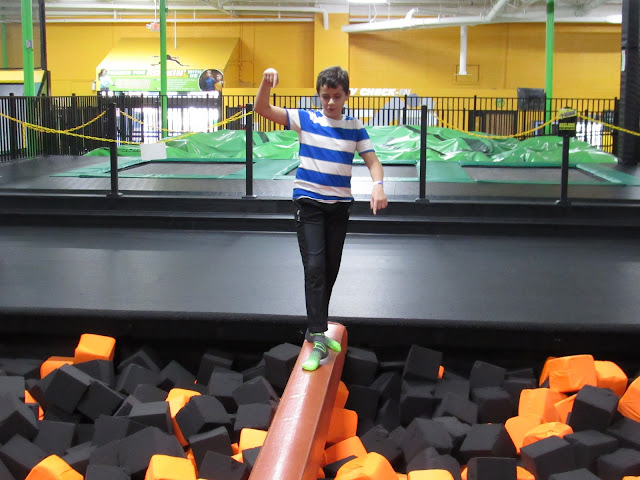 One more walk across the beam, and a jump into the parachute pit (seen behind him in green), and it was almost time to go. I do want to note that there is a dodge ball area that is netted off, to play in as well. No one was in there, so we didn't venture over, but if there had been we would have. That's always a fun game IF people play fair. 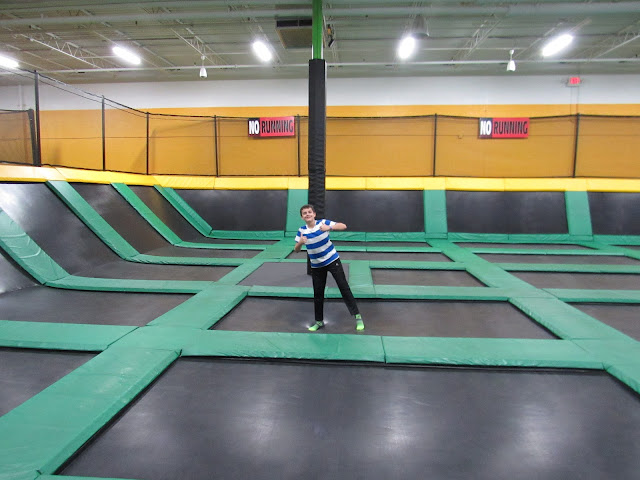 We finished our time there the same way we started it, by jumping on the trampoline floors. It's hard to see, but my son is holding two thumbs up in this picture. That pretty much sums up our time at Rockin' Jump. It was definitely a two-thumbs-up kind of place. For those who live in the area, this is not only a good place to visit, it's also an awesome option for throwing a party, with the ability to reserve a private room for guests (to serve cake, have a speech, open presents, eat, etc.).