Everyone knows my mom, Rose…as she’s the owner of this Blog. I’m her oldest son, Carmelo, and we took my daughter, Zoe as a complete surprise to her.  Days prior to the mini-vacation I informed my daughter that Grandma Rosey and I had a surprise for her but we wouldn’t tell her where or what it was.

Oh the agony as the week dwindled to an end, every day on the car ride home from school, in the evening, Zoe would try and guess pretty much the entire car ride each day. where it was we would be going.

Me being the dad that I am obviously played along, but made sure I got in a few laughs at the same time.  At one point Zoe went through the entire alphabet in attempts to guess the letter of what it begins with.  Well, unbeknownst to her, Daddy had other ideas.  She would say “A”… I was supposed to say yes or no.  Instead I took it upon myself to find a sentence for each letter that followed something along the lines of “Aren’t going to tell you, good luck!” “B” “Be wasting your time if you think I’m gonna tell you the surprise..” You get the gist.

Fast forward to Winter Haven, she figured it out on the car ride up, needless to say she was rather elated. 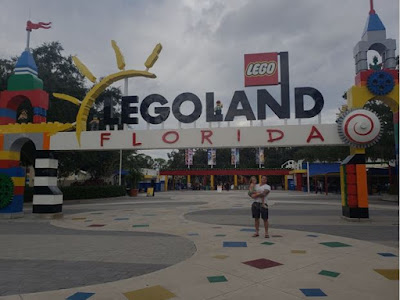 Here’s my beautiful daughter, the entrance is a prime opportunity for a family photo.  Uncle Josh was the camera man. 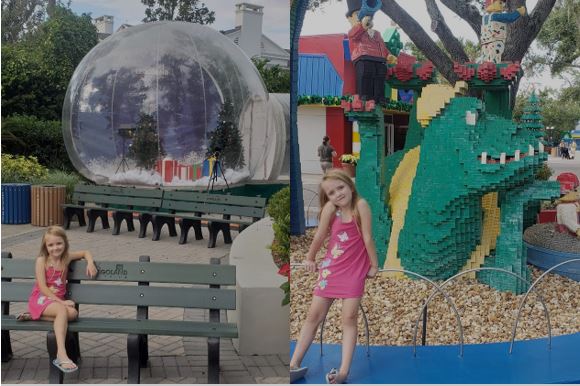 Zoe found some rather spectacular locations to pose for a quick pic.  She loved every single Lego masterpiece the park offered and we admittedly spent a good amount of time just admiring the craftsmanship.  The park is masterfully layed out and easy to navigate.  There are more attractions and locations to stop at within Legoland it definitely would take more than one day to get through the entire park.  One thing’s for sure, your pedometer is going to be hi-five worthy at the end of the day. 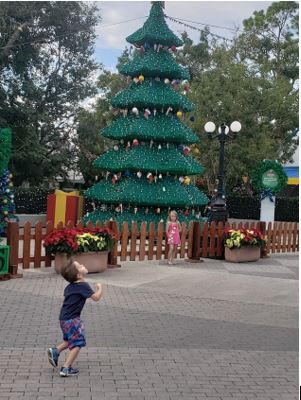 Randomly as I was taking a picture of Zoe next to this incredibly large Christmas tree this little boy went storming through my picture.  I intentionally chose to include this photo to show you the level of pure joy this park brings to the little ones.  You won’t have to worry about them staying up too late either.  Every single time we come here by the time I get Zoe into her car seat she says, “Dad, I’m STARVING!!!” and literally by the time I can look in my rear-view and tell her we’re going to get some food she passes out. Asleep and only willing to wake up for some food before she’s carried to bed. 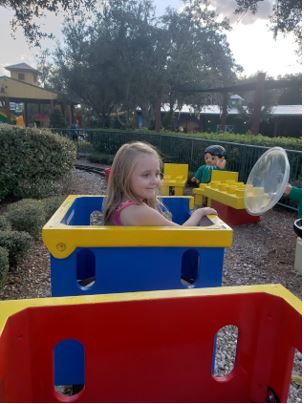 The Lego train was fun and one of the best things about this park is the lines are not long for anything.  Within a few minutes your kids are enjoying whatever game or experience they find interesting and you are there ready for the great pic!! Can you tell I like pictures?  I used to not take many, consequence of having a mom that takes more pictures than ever… the entire family has adapted and many times we make a funny face.  Come to think of it this is probably why she takes so many pictures.  We don’t make it easy for her to get one picture with all of the kids actually smiling at the same time.. (mother interjecting here with an *ahem* 😋) 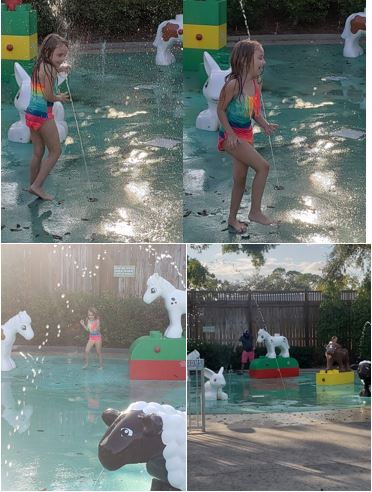 Unfortunately we went in December and the Water Park was closed.  We were looking forward to playing in the waterpark, however we found an alternative.  Zoe wore her bathing suit under her dress so when we found this gem. She quickly ran in and had a blast for a good 15 minutes. 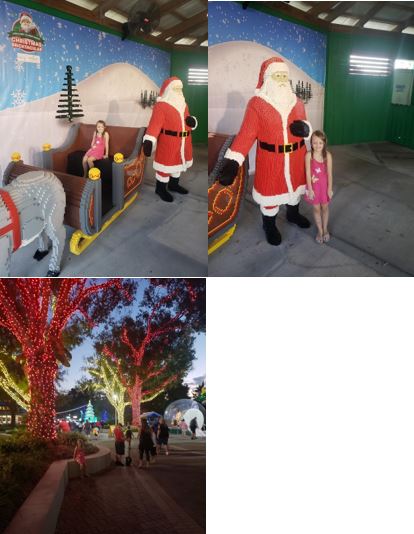 Being that it’s December I’d say Legoland did a spectacular job of “lighting things up” and bringing Christmas spirit to the warm state of Florida.  Their lights at night were breathtaking and my daughter was in awe everywhere we went.

I went to Legoland’s official website to get some facts for you guys. They’re laid out below:

The only Florida interactive theme park where LEGO® comes to life and kids take control.
LEGOLAND® Florida Resort is a multi-day vacation destination built for kids 2-12. Located in Central Florida’s Winter Haven, just 45 minutes from Orlando and Tampa, the resort includes an interactive, 150-acre theme park with more than 50 rides, shows and attractions inspired by popular LEGO® brands and characters, LEGOLAND Water Park and a world-famous botanical garden. LEGOLAND Hotel, located just steps from the theme park entrance, features 152 rooms and suites, each with its own LEGO theme. LEGOLAND Beach Retreat is a lakefront resort with 83 themed bungalows offering 166 separate rooms. Prices, times and schedules are subject to change without notice.

So what’s my analysis… Legoland is a great park to take the whole family to.  Legoland is way too big to see everything in one trip, which is great because you can have an entirely different experience the next time you go.  I would definitely recommend going to see Legoland.  I will be going many more times with my little girl.

I’m going to leave you with this. 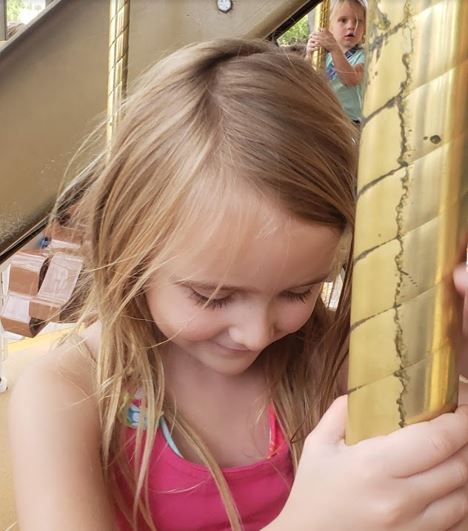 How can you argue with this joy?

The Christmas Bricktacular at Legoland is running every weekend through December. This spectaular Bricktacular is a holiday event for the kids that you won't want to miss.
on December 03, 2018