Ask this child if he likes country music, and this is the hearty laugh you will get. He's not typically a fan. He did, however, love these two albums, appropriately colored red and green despite them being by one of country's greats, Vince Gill. Why? Because they are filled with so many of his holiday favorites (my boy likes Christmas). I love them too, for many reasons, but most especially because Gill has a clear and pure voice that lends itself well to these seasonal selections. 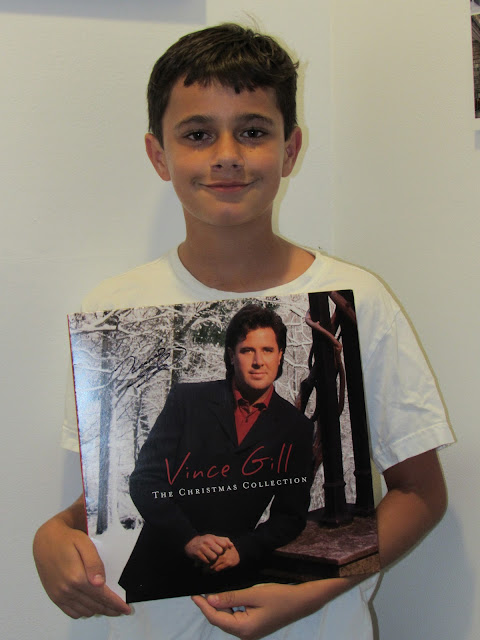 I like that that they are on vinyl because they bring back a bit of memory for me. When I was in middle through high school, my music collection was rivaled by no other (well, no other student...my mom and gran both had a ton of records).  I had the big stereo in a glass case that so many of us had...you know the one with speakers as tall as we were, and more records than I could count. I kept them alphabetized by genre, which made them easy to find, and music was on for me all of the time, even when I was sleeping. Both of these albums that have been put into this double LP set, were in my Christmas collection. They sound just as good today, as they did when I was a kid, and I am very happy to have them in the festive colors they are printed on now. Long live the phonograph. 😊😎🎄

I think these are a great way to bring in the holiday season, and I recommend picking one up the next time you are at your local Cracker Barrel. You can buy it online as well.

Vince Gill: The Christmas Collection has been released as a limited-edition, double-vinyl set available exclusively at Cracker Barrel stores nationwide. The MCA Nashville double LP includes 1993’s platinum, #1 Billboard Holiday Album, Let There Be Peace on Earth on green vinyl and 1998’s Breath of Heaven, recorded with the Patrick Williams Orchestra, on red vinyl. The collection includes such classics as “Santa Claus is Coming to Town,” “The Christmas Song,” and “Have Yourself a Merry Little Christmas.” The 21-time Grammy award-winning artist also lends his voice to Elvis Presley’s 1957 hit, “Blue Christmas.”

Also included in the package are Gill’s classic versions of “O Holy Night,” “Let There Be Peace On Earth,” featuring a then 11-year-old daughter Jenny Gill, and “Breath of Heaven,” a song co-written by Gill’s wife and star of the Contemporary Christian genre, Amy Grant.

Gill and Grant are set for a 12-night engagement as part of their much-beloved Christmas at the Ryman performances, beginning on November 28 and ending December 23. These historically sold-out concerts at Nashville’s historic Ryman Auditorium have become a Music City tradition.

Vince Gill: The Christmas Collection is available now in all Cracker Barrel stores nationwide and online at CrackerBarrel.com/music.