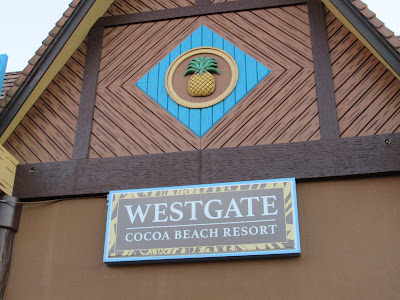 Just a few hours of driving is perfect to keep you close enough to home, but still far enough away that it feels like a mini-vacation. Cocoa Beach is not that far from us. It's a nice little area known for beach time and surfing. We had never been, and decided it was time to remedy that, so we packed up our car and headed straight to the Westgate Cocoa Beach Resort.

If you're looking for a resort that has a traditional pool (7ft in the deep end!), a jacuzzi, a water park for the smaller kids, a lazy river (yes, I did say a lazy river) all by itself (so fun!) AND all-night access to the private beach, then this is the place for you too. I had heard prior to our visit that Cocoa Beach resorts really have it going on; this one was the perfect introduction for us to prove that rumor to be true. 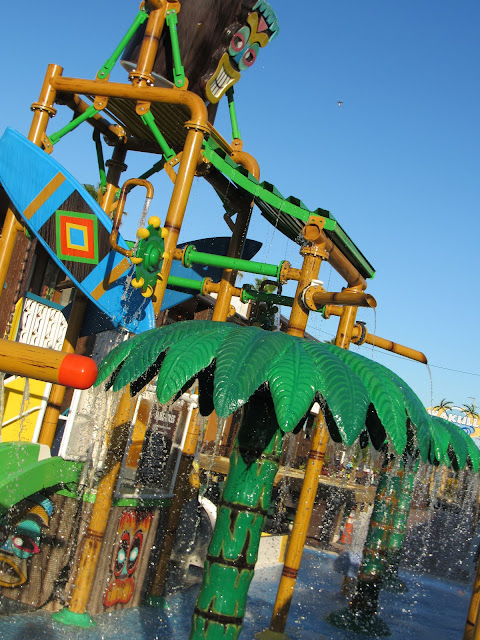 The waterpark is small, and perfect for younger kids. I found myself wishing that my granddaughter had been along several times while we were there. This area had a few small slides, the bucket that dumps when it fills and a climbing area/splash pad zone. She'd have loved the water activities that were everywhere. Speaking of granddaughters...I have good news! It is now official that I have two granddaughters, as my daughter just found out her little bambino (due in March) is going to be a girl. Woo hoo! 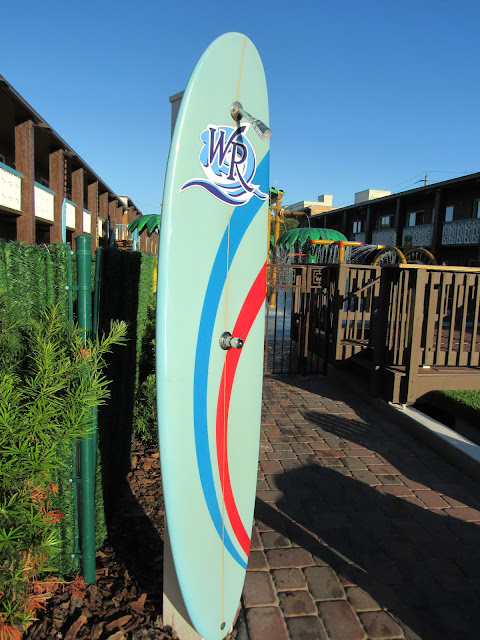 The surf board showers to rinse off in made me smile. Cute touch, Westgate. Another nice touch that I know parents will appreciate is that just a short walk from here, there were outside coin machines for washers and dryers (I think all resorts with so many activities including water should have those). 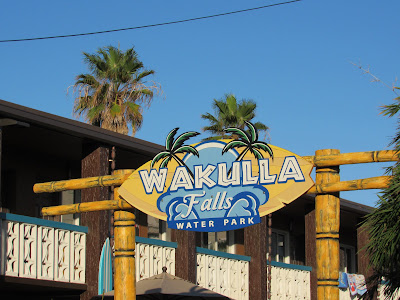 Just pass the kids' area (up a couple of steps) was the area with the lazy river. 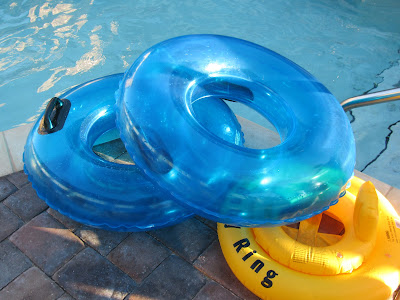 It's literally right outside of the rooms, but sectioned off enough to feel like you're separated from them. We saw 3 different tube sizes (2 are seen above, and there was a larger, clear one for adults) and a ton of various-sized life jackets to help ensure float time was pleasant and safe. 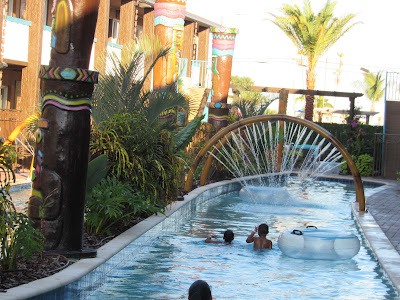 Along the way there were areas to get splashed with water. I thought it was funny that some people were getting off of their tubes here and maneuvering around it. I understand. You wouldn't want to get wet in the water. 👀😂 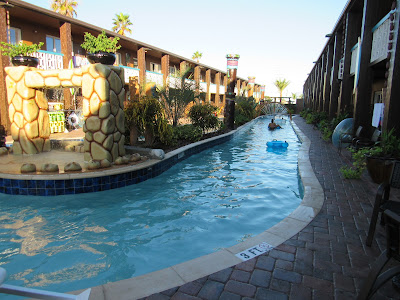 I thought the lazy river was such a good idea. Every single one of us enjoyed some time in there during our stay. 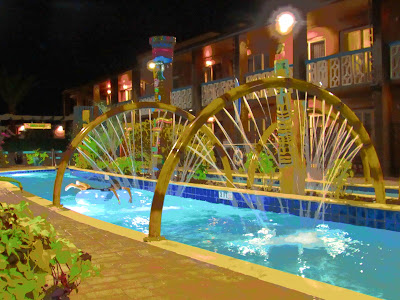 In fact, we enjoyed it so much, we came back in the evening to use it as well. That's my son about to float through the double stream zones. 😊 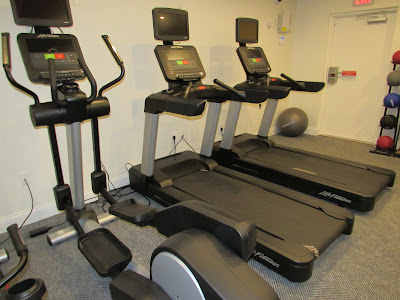 A short walk past the pool/water park/lazy river areas leads you to a building with a small cafe in the front and a gym in the back. The gym is well equiped with quite a few machines that cater to cardio (bikes, elliptical, treadmills), 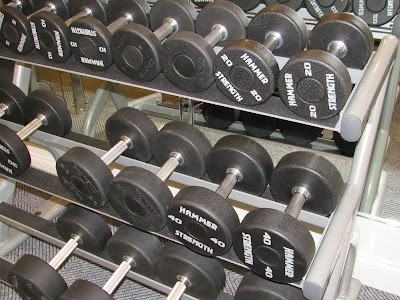 a weight machine, free weights, an area for Yoga, 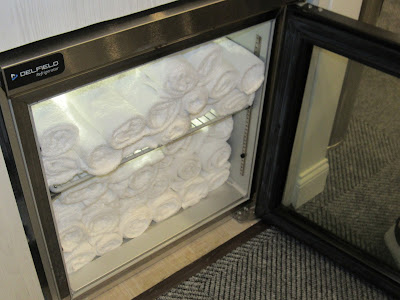 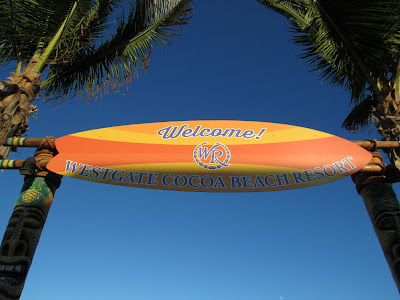 Leave that building and in a few steps you will come across your open access to the beach, and man, was it is luxurious! I could have stayed at that beach all day long. 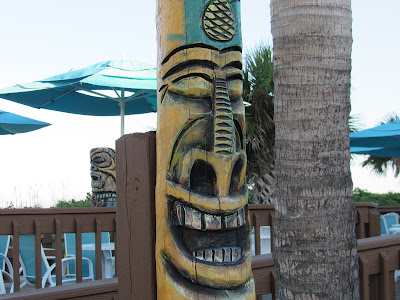 You walk through an area with a LOT of deck space and seating, so you could have a party here...or use it as a really relaxing place to eat or have a conversation. 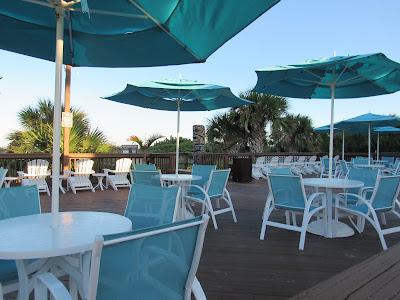 A lot of the tables had umbrella coverage as well. 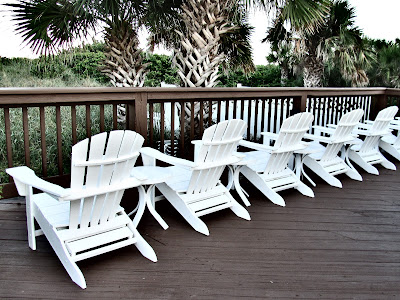 There were a lot of single seats available too, and a section of chairs available to carry out to the beach (day or night) if wanted to utilize those too. 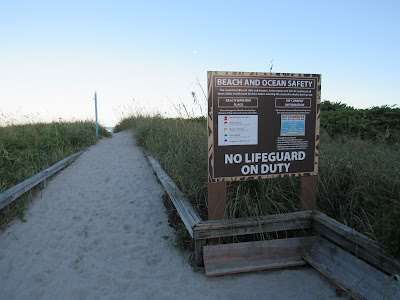 The secluded path to your private entrance leads the way to your own little slice of paradise. 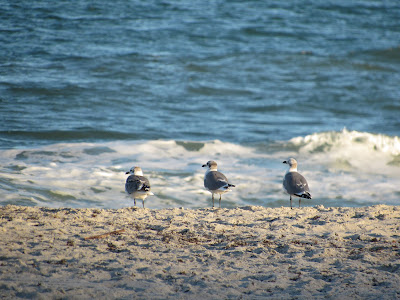 There is a volleyball net up for those who'd like to strike up a game. I was more interested in the scenery. These 3 stood at the shoreline for over an hour. Wonder what they were thinking? In any case, I was just delighted to see them sitting there so chill. 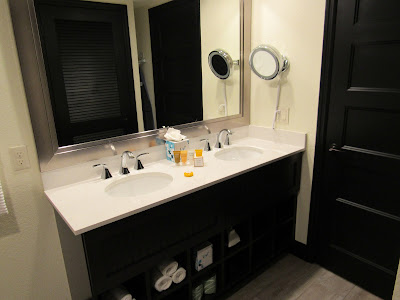 The room we were in was fantastic. It was a traditional suite layout with 2 bedrooms, but it was the little extra touches sprinkled about here and there (everywhere!) that made it standout as a resort instead of just a hotel. The double sink in the bathroom off of the guest room with a lighted make-up mirror and HUGE bath towels that were so soft and absorbent made me more than a little happy. That door you see in the photo above leads to the bedroom which was a very clean room, with two twin beds, a dresser, a place to hang your clothes and a flat-screen TV (there were 3 of those in the suite). The mattresses on those beds were oh so comfy and the room itself was immaculate, the whole suite was, in fact. 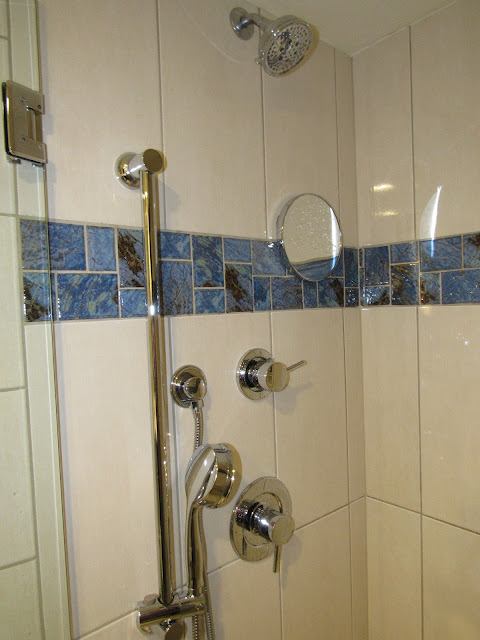 The master bathroom had 3 shower heads. The traditional one, a handheld one and the big rain shower in the middle that was affixed to the ceiling. My son was transfixed and instantly in love with the room (it's the little things, right?). The bedroom had a huge king-sized bed with a mattress that made sleeping in luxury a reality. 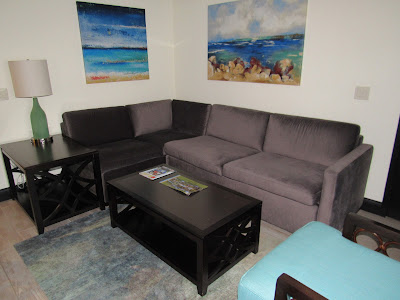 There were plenty of places to sit. A nook in the kitchen, 4 barstools at the kitchen counter and this are in the living room that had a sectional and a separate easy chair. 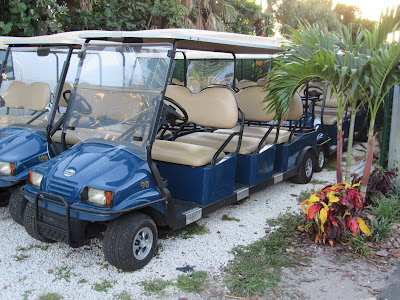 There was a free shuttle to take you to the pier if you wanted to visit (we did, but we drove...the resort gave us a free parking pass) and golf carts could be seen all around the property. 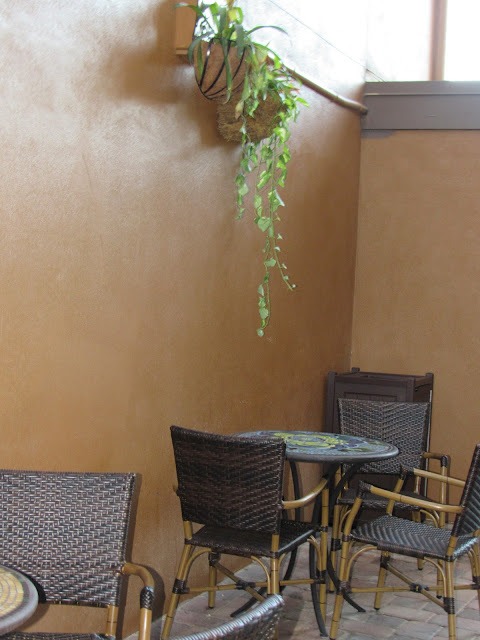 Though most of the seating areas we came across had a tropical feel, this particular little alleyway had cafe tables that reminded me of Europe. :) 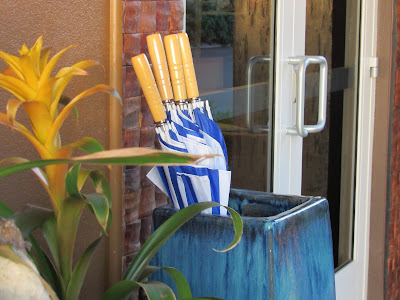 Complimentary use of large umbrellas was available, which made it super convenient if you wanted to walk the strip but it was drizzling rain. We were very fortunate that it didn't rain a drop when we were there, but I did love the consideration of including the umbrellas for guests. If location is everything, and we all know that it is, Westgate Resorts Cocoa Beach, Florida has clinched one of the absolute best spots in the area. 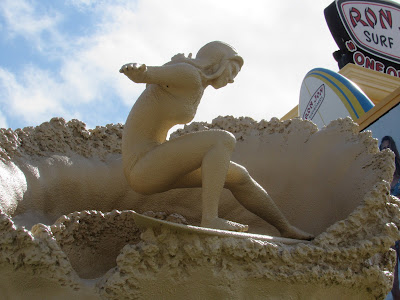 There were a ton of great restaurants within walking distance, as well as gift shops, specialty stores and Ron Jon Surf Shop. 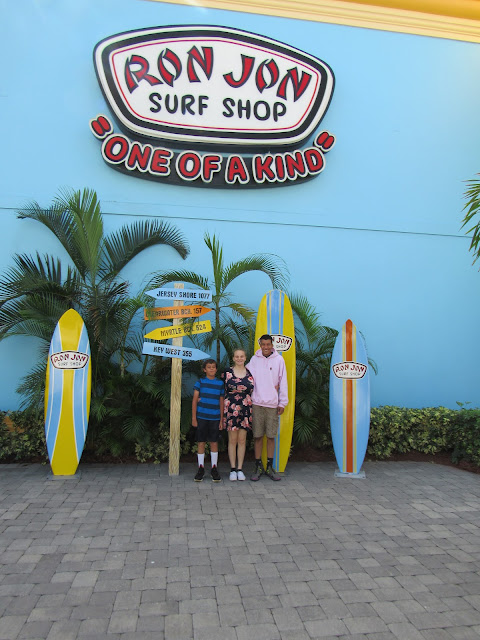 I think I was the one most excited to go to the surf store, though everyone seemed to enjoy it. I have been seeing the billboards for years, so really wanted to see it in person. It was huge, and did not disappoint. 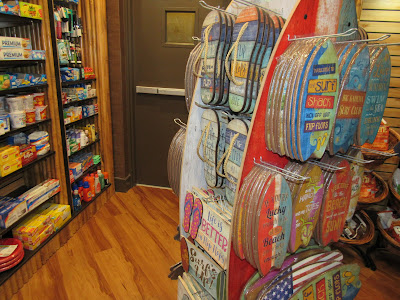 Back at Westgate though, if you didn't want to leave the resort at all you didn't have to because they had a small beachside restaurant (sandwiches, hot dogs, that kind of thing), a store for boogie boards, and a little area in the lobby with food, water/beverages, sunscreen, souvenirs and the like. 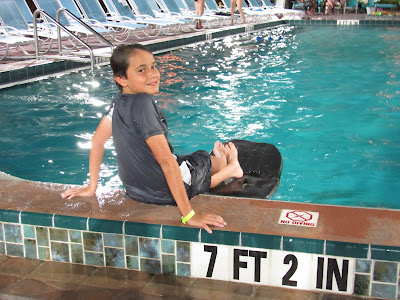 We spent a lot of time in the pool. This picture was taken way after little man's bed time, but so what? That's what mini-vacations are for, right? What kid doesn't like to deliberately stay up late because they wanted to get in some more swim time at their awesome beach resort??  I can't think of one. :) 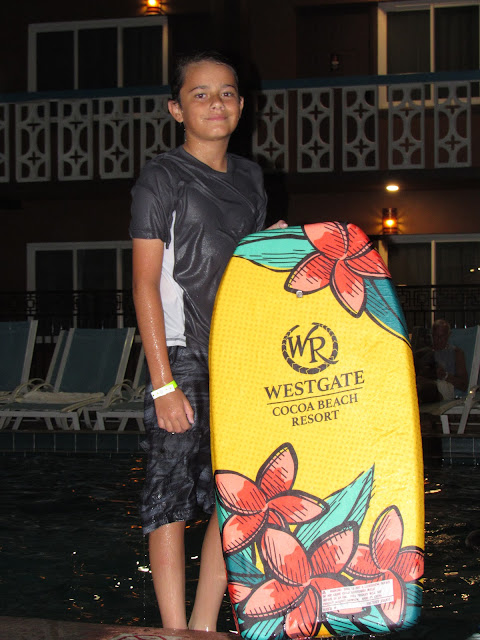 There were items at the pool to help make playtime more fun. 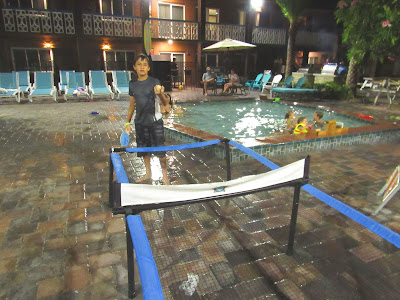 I don't know what this game was called but we played that for a bit and had some fun (the ball was heavy and weighted, so it wasn't traditional pingpong). I saw in the far right corner (just outside of the picture) they were putting up a tiki hut with a bar in it. I'm not sure what this resort looked like before (maybe it was still just as awesome?) but you can tell they have recently put a lot of work into making it an extremely relaxing and wonderful place to stay. We enjoyed our visit, and will be happy when we have the chance to return. I'm thinking there are lots of breaks from school coming up, with the holiday vacations just around the corner. Parents, why not take a mini trip to Cocoa Beach?
on November 05, 2018