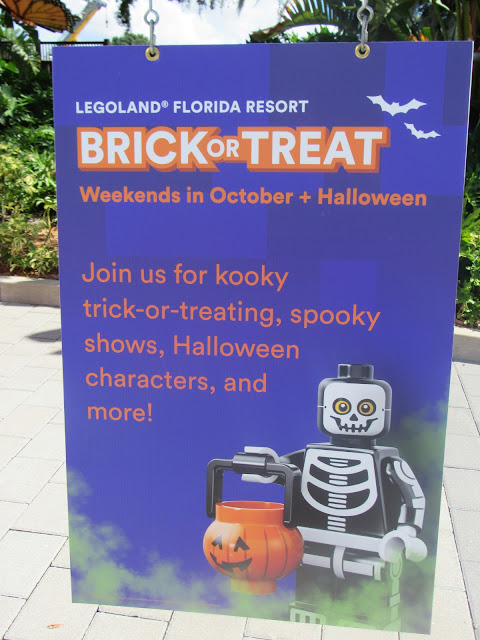 Legoland in Florida turned out to be such a treat for the kids (we went yesterday), both figuratively and literally speaking! Now through the end of October, on the weekends only, they are hosting Brick or Treat for the kids, and it's really a fun time, and a safe environment for the kids. One thing I also love, is that it's truly for children. There's nothing scary or gruesome like there is at the other big parks right now. I know a lot of people like the latter, but when littles are involved, I'm perfectly content to stick to howling at dusk (over the loud speakers in the back of the park) as being the 'scariest' event that takes place. 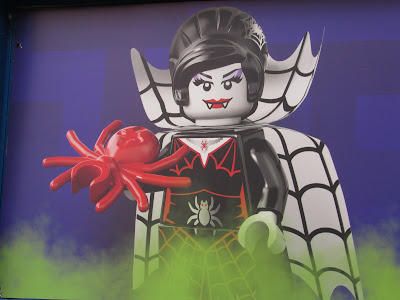 The walls leading to the 'Brick or Treat' trail were painted with cool characters (many of which we came across for character meet-and-greets as we walked through the park). I was hoping we would come across Spider Lady because that costume is cool, and while we did come across some awesome characters walking around, we missed  her this time around (we saw Vampyre and a Mummy though, and they're pretty awesome too). 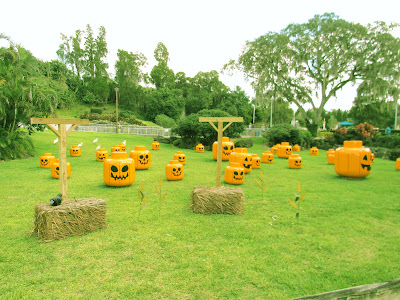 There were seasonal decorations all around us while we waited in line to get our goodies at the Brick-or-Treat event. There were live characters in costume too, such as some hilarious scarecrows who came to hang around the field you see above, and interact with the people in their area of the line. Those passing out juice and treats were dressed up as well (of course), and they each had their own little 'haunted house' they dwelled in while passing out their treats. 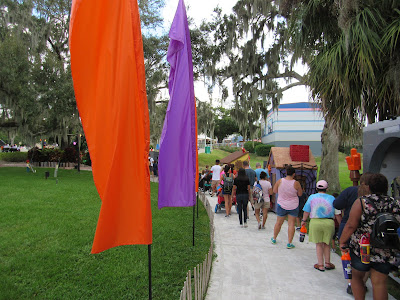 The line allowed children up to age 12 to get treats. My son is 11 so he was delighted.  We brought along his entire Batman costume, but it was hot! I told him to go through with just the mask and cape. He asked if he could go without the cape. I looked around and saw a lot of kids with no costume at all, so I told him okay. 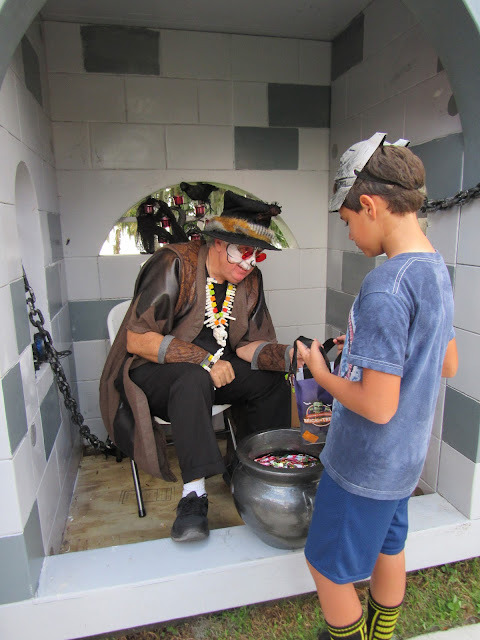 Thankfully, everyone was kind to him and gave him goodies, as well as my sweet grandbaby who was all decked out happily in her Rainbow Dash costume. I was glad because not everyone is always nice to the 'bigger' kids who like to trick-or-treat. One thing to note that I was really proud of...my granddaughter politely said, 'no thank you' to everyone who offered her candy (except for a very small selection of sweets she decided to accept). Her parents are not big on junk food at all, so I was really impressed that it was just natural for her to turn down the sweets. She did 'wahoo!' for a granola bar. ;) 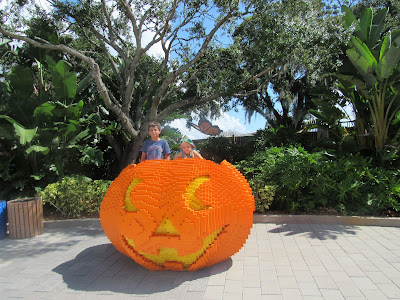 There were plenty of photo opps, and Legoland is generous with allowing you to take your own pictures, as well as taking them for you if you'd like, while they take one with their professional camera as well. Because they are so kind like this (if you've ever been to a park that doesn't allow you to take your own pics at the specified photo opps, you'll 'get' what I'm saying), I make sure to purchase at least one on of their photos in the booth on the way out before we leave. The one above is mine. My two little pumpkins standing inside of the LEGO pumpkin. I'm digging that butterfly. :) 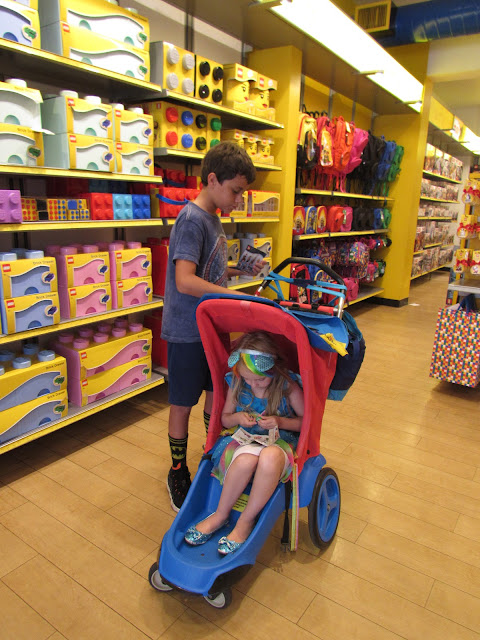 Little miss assured me she didn't need a stroller, but her mom had also told me which shoes would be best for walking all day, and I let my grandbabe convince me she ONLY needed her shoes for her costume (which of course hurt her feet before we even made it into the park), so into a stroller she went...and she ended up loving it. I also purchased her a pair of flip-flops at one of the LEGO stores later in the day because she had a teeny blister forming (aye yai yai!). Fortunately those shoes matched her costume perfectly (very important when you're 5) and they were on sale for just under $5.

In the picture above, they're building their LEGO minifigures that we bought on the way into the park. We always pick up a few of the little packages for trading. Workers wear minifigures on their name tags for trading. That usually works out well, but this time, the kids liked their own so much they didn't trade. :) 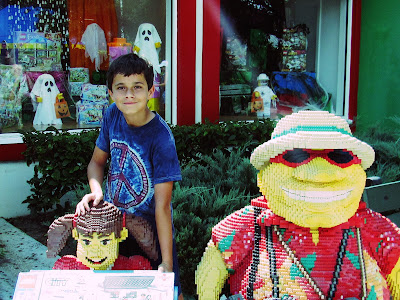 One thing I really love about Legoland is that they have a lot of things made of LEGOS! Seems like a no-brainer, but if you're going to be in a place designed for LEGOS, it's super nice when they go all out for the little touches that make a visit seem even more special. Little characters made of LEGO bricks are everywhere you go. They're fun for photos. 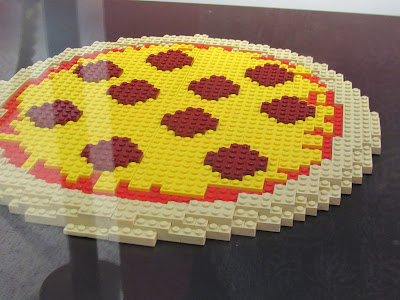 Menu items adorn restaurants that are made out of LEGOS, such as this pizza in the pizza parlor where we got lunch (one of many LEGO creations in the restaurant and in every place we visited). They're on the backside of the display glass, like a real item being made, and that made me smile. Smart thinking Legoland operators. ;) 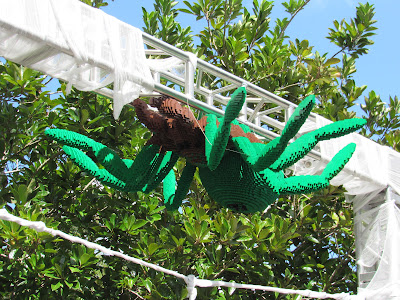 This huge LEGO spider adorned the Spider Build, where a web of creations that were built by people visiting the build were put on display. 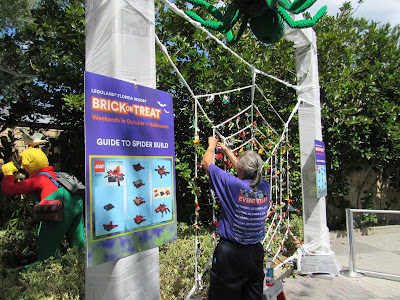 There were several of these 'builds' throughout the park, but this one was our favorite. You could build at the table and contribute as desired. 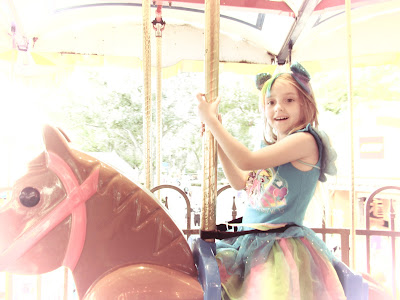 The double-decker carousel was a treat for my granddaughter because we were up 'so high!' Yep, we went right to the 2nd floor...twice. 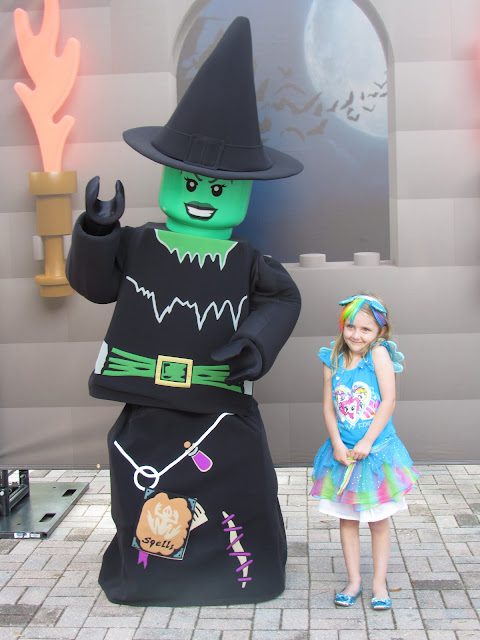 When she saw the witch character she practically ran out of the stroller to run and meet her. I had to remind her that a warning before a stroller bolt was always in order, lol. They told her to make a 'scared' face, but to me it was more of a cute face than a frightened one. ;) 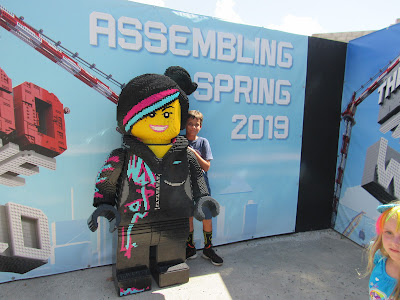 Wildstyle is a character favorite for us (from the LEGO movie). My son is at that age where he doesn't get so excited about character photo opps as he did once upon a time, but he rushed right over for this one. My granddaughter, who hasn't seen the movie, could not have cared less (see her in the corner?). :)  I like Wildstyle (this was a Lego creation, not a real person). :) I always like to take a walk by the water and see the beautiful Cypress Trees while we are at the park. This huge pirate ship next to the ski jumps and the bleachers for the various shows that are put on was really magnificent (as are all of the LEGO creations you come across while you are there). 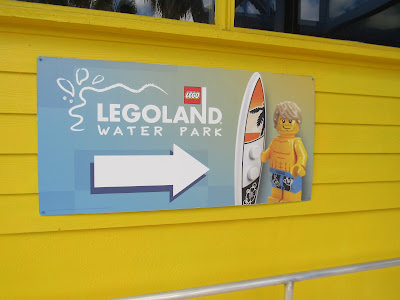 If you purchase a dual ticket on the way in, you can also visit the Legoland Water Park. On a hot day like we had (it got cooler/nicer as the day went on), it's especially nice to visit because by the time you get to this spot, you're ready to cool down. 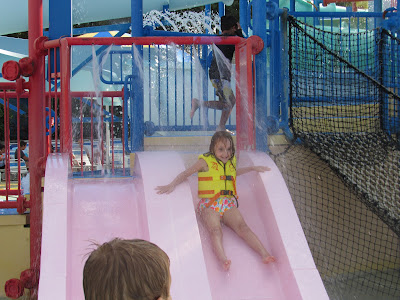 My granddaughter thought the water slides were the BEST. She laughed and smiled her way down this one about half a dozen times. Each trip had the same big smile landing on her face (a big aww for a grandma's heart). 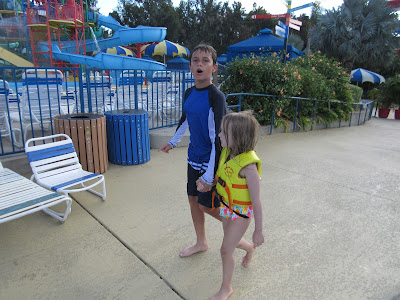 Another big aww? He's instinctively holding her hand because they're going into the water (and she's letting him). ;) 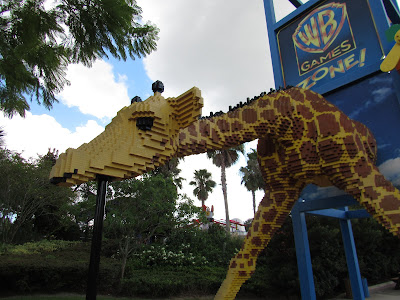 When we finished our water play (the water park closes at 5 p.m. and the amusement park stays open longer), we went back to visit some more places, eat, and play. There were a lot of building opportunities, a roller coaster or two for my big guy, and tons of rides they both could enjoy that were more mild. There was also a DJ spinning tunes for the kids to dance in one of the areas of the park. My granddaughter who loves to dance opted out, not because she was shy but because it was situated next to an area with huge bricks so the kids could build. She had a blast creating while the music played all around us. The mood was very festive. 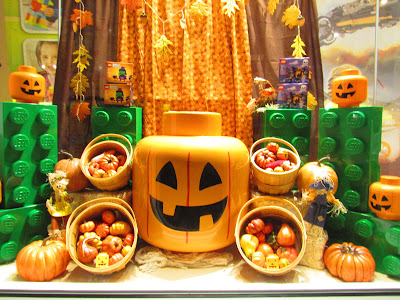 I'm not sure the kids noticed the great displays in the windows, but I did, and I loved them all! 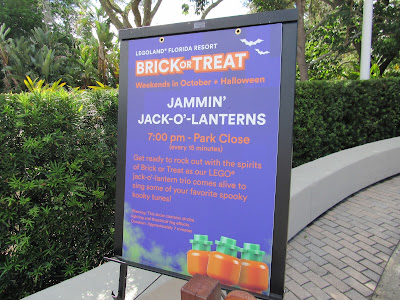 The Jammin' Jack-O' Lanterns on display when you first come into the park, light up and play music at night on the way out. 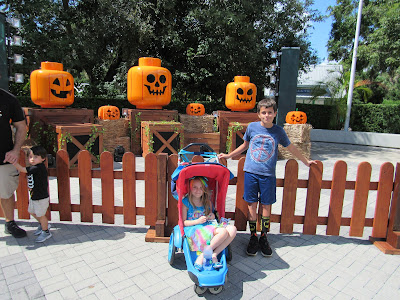 The amusement park closed at 8pm on the day we were there (Saturday). We did stop when finished for the day, to see the show (it was dark by then, the picture I took above was taken earlier in the day, on our way in). The fireworks show takes place then as well, so we stayed to watch it. It was very grandiose and a great way to end our evening. On the way out, we decided on a whim to book a hotel room at the Legoland Resort right next to where were were (the park is a few hours from our house and by the time the day was done, we just wanted to chill), but it was full. I guess we weren't the only ones who had that idea. Lesson learned and next time we'll book ahead so we can get a room right next to the park, and relax overnight instead of having to jump right in to driving that trip home.

Our Legoland is located in Winter Haven, Florida. It's a bit of a drive for us, but it's worth that and then some! Check out the schedule for the Legoland seasonal events in your area (shows, movies, character meets, Brick-or-Treat, etc.), and take your kids to get in on the fun too!! If they're 12 and under, I predict they're going to love it. We sure did!
on October 07, 2018