The Sweet Nostalgia of My Hometown with My Child 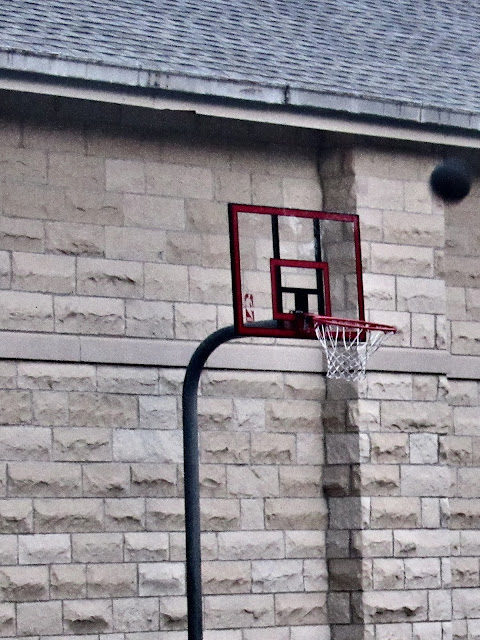 Swish! There goes the ball, right towards the hoop, and it's the first thing he wanted to show his grandmother he could do when we arrived to Sandusky, Ohio. 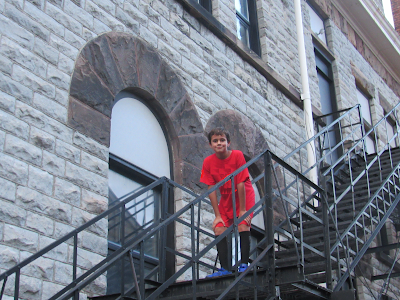 Of course, the most exciting part of visiting was seeing my mom, but visiting my old haunts is always on my list of things to do. The basketball fun took place at my old elementary school, as did this picture here. In fact, that fire escape was right outside of my 3rd-grade classroom...and the same one my friend Amy and I used to climb to go sit and play 'school' in the summer. Right underneath it is a huge dumpster. I remember one year (I went to this school K-6) the school pictures parents hadn't purchased were tossed on top. We got in there and took those out to play, lol It's so funny what kids will do all in the name of imagination. 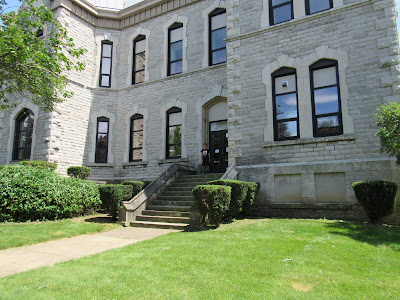 We also visited my 7th grade school (which at the time was one huge building with just one grade in it), my 8th grade and high school (the last two not pictured). I love these old buildings. If you look carefully you can see my son by the door. These places are so massive that he looks really tiny. I'm not really all that far away with the camera. I remember trudging up these stairs with my snow boots on, banging them to get the snow off before walking inside. :) 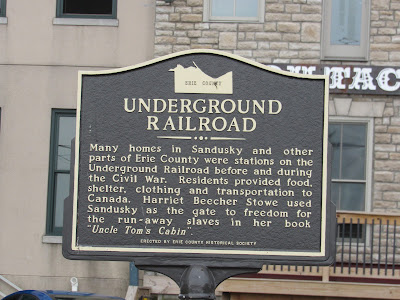 There is a lot of history in Sandusky that we weren't taught when I was young. Historical markers are now dotted all over the town like this one you see above. Those weren't there either, when I was a child. I think they are a wonderful addition. 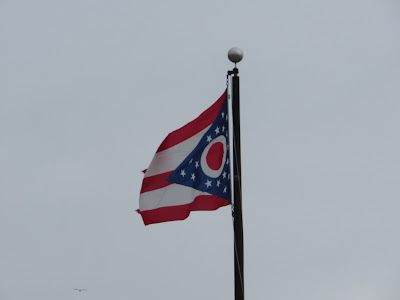 It wouldn't be a visit 'home' if I didn't get a picture of the state flag. :) 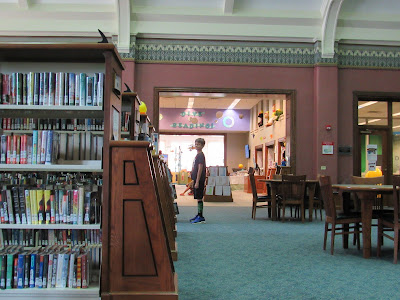 Likewise, a trip to the library is always in order. I spent SOOO much time in this place when I was a kid. I remember loving everything about it. They have redone everything on the inside, and it looks lovely, but it doesn't look like my library anymore (at least on the inside). 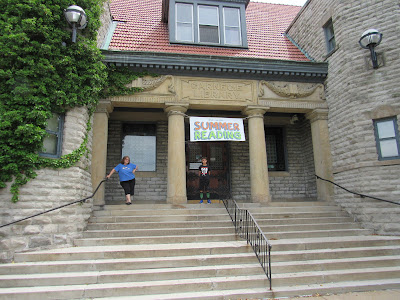 The outside is just the same though...and again you can see it's a massive stone building. My mom and youngest son are at the top of the stairs. 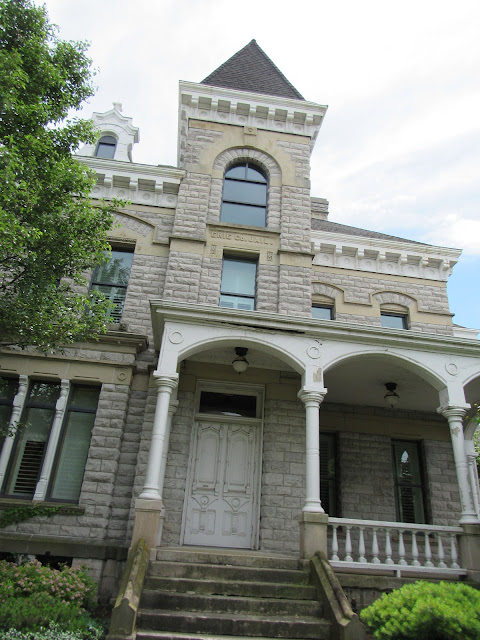 This building, believe it or not, was actually the jail when I was a kid. It's right next door to the library. In my childhood imagination, I always envisioned men holding the bars in the basement windows and trying to see out...because of course 'bad guys' were absolutely being held downstairs in the scary basement. 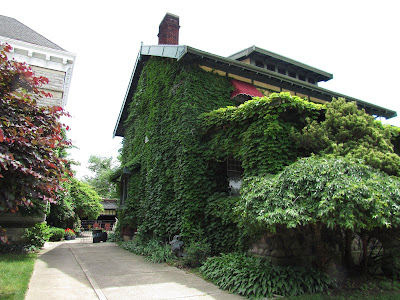 This house is next to that jail and I'm thinking a). it probably was scary to go home if you were a kid and the jail was still there (who wants to live right next door to a jail?). b). it was probably awesome to have the library so close and c). isn't that greenery bad for the house if it's growing on it like that? 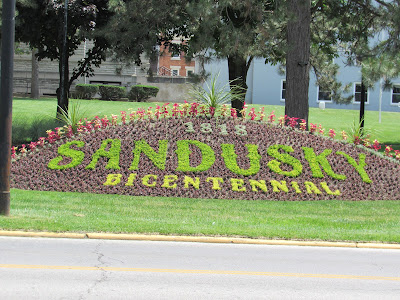 We took a walk through the downtown area and reminisced about some things, as well as learned what kind of changes had gone on since the last time we had been for a visit. 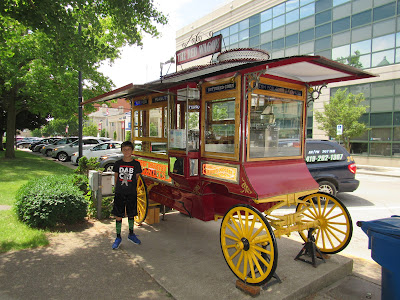 A lot of things were different, just in a year's time, but thank goodness the popcorn wagon is still there. You can actually buy popcorn here during live events (Fridays are 'Rock on the Dock' with live music and there are other events from time to time as well). 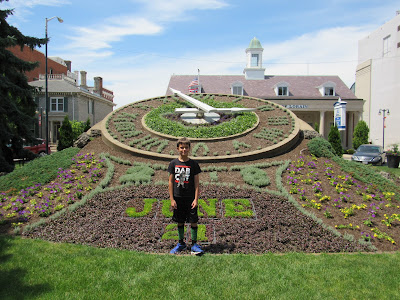 I always loved how well manicured they kept the downtown when I was a girl, and it's still just as pretty. 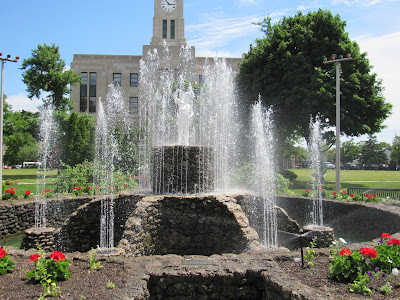 The Boy and the Boot statue is famous up north. See him there at the top? He has his own social media accounts. :)  I always loved this fountain because it cannot contain itself. If you are anywhere near the edges you are going to get wet. The building behind it is the courthouse. 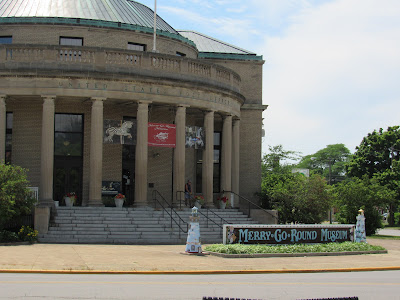 Across the street is the Merry-Go-Round Museum. When I was a kid, we'd go up those beautiful stairs to get stamps. Yep, it was the post office. :) 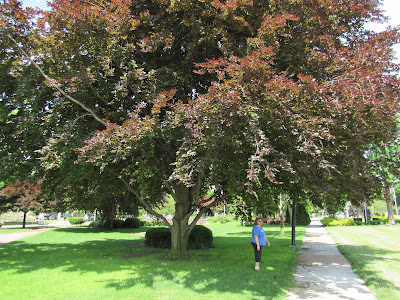 I've always loved the trees up north. They grow very tall and sprawl over the sidewalks. A lot of them have colors other than green too! Here's my mom underneath one of the biggest ones there. 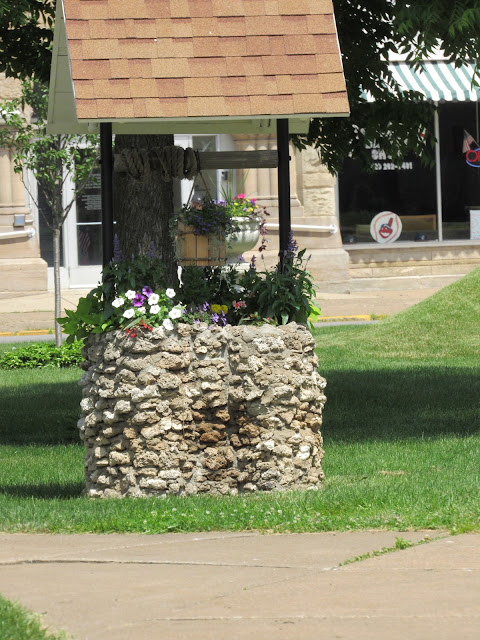 Just behind this wishing well, which has been there forever, you will see an 'Open' sign. That's Flippens. Well, it's not Flippens anymore, as my mom was swift to remind me, but to me, it'll always be one and the same. That was where I got my saddle shoes for school each year. They'd let you sit on a pony to get your feet measured for a proper fit, and give you a lollipop when you were done, lol. I honestly have no idea what's in there now, and didn't really want to cross the street to find out. ;) 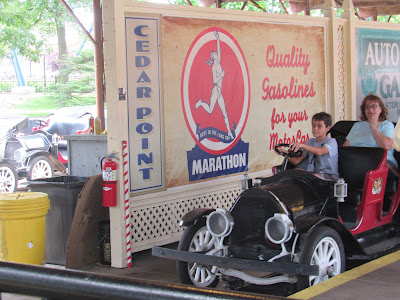 Of course a trip to Cedar Point was in order. I considered not going, just because I've been so many times, and I do mean hundreds of times. We had passes every summer and I continued to go as an adult, traveling 1200 miles for years to do so, and then we'd travel just a few hours when we moved to the state next door. It is one of my best childhood memories, and likewise for my kids. They love it more than Disney World, and DW is right next to us (it's the rollercoasters...they have the biggest and best in the world)! Here's little man taking his grandmama for a ride in the old-fashioned cars. She doesn't look worried, but I think he's too young to be driving. ;) 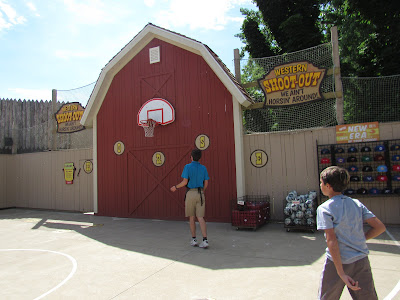 Here's a new game they added this year. My son watched about ten people go before he worked up his nerve. Only one person prior to him won a prize and it was a small one. He saw adults walking away empty handed. He was starting to sweat, but he knows he's good too... so, he finally went in. I knew he would. He'd been guarding his spending money all day until he got to just the right thing. This was just the right thing. 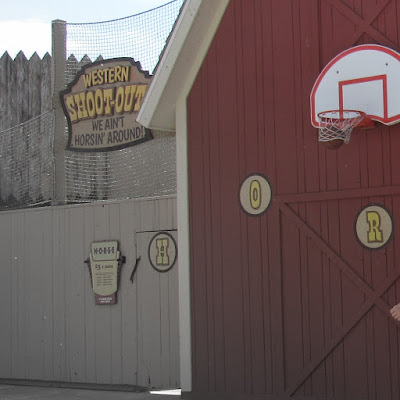 He missed his first 2 easy shots and thought he was going home empty-handed. I couldn't believe it! But then he nailed the two far shots. The one coming from the far right corner...there it goes, swish and hurrah, and then the one coming in right from the middle. Double swish. Good job, kiddo! 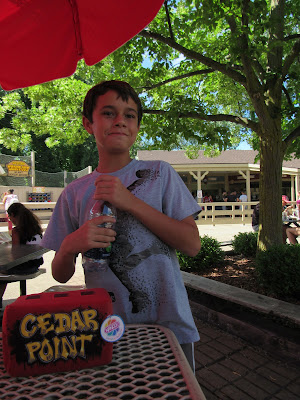 He won a foam brick. You can see he's relieved and happy that he didn't walk away without a victory of some sort. Basketball is becoming more than just a hobby to him. He's in his 5th season now, and I'd say it's definitely becoming a passion. 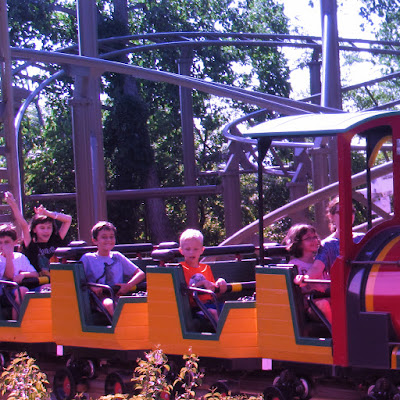 Though Cedar Point has always housed the world's biggest, fastest rollercoasters (and we did ride a couple) we stuck primarily to the slower rides this go around. Gram doesn't ride (my mom), and we wanted to spend as much time with her as we could. 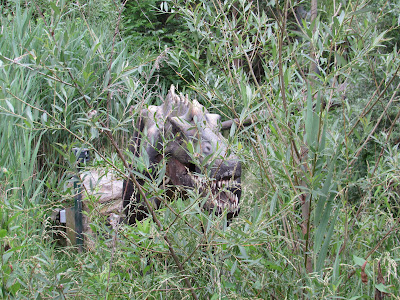 The one thing about Cedar Point, you never know what surprises might be lurking. You see what I mean, right? 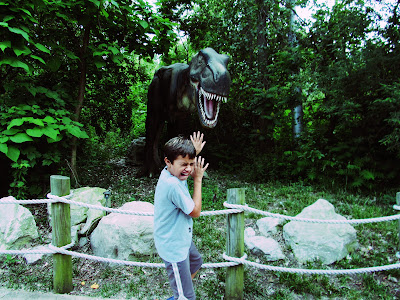 And here's the boy, hamming it up for the camera. There is a walkway full of dinos here. It's fun to go through. I like this area and so does he. My mom wasn't overly thrilled with it, too many bugs in the woodsy areas coming out to feast on her, lolol. 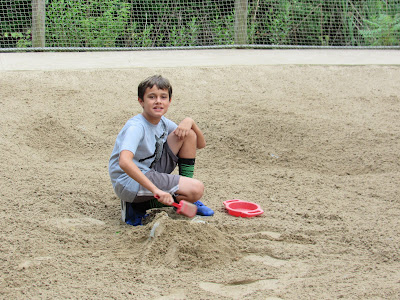 There was a dino dig area there too, where you went into the sand to find the 'bones.' He found several and would have been content to find them all if his grandmother hadn't nixed the idea and told him to, 'come on now, it's time to go.' 😄 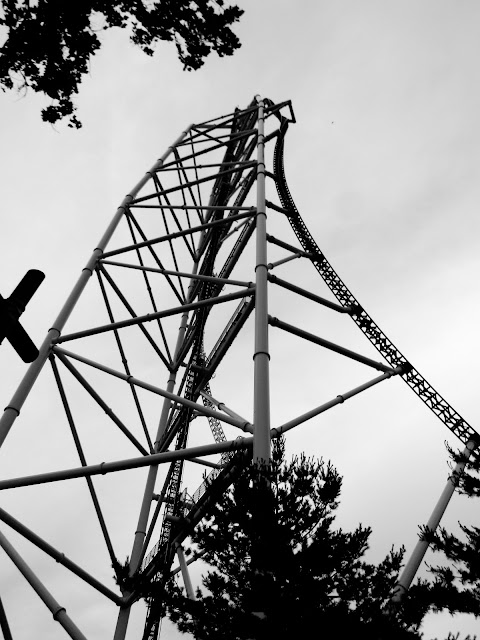 Hello, Top Thrill Dragster that I love. It was nice to see you again. I missed you. :) There are some rides that just never get old. This is one of those for me. :) 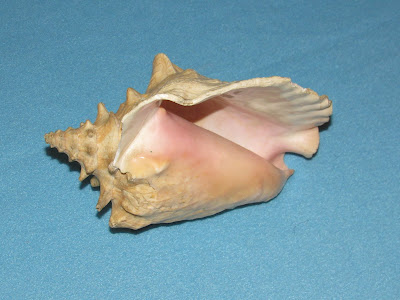 Back at my mom's place, I was surprised to see my grandma's conch shell out on display. My mom took it when gram passed, and she guards it very carefully. It was like coming across an old friend, as it was for many of the things my mom still has that once belonged to my grandparents. There's such a wonderful familiarity to visiting home, even though so many things change. 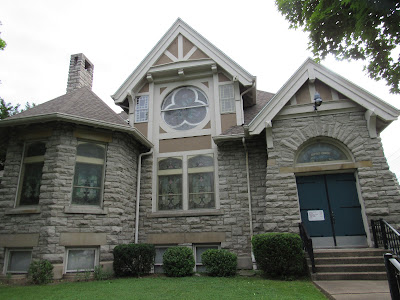 I took my son to both of the churches I attended as a child. One that we went to every Sunday while I was growing up, the same one my daughter got sprinkled with water in, when she was a baby, and the one you see above, where I went to Vacation Bible School every summer. The latter church was my dad's. He passed before I was born (mom was 9 months along), so going there always made me feel connected to him somehow...I guess just knowing I was in a place he had been once upon a time too, was a sort of comfort to me back then. 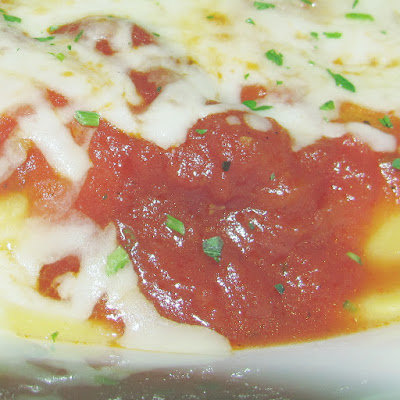 And this picture, I am just putting in for good measure. My son isn't overly fond of Olive Garden (gasp!) but my mom loves it, so woohoo! I had someone to enjoy it with, and off we went to the restaurant! 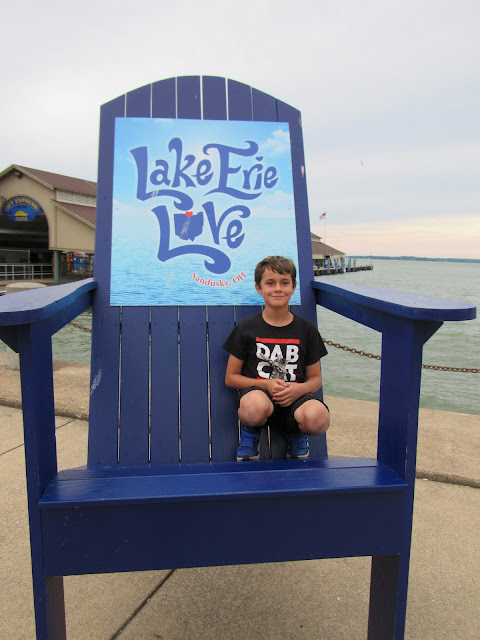 Afterwards we drove to the water and walked along the shoreline. We got our photo opps in the big chair, and boy was it a big chair! If there's water and/or boats, it's a pretty safe bet I'm out there admiring the scene. No one in our party was complaining. ;) 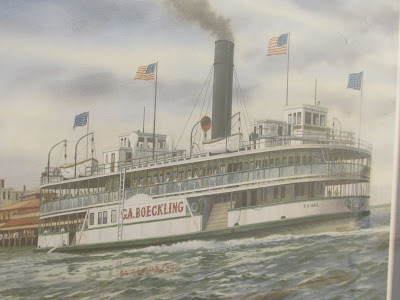 For the most part I got to see everyTHING that I wanted to see, except the G.A. Boeckling. I know this big ferry is somewhere in the city, but I've never come across it while there. I'll have to make it a point to search more thoroughly the next time we go. I did not get to see everyONE though, that I wanted to see while we were there. I'm hoping to make up for that next time. Until next time, Sandusky...until next time.
on August 27, 2018