An Inside Look at The Roman Guy Colosseum Ground Floor Tour

Disclosure: This is a sponsored post. All opinions stated however, are genuine and belong to the authors. Post written by my 2nd oldest son and his girlfriend.

My son and his girlfriend have graciously offered to do another he-said/she-said write-up for me, regarding their recent trip to Europe, which included a few days in Rome, Italy. They used The Roman Guy for (2) of their tours including this Colosseum Tour (which included the Roman Forum and Palatine Hill), and they really enjoyed and appreciated them both! The Roman Guy offers tours for all of your favorite travel destinations in Italy, and I saw on their website that they also offer tours in Paris. Today's reviewers also wrote a guest post previously about their how they beat the lines (if you have visited there, you know that's a big deal!) using The Roman Guy Privileged Entrance Tour when they visited Vatican City and the Sistine Chapel (you can read about that here). Thank you Josh and Kiera, for contributing to my site. I love it when you visit (on the blog and in person). :) 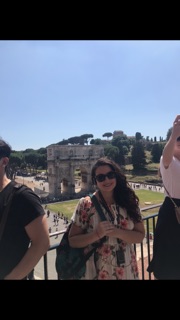 If you haven’t been to the Colosseum before it should definitely be on your bucket list. It is one of the most remarkable structures you will lay eyes on. Walking through it while hearing the history lets you picture what it was like to live in the life of a Roman citizen in the first century. Josh and I were fortunate enough to get to see this wonder in our time in Rome. We used a tour through a group called The Roman Guy which was extremely informative.

We met the group under the green tent behind the Colosseum and they escorted us into the line with our tour group and leader. There they provided us with a headset and the plethora of facts began. Our group leader was an archaeologist who you could tell had a heart for the Colosseum. She knew everything that you could think of having to do with this site.

Now my favorite part about using The Roman Guy was we were able to start the tour out by going through the floor level of the Colosseum! It was perfect for getting to see the place up close. The floor level isn’t open to the public so I was very excited when Josh informed me we would be going down there. 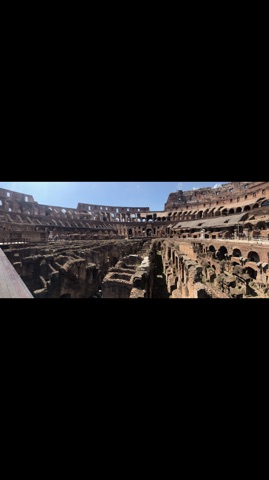 The stories she told painted a vivid picture of what each part of the building did. There are rooms and sections that fill the bottom where they would keep animals and gladiators and soldiers. They even had ancient elevator type structures that would raise the opponents up through the floor into the arena. We were able to see the seats of where the higher order citizens of Rome would have sat as well as some of their names still carved into the marble.

The Colosseum was actually designed for the citizens to have something to do and they would even provide food. Over the years earthquakes, elements and other things destroyed parts of it but they have worked to reconstruct parts to make it as close to how the original would have been.

After the Colosseum Arena Floor Tour we went through the top levels, through the sides and then out to the Roman Forum. I would recommend doing this tour during a cooler month because it got hot and there was not a lot of shade. If you go during the summer make sure to wear light clothes and bring a water bottle. There are spots throughout the forum with these cool spots of running water to refill your water with. And bring sunscreen! I still have weird tan lines from my shirt I wore on the day of the tour.

We worked our way through the Roman Forum and ended the 4-hour tour a little before dinner time. There are gelato spots all around the site that our guide suggested to cool off with. It was an amazing experience to share together and could not be more grateful for the experience provided by The Roman Guy for the tour.

Joshua's Point of View (and yes, he is one of my most favorite co-writers). 😍 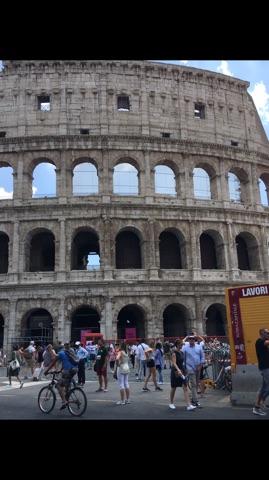 Your favorite co-writer here, Joshua. I had mixed feeling about the Colosseum. The structure from the outside put every picture you have ever seen of it to shame. 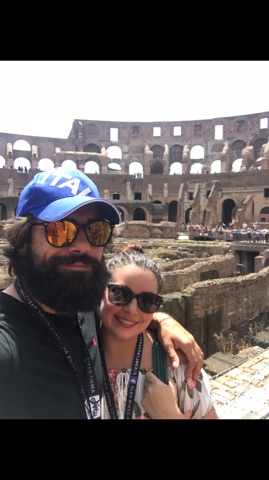 The inside was impressive in its own respect. Personally I build things for a living, have built houses from the floor up, renovated mini-mansions, laid marble and flooring worth more per square inch than I make in a year. So for me, I appreciated the quality and magnitude of the structure, knowing how much work it takes to merely put a room together, much less a 600 ft. (183 meters) structure, so in that aspect and regard I was floored. It was a marvel.

The mixed feelings of the Colosseum for me personally came from the surprising amount of new
renovations ....not to take away from the tour itself because the tour was very good. It had a lot of benefits such as going in early, skipping lines, seeing restricted areas, getting a history lesson of what’s original and being able to lay your hands on an almost 2,000-year old carved piece of history. All of that in itself was beyond worth the tour from The Roman Guy. 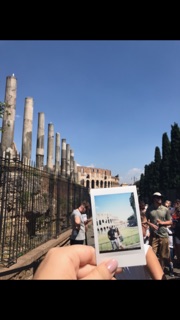 After rummaging through the Colosseum (*spoiler alert* get ready for a leg work out), you get taken to the Roman Forum and Palatine Hill. It is about a 10-minute walk and you will likely be approached by a few charming street merchants who want to take pictures of you with the gorgeous landscape in the background, rent you a Segway, or talk you into buying something from them. I figured it to be part of the experience so I enjoyed haggling and verbally sparring with a stranger over paying a price for something I didn’t particularly want or need because I felt guilty/obligated due to their kindness ... once you make it through that gauntlet you reach security before entering the Roman Forum and there I had no mixed feels. It was an absolutely beautiful place!! The stories behind each building, the things people did, the purpose of each building, the landscape, background... It was a place you could just sit and look at for hours not saying a word while just trying to soak in and process the unalloyed beauty of your surroundings.

Along the way your ear is filled by your tour guides' voice, comparable to a talking encyclopedia along the way, Just as you start to get tired and thirsty, there is a fountain of water and a boulder or stone bench to rest on. All-in-all, 4 hours to tour is a significant amount of time, but ultimately it was 2 separate tours: one of the Colosseum and another of the Roman Forum, so the time frame is justified, especially considering it's one of those things you can do once in your life and not come across an experience to rival it. That being said, even if cutting the lines was the only perk the Roman Guy tour offered, it would be worth it, BUT there is so much more you are bound toward.
-End

A big thank you to Josh and Kiera for writing (I truly enjoyed reading their perspectives and seeing their photos), and to The Roman Guy for making their experience in Rome, Italy so much more special. If you are headed to Italy (and/or Paris) now or at any time in the future, be sure to bookmark the Roman Guy website. I have been to the Colosseum, and though I loved it, at that time I hadn't heard of this tour company, and we did the trip on our own. It was beautiful to see (amazing, wonderful, fantastic, in fact), but we didn't get to learn about anything we were looking at, nor did we get to skip the lines (oh how I wish we would have had that perk), and we certainly didn't get to see ground floor like Kiera & Joshua did (going lower-level would have rocked!)!  As a side note, I agree with my son (Josh), that the Colosseum is extraordinary and a do-not-miss visit, but The Roman Forum...touches you. I loved both areas, but I could have stayed in the Forum for days!!. You can learn more about the reasonably priced, comprehensive and ahmazzzing tours offered by The Roman Guy, by visiting their website. You can also follow them on Facebook, Twitter, Instagram and/or Pinterest.
on July 18, 2018