Disclosure: This is a sponsored post. All opinions stated are genuine and my Stay-Sky-Suites-loving own. Looking for a weekend getaway? Going to Orlando for holiday shopping? Need a great suggestion for a family hotel in the Kissimmee/Orlando area? We felt right at home from the very first second that we stepped into the Stay Sky Suites I-Drive Orlando, and I'm so on board with recommending them to anyone who is in the area, looking for overnight accommodations.

Check-in was easy. The gentleman who met us at the desk was attentive, informative and considerate, and not just at the initial check-point. In fact, he gave us a greeting, or asked us how we were doing (or if we needed anything) every single time we saw him. The lobby was very welcoming too, with an area to sit and lounge, and a beautiful Christmas Tree to help usher in the holiday season. We took several family photos in front of that tree, and they came out so lovely! 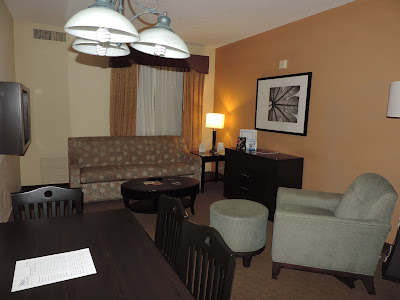 We booked a one-bedroom suite, complete with a couch that pulled out into a double bed; a plush arm chair with a foot stool and a table and chairs. There was a television on the wall if you wanted to hang out and watch it. There was also a dresser, which was great for the two in our party who were sleeping on the couch: it gave them a space to put their items in, and didn't clutter the area that was meant to be a living room during daytime hours. There was also a closet so clothes could be hung up and kept wrinkle-free. There were six of us in the hotel, and we never felt cramped once. This room was perfect for allowing us all to get together to visit, and later in the day on Day #2, when my oldest and his girl stopped by for a visit, we all had a home-cooked dinner in the room as well (courtesy of my oldest son with his awesome culinary skills). 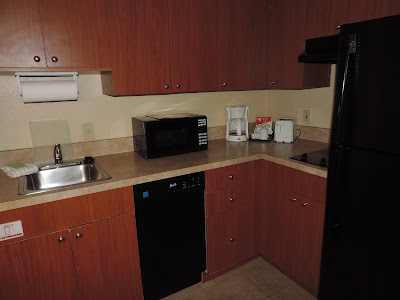 The kitchen had everything we needed to make family snacks or meals. A microwave, working stove top, and full-sized refrigerator/freezer were in there. We like to go out for at least one meal while on a weekend endeavor but the other meals we like to cook ourselves. 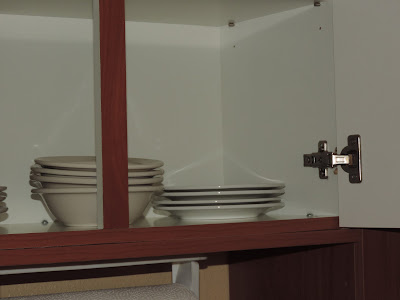 Everything you could ask for and more was in the fully stocked cupboards.The dishes were supplied, which was great... 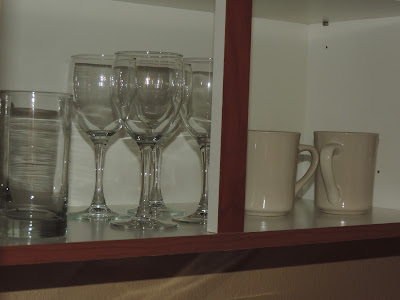 including a variety of beverage glasses for whatever it was you were drinking. 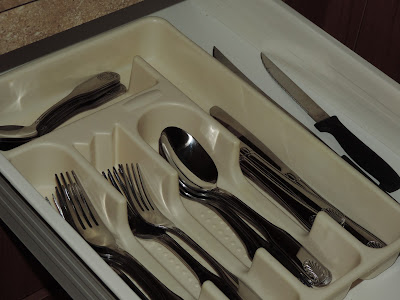 Silverware, pots, pans and serving utensils were there too, as was a can opener and more. 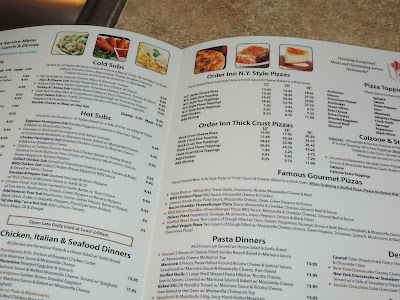 If you didn't feel like cooking, there was an extensive room service menu. You could order in with choices like sandwiches, pizza, full dinners (and more). We didn't use this option, but it is always nice to have it in case you have the need. 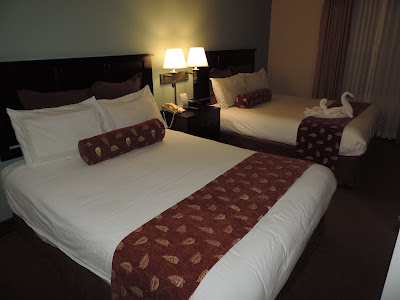 The double beds in the big bedroom met us with folded towel geese (always a fun touch) and there was a television in the room as well. 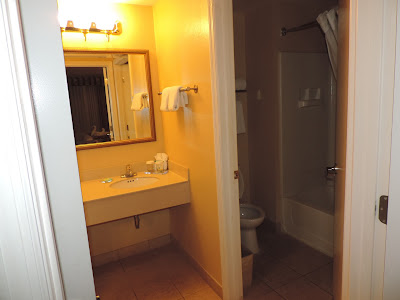 The bathroom could be accessed from the bedroom or the kitchen area, which was definitely convenient. We all also appreciated that the shower/commode area was entirely separate from the part of the room that held the sink and mirror. 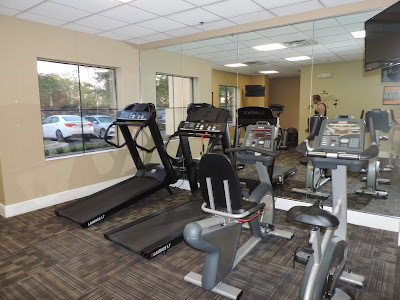 There was a gym if you wanted to get some cardio in. My oldest son doesn't like to miss a workout, so we went down to check it out. If you look super carefully, you can see him way in the mirror in the background. ;) 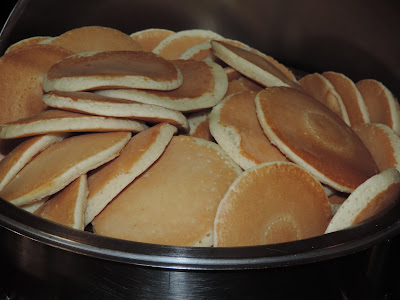 The first morning we were there, I took pictures of the complimentary breakfast buffet. Each day the items offered were different for both the hot and cold food selections. This day we had among many other choices, pancakes... 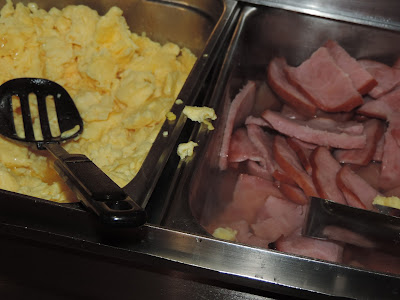 eggs, and ham. The fam. took advantage of the hot meal and filled their bellies before we took on a day of adventure. 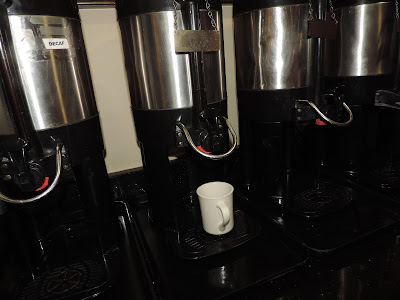 I opted for a bagel and coffee. :)  We all went outside to eat, but there was plenty of inside seating available as well. 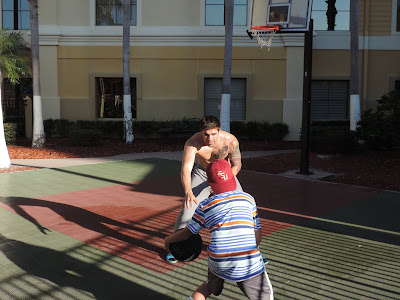 The second morning we were there, we discovered a basketball court on the property. My second youngest had just driven up to spend the day with us (he had work, so couldn't be there overnight) and he and his little brother went at it. He likes to call little man a 'bench warmer' to get his blood boiling. It always works too, and gets my youngest out there trying his hardest to kick big brother's rear end. The way he (little man) loves the sport, I have no doubt that some day soon he'll be able to take on both of his big brothers in a game. They don't believe it, but I've got my cards on him. ;)

You have to have your own ball to play (I think, though we didn't ask). Not a problem, my youngest son goes nowhere without his bball these days (insert laughing eye roll here).


Later in the day my oldest and youngest two kiddos went to the pool, as did my granddaughter. You can see her and her daddy in the pic above. I took that photo with my phone, so the quality is not that great, but I still love it. 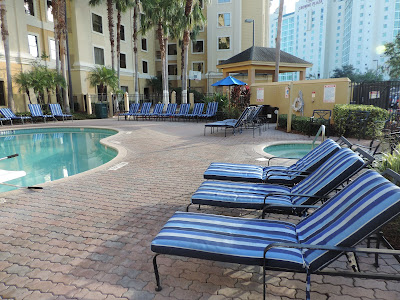 You can see the hot tub too, in the background just behind the loungers. 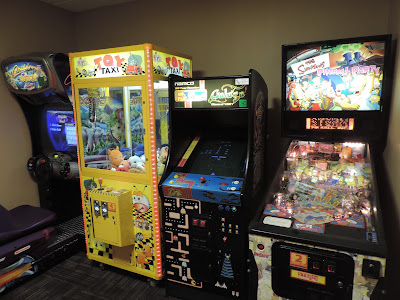 There's a little room for gaming entertainment. What's a game room without the claw machine? Not a game room at all. ;) The retro vibe in this room made it equally fun for adults to take a turn. Who doesn't like a bit of nostalgia thrown into a little gaming time. I'm a big fan of all forms of PacMan, including Ms. Pacman, so even for this mom/grandma, it was time to get my game on. ;) 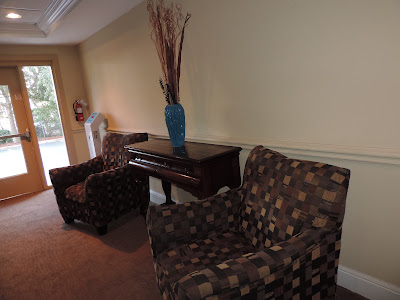 There was a rather large business center at Stay Sky Suites as well. There were seats for lounging/studying/working, 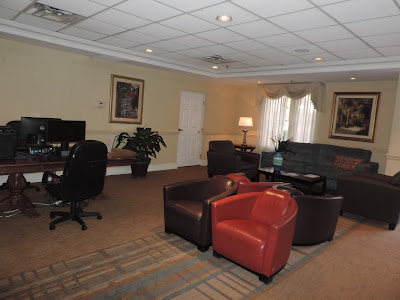 and there were computers that were hooked up to a printer too. We used this room to print out Blue Man Tickets for my son and his girlfriend who were going to see that show in the p.m. before they headed back home. 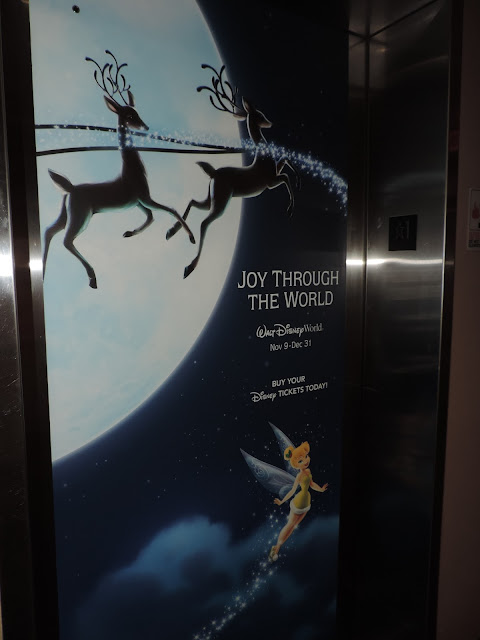 It's silly perhaps, to put up a photo of one of the elevator doors, but this one was so cheery and holidayeee (made up word) that it made me smile every time we used it. 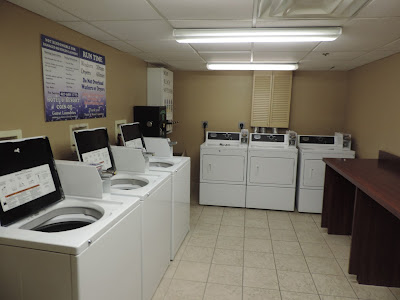 On a more practical side, if you wanted to do a load of laundry (or two) they had a place to do that too. Three washers, three dryers and a folding table made it so you didn't have to take home a stitch of dirty clothing, if you didn't want to do so. :)

There were also certain amenities we appreciated, like the free parking, unlimited free WiFi, and a concierge desk where we could purchase theme park tickets if we wanted. They also had one of those pamphlet stations with a bunch of flyers/brochures for things to do within the city. We took a couple home to remind us of what we'd like to do the next time we go back. Orlando definitely has no shortage on family entertainment options.


The location of this hotel was great as well. We literally had everything we needed within walking and driving distance. One of the evenings we were there, we walked over to the main strip that was close by and did a little gift shopping. There were restaurants and fun places to visit very close by (including a three-story playhouse McDonald's that sold gourmet pizza and cake...say what?!?), a dinner nightclub we have visited before, gifts shoppes, sit-down restuarants, places of interest (the museum-type places intrigued me and we will be back!) as well. For the location aspect of this hotel, as well as every other area you could be looking for in a family weekend getaway, you simply could not go wrong booking this hotel. We loved everything about it.