Be a Detective for the New Year: Sleuths Mystery Dinner Show in Orlando 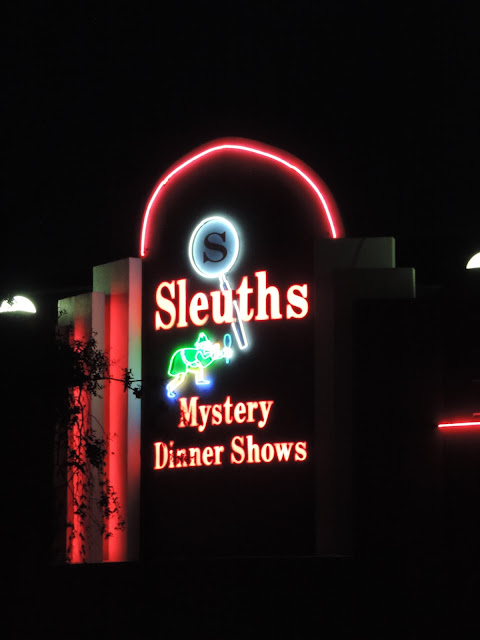 If you're looking for a fun way to bring in the new year, or a great way to spend an evening any time of the year, Sleuth's Mystery Dinner Show in Orlando, FL. provides a unique way to get together with your family, significant other or celebratory crowd (there were a lot of birthday parties gathered when we went, which I thought was such a good idea!). 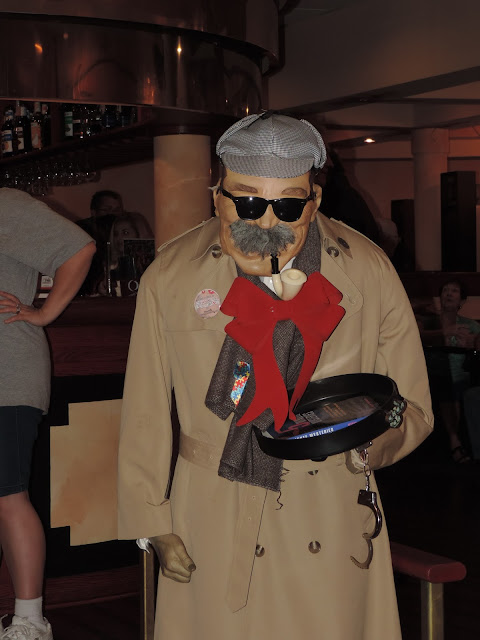 This (fake) fella and a (real) announcer greet you when you walk in the door. The latter, who is in character, keeps things in order and lets you know when it's your turn to go to the next building. The first building is where you go to purchase your tickets and mingle while you wait for dinner to be served. There are magic shows and such you can pay to see while you are waiting. 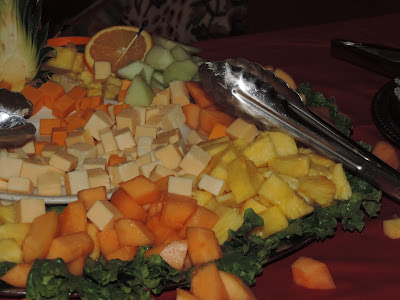 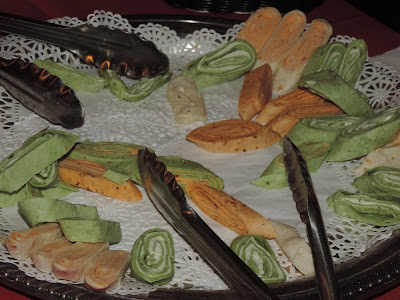 wrap slices are out for you to nibble on if you wish, while you wait. They are replenished often and kept fresh. 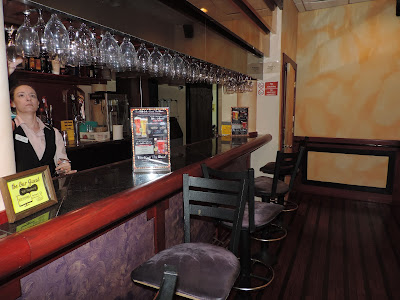 A bar is there if you're interested. I believe my son purchased a bottle of water there. 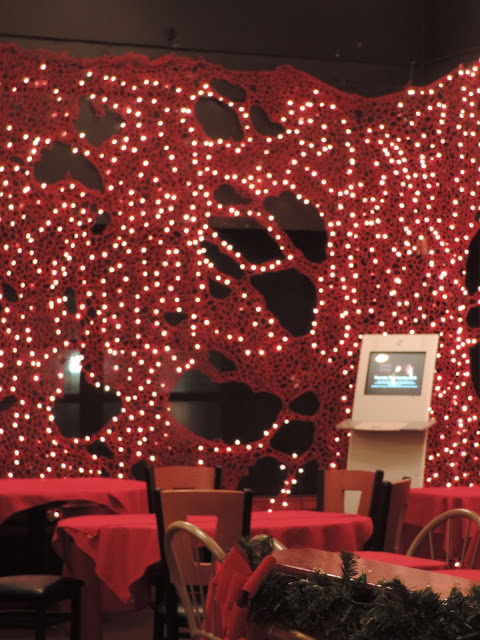 There is an area in the back too, where our party eventually went to sit while we waited our turn to be called (we went kind of early). I am not sure if it's the norm to wait so long for the dinner to begin, but if it is, I recommend not going early...unless you're fine with just sitting and visiting your family/friends. We were, so it was okay. If you're not expecting the wait though, it could be a bit much. 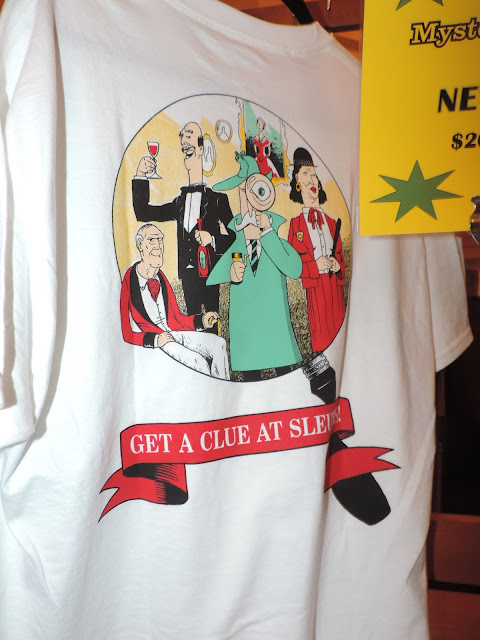 If you're in the mood for souvenirs, there's are plenty of shopping opportunities all around you in that first building too. 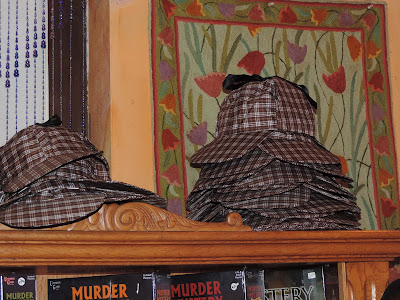 I thought these sleuth hats were pretty cute. :) 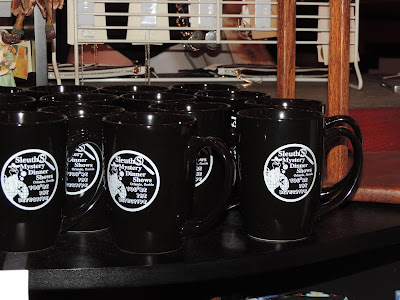 I like my coffee cups big, so these got me excited. There were a ton of items to choose from, just a few were related to the show itself, but those were my favorites. I know a lot of people like to be more organic when they travel, but I'm not ashamed to say I'm touristy all the way, and I love it. :) 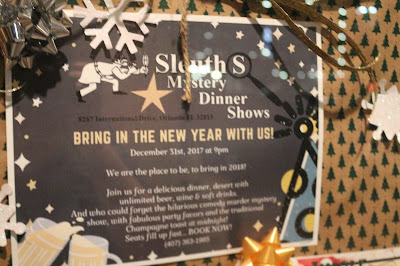 When it was time to head on over to the dining room, the host called us over in small groups.
I saw this sign on the way over and snapped a pic. For sure, if you're looking for a fun way to bring in the new year, the Sleuths Mystery Dinner Show qualifies. 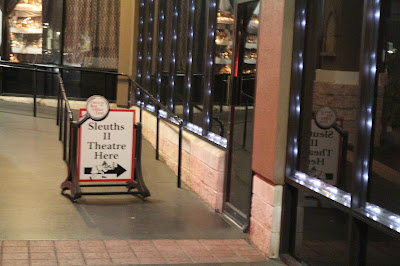 The big round table we were direct to seated our group of (6) along with another family. They were great and we all got on just fine! It was nice to expand our social group for the show, and work with others outside of our own family to try and solve the mystery. 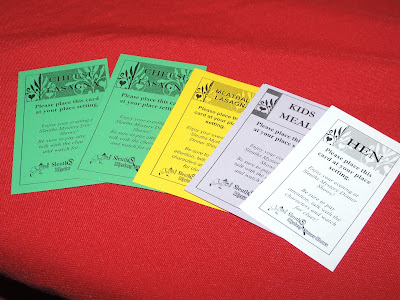 For dinner you could choose a meat or meatless lasagna, or hen. Children were given chicken fingers, green beans and macaroni & cheese (you can never go wrong with that for kids). You could pay a small amount extra to get prime rib. 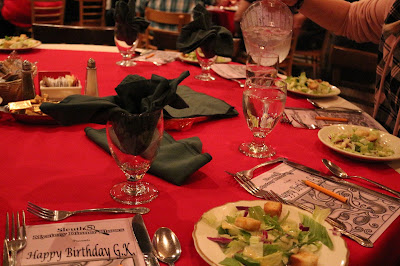 Along with the salad and water they also brought out a basket full of bread rolls, cheese dip, crackers and most importantly... 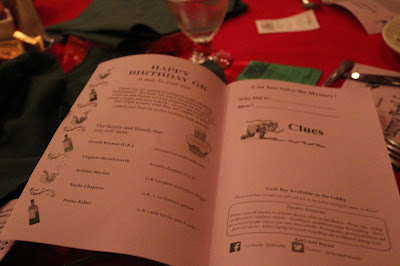 a pencil and our sheet to write down clues. Every time you heard something you thought could be relevant later, you wrote it down. The purpose was to try and narrow it down to who you thought was guilty (of committing the crime). 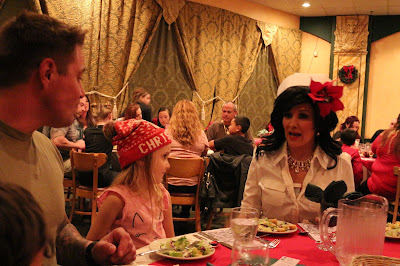 Before the actual show began, the characters came around and mingled with the crowd. The 'nurse' started a conversation with my granddaughter, 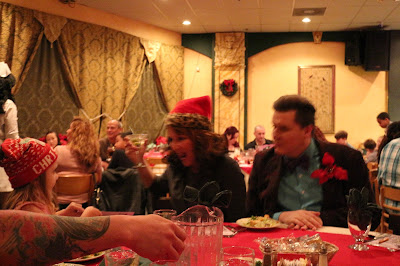 and not to be outdone, two other relevant members of the cast came to sit with us as well. Was one of the above three the 'killer?' You can bet all of the information or clues they gave us during their casual conversations were jotted down on our sheets after they walked away. 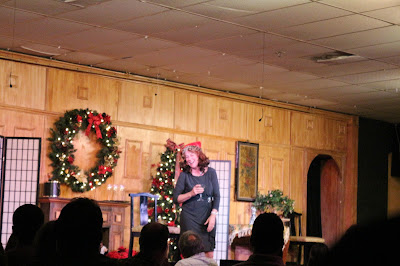 The show lasted a couple of hours, but they kept it moving along nicely. My 4-year-old granddaughter was along and she held up fine (though she did ask where the food was a couple of times). ;) 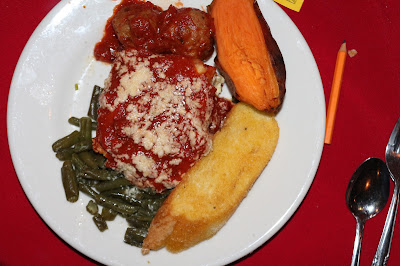 When the food did arrive, it was actually pretty tasty. This isn't my dish above, but it was hard to get photos in the dark. This was my oldest son's meal: lasagna with meat balls, green beans, sweet potato and garlic bread. I had the meatless lasagna and it was pretty good! The sauce was tasty, and the food was warm when it arrived. The serving staff did a great job of clearing the table promptly but not rushing you as well. Unlimited beverages are included in the ticket price. 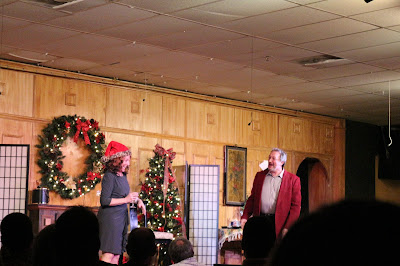 You got to eat as the story continued. The poor gent on the right was the 'victim' in our show as he did indeed end up a goner. All throughout, you and those at your table collaborate (or you can work alone) to try and determine 'whodunit.' As the show progresses, and it was funny, with some jokes that were thankfully over the kids' heads, all of the clues start to glaringly point at one character. Of course you know it isn't that character because that would just be too obvious. 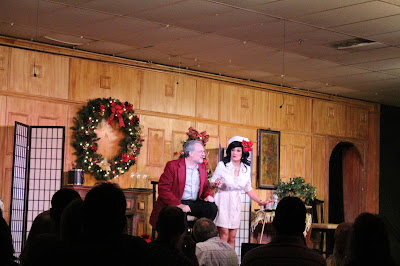 There were a few suspects though, and if you've written your clues down or listened intently, you will have some insight to add to the discussion at your table of who you think is guilty. 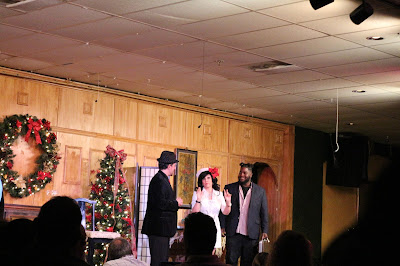 There was audience participation in a couple of different ways. First, they did recruit a guy from the audience (far right) to come in as the attorney. Then, at the end of the show, after the deed has been done and the characters have all stated their 'innocence' and why, each table is expected to recruit one spokesperson to ask a relevant question. We selected the tween girl at our table from another family. She did great.

As they circle around and each table asks the cast their one question (with a microphone), you can revise your thinking about who did it and why you think so. I never get these kinds of mysteries right, but this one I nailed from the get-go. Surprisingly, I was one of a few who did. Most thought it was NOT the person who was guilty. You raise your hand if you did get it right, and they bring you a little prize. I didn't raise my hand, because by that time three hours had passed and we had 2 kiddos with us, so it was time to go home. We ate our dessert (you get a choice from two) and left happy. It was a good show, and I recommend it if you're going to be in the Orlando area. It is great for anniversaries, birthdays, and more...and it would be an awesome way to bring in 2018.