Just Visited Ripley's Believe It or Not! Museum in Orlando!

The building looks crooked, because it is crooked!!! Actually, it was meant to be your typical straight building, but a sinkhole decided to alter those plans. Fortunately, the architect and builder were talented enough to make it work anyway, and it ended up being just perfect for this type of museum, don't you think?

That's just the beginning of the weird, the awesome, and the oh my gosh! Three of us recently took a trip to the Ripley's Believe It or Not! Museum in Orlando, and we're still shaking our heads in amusement/amazement when we think about it. With an awesome collection of items to really be appreciated, whether you like them or not (some you will, some you definitely won't), this museum is a must-see. 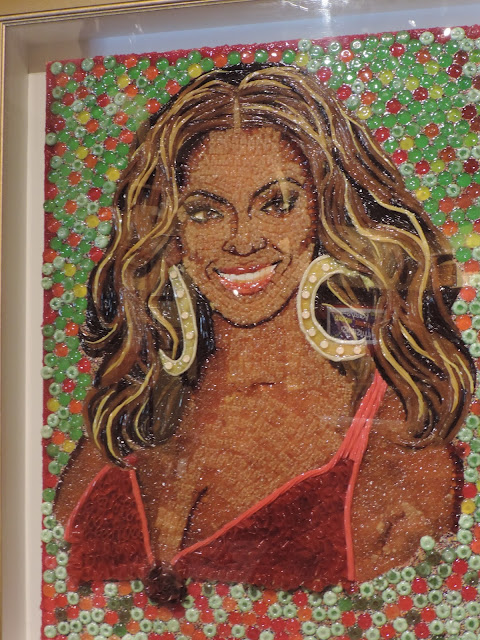 Several awesome pictures made of various items met us at the front entryway. It was this portrait of Beyonce, made entirely out of candy that caught my eye. It was one of quite a few items we would come across made of colored sugar or candy. Each one was impressive in it's own right. 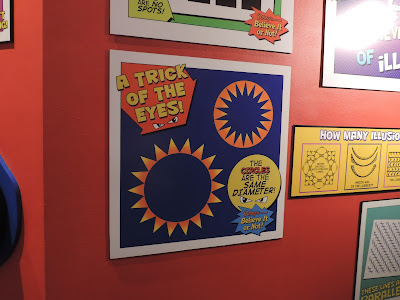 The optical illusions on the wall were fun, and there were a whole slew of 'em! 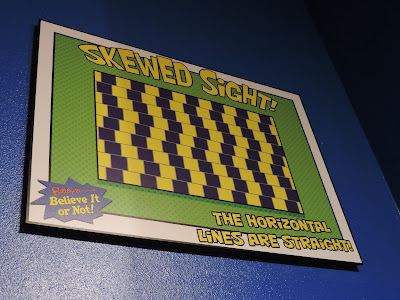 Some I really couldn't figure out how they did it, or I couldn't see what others could...like the lines above. To me they just look slanted. 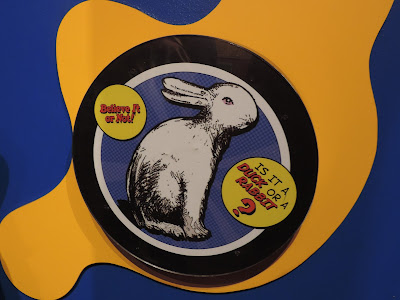 Others I could detect right away, like this duck/rabbit. I could see both but my youngest son could not. Can you? 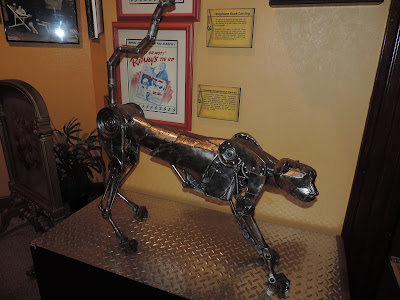 Some of the mediums used were surprising. Skill sets were always obvious. Photographs were definitely in order. These were things we were probably only going to see once in a lifetime, and we were going to enjoy every second of it that we could. 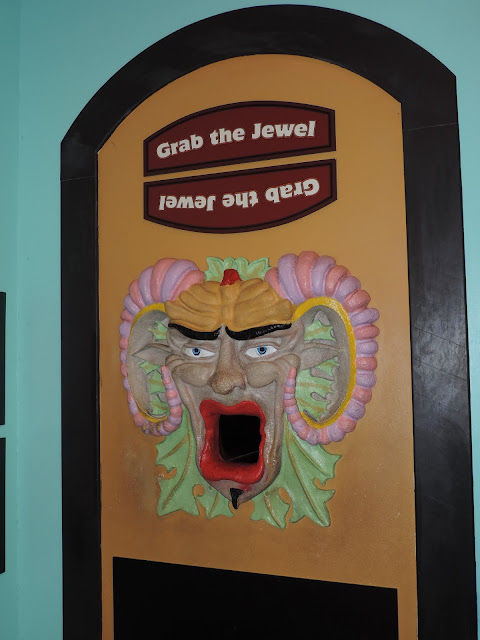 This picture I included because it makes me laugh. Word of advice, never reach into an opening that says 'grab the jewel' if you are in an odditorium. ;) 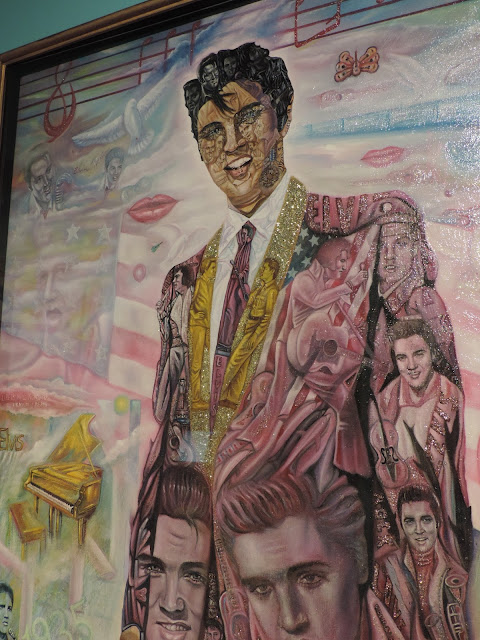 This Elvis picture is made up of, well...Elvis pictures. Pretty fun, right? And pretty awesome. There were other Elvis Presley items...this one was my favorite. 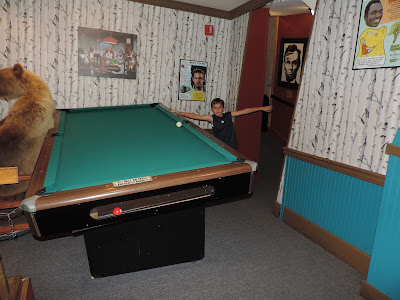 There was a room that was slanted. There was a ball rack on the side, and when you put balls in it, they actually rolled uphill. Yeah, that was a fun thing to do, and we spent awhile playing with it too. :) 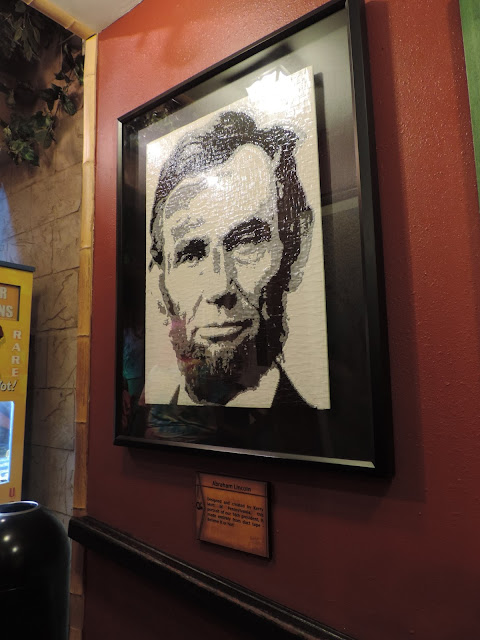 The Abraham Lincoln picture you see here is made entirely of duct tape. I wonder how much time it took to make it. This was made long before duct tape art became trendy too. :) 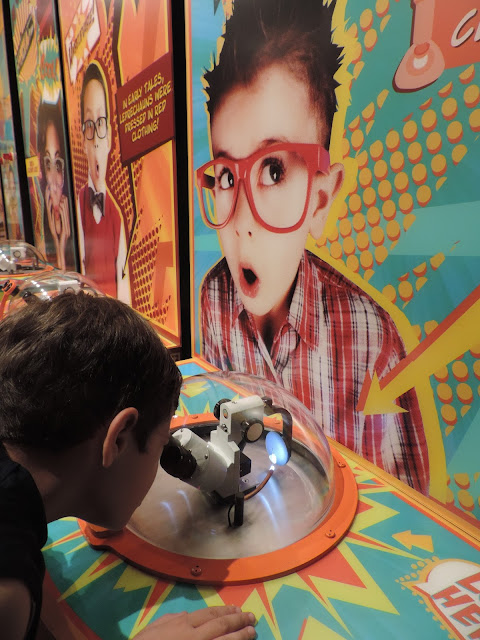 The teeny, tiny displays were a big hit with both my daughter and my son. You literally had to look through a microscope to see the things on display. Each item was perfectly made, which is amazing considering how small everything was to work with for the artist. 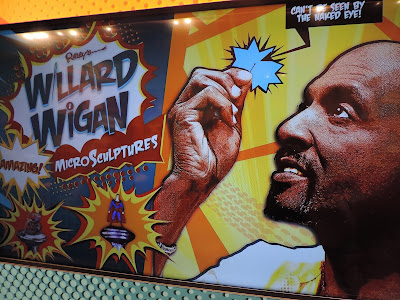 Choosing this type of art must be painstakingly slow, but look how it paid off? The artist's work is now in a world-famous museum. 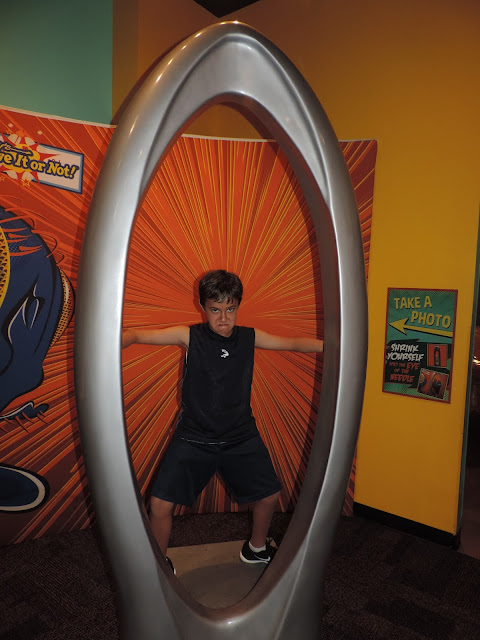 There was an 'eye of the needle' photo opp that my son thought was cool. He goofed off a little, and then his sister came in to play too. 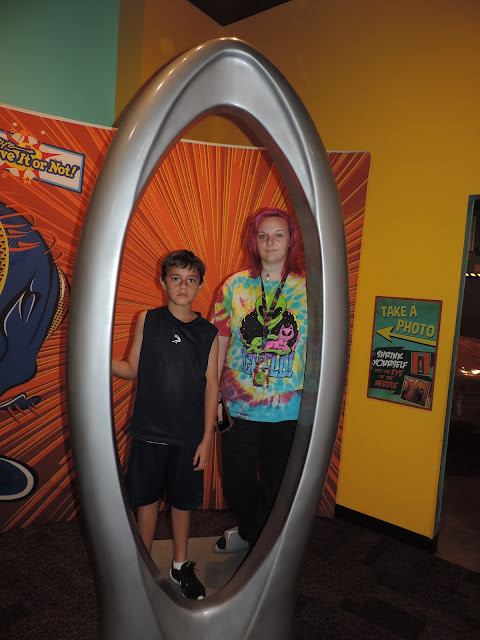 Yes, her hair is pink...or it was that day. She loves to change her hair color, but a new job had her dying it a 'normal color' now, which she did. I keep telling her she should go into Cosmetology because her friends have her do their hair and nails, and she's great at whatever she does, but that's not where her professional interests rest. She is currently in her first year of college, working towards her Psychology degree, which is way over my head. I do suppose though, that her career choice will pay better than Cosmetology. ;) 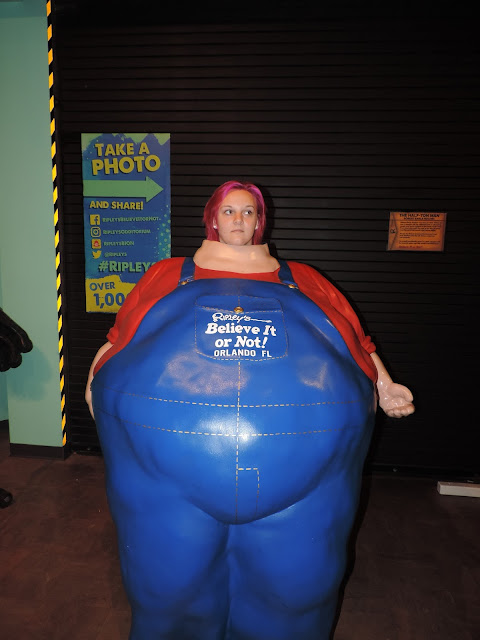 Word of Warning: You have to be careful in this museum because it's oh so easy to put on a lot of weight in a very short amount of time. One second my daughter was slender, and the next...well she was downright plump. ;) 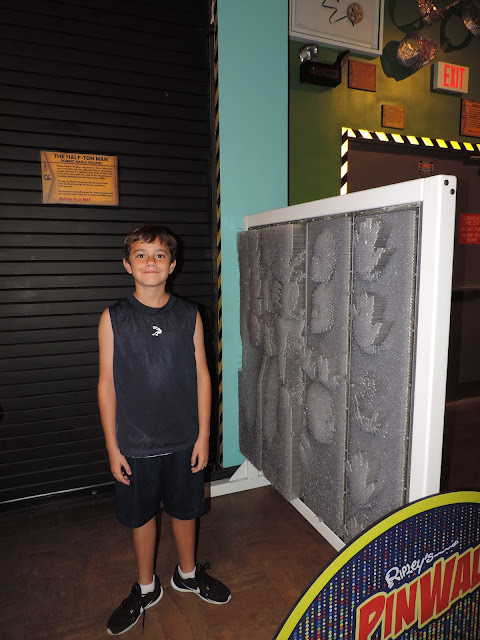 No one could resist the body shaper, where you put your hand (or whatever, some people put their face, ick) in the metal pins on one side and the shape pushes through to the other. 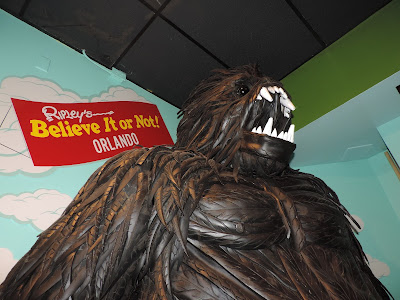 This big guy (see his head touching the ceiling?) was made of tires. 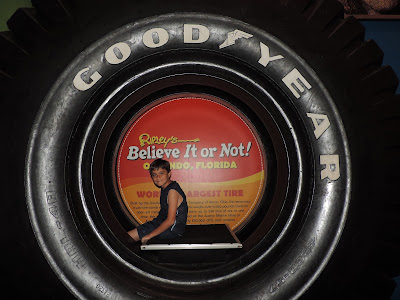 Speaking of tires, my son sat right smack dab in the middle of the World's Biggest Tire. He's 54" tall, and look how small he appears in there! 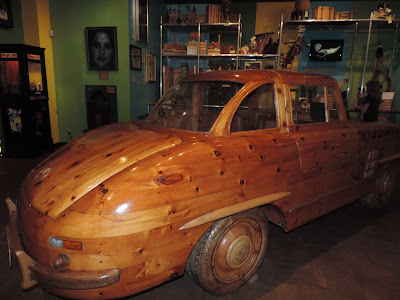 The Mercedes made of wood had everyone taking pictures. The tires, the dash, the body...everything was made of wood. It was really a sight to see! 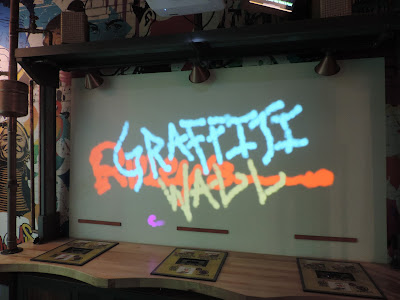 I thought the graffiti wall was cool. I was using this to write on the air while I took a phone call. That was all well and good, and I was having a grand old time, until my daughter reprimanded me for missing her getting her hand molded out of wax. -_-  Isn't that how it goes though? The only time I got an important work call during the whole trip. Still, the graffiti wall was fun. Playing on it made my boring phone call go a lot faster. :) 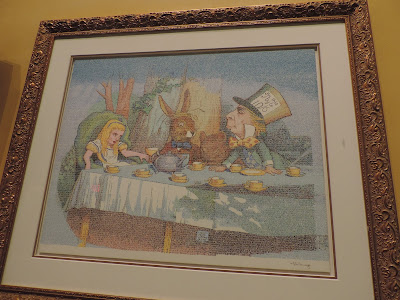 I couldn't resist snapping a picture of this Alice in Wonderland scene. This is made entirely of the Alice in Wonderland text (the actual story) and took the artist over 350 hours to make. If you look very closely at the picture, you can clearly see the letters. 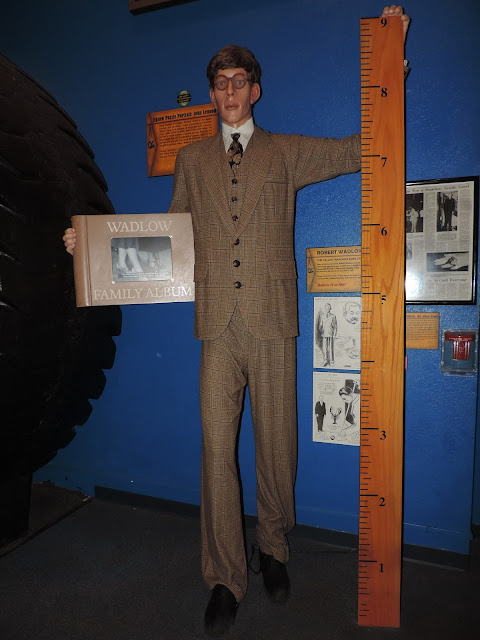 In this 10,000 square foot facility, I think the display of the world's tallest man (he really lived and was this tall) was the favorite. No one could resist standing next to him and taking a picture. 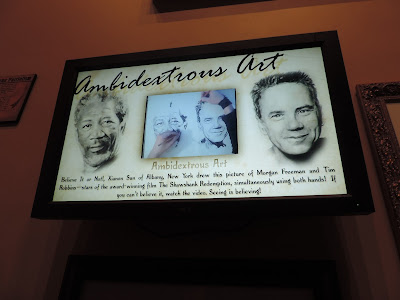 I thought this Shawshank picture was great, not because of the accuracy of the drawings, which was spot on, but because the artist drew both sides at the same time, using different hands!!


I'm almost embarrassed to admit that this guy was wax, and I only saw him out of the corner of my eye. The light on his phone flashed every few seconds, and I was patiently waiting for him to finish before passing him and whatever it was he was taking a picture of, until I realized he wasn't moving, lolol. 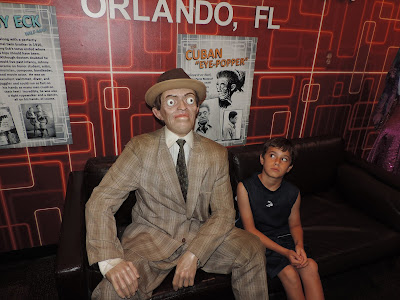 Of course there were a lot of weird things in the museum too. It wouldn't be Ripley's, if there weren't some really crazy things to see. 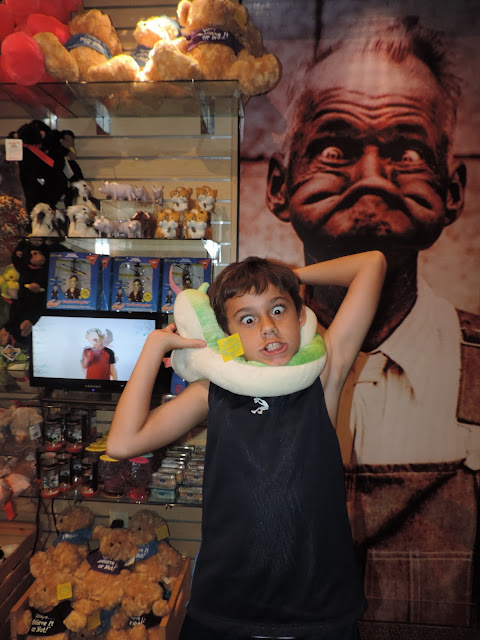 The craziest thing I actually took home from the gift shop is in the picture above (the cuckoo little boy, not the snake). ;)  We picked up some trinkets to share with friends on the way out, and got a shark's tooth for my son. He proudly displays it on his desk, right alongside his new Ripley's book he got upon entry (that tells you what you're seeing as you walk through the museum and allows you to participate in a scavenger hunt while you're there!!).

We had a great time, and are so happy to have made the visit. I think a trip here, or tickets as a gift are a great idea(stocking stuffer?) for most anyone, adult or child. The Ripley's Believe it or Not! Museum is located on International Drive in Orlando. It is open daily from 9 a.m. - midnight (last tickets sold at 11 p.m.) You can learn more by visiting their website. You can also follow them on Facebook, Instagram and/or Twitter.
on November 22, 2017