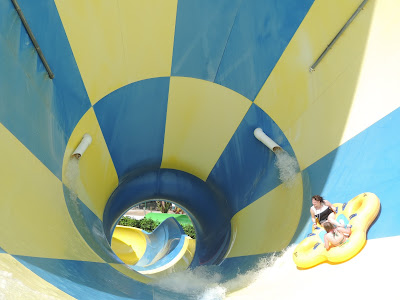 That is my daughter laughing a LOT on the raft. She had this bright idea that perhaps we should go to Rapids Water Park in Riviera Beach, Florida. Have I mentioned yet that she is brilliant? We had the most fun we've had all summer, and it's because this is no ordinary water park. Not by a long shot. 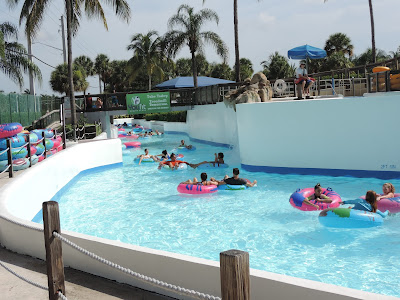 In addition to the 1/4 mile Lazy River, this park also rested on 30 acres of land and had 35 Water Slides, including a dual racing slide that was 7-stories tall. I have to tell you, that you know a water park is awesome when your legs still hurt from walking and climbing stairs two days after the fact. True story. 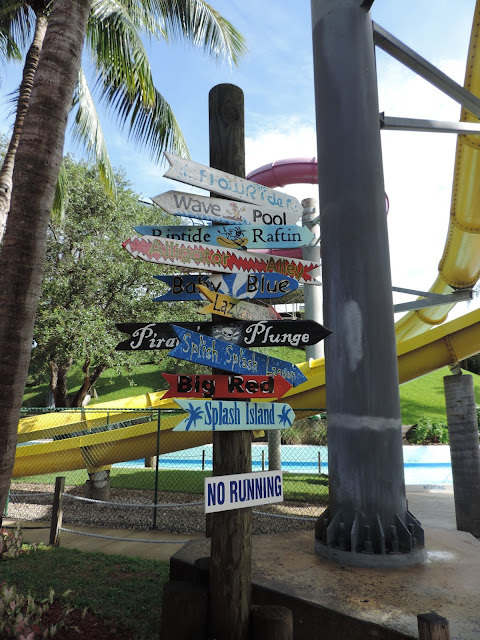 Rapids Water Park caters to everyone in the family, with slides and things to do aplenty, 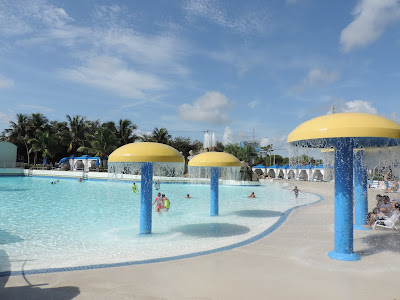 like this wave action pool (that we visited twice). 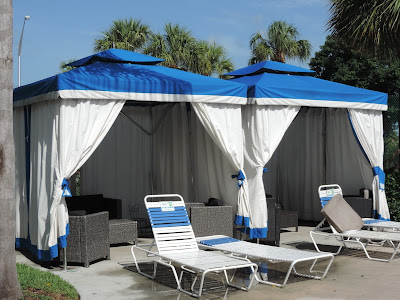 They also offer ample seating everywhere you go, including shaded picnic tables and cabanas to block you from the sun (or rain as it turned out when we were there). 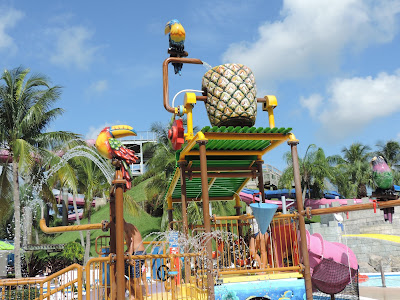 There were various areas for the younger crowd, making this a fun family park because there was literally something to do for everyone...all day long if you wanted, and of course we closed it down... or at least 4 of us did. My 2nd oldest son brought a friend (who said her ticket was worth the price and then some!) and they had a blast, but left a couple of hours earlier than we did (because he's getting old... kidding!). :)


Speaking of my 2nd oldest son, that's him on the left, and on the right is my 9-year-old. Evidently the child before my youngest has a fit and wanted out right before it was time to push the button and shoot down. His brother couldn't get over how brave little man was for sticking it out and going through with it anyway. I wasn't at this ride, because I was tuckered out at this point, and hanging out happily by myself over in the lazy river (ha! who's really the one getting old?). :) The girls took this picture and a video though. They each had plastic cases for their phones. That was smarter than me.

I was running around taking pictures and then having to go back to the locker to store my camera so I could enjoy things. Rinse (literally?) and repeat. It was pretty comical. I finally took the camera to the car so I'd leave it alone and just have a good time. I do love my pictures, but storing the device was a smart move. Like I said before, there's a lot of land in that park, so all that backtracking to the lockers was making my tootsies tired. 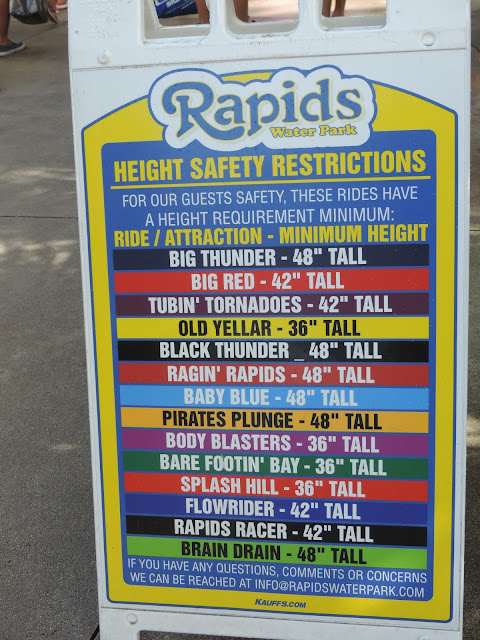 Some of the rides has height and/or (usually combined) weight restrictions. There were people at every station ensuring those requirements were met. Good to see! 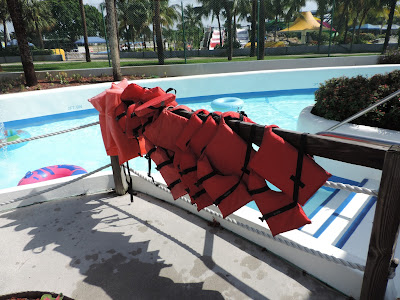 And speaking of safety, there were life jackets available all around the park too. Definitely something you want to see. Of course, you could also bring your own. Had I brought my granddaughter along, we'd have definitely used one. 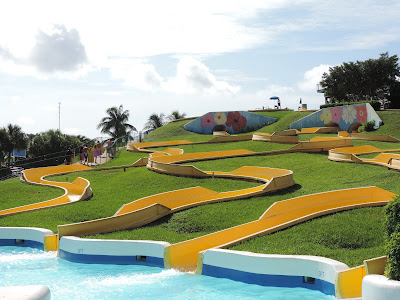 This maze of water slides was quite possibly the only ride we didn't go on when we visited, and it's not because we didn't want to, it was because we just kept choosing other things to do that would take us out of the area. The kids did all go on a 6-man racing slide though, belly first, and that looked like a blast. I stayed off of that particular one to get an awesome picture. The park employee shooed me out of my perfect spot though (I told you those guards are on top of things) and sent me to the observation deck. I ended up getting a picture of them all racing with about fifteen other heads blocking them, lol. I should have ridden the ride. ;) 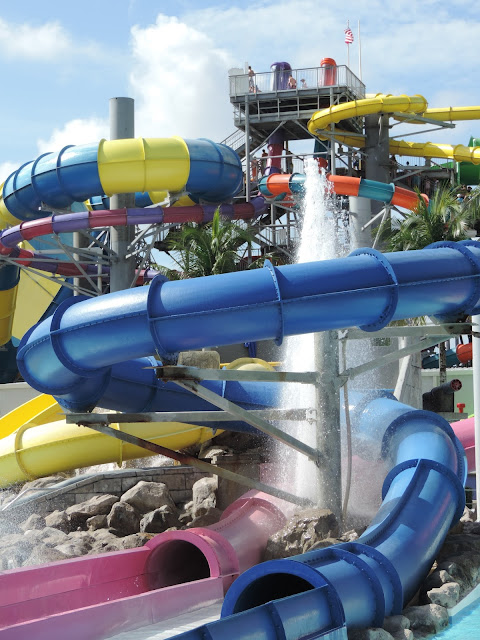 Truly this is a waterpark like no other that I've seen. It was so great to be at a place all of the kids could enjoy no matter their age. My oldest had to work, but if he'd have gone, I know he would have enjoyed it too, and he's almost 30 (I have a son who is almost 30? How did that even happen so fast??). ;) I'd love to go back again when he and his family can join us. 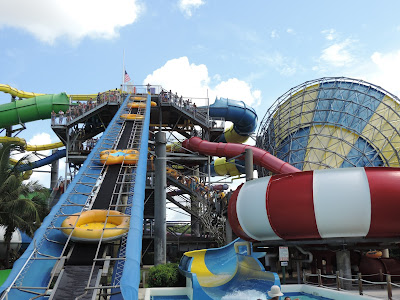 This lift took the rafts to the top for this ride, and I thought that was so much better than other parks that have you carry your rafts up. 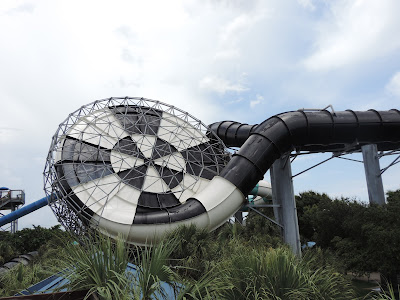 This ride was so high up in the air. There was a bridge you had to cross to get over to this side of the park, and when were on top of it, we were at about the same height this was... this one was dark all the way through too. Talk about a thrill ride! 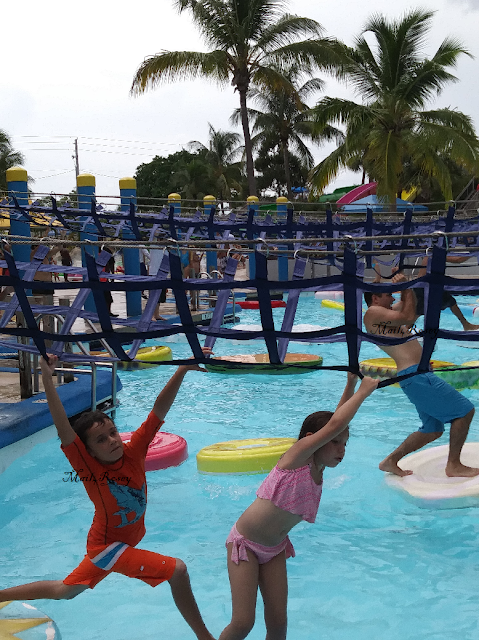 If you look carefully in the back, you can see my grown son trying to race my youngest. The problem? My youngest got in a lane that had a person in front of him, lolol. The victor was of course, his big bro. ;) 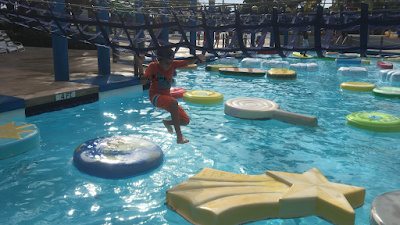 He got this cross over to himself later in the day because we were the first ones back on that side of the park when the rain showers (accompanied by thunder) moved on. They shut the park down temporarily if thunder and/or lightning are seen, of course. There is plenty of shelter for those times. It is rainy season here in South Florida, so showers are expected daily. Thankfully they leave as fast as they arrive. 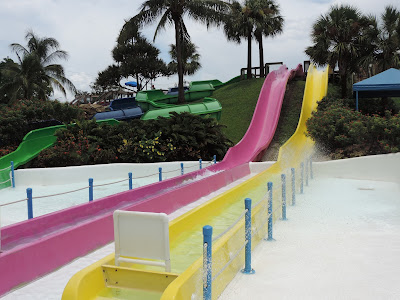 We actually liked when the rain would come because it thinned out the lines and we could get on without having to wait. None of the rides took a terribly long time though, even at the peak point of the day. I think we waited 20 minutes for one... no big deal.


This one is the one that had that 20 minute wait. I don't know who that surfer dude is on there doing flips, but he did far better than anyone in our party did, so we'll feature him for the blog post. ;) He was quite the sensation, and I'm sure he's on social media galore because everyone took their phones out to record him taking the ride. 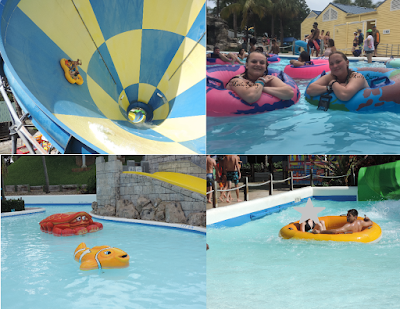 The lifeguards were plentiful and paying attention, which was awesome. I think they must go through some pretty extensive training to be so consistently aware. I loved that, a lot!

We had such a good time here. It's definitely a place you want to visit before summer is over, and there's good news about that, a BOGO deal!

Buy One Ticket Get A Return Visit Free!

The Rapids Water Park is located at 2489 Port W. Blvd in Riviera Beach, Florida (Palm Beach County). If you visit between now and the end of August, you will get one free ticket to return before the season is over, with every ticket that you buy.

I highly recommend a visit. This park gets 5 out of 5 stars from me, and I'm headed over to Trip Advisor to add my rating right now before I forget about it.