Magical View Room at Park Inn by Raddison in Orlando


I used to think that it was ridiculous to pay a lot of money for a hotel room, and then not hardly use it all because you were out and about all day and night long doing something in the area. Then I stayed at a budget motel... to prove my point. Let me just say, a). I was wrong and b). never again!! So this trip, we opted to go back to our norm and stay someplace so much nicer. The Park Inn by Radisson Resort & Conference Center, located in sunny Orlando, Florida was in a word, 'perfect!' It's not 'cheap' but it's definitely affordable and you and your family will love it! 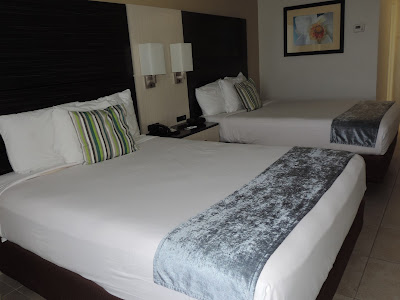 The beds were large and comfy, several sizes/types of pillows were provided, and there were sheets and bed coverings of different consistencies all tucked in rather nicely, so that everyone using them was happy. 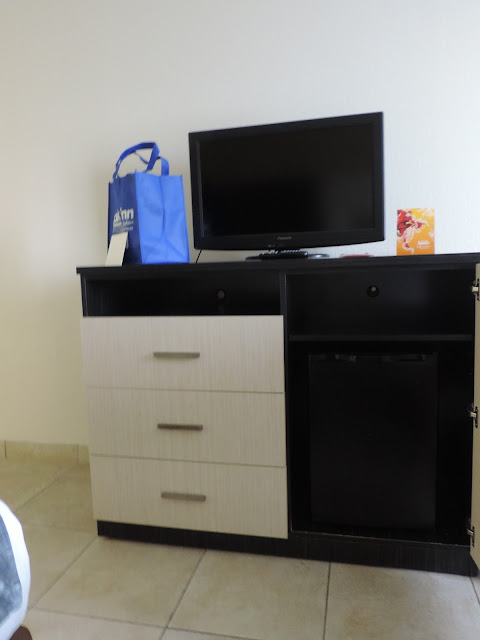 The room was spotless! The air conditioning worked wonderfully well and was whisper quiet. There was also your standard items included, like a personal safe, an easy chair...a closet, and a dresser and bureau for your clothing and personal items. The flat-screen TV got a ton of channels, but we were too busy playing to enjoy any of them. If you need wi-fi, they've got that too. It's complimentary and it's fast! 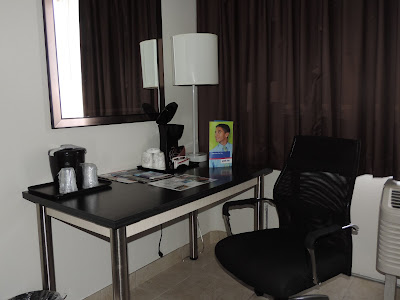 The desk area was right next to the window, which I liked. The rooms have complimentary wi-fi. And the view from that window...


held Animal Kingdom's rollercoaster (and the Epcot ball) by day,

and fireworks by night! Yep, you could see the fireworks right from the room on our side of the hotel facing the parks. Ask for a "Magical View Room" when you book.

Then when Epcot's show was over, Magic Kingdom's began!! It was spectacular, and there were no crowds to fight to get out when they were done. ;) 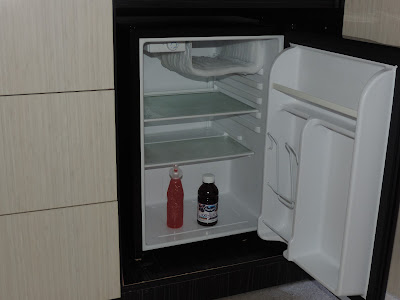 There was a mini-fridge to keep our drinks cold. I was surprised there wasn't a microwave, but that was okay because the hotel also had very affordable hot dining in the main area on the ground floor. 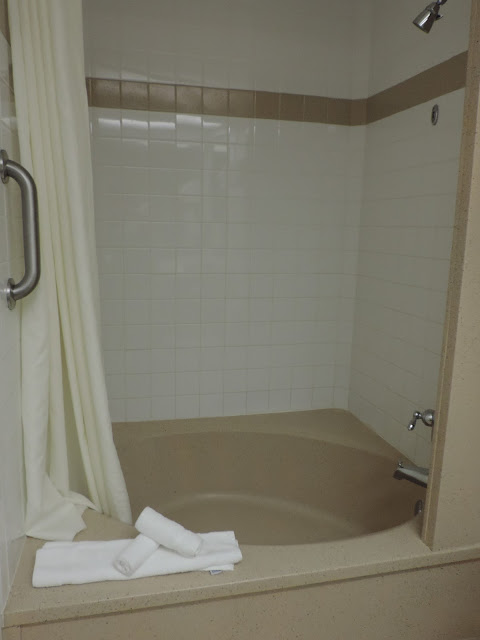 There was a deep soak garden tub in the bathroom. That was the first thing my youngest wanted to do...take a big 'ol bubble bath. And he did. ;) 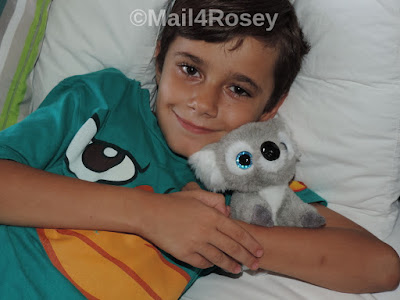 My son fell in love with a big-eyed Koala that you could buy (among many other things) in the lobby downstairs.

This store had everything in it you could possibly need, including chargers if you lost yours on the way in (*ahem*), toothbrushes in case you remembered everyone's but yours (again, *ahem*), swimwear (I didn't forget those, but if I did...everything was there, and so was swim gear, including noodles...they even had flip flops!), snacks, drinks, postcards, souvenirs and more!

This wall made my son very happy. It's a SEGA station with over 100 Sega Genesis games programmed. Old School Mortal Kombat was on there (before it got too graphic like it is today....just my opinion ;) ). What a fun idea to add this area to the hotel. I texted a picture to my two oldest boys because they loved Sega when they were kids.

There was also a little mini area for kids to watch a movie. You could ask them to reset the movie at any time if you wanted to watch it from the start. And look at those chairs!! Cute little Mickey Mouse chairs. I thought this was such a thoughtful idea. Just lovely!

There was an arcade area for the kids too. The children's areas got really popular when a heavy rain happened through for a few minutes (as is prone to happen in Florida). :) There were activities to sign up for and a balloon guy too, in the daytime hours. 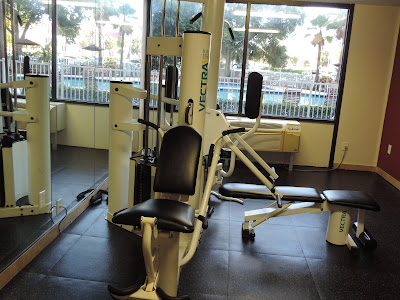 The fitness center was on the main floor for the adults. I saw a sign that said there were basketball and tennis courts on site, but we didn't get over to visit those. Next time!

The lobby had spacious seating for those who were dining.

You could eat at Pizza Hut Express (nothing was overpriced, hard to believe in a hotel, but definitely true!)... 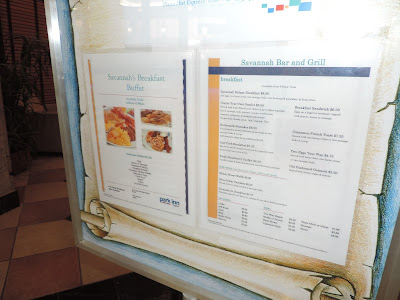 or you could eat at the bar and grill restaurant (where they also had a big breakfast you could purchase in the mornings).

The business center had internet-connected computers and a printer.

The ammenties went on and on in this hotel. Iced or lemon-infused water at the front desk, the availability to buy your park tickets, get your park maps for no charge, peruse the brochures for other attractions in the area, etc. were all right there for the taking. There is also a limited shuttle service that does go to the parks, so be sure to check out the times and requirements if that's something you would be interested in using. There is also a car rental service in the lobby, if you've flown in and would like to drive.

In the lobby, there was ample seating everywhere, so you could do what you needed to do and the others in your party could chill. 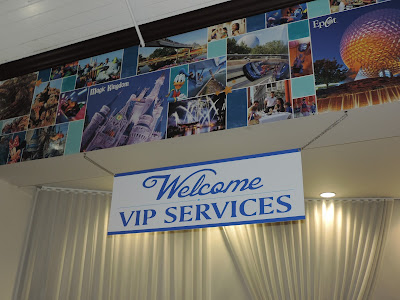 The awesomeness didn't stop there. There was a VIP Services desk at the front, with a very helpful lady to answer questions. 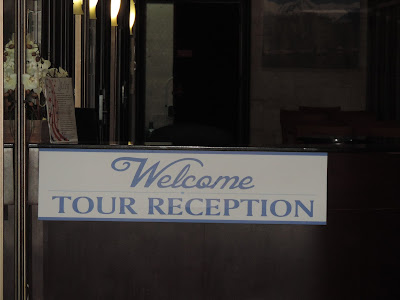 There were all kinds of things happening too, that weren't room related... 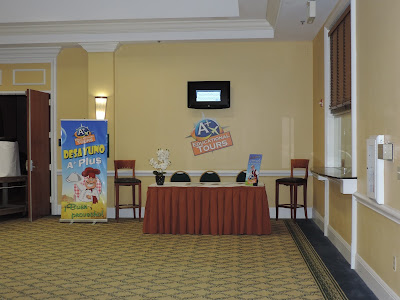 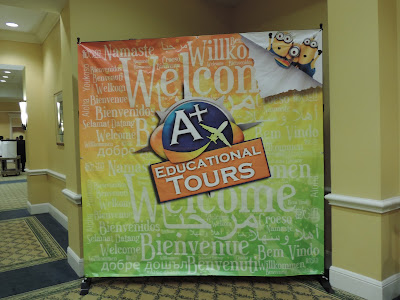 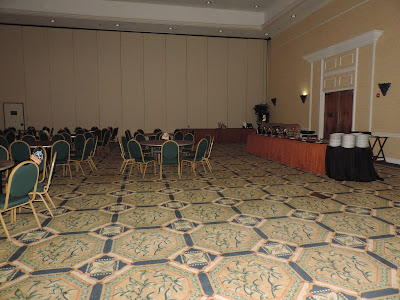 and the potential to host most any kind of event you might want or need. Everything was clean, and very inviting. The Park Inn by Raddison Resort and Conference Center Orlando can accommodate up to 1,300 people in their full-service conference areas. 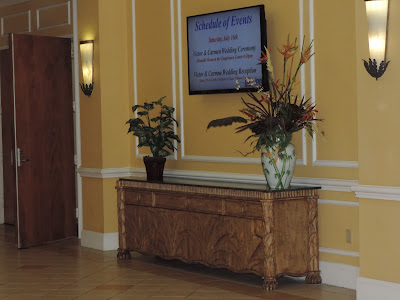 I know when we were there, a wedding was going on, as well as some other events. We saw the people all dressed up from the former, and all of the events were loaded on a marquee screen when you entered that area, welcoming the big events and goings-on. This area was not something you would see if you stayed in the main part of the resort. We just found it moseying around taking pictures for a review, so you could see all the Park Inn by Raddison has to offer.

There were two swimming pools. We used the one out front in the early a.m. This pool area is in the main area so you can access it from the huge wrap-around lobby, it also has easy access to the restaurants/bar area. There was a hot tub here too, but it's so far back in this picture (by the palms) that you can't really see it. 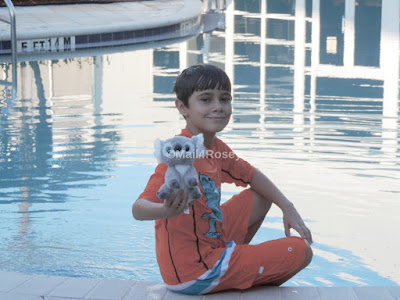 The pool area in the back of the hotel was also nice. If your room was on this side of the hotel, it was definitely handy to not have to walk to the main area...especially if you just wanted to take a quick dip.

The bathroom had a retractable clothesline built into the wall for hanging those wet suits over the tub to dry. I wish every hotel room had this, I never know where to put our wet clothes. Little extra touches like this make me happy. :)

The Park Inn by Raddison has a Sports Approved Program too, so if you're taking a team up to the Orlando area for one reason or another, this is the hotel to book! It is also the place to be if you're headed to any of the popular attractions in the Orlando area. It is a Disney Friendly Neighbor hotel, so you know it's going to be great! As for location, you would be hard-pressed to find a better spot. 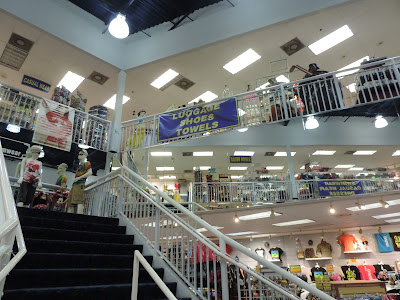 In addition to the Disney Parks and Sea World that are close by, you'll also find area shops, like this two-story souvenir store we could walk to from the hotel, as well as many restaurants if you want to eat off-site, and a million and one things to do. It is a safe location, that is at the end of a side road off of the main street, so while you're at the hotel, it's like you're in a world of your own, and as soon as you drive to the end of the side street, you're back in the thick of everything.

The Park Inn by Raddison Resort & Conference Center Orlando was an absolute delight. I highly recommend it to anyone going to the area. Our family loved absolutely everything about it, and we will definitely return again.