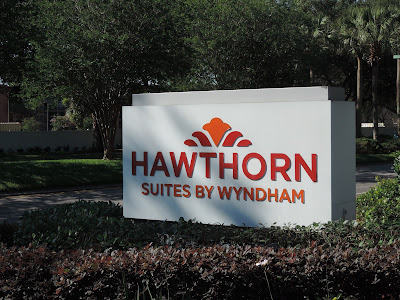 We shouldn't have been so late, and it was entirely no one's fault but my own. The kids were antsy, they wanted to go to Orlando. ;)  We left home so late that it was very much the p.m. by the time we arrived the Hawthorn Suites by Wyndham Orlando / Lake Buena Vista. 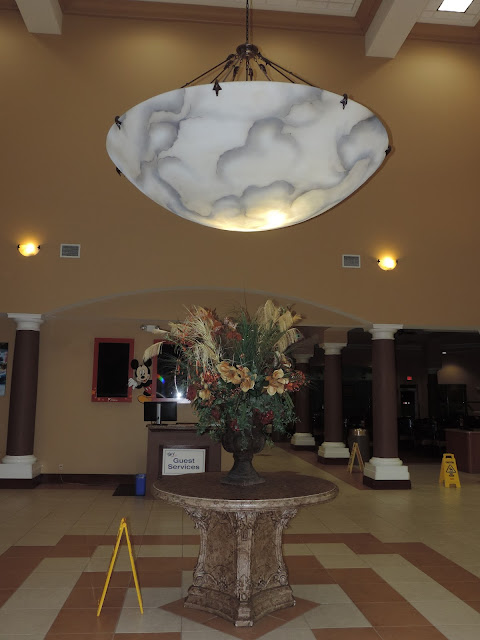 We do not live super close to Orlando. In fact, it is a few hours away, so when we did finally pull in, the hotel was in 'relax' mode. It was still grand though, even with the 'careful, it's wet' fold outs strategically placed around the entryway. 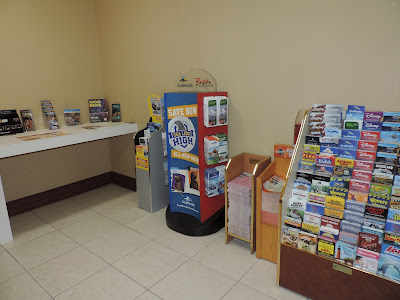 Then to make matters worse (for the kids), I started poking around to see what they offered. The kids wanted to go right to the room. They both love exploring hotel rooms. It's like being on an adventure! I get it, but I knew the room would keep.

The first area I discovered was the information room. Oh how I loved this room! 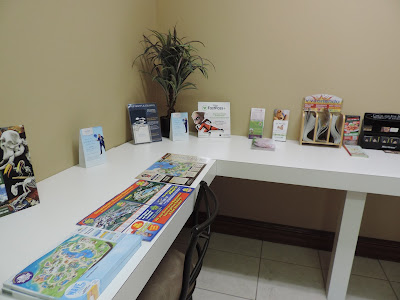 Not your average brochure room, this one had a table that wrapped around the walls, and chairs so you could sit down and do some planning. If the kids weren't already in a hurry, I could have spent some time in that room, let me tell you! 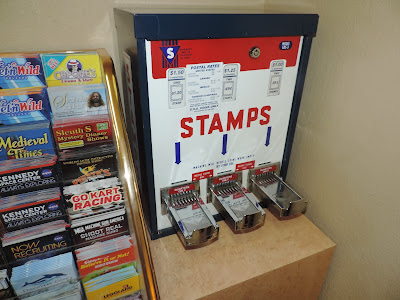 There was a stamp machine in there too, which I thought was a nice touch. It's always more fun to send postcards from the destination and a stamp machine meant you didn't have to go to the post office to do so. 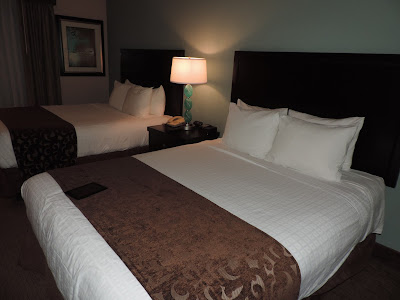 I wanted to look around more, but the kids assured me I could do so later. ;)  I obliged and took them to explore the rooms. Inside we found a bedroom with two queen-sized beds. Very comfortable beds, I might add too.

The next morning we decided to 'close Disney down!"

Close it down we did, but oh our aching feet!! These beds were amazing for getting some much needed rest, for our bodies and our tootsies!! 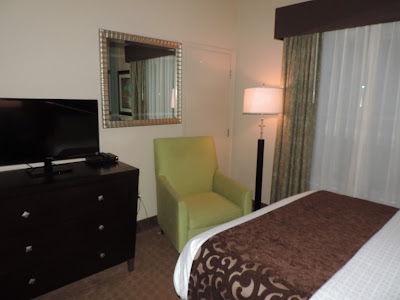 There was a chair at the end of one bed, and a flat screen TV on the bureau. We didn't use this, but it was nice to have the option if we had wanted it. There was a closet in the room too, with an iron and an ironing board. 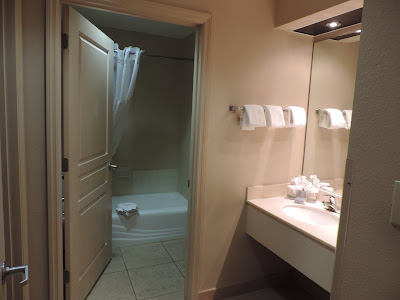 The bathroom had two rooms with closing doors. The dressing area and the bathroom itself. This was nice because it meant showers could be taken while my teen did her make-up. Otherwise little man and I might have been waiting forever and day to get our respective turns in that bathroom...and that would not have been cool at all, we had Disneying to do!! :) 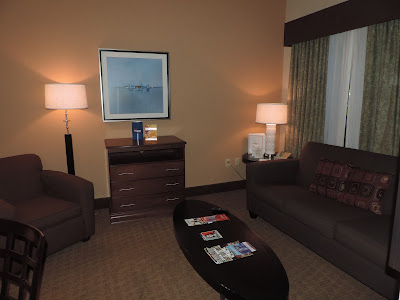 The living room area of the suite, and know that ALL of the rooms at the Hawthorn are suites, had seating , a coffee table (with more information on display about the area) and another flat screen TV. 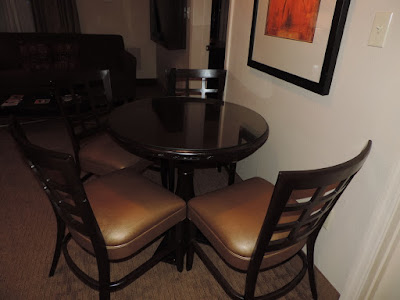 The dining area was small, but perfect for our needs since it was just the three of us for this trip.

The menu for room service was extensive and chock full of delicious options. There were kids meals available too. Had we been staying longer than the weekend, we might have used the room service. We weren't in the room much though, since we did a double day at area amusement parks.

The room had a countertop stove, microwave, full refrigerator and freezer, and all of the items you might need to cook. If you look carefully, you can see the coffee pot in the right-hand corner there too. 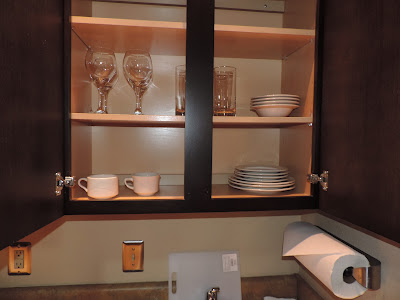 There were dishes, glasses, paper towels, and more. There was also a dishwasher to use if we needed it. We did use the kitchen a couple of times. I rinsed our dishes and put them in the sink to load the dishwasher later. When we came back from the park the first full day we were there, housekeeping had done the dishes for us. Woohoo, delightful. I could get used to someone else doing our dishes. ;) 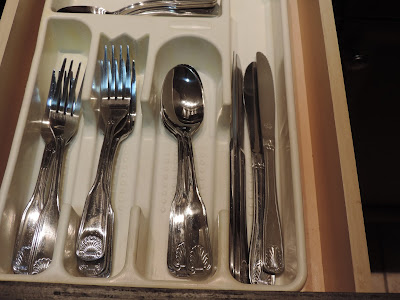 There was plenty of silverware for serving and eating. 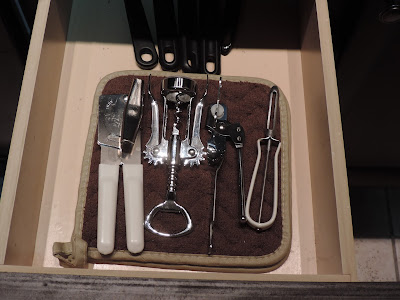 There were specialty items and gadgets too. Really everything you could need to make a meal in the kitchen.

While we're discussing food, let me tell you there was a complimentary huge, hot breakfast each morning. The items were different each day too. I like that they switched it up. Above you see but a small sampling of all that was offered. I'm partial to pancakes and my daughter likes sausage, so we were both delighted. There were also eggs, potatoes, cereal, bagels, fresh fruit and more...lots more!

The hot coffee was replenished often, and when you're running on restful (but not a lot of) sleep, this hot beverage is a necessity, not a bonus. ;)

There were so many choices on each and every table (there were several tables), including this sweet set-up for my oatmeal. We were all happy to have the hot breakfast. It was a leisurely way to start our soon to be very busy day.

The lobby area was full of seating options. which was nice if you finished your breakfast first in the adjoining, open room.


Hawthorn Suites took so many things into consideration for their guests. This little area to buy items was a handy touch. There were cosmetic, medical and food items. There were also cold drinks!

the kids had a game room,

and there was even a pay phone!! I laughed but let me tell you, it was hard to get a picture of it because it was always in use.  Funny, right?!!


The rooms had free WiFi, but if you needed it there was a rather large business area that had  a lot of seating, a few computers and a printer. It was very much like an office setting, and a great place to get necessary work done while the rest of the family played, if that was something that had to be done (thankfully that was not the case for me this trip, but...been there, done that).


Like I noted before, there was no shortage of seating. This little area here had a group of people playing a card game at one point, and I thought that was pretty cozy. They were laughing it up and having a grand old time too.


The pool area was full of thoughtful design and amenities too!! In addition to the awesome (heated) swimming pool itself, there was also a jacuzzi, ample seating...

a chair that lowered into the pool, a shaded (roofed) area, a gazebo,


Barbeque grills were placed in the shade,


and there was even a basketball court for the kids (or adults!) to play. I don't think I've ever seen a basketball hoop at a hotel. Such a grand idea!


If you wanted seating in the sun, or the shade, everywhere you looked they had chaise lounges and umbrella tables and chairs.

A conference room was just steps from the pool, and it had a high person capacity to be sure. Hawthorn Suites by Wyndham was a great option for our weekend family vacation. It would also be ideal for an extended vacation, and/or for hosting a business conference (def. a great spot for a blog conference or event! Just saying. :) ).

This stand-up poster was right next to the elevator. DO YOU NOTICE TWO UNUSUAL things about it? Hint, one is 17 and on the left, the other is 8 and on the right. ;) Silly kiddos. :)

And, speaking of posters, this large one was in the foyer. It was a good reminder that you could buy your Disney tickets on-site if you wanted to do so. There was also a complimentary shuttle you could schedule, if you didn't want to drive. Like I said... considerations galore.

In fact, if you wanted to, you could just park your car when you got there, and not need it again until it was time to leave!

There were even things there that we didn't see or get to take advantage of, like the recreational area with a pool table, air hockey and foosball. If you go there on week days (we went for the weekend), you'll also find Social Hour with (2) complimentary adult drinks, and unlimited soft drinks. On Wednesdays, a light meal is always offered free... Manager's Reception..and you can get a complimentary hot dog or hamburger with an ice cold drink. Cool, right?! :)


We had a great stay at Hawthorn Suites by Wyndham in Orlando.

If you are interested in learning more, the address is:
Hawthorn Suites by Wyndham Orlando/Lake Buena Vista
8303 Palm Parkway
Orlando, FL 32836

If you're headed to Orlando, the Hawhtorn Suites by Wyndham is close to everything!! Highly recommended: great for singles, couples, families and  awesome for business too! You can learn more by visiting the website. You can also follow along on Facebook. Twitter, and/or G+.
on May 25, 2016