Disclosure: This is a post sponsored by Chiquita and Mom It Forward. All opinions stated are genuine and my own. This post will have information on a contest that has a grand prize trip to Disney World (with a link to enter) and one for a Chiquita Prize Pack giveaway (ARV $50) that you can enter for at the bottom of this post! 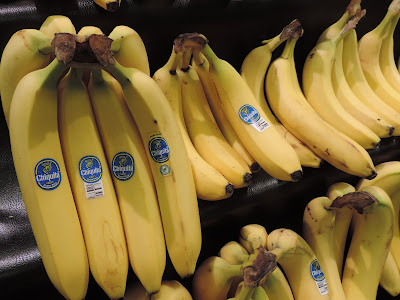 You probably already know that Chiquita bananas are scrumdiliumptious. They're always an instant favorite to give the kids for an afterschool snack, to pack in their lunches, or to have with my breakfast! We also love them for smoothies, and as a quick snack to grab on the go. I always keep a bunch on the counter along with the other fresh fruit in the house, because I know if the fruit is there, that's what they'll reach for first. 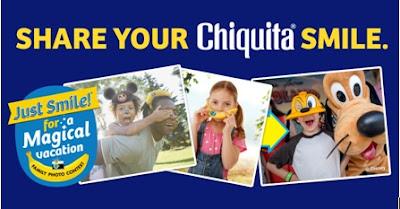 Chiquita has now made me even happier because they are hosting a most excellent giveaway. To enter simply visit the website: ShareYourChiquitaSmile.com, upload your picture showing your best Chiquita smile, select your favorite Disney theme, and get your friends and family to start voting. The grand prize is a 5-day, 4-night vacation trip to Disney World!! The airfare and resort accommodations are included. Now that's a good reason to celebrate, and a great way to awaken summer!  The giveaway runs now through June 19, 2016. The voting period extends to June 26th.

Here is the picture I entered. Once you enter your photo, a note will pop up verifying receipt and letting you know that you will be sent a voting link once it is approved. When you get the link in your e-mail, start contacting friends and family to solicit votes. Easy as that... and there are weekly prizes too. Each week (1) person will get a swag bag.

As for Disney, everyone seems to have their own favorite of the four parks. I thought Magic Kingdom was mine, but on Mother's Day weekend, I took my two youngest children to both Magic and Animal Kingdom. I think I have a new favorite park. Oh my goodness we had such a fantastic time roaming around, seeing the big tree (did you know it lights up after dark???), watching the street dancers and musicians, and visiting the animals. One of our favorite things to do was the safari ride. The Kilimanjaro Safari Expedition is roughly 110 acres (that's over 4 1/2 million feet)! A driver loads a nice-sized group of people on a safari vehicle that is open on both sides, and then he takes you around to see so many different kinds of animals. Some you know, some you may have never of until then! I'm sure everyone who saw the Wildebeest thought of the Lion King. I know we did. :)

Disney World's Animal Kingdom also has an awesome addition that wasn't there when we went over a decade ago, Expedition Everest. It's a beautiful roller coaster, and it has a big surprise...it stops when you're inside the tunnel, shows you a little movie of the Yeti tearing up the track, and then it goes backwards!! None of us knew when we went on that it was going to do any of that, so yeah...we were surprised. My little guy was like, 'oh what?!?!' but he loved it so much he went back on with his sister (I stayed off that time, to get their picture on the ride). Such a fun ride, such a fun day!

So...now we have a new 'equally favorite' Disney theme park...which means we loved Animal Kingdom every bit as much as we love Magic Kingdom. Now to tackle Epcot and Hollywood Studios (we haven't been to either for years!).

Disney’s Hollywood Studios®:
●     DYK: The Twilight Zone Tower of Terror™ attraction located at Disney's Hollywood Studios® is amongst the two tallest attractions at the Walt Disney World® Resort! Found out its height and speed:  Disney Fun Facts
●     DYK: Did you know that the ambitious plans to bring Star Wars to life in Disneyland® Resort and Walt Disney World® Resort include creating Disney’s largest single-themed land expansions ever at 14-acres each! Find out what this new land is for:  Disney Fun Facts

Epcot®:
●     DYK: There are 5.7 million gallons of water in the Caribbean Coral Reef aquarium in Epcot®!  Read more:  Disney Fun Facts
●     DYK: Did you know that Epcot® was the second theme park to be built in the Walt Disney World® Resort? Find out more: Disney Fun Facts

Disney Springs™ Area:
●     DYK: Located in The Landing section of Disney Springs™ area the theming and backstory of “The Hangar” was inspired by the fictional character Jock Lindsey, a seaplane pilot in the film “Raiders of the Lost Ark.” Read more: Disney Fun Facts
●     DYK: The world’s largest Disney merchandise store just got bigger—and better—than ever! Found out more: Disney Fun Facts

Magic Kingdom® Park at Walt Disney World® Resort:
●     DYK: Seven Dwarfs Mine Train is not like regular roller coasters, each mine car in this coaster is mounted in a cradle-like pivot, which allows it to swing side to side independently of the others. Find out more at Disney Fun Facts.
●     DYK:  It’s a Small World® attraction appears in all of the Disney theme parks worldwide, including Paris, Tokyo, and Hong Kong. Read more about it at Disney Fun Facts.
●     DYK: Dumbo the Flying Elephant® attraction has been a Magic Kingdom® Park favorite since the park first opened in 1971 in California. Walt Disney World® Resort in Florida has now doubled the fun! Find out how at: Disney Fun Facts 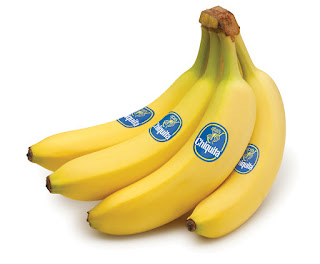 You know I love giveaways too, so in addition to all of this, you can enter here to win a Chiquita Prize Pack. It comprised of an assortment of Chiquita branded items, and has a $50 value! US/CAN (excluding Quebec) entrants only.