Disclosure: I received sample products to help facilitate the review. All opinions stated are genuine and my own.


Ask a child to write out a wish list of items they would like to have, and more than likely a Hasbro toy is going to make the list. Hasbro is a name that has been around for as long as I can remember, and it's one that is trusted by parents fully, myself included. I've been buying their games and toys for as long as I've had kids. My oldest ('kid') is 27, so that's a good long time. :)

There are many, many reasons to love Habro, I'm showing you three of them right here and now. :)

Most every little boy loves to play the superhero and my son is no exception. Counting Spider-Man among his faves, we recently had a blast, a sling blast that is, taking his new toy out in the backyard to play.

The Marvel Ultimate Spider-Man Web Warrior Slingers Blaster is a glove that you slip on and secure around your wrist with Velcro. A plastic spider-shaped box rests atop the glove, and not only does it shoot out the soft rubber slings you see in my son's other hand, but it also has some pretty cool sound effects.


The instructions show how easy it was to put together the toy. The plastic box is already attached for you, and you merely need to learn how to insert and shoot the slings. Easy peasy. Designed for ages 5 and up, this is a great surprise gift to get for the little boy in your life!


The set comes with one target villain that you can put anywhere and use for web-slinging target practice. We tried that a few times, but my son decided it would be more fun to chase me around and shoot me with them. It's hard to take a superhero seriously when he's running around laughing while he's trying to shoot you. Even funnier when he's trying to make a serious face but keeps breaking it with a smile.

Baby Alive is such a popular doll right now, and it has been for a long time! My daughter is a frog-chasing, tree climbing, dirt digging run-with-the-boys kind of gal, or at least she was when she was younger (and she still sometimes is!) but the one doll she did ask Santa for a few years ago was a Baby Alive. Never mind that her doll shared toy playpen space with baby frogs she found in the yard, she still loved her little doll as much as any little girl does, and it was nice to see her enjoying a baby doll for a change. :)

Now I have a baby granddaughter who is all girly and lovey dovey to her doll babies, and for her birthday coming up here any day, she's going to get the Baby Alive Sips n Cuddles doll you see above. Decorate the included sippy cup with the stickers that are provided and it will instantly match the diaper and dress! This Baby Alive is called Sips 'n Cuddles because after she drinks, 'mama' can change her diaper (the doll really wets) and give her some sweet cuddles.

Recommended for ages 3 and up.


Reason #3 to love Hasbro is their awesome game selection. Right now we're loving Crocodile Dentist. This game literally is played so fast, but it's so fun! That makes it  perfect for those times when you want to spend some quality time with the kids but you're short on time (like right before bed when they want to do 'one more thing' before they brush their teeth to go to sleep). Yesterday for instance, we played in that time crunch just before dinner was ready, and the game went so fast we must have played 10 times in 15 minutes.

Just because it's fast to play doesn't mean it's short on fun! See that face my son's making in the picture above? He doesn't want the crocodile to chomp when he pushes on a tooth! If you find the sore tooth, those jaws come down fast and they make you jump! Of course, that's the best part of the game. :) 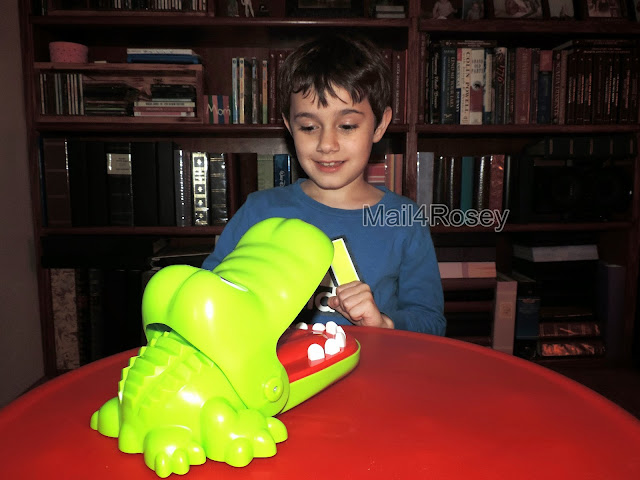 Made of sturdy plastic, this game has no removable parts, no batteries, and he's super easy to store. This is a fantabulous addition to our game collection, and so much fun we kept him on the main floor of the house instead of storing him in the Game Room with our other family fun things.

The Crocodile Dentist is recommended for children ages 4+.

So that's my three super solid, amazing reasons to love Hasbro. There are more... lots more!

You can learn more about Hasbro, and see their awesome toy and game selections by visiting their website or online store. And or course too, you can find these and other Habro items in stores everywhere!