Disclosure: My family and I received a complimentary stay as part of a blogger promotion. All opinions stated, however, are genuine and completely my own.


Have you heard of Key Lime Cove in Gurnee, Illinois? It is conveniently located right next to the Six Flags Amusement Park and can definitely enhance your vacation or be a vacation all on its own. 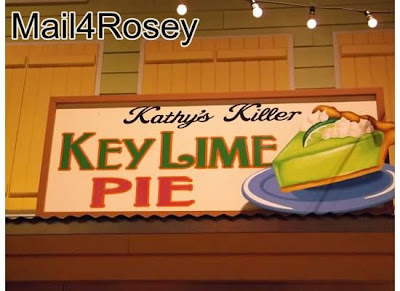 A few days ago, we packed the kids up and drove over, excited to give the resort a visit. We didn't tell the youngest where we were going, we only told him that it was a surprise. The oldest knew, because, well she has to know these things to pack accordingly. ;)  When we pulled up he still didn't realize what a treat he was in for, but once we walked in the front doors, he knew.

Immediately when you step in you are greeted with a replica of a tropical paradise. There is seating everywhere, including big cozy couches next to the windows that overlook the huge indoor water park; a waterfall, several stores including one that carries anything you could need during your stay (& it's open 24-hours).

Our son was delighted to see the indoor water park from the wall-sized windows on the ground level. The big surprise came, however, when we went down a short flight of stairs to the game room.


The room we had was a very spacious, one-bedroom suite. It had two queen-sized beds, a couch, chair, dining room set, balcony with seating for two, and a little kitchen area (the room had a microwave and refrigerator as well). There was a safe in the drawer, a spacious area outside of the bathroom, two vanities, and pocket doors to separate the dining and living room areas from the bedroom and bathroom (both areas of which had a flat screen TV).

Check-in was at 4pm, but you could come early and get a wrist-band to play in the water park. Check-out was at 11am, but again, you were welcome to spend the whole entire day in the rest of the resort after you'd left your room.

The wrist-bands for the water park were also the keyless entries for your room (this was an awesome feature because who wants to carry their card key to the pool?). You could also use your wristband to make purchases anywhere in the hotel, including for the arcades, shopping, dining, and the lockers down in the water area.


The lifeguards in the pool were very attentive. The towel attendants and food servers were very helpful and courteous. Even the locker rooms were impressive with a huge changing area, multiple showers (body wash dispensers were on the walls), restrooms, and a machine to extract the water from your wet suits. 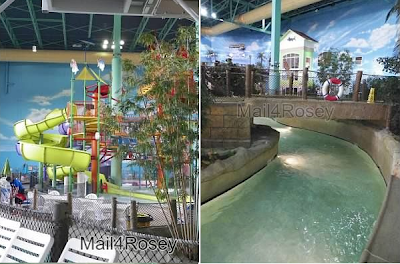 There were six restaurants in the resort. We had pizza for lunch which was fine (the kids loved it), and a really delicious dinner at The Crazy Toucan Margarita Grille.


There was a shuttle that took you back and forth to Six Flags Amusement Park whenever you wanted to go (tickets purchased separately). That was awesome because it meant you didn't have to pay the $22 parking fee at the park. The driver was really nice, and at the waiting stop is where the Batmobile I posted yesterday was located.  If you wanted a boxed lunch (sub, chips, cookie, drink), you could order it at Key Lime Cove and they would deliver it to the amusement park...right to you, at a designated time. We didn't take advantage of that, but for under $9.00, I thought that was such a great idea.


There were many other perks, services, and fun things to do in the resort, way too many to list!

There were two spas, one award-winning spa for adults, and one separate spa for children (awesome!!). 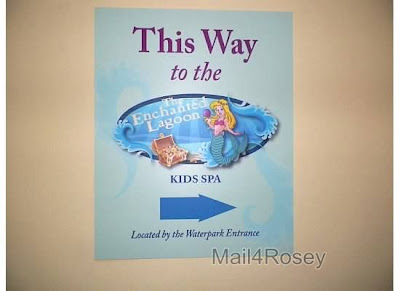 There was also a very large room split into two big sections for crafts. Children could do one free craft a day. There were also many items available for purchase, and places to sit to get a great view of the outside. Again, everything had a tropical resort feel.


Every single thing was above and beyond nice, but he most amazing thing about the resort to me, was all the thoughtfulness that was put into everything. There were decorations all over the place that were just 'resort-y feeling' like the colored hallway walls,


The little man perched on the window sill up high,

And old-fashioned gas pumps were on display. 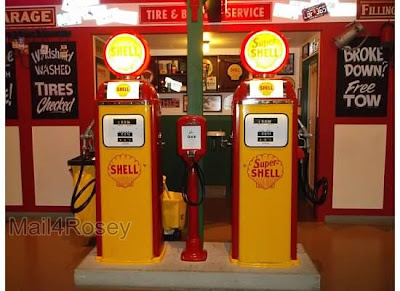 Even the BATHROOMS were decorated in tropical grandiose fashion...not that I would take pictures in a bathrooms, who would do such a thing?!?!? ;)

The sign they had up that Key Lime Cove was a great place to relax was spot-on. We couldn't have had a more wonderful time. 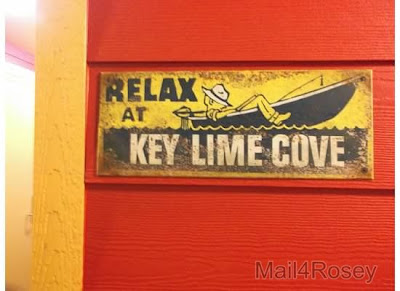 Keylime Cove Resorts received the distinguished honor of being named the #1 Family Hotel in the US and #2 worldwide by TripAdvisor in 2012.

If you are going to Six Flags in Gurnee, IL (just outside of Chicago), this is hands-down the most convenient, best place to stay (there are package deals available for discounted amusement park tickets). If you're just looking for a place to relax, have fun, chill out, etc., this is also a great choice. It goes without saying that the kids loved it, but even better, the adults did too (it's win-win when everyone's happy).