Lume Footwear is a brand sold exclusively online, which makes good sense considering a very large number of people order online with regular consistency. They do so in order to pass the savings directly on to the consumer, with a living motto that premium gear shouldn't have a premium price tag.

They have come up with a high quality rain/snow boot for children (featured here) and women (which you can find on their website).  Kids like them for numerous reasons, and parents do too.

The Kids:
Lume Footwear knows that kids like boots (I'm willing to guess that not many people have a child aged preschool on up who doesn't like to put on a pair of boots).  They also know that if you add a durable and roomy pocket to the outside of each boot, kids are going to be over the moon happy.  My son is a collector by nature, and he likes to store things.  The pocket on the outside of his Lume Jr. Sleeve boots was the perfect place to store his special treasures while he was romping around on our recent vacation to Dublin, Ireland.  One of the days we were there took us to a place where we could press a penny (you've seen them in most places touristy, I'm sure, well my son loves to make those) and he slipped it in his boot pocket and carried it around for the rest of the trip.  There were other items that were put in and taken out of those pockets, but the penny had to stay, and he thought that was a really big deal.

Everyone knows when you go to Dublin that there's one thing you can most always expect, and that's rain.  Lume Footwear sent us a pair of their Kids Jr. Sleeve w/pockets boots so we could take them along and put them to the test. The boots were comfortable all day long (we brought shoes along in the stroller that first day, just in case, but they were never needed), and they kept his feet dry and warm.  The boots are designed to keep feet cozy down to minus thirty degrees (Fahrenheit), and though it was nowhere near as cold as that where we were (thank goodness), it was certainly not warm. The boots did their job and kept my son comfy while we were outside, which we were a lot.

You can use the Lume Footwear for rain or snow, and I think that is uniquely awesome.  Another feature I really liked as a parent was that the Kids Jr. Sleeve boots are easy to clean.  Simply wipe w/a slightly damp cloth, and they look good as new.  A final point worth noting is the boots are extremely flexible, not bulky, so they were super easy to pack up and take along with us. 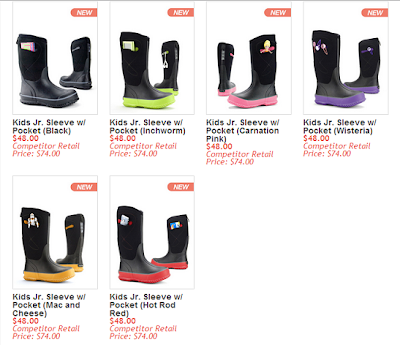 We chose the Hot Rod Red because it goes best with the cool Spiderman look. ;)


I usually give a pros and cons list for items I review, but Lume Footwear for kids gets a 10/10 for quality, style, function, and fun.  They were so nice, I'm actually considering the women's boots for myself (yep, they've got those too).

You can learn more about Lume Footwear by visiting their website:  http://www.lumefootwear.com/

Disclosure:  I received a sample product to help facilitate the review.  No other form of compensation took place and all opinions stated are my own.
on April 07, 2013