Disclosure: This is a sponsored post. I received a free product or a discount code to use for the purchase of one. All opinions stated are genuine and my own. 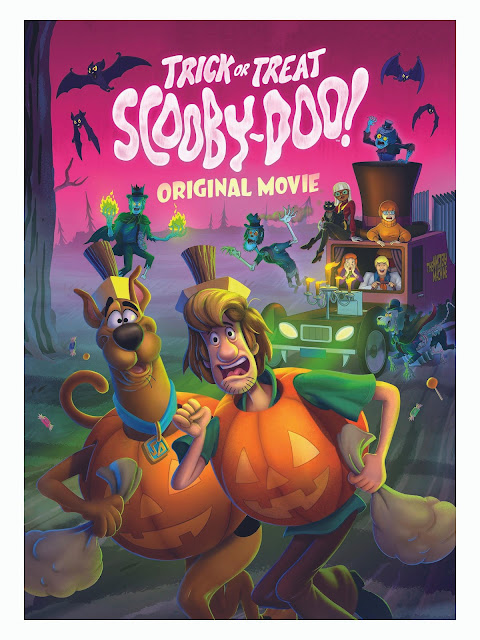 Just in time for Halloween, 'Trick or Treat Scooby!'
When my two oldest were young boys, they would get so excited when Saturday morning would roll around because that was the only time cartoons, with rare exception, would be on the television. They'd hurry up and eat their breakfast, just so they could camp out in front of the TV and watch several animated shows in a row. Most of the cartoons they liked are long gone now, but there are a few that really stood the test of time, and Scooby Doo is one of them. In fact, I remember watching Scooby and the gang when I was a kid, and believe me, that was a long time ago.  Now, I'm happy to say, my granddaughters are watching Shaggy and the gang too!!

Everyone’s favorite mystery-solving gang is back! Grab your Scooby Snacks and get ready to go undercover as Warner Bros. Home Entertainment releases Trick or Treat Scooby-Doo! on Digital October 4th and DVD on October 18th. In addition to the 72-minute all-new original animated film, the DVD release also includes three bonus classic Scooby-Doo! episodes. Trick or Treat Scooby-Doo! will be available to own on Digital for $14.99 SRP (US and Canada) and on DVD for $19.98 SRP ($24.98 in Canada).

Mystery Inc. has cracked the case to top all cases! They’ve tracked down Coco Diablo, the head of the notorious costume crime syndicate that colludes The Black Knight, Space Kook and the Ghost Diver. With Coco and her kitty in prison, Mystery Inc. thinks that they can finally enjoy a break. Wrong! Suddenly, menacing doppelgänger ghosts of the Scooby crew and favorite classic foes show up in Coolsville to threaten Halloween. Now it’s up to the meddling kids – and their unlikely new partner Coco – to unmask the latest scoundrel and save Halloween! For Shaggy and Scooby-Doo, with trick-or-treating on the line – this time it’s personal!

Trick or Treat Scooby-Doo! will also be available on Cartoon Network and HBO Max during this year’s annual Scoobtober celebration.

Trick or Treat Scooby-Doo! will be available to own on Digital on October 4. Digital purchase allows consumers to instantly stream and download to watch anywhere and anytime on their favorite devices. Digital movies and TV shows are available from various digital retailers including Prime Video, Apple TV, Google Play, Vudu and others.

You can digitally stream your copy today (released October 4th).