The Day my Son got to Play on an NBA Court 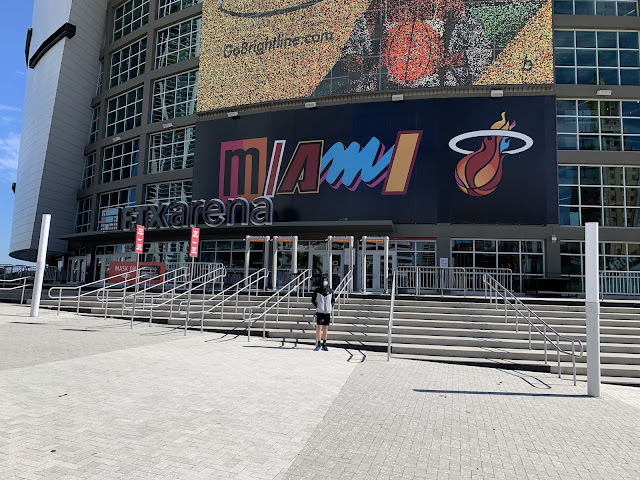 We got to Miami early because I wanted to beat traffic and make allowances for getting lost, which is something I sometimes do. My inner GPS has always been a little broken. Thankfully though, we got there with ample time to spare. This was a big day for the teen, he had been invited to scrimmage on the NBA Miami Heat court. It was a very exciting thing for us, and the anticipation had us amped up for days. 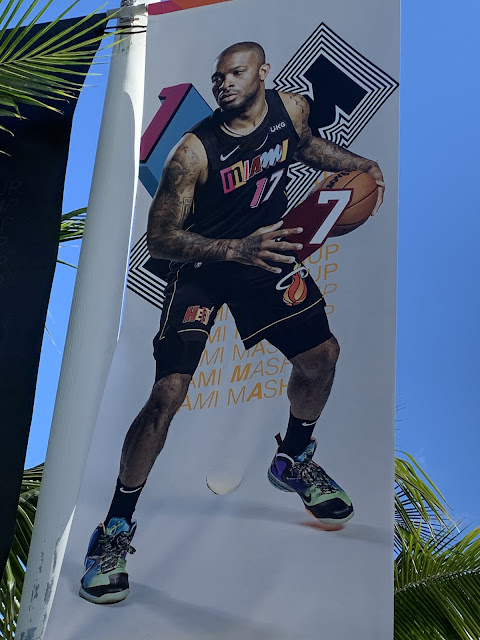 The area around the arena was safe, the weather was pleasant and
we didn't mind waiting around outside. 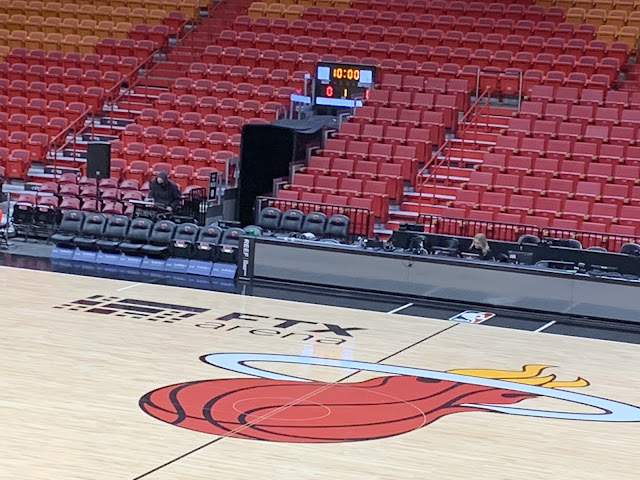 When we did get to go inside, we were a little in awe to have the arena to ourselves
(just the basketball players, coaches, parents, etc.). It did live up to our every expectation. 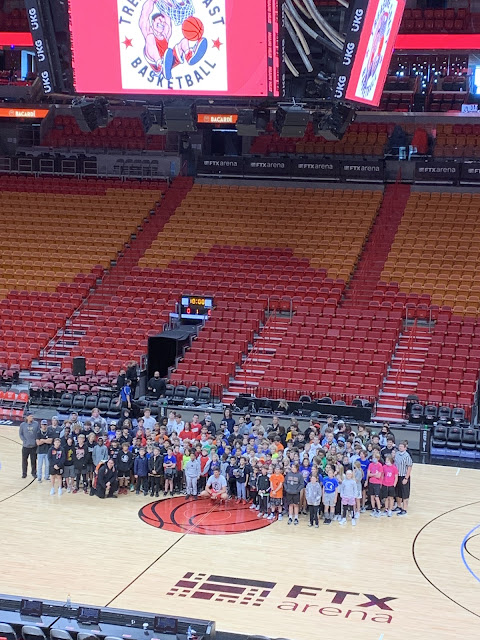 The first thing to be done before the scrimmages began was to gather everyone together for a photo. Masks were required at all times, unless on the court. Parents were not allowed on the court, or in the expensive courtside seats. There was going to be a game later that night (which we were also invited to), and I'm sure they didn't want to sanitize the seats again with so little time between our event and the actual game.  We later found out that those seats were the only ones permitted to have occupants with no face masks during the official game (a note in the brochure mentioned those people had to have proof of vaccination). So many things have changed in such a short time. So grateful though, that we were able to gather for this event. Just a year ago, it wouldn't have happened, and I was worried up until the day we got there, that they might cancel it. 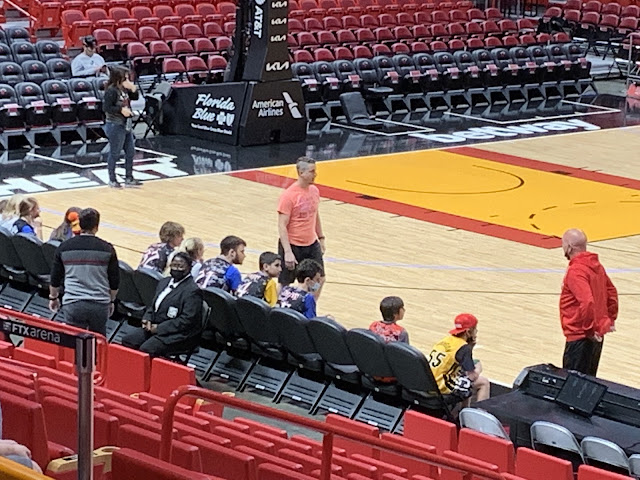 The kids waited for their age group to be called and when it was they made their way to sideline seats. My son was a little nervous there, but nervous in a good way. 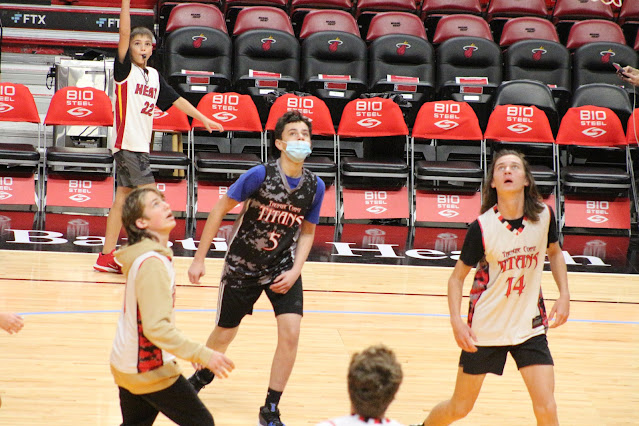 Once the game started, he was all in. If you look in the background you can see that they let the younger kids referee (there were adult referees running the court as well). At one time, there were ten child referees on the court, and you couldn't help but smile a little. The kids were having a blast. They also had a child commentating and they rotated it, giving everyone a chance to do it who wanted one. Again, there was an adult at the commentating table as well, to help out and supervise as needed. 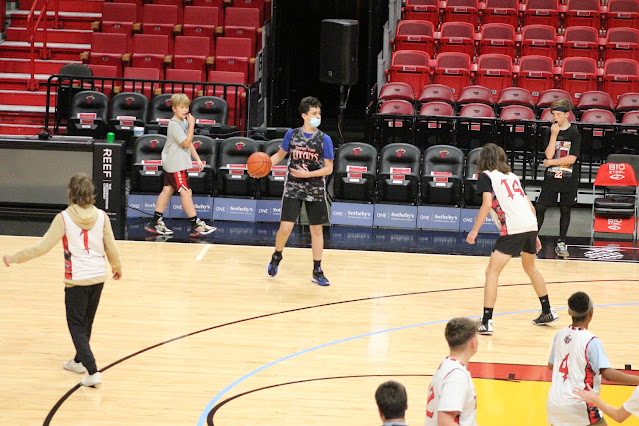 It will come as no surprise to anyone who knows me, but I had the big camera around my neck and I was taking pictures, and I had my son's phone running a video the whole time, so he could see himself on the court. I looked around and Paparazzi Parents were everywhere doing the same. Sigh. Yep, those are my people. 💓😆 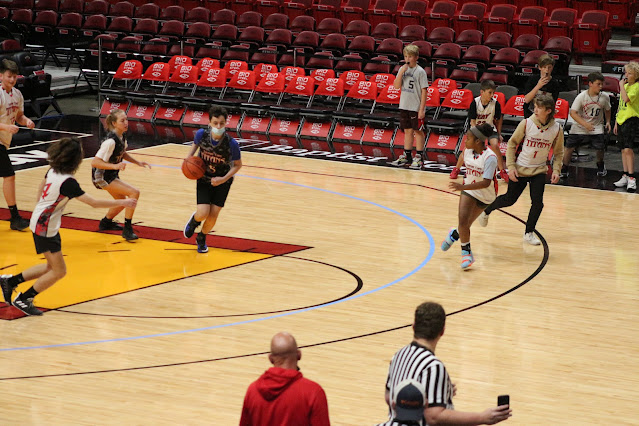 The age groups were co-ed and the girls were every bit as active as the boys. You can see the adult referees in this picture. They were there to ensure the kids officiated correctly. 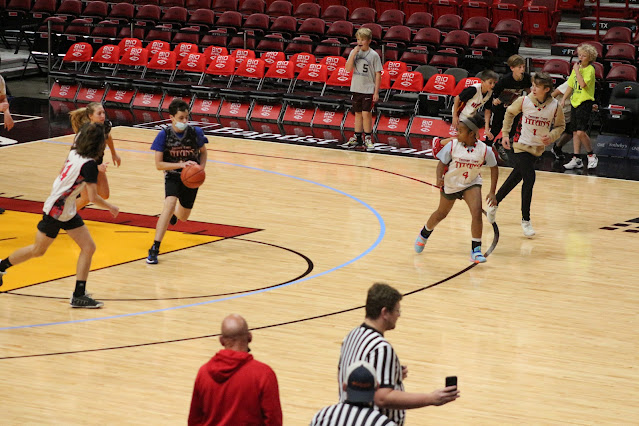 You can also see that the kid refs on the far side all had their own whistles. The arena was big enough that it didn't bother anyone, which was a welcome thing because they were all very ready to sound off at any given moment. 🤣 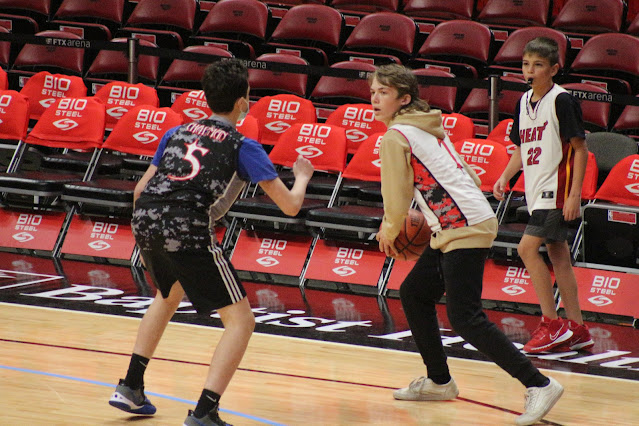 Of course, when your kid's on the NBA court playing, you don't really care about noise. You're too amped up and excited because you know your child is out there loving life. 🏀 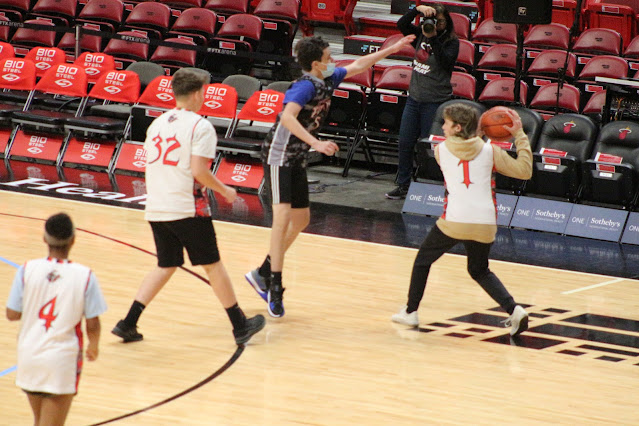 The only thing that could have made the day better is if they'd have gotten to play a whole game. We understood of course, that it had to be a partial game because so many people had to get a turn. 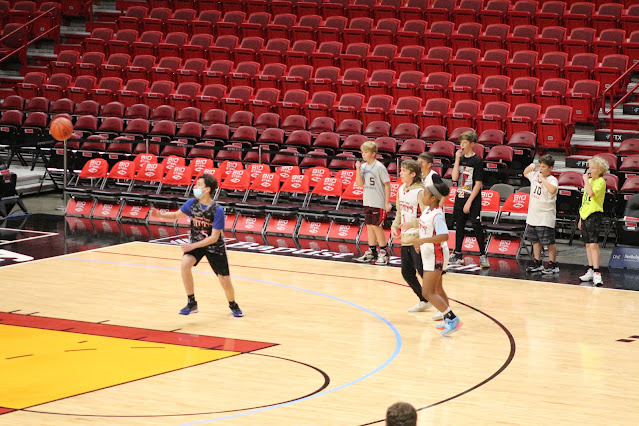 This event lived up to its hype. This was a once in a lifetime day for a teen and everyone there had a simply fabulous time. My son and myself included. 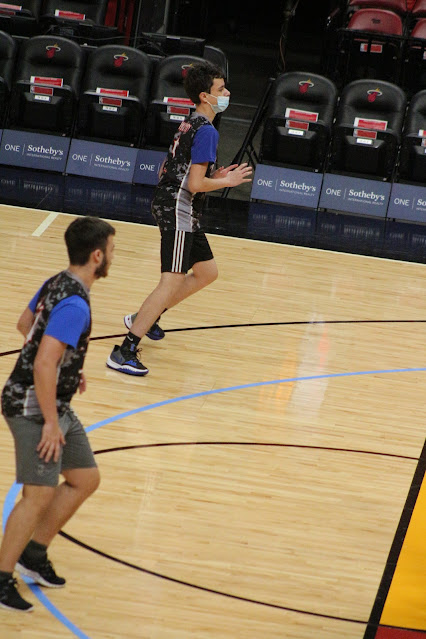 I am happy to say that my son is not a ball hog by any means. In fact, I'm very proud of him that he is such a fair player and in most instances, he will pass to someone no one else will to ensure everyone has a shot to play and get better, but he does end up with the ball a lot. This day was no exception. He was a go-getter per his usual and did a great job running plays and shooting baskets. I asked him how it felt to be on the court and he said so good his knees were shaking. I'd call that a win for the day. :) 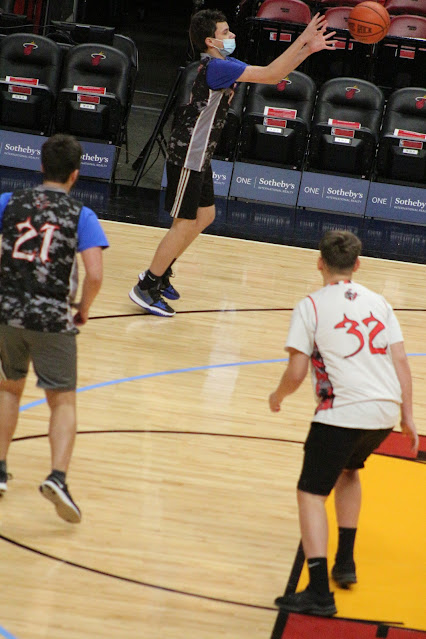 I enjoy watching him play. The older he gets the more invested we get in the sport. It's getting a little pricey at times but that's okay. It's worth every penny and the benefits far outweigh the costs. 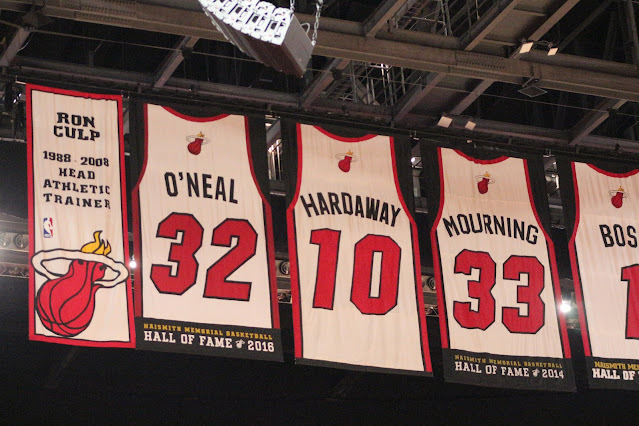 The FTX Arena, where the Heat play in Miami is nice. Like any stadium, they have memorabilia around that jogs your memory. Here you see representative jerseys of players who used to be on the team. Michael Jordan's jersey was on an opposite wall of the auditorium all by itself, and that was confusing to me. I looked it up later and saw that Miami was just honoring him as a player who made such a great contribution to the game of basketball (he never played for the Heat), that they wanted to retire his jersey number (23) to honor him forever more. 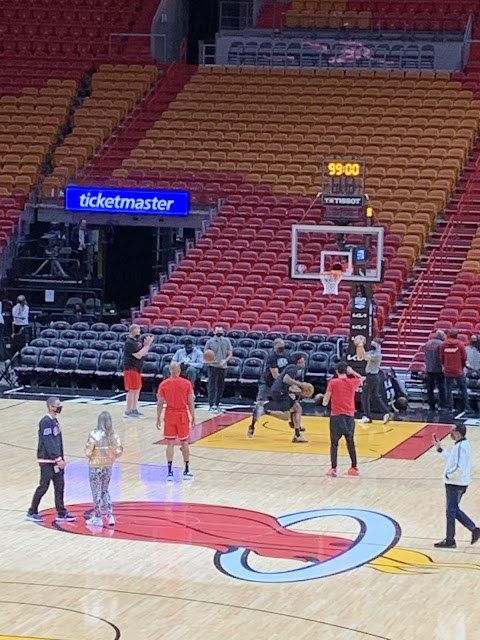 Included with our invitation was a chance to watch the Miami Heat and Toronto Raptors warm up later in the evening before the NBA game began. We had GREAT seats for this, and we were all settled in and happy with our good fortune. Tyler Herro is one of the Heat players and he must have shot 20 buckets in a row during this time. He was crazy good and we were looking forward to seeing him on the court. Let's just say the warmup that evening was way better than his official time on the court. 😉 Jimmy Butler ended up being our MVP of the night, earning a total of 10 assists and 37 points of his own, but I'll talk about the game in a minute. Once warm up time was over (for us to watch...they still played on but we had to leave so those holding tickets could take their seats), we were kicked out of our seats and told to go to our game day seats. No problem. We walked around the stadium for a bit, exploring what they had to see. 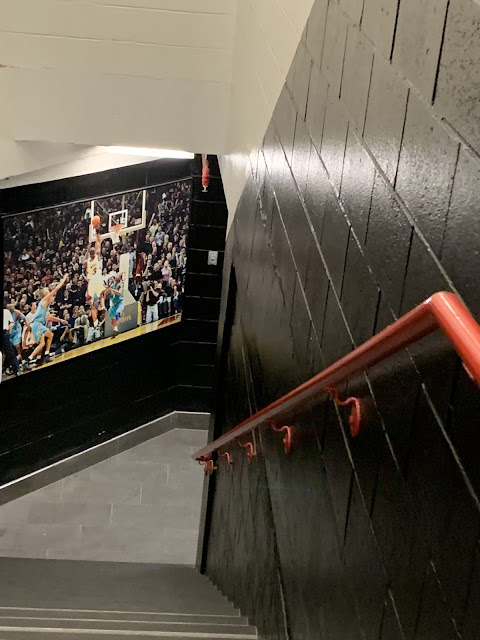 We had plenty of time until the game started so we wandered up and down,
all around and even got something to eat. 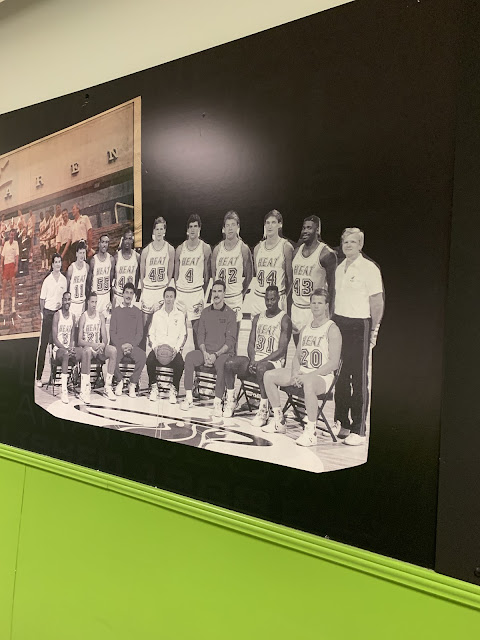 To be honest though, I was getting antsy and wanted to see the actual game.
It wasn't quite time yet, but we headed on up to our seats. 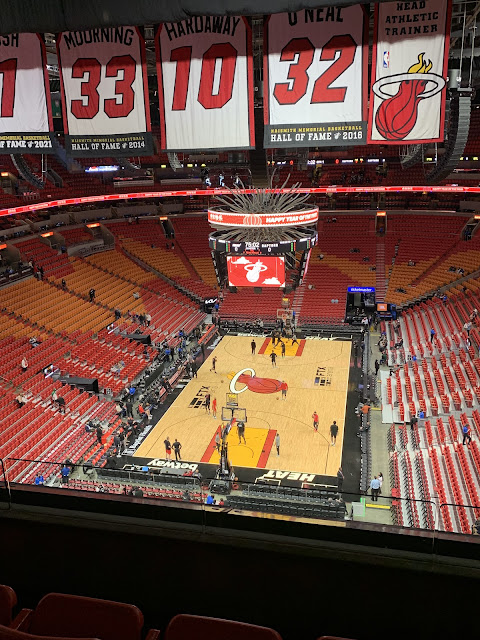 And when I say 'up' to our seats, I mean way up. What I hadn't noticed was that the seats they assigned all of us basketball kid families was waaaaayyyyy up in the stadium. We went up so many floors on the escalator and then we had to walk to the top. Yes, we were up so high, we ran out of escalator, lol. 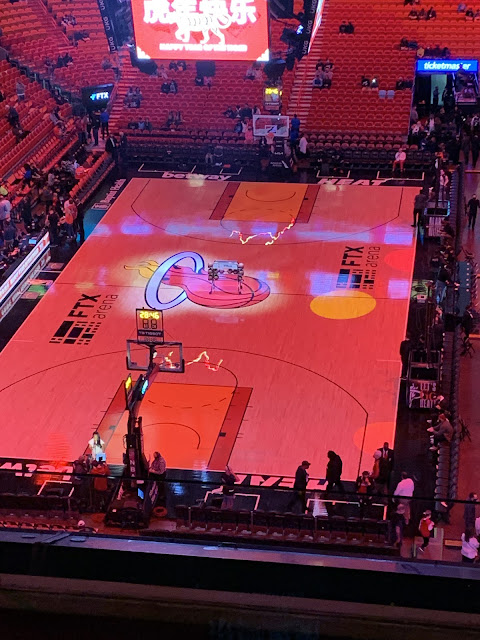 Not to scoff at the privilege of being there, but we'd have never purchased these seats on our own. We were up so high that it felt dangerous. Kids were climbing over seats to get to parents and I was having a panic attack hoping they wouldn't stumble and fall. No one looked worried. Maybe I was the only one? 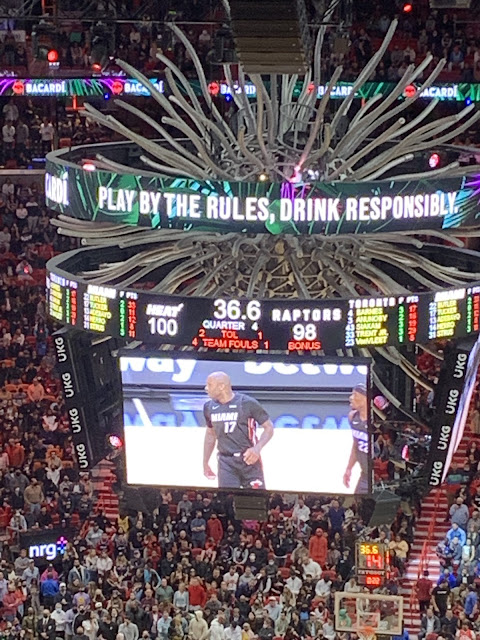 Fortunately, the game was so good we soon forgot about our safety risk seats. It ended up going into overtime not one, not two, but three times. It was such an exciting last quarter.  Unfortunately, The Heat lost to Canada's Raptors. I'm sure people at home were screaming at their TVs. We practically lost our voices there in person.
Our team lost, but we still left happy. How could you not be happy when you had a day that entailed your son getting to play on an NBA court, then you got to take in the warm-up and watch the official players running the court where your child had just been. It was magical. 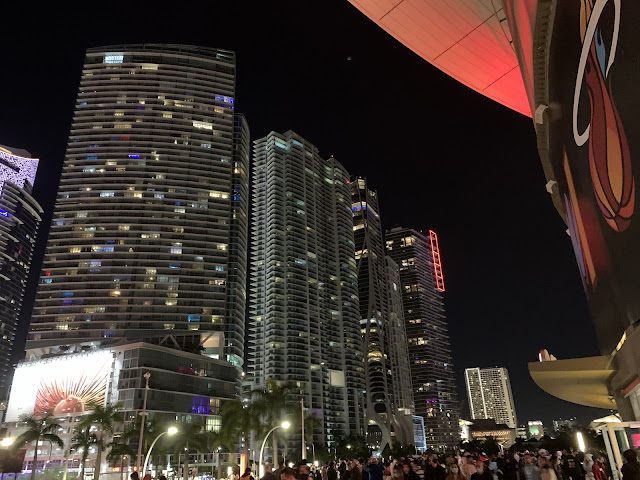 We walked down the flight of stairs and waited for the forty-billion-eleven people taking the escalator to get down the ninety-million now-not-moving stairs (the escalator was turned off) and then we stepped outside to the beauty of Miami at night. It was a day (and night) to remember.
on February 11, 2022