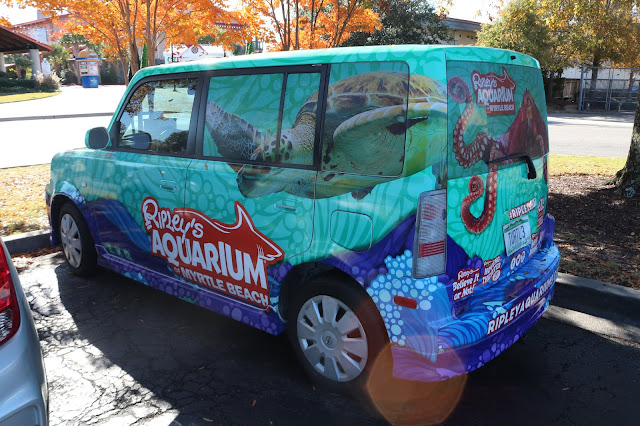 We opted to go on vacation this year during Thanksgiving. My grown kids all have families of their own, and it's still my most favorite thing for us all to be together, but there are now spouses and significant others to consider, and they have things they want to do with their families too...so, off we went. I wasn't sure how the weather would be in Myrtle Beach, South Carolina (having only been there once in the summer) in late November, but it was actually very pleasant. Sweatshirt/light jacket weather, in fact. That meant we were free to get out and roam a bit. Our hotel, The Caravelle, was right on the beach, so of course we spent some time walking the sand. We also ventured off to explore a few times, and one place we ended up was Ripley's Aquarium of Myrtle Beach. 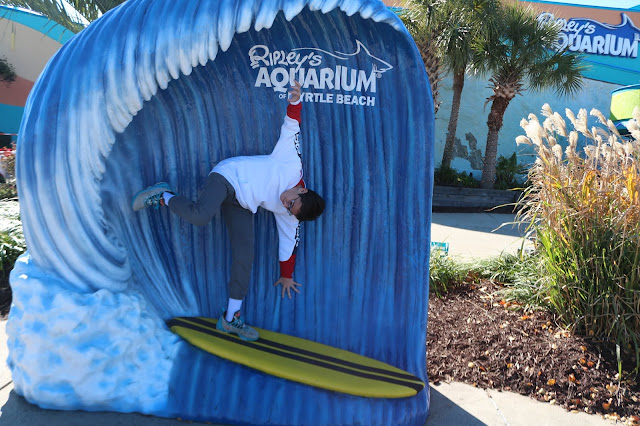 I wasn't sure what to expect, since Ripley's is known for oddities and extremes (which the kids really enjoy seeing), but it was really just a traditional aquarium, jam-packed full of awesome things to see and do. 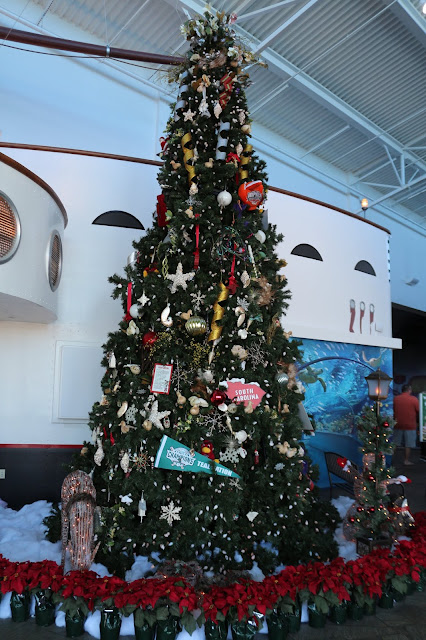 Because it was close to the holiday season, everything was decorated nice and festive. In fact, the Festival of Trees was up and running, where you could walk around and find trees from the various states. Each tree had items on it that represented the state. South Carolina, of course, was right at the front door. :) This is up and running through the end of December if you'd like to stroll through and see the trees and decorations. With the kids out of school, it's a great place to go and spend some quality time with the family. 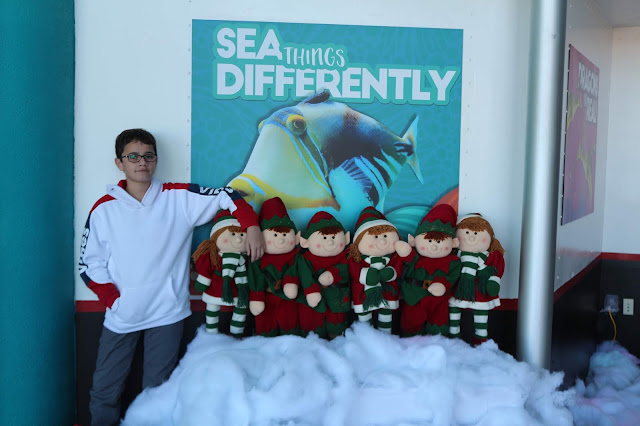 These little stuffed elves made my son instantly perk up. Elves are his fave; although we've gone from mom hiding the plush elf in our house, to my son hiding it, and then finally just hanging it upside down from a string of lights just outside of the bathroom in his room. It's really cute dangling there too, and super smart on his part because now he doesn't have to remember to move it each night. At the rate we're going, we'll probably just tuck the elf in nice and toasty warm alongside the other holiday decorations (aka in a holiday storage bucket) until next year, instead of sending him back to the North Pole in his elf bag. Ah, times they are a'changing, but the elf magic is still real (it's just a nostalgia kind of magic now). :) 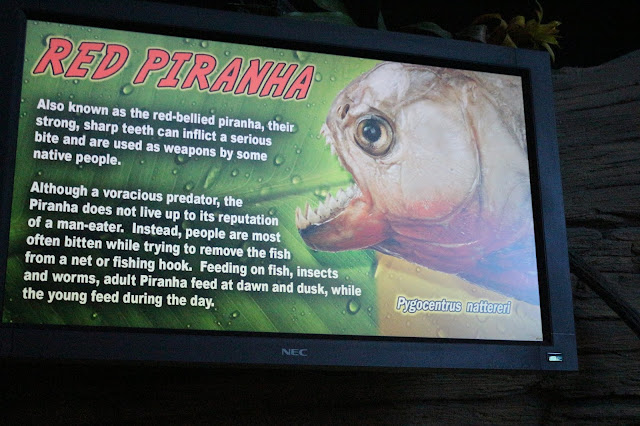 An aquarium full of Red Piranha met us as we walked up the ramp to look around. I suppose I've seen them in real life before, but I can't remember when, so it was cool to see a whole tank of them right in front of me. We stood there for a bit and watched a little video on them, as well as observed how they swam around and interacted with one another. 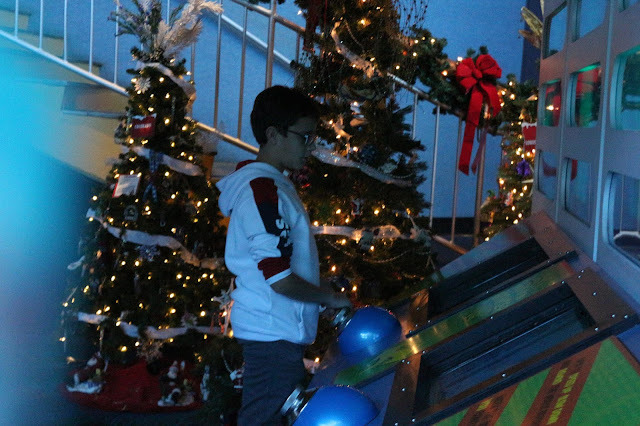 And speaking of interactive, there were quite a few displays for my son and I to test out. This one had a lot of facts and pictures of things related to, or living in the water. You can see there are more trees behind him. 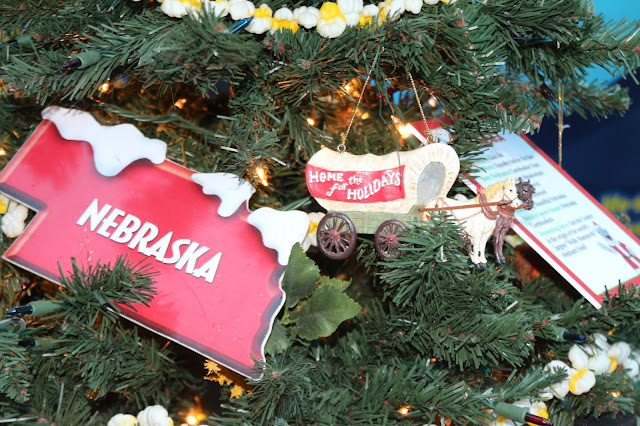 One thing about the Festival of Trees is that you get excited when you see a tree that has meaning to you. The last degree I earned was from the University of Nebraska, so I had to snap a picture of this one when we passed it by. 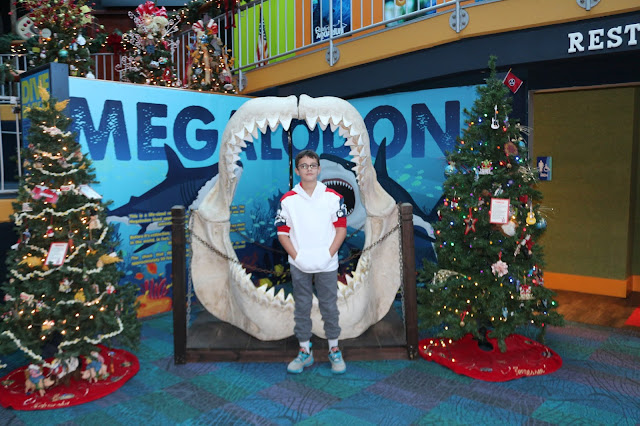 We took pictures in front of and behind the Megaladon Jaw. These kinds of photo opportunities are always fun when you are out and about, and again, you see more of the trees. A little truth behind this photo...we didn't realize you could go behind it at first to get the better and more fun shot, until we saw another family doing it. I saw the chain and my brain instantly thought off-limits. But, it was only off limits to touching the teeth. Duh. :) 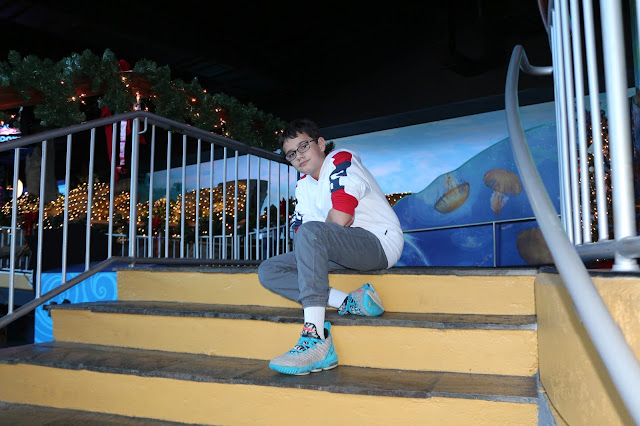 Little man sat to rest while I looked for something in my purse. I thought he looked handsome there just chilling, so this pic. isn't really about anything in the aquarium; it's just one I took for me. :) He's getting so big lately, that it's hard for me not to reflect on what a great young man he is becoming, and how fast his childhood is being left behind. He says and acts more and more grown up everyday. That's one of many reasons I like to get together with his grown siblings. His older two brothers get him acting like a kid again (because they're all just goofy together). My daughter is the voice of reason in the bunch, opting to be a mature mommy with her little one, and just watching the antics of the fellas (her man included). ;) 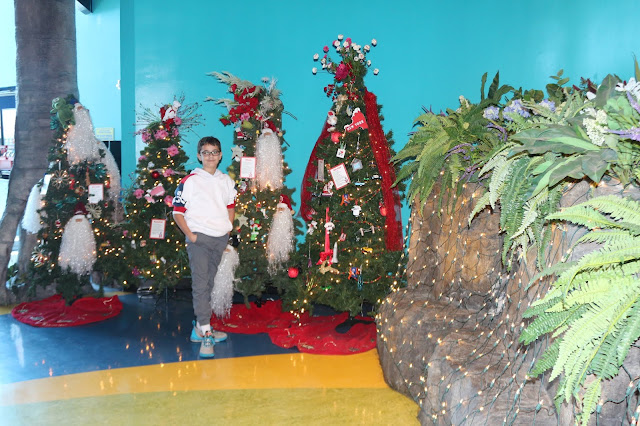 This picture was taken just outside of the glass bottom boat ride we took. 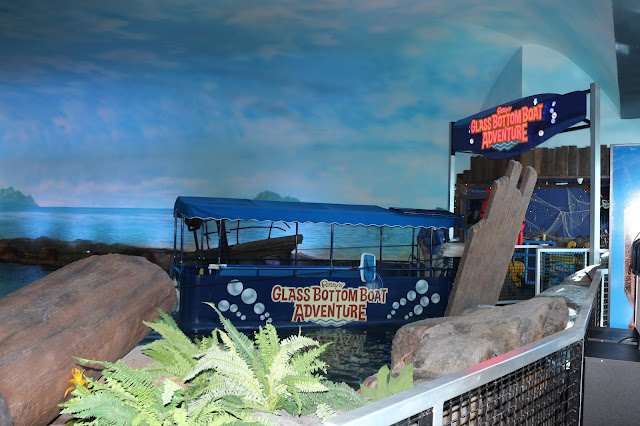 It wasn't a big ride, quite simple in fact, with an arm-powered motor (the girl rowed us around in it), but it was a neat perspective, to see the sharks and other aquatic animals from an on-top perpsective. 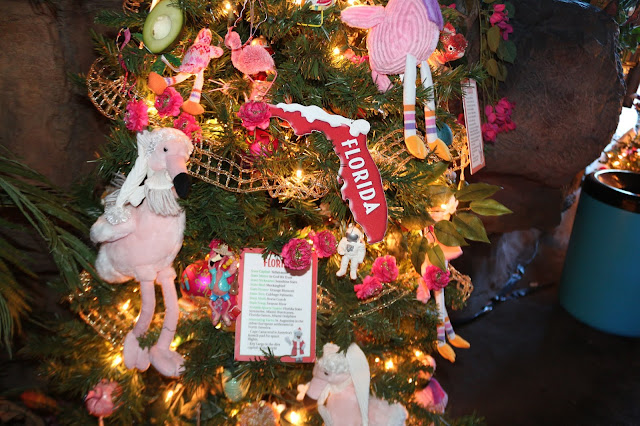 We speculated about what would be on the Florida tree and I was delighted to see that my guess of pink flamingos was spot on, LOL! My son had guessed a Santa in a sunny situation, and he was right about that one too. 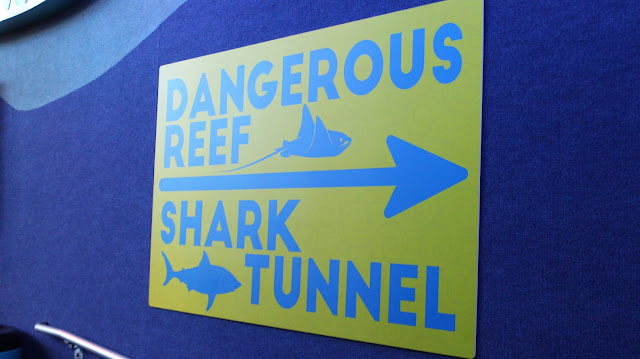 If there is a shark tunnel in an aquarium, then that is always my favorite section. Ripley's had one, so off we went to see it and explore. 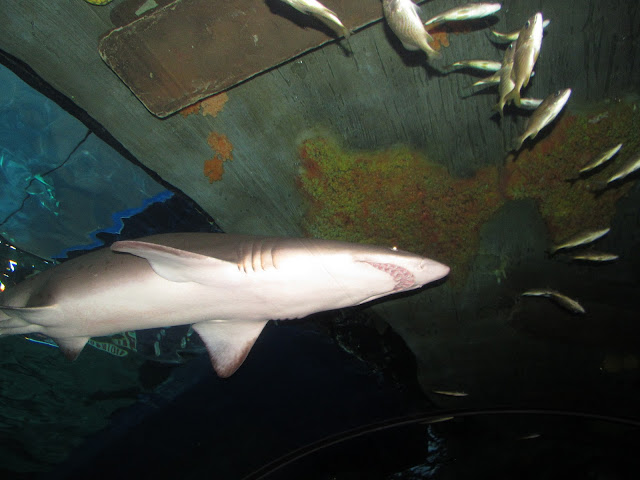 They had several types of sharks in the tank, so of course that was interesting to see. It's not often you get up close and personal with one of those predators (and thank goodness this is the only way we have in real life!). 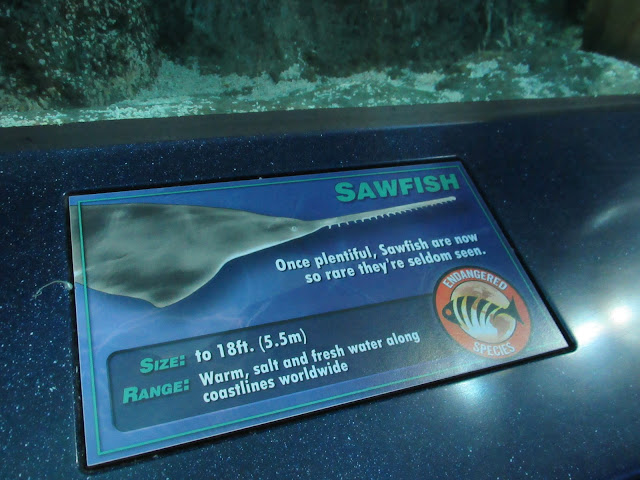 I'd actually never even heard of a Sawfish Shark prior to visiting Ripley's. We saw the sign and were hoping to see one in swimming about. The sign noted that they are currently listed as an endangered species. 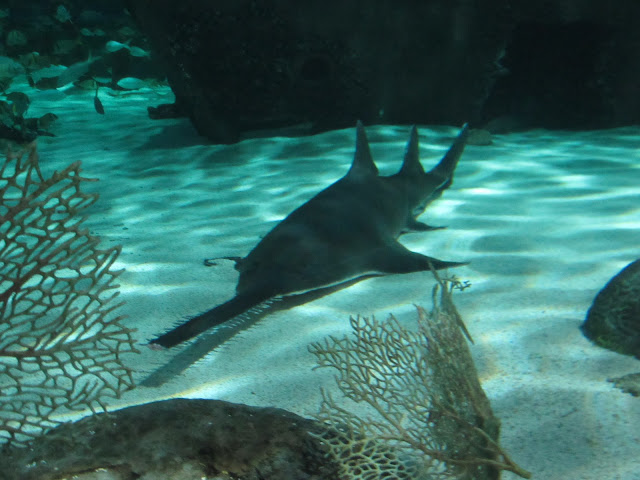 We didn't see one until we rounded the bend to exit, but just before we left, there he was, chilling on the bottom of the tank. He (she?) tolerated us taking pictures for a couple of minutes (no flash), then got up and swam away. The bottom of this shark has a smiley face that looks similar to a stingray. 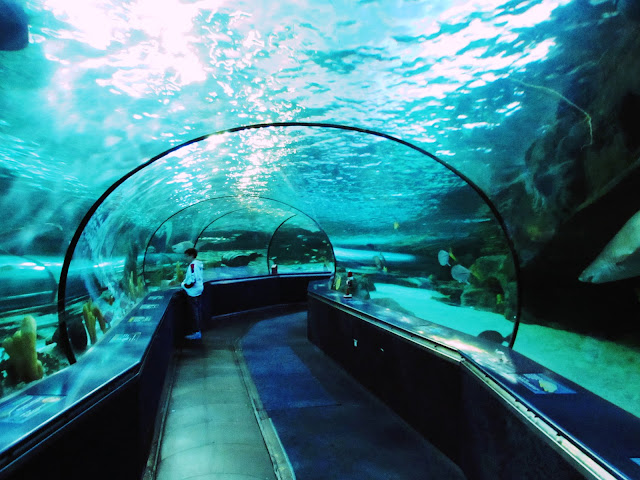 It's hard to get a good picture in these tunnels, but they always look so spectacular in person, that you can't help but try. :) In this picture, towards the end, there is a couple looking in the tank and they have a little boy with them who is jumping up and down and screaming that he sees the big sea turtle. I'm not sure if he'd been looking for it, or was just excited to see it, but that was Christmas and New Year's all wrapped up in one for him when that turtle passed by. :) 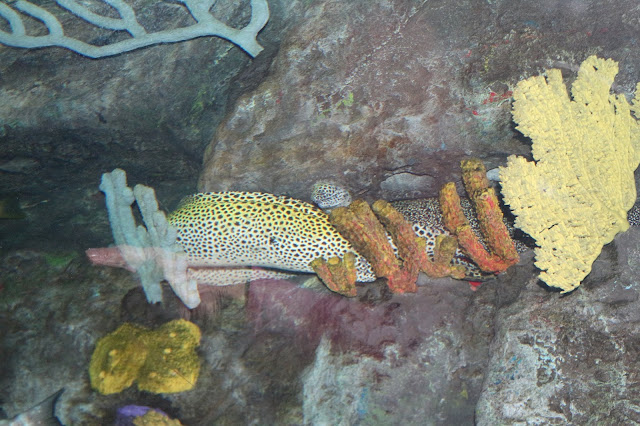 Also on the way out we came across some Moray Eeels. They were pretty exquisite in their own right, and a little menacing too. I have photos of them printed in albums from dives years ago. They fascinated and scared me then, and I still feel the same way today. I'm not going to lie, I'd much rather see one in a tank than in the ocean. 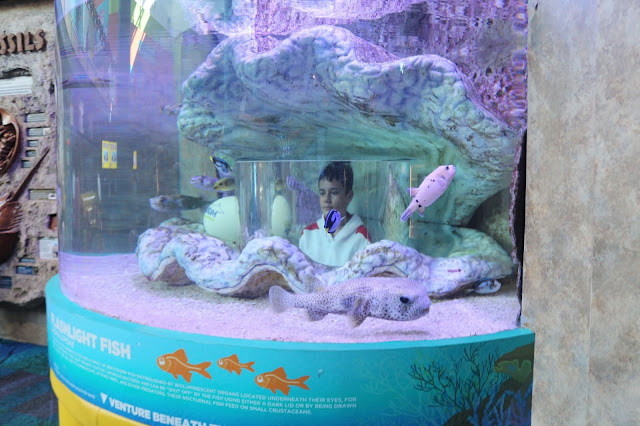 There was a mom trying desperately to get her child to crawl under this tank and pop her head through the bubble so she could get a picture. The little girl was too scared to go under, and the mom wouldn't let up. It was a frustrating situation for both of them, lol, so my son took it upon himself to show the little girl that it was easy and fun to go inside. She laughed at him in there, and he made faces, which made it better (believe me, this child can make some faces). I am happy to report that the mom got her photo opp, and the little girl was super happy to do so; the funniest thing though, is that she was a wee bit short and you couldn't really see her whole head over the top yet, lolol. Oh well, all's well that ends well, or so they so, whoever they are... :) 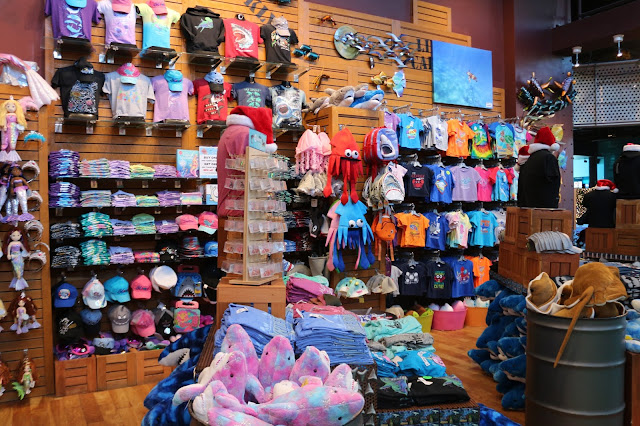 We took a break to head into the on-site gift shop because I like to get a Christmas ornament for our tree when we travel. They did have quite a few, and we brought home a puffer fish with the name of the aquarium on it that we both really like. 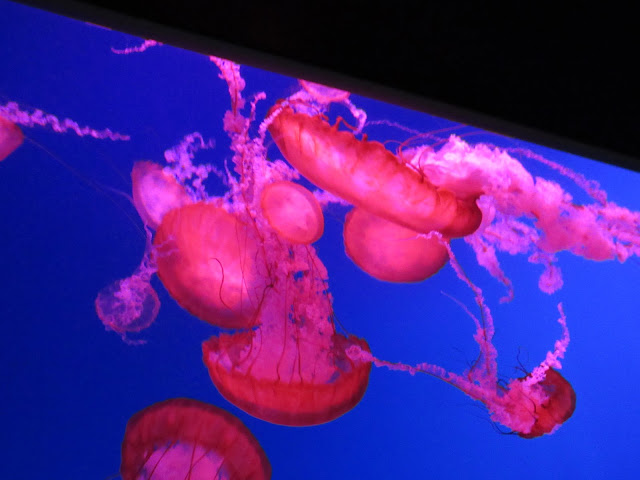 When we were finished shopping, we went to the area where the jellyfish are, and I always like to spend time with the jellies, but this time they had the lights colored, and that made everything look extra amazing. I could have stayed here a lot longer watching than I did, but I stayed a sufficient amount of time. No apologies, that area was great. 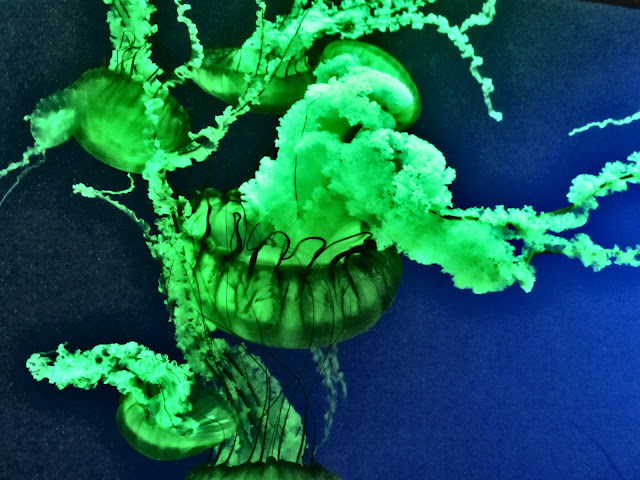 I thought the colors really brought out the details in the jellyfish. They made great pictures too. I actually printed these for one of our travel albums. I know a lot of people don't print photos anymore, but they make me happy, so I do. 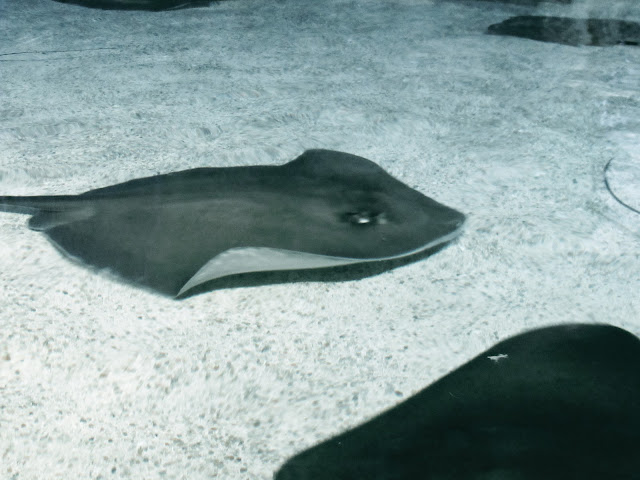 Every bit as much as I enjoyed the jellyfish, my son enjoyed petting the sting rays. There were big and small ones, and the lighter-colored small ones would brush up against the rock he was near, coming part way out of the water and get him wet. He laughed every time and waited for it to come back around to do it again. 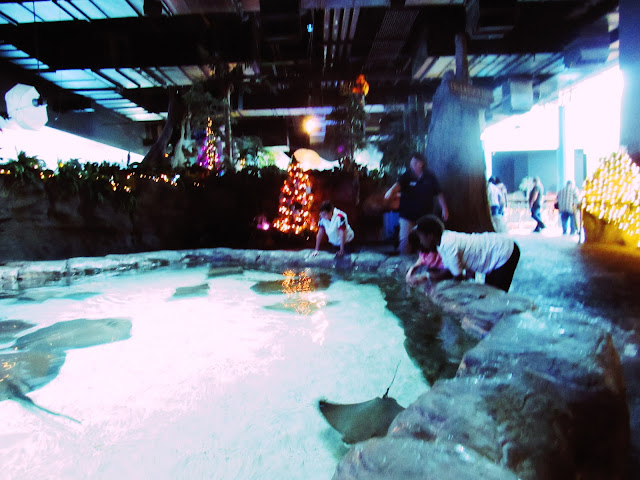 The worker behind him in the picture above, came over to him and had him kneel down so he could get a better feel of them. She showed him how to touch them properly and we stayed in this area a good long while. 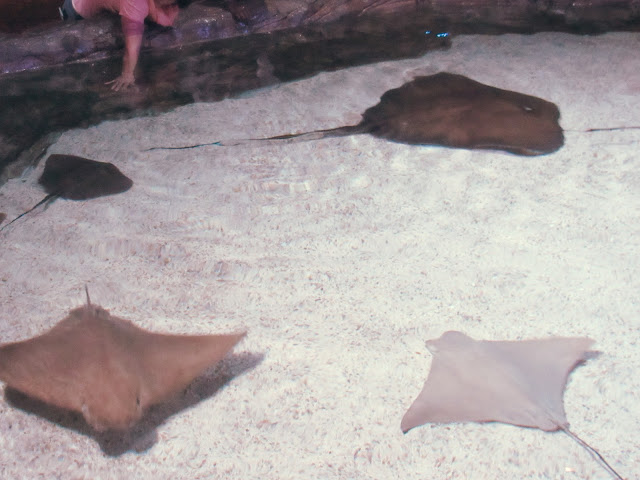 This light one on the far-right is the one that was so very playful. You can pay extra to swim with them. That would probably be really unique and memorable! 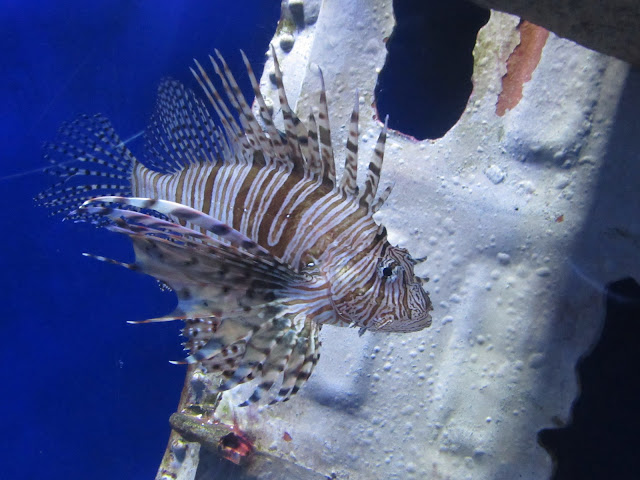 As we moved on, the Lion Fish caught my eye. We used to have one in a saltwater tank years ago. That was back in the day when it was an adventure to go snorkel diving for fish (not the Lion Fish, but many others). Seeing this guy took me waaaaay back to that time (I only had one child then!!). No way would I be ambitious enough to do that today. In fact, I'm not ambitious enough to own a tank (it was beautiful but it was a LOT of work). Seeing it here was cool though, until I looked around the backside of this white block...there were SO MANY of them behind there just sitting still (I guess sleeping?). It was mildly alarming and unsettling because they were so still you really only noticed them gradually, and then when you saw how many there really were, you were like, what the what??! Lion fish are amazing for sure, but that was still a little jeepers.

Ripley's Aquarium in Myrtle Beach, South Carolina is a nice place to go and spend part of your day. We had a great time visiting, and if we lived in the area, we would go again. Mark it for future trips, or if you are in the neighborhood already, The Festival of Trees is on display the whole month of December.  I can highly recommend a visit for the fam. (in fact, I think I'll head on over to TripAdvisor now to do so). Learn more by visiting the website. You can also follow along on Instagram, Facebook and/or Twitter.