Kitty Cardboard Gives All New Meaning to the Cardboard Box! 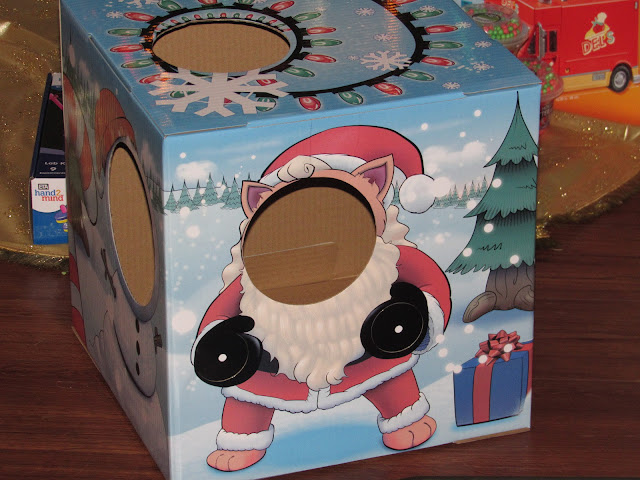 So for every single thing that has a box this holiday season, and SO many things have a a box...the cat has decided to inspect them, and sometimes sleep in them too. Every.single.one. It's cute. So cute, that we have a hard time getting those boxes out of here and to the recycle bin!!! Honestly, we just want to keep them for her, but who wants ugly cardboard boxes hanging around in their living room? Not I. My tolerance level for them never lasted longer than when she would jump out to mosey around (or nosy around, I should say) another part of the house for awhile. She never seemed to notice that I took 'her' boxes away. She's pretty chill like that... and rolls with it. We really did hit the jackpot for finding a cool cat. 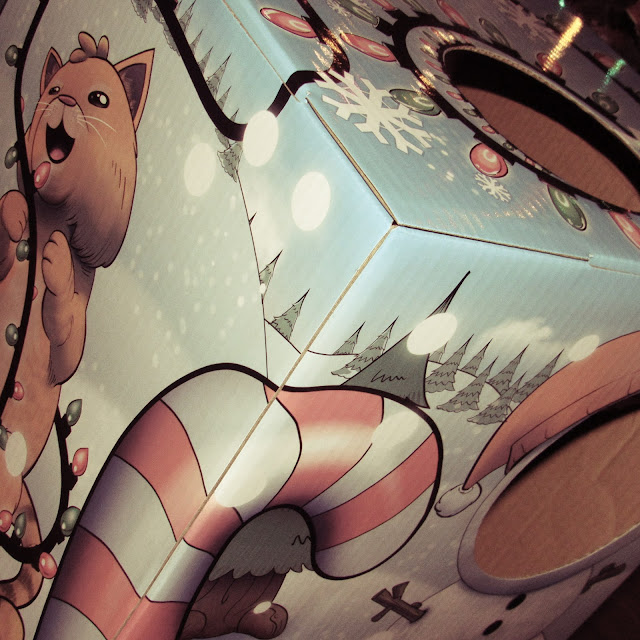 There is a super fun solution to our cardboard box dilemma, and that comes int the form of Kitty Cardboard!! 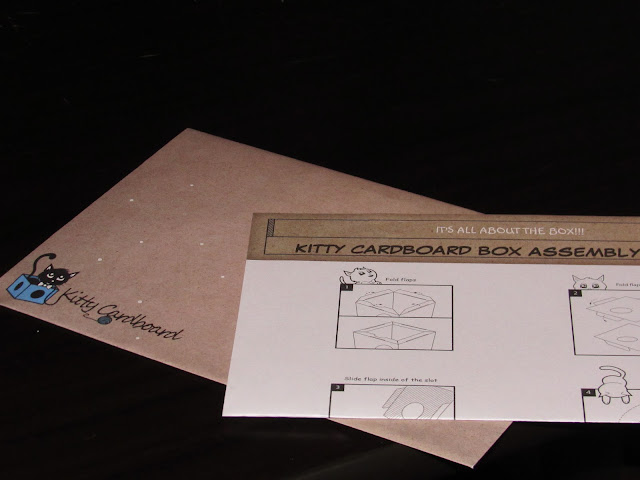 They have created these adorable, super easy to assemble (it literally takes seconds) box that is decorated. This one is a holiday print, which makes it fun considering the season. Now kitty can have her box out, and it's all a part of the decorative scheme going on in our living room. :) 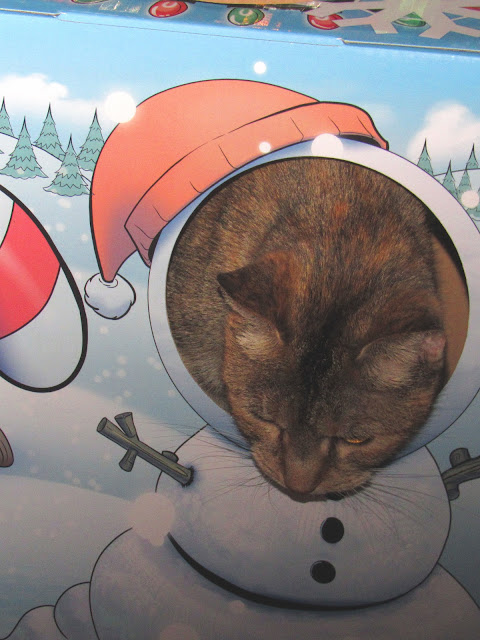 There are several holes for her to climb in and out of, and of course when her head is right where it is supposed to be, it is rather comical and everyone reaches for their phones. None of us thus far have moved fast enough though...and she doesn't care. Our pictures are not her concern. Still and the same, you can see it's a cute concept. Really cute. 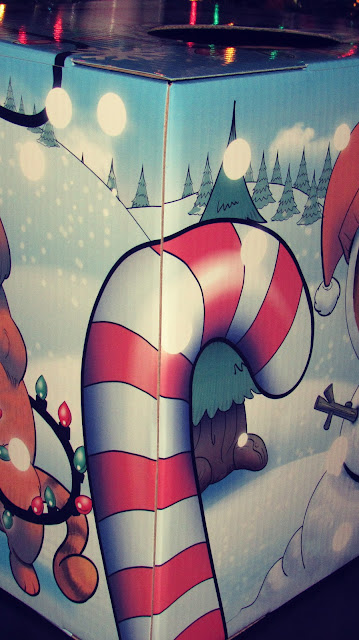 I like that the decoration spills over to the other side instead of breaking it up. It makes it more fluid, and easy on the eyes. It's actually a designed or themed Kitty Box that is fun to have in the room. I like this holiday version and will keep it up through January, before I switch to a different, fun theme for the remainder of the year. Then, we'll take this one out again after Thanksgiving to use again throughout the holiday season next year. 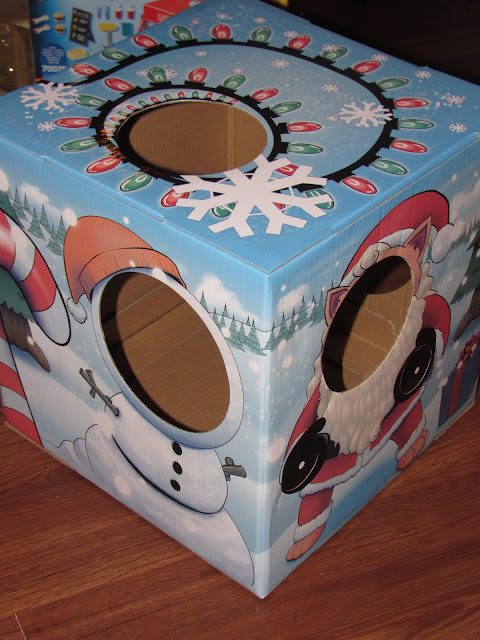 There is a hole on top to climb in and out of too. Our cat used that one first, but since then she's only used the sides to enter or exit. 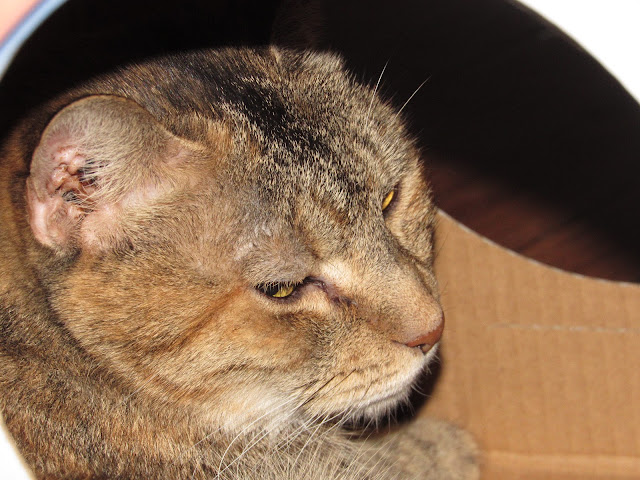 Some cats might use it to play. Ours uses it to take a siesta (or she would if her obnoxious owner would quit putting that flash in her eyes). 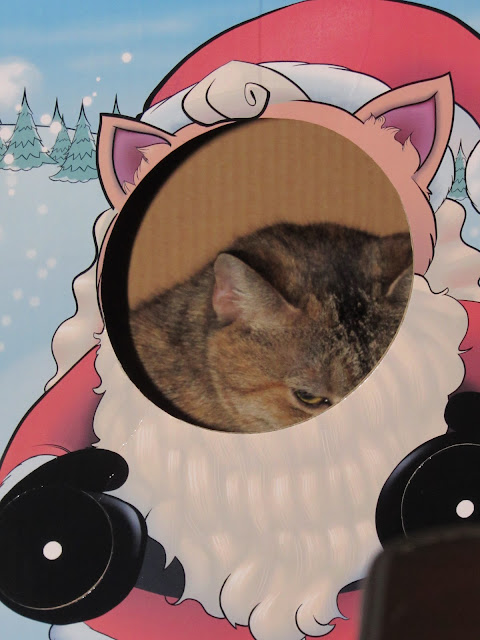 She likes it, and even though she won't pose for me, and I keep getting these 'almost' pictures, we still love the Cardboard Kitty. Our kitty gal loves it too, and this one, she doesn't have to worry about me recycling it because it's way too cute to even consider such a thing!

Honey (the color she used to be, but now even in just the kind of short time we've had her, she's turning more and more gray!) loves her Kitty Cardboard and uses it quite a bit. Sometimes though, she still follows me around and wants to rest by me (unless the boy calls her and then all lovey bets are off), and that's okay too. :)

This is one of those simple concepts that you see and love, or at least we did and do! I love our Kitty Cardboard cat apartment, and so does everyone who comes in the house. It's an adorable idea, and way better to have for the cat than a plain cardboard box used for shipping, and apparently it's better than a soft cat bad too, since the one we purchased a couple of years ago, had been used only once, but this box is used daily. 😄 Cats love Kitty Cardboard, and so do I! For each box purchased, one box is donated. Learn more by visiting the website.
on December 31, 2019