This is a sponsored post. All opinions stated are genuine and my own. 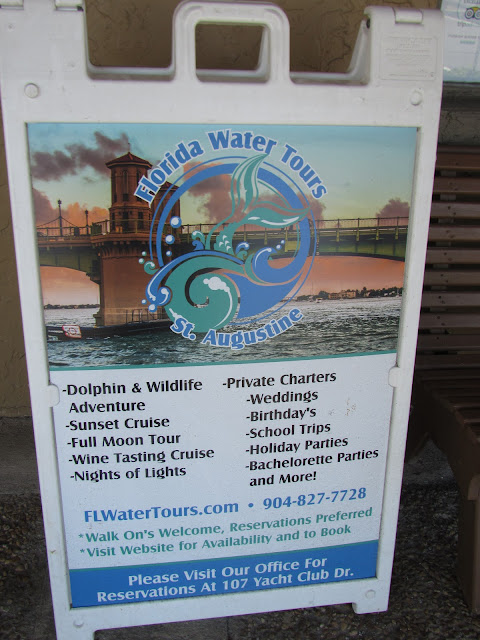 St. Augustine is Florida's oldest city. We recently took a trip there, and one of the things we wanted to do was explore the beautiful water. We researched the reviews on Trip Advisor and selected Florida Water Tours. It was a good choice. Just to note, we did make reservations, but the sign says walk-ins are welcome. It's worth checking into if you're there and they're about to go (and you want to go too), but our boat was full, so I do recommend calling ahead. 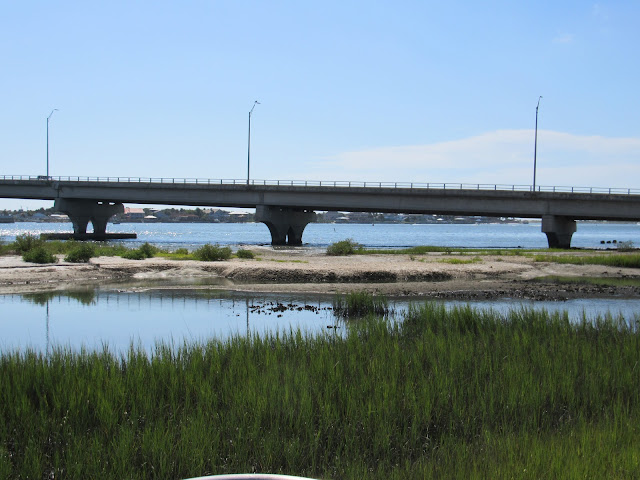 There are quite a few cruise excursions to choose from including Sunset, Full Moon, and the one we took, the Dolphin and Wildlife Adventure. This is a 90-minute cruise for all ages that takes you around beautiful St. Augustine, with a waterside view. 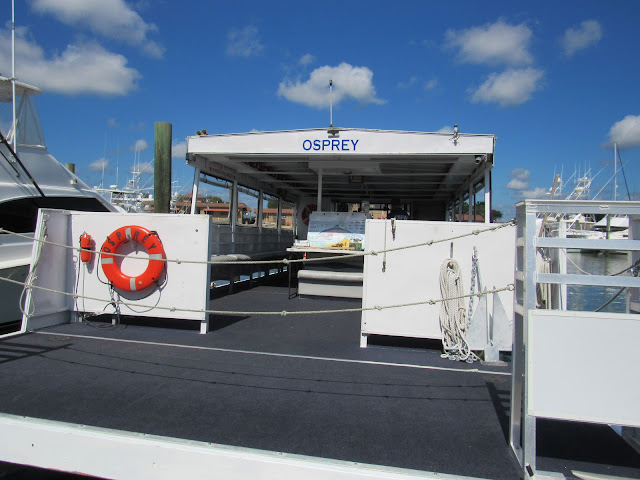 Our boat was called the Osprey, and she was a beauty. There were plenty of seats for all, and it was easy to walk around once the boat got moving. The sides and end of the boat had open-space areas where everyone could comfortably fit, to see the wonderful things we came across along the way. 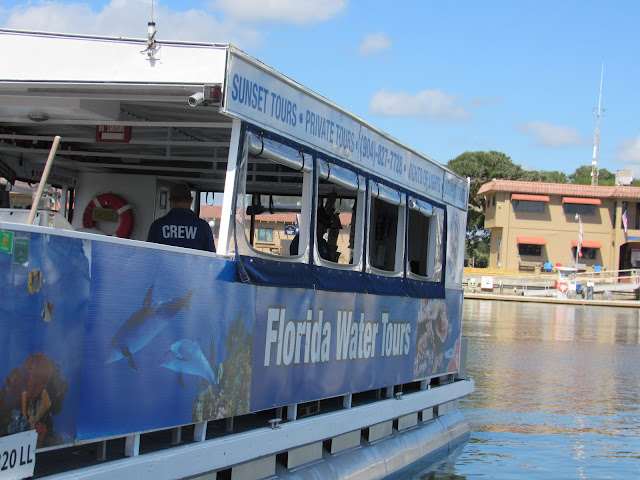 There was a covered portion too, in case rain popped up, or you wanted to get out of the sun for a bit. 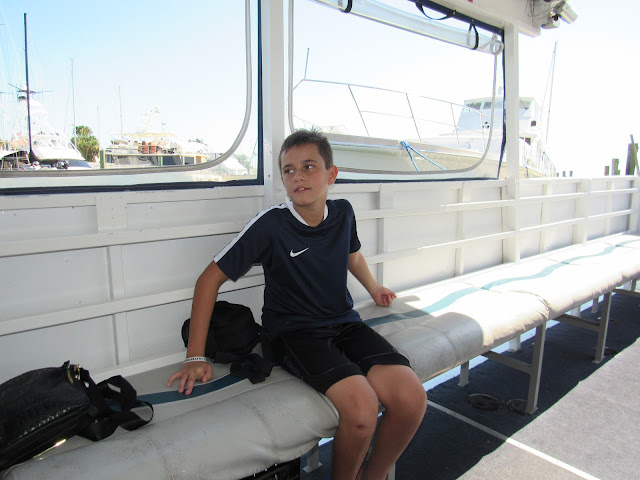 The seats on the inside of the boat were cushioned and comfy. As you can see, most people opted to go to the open-ended areas though, as did we right after taking this photo. 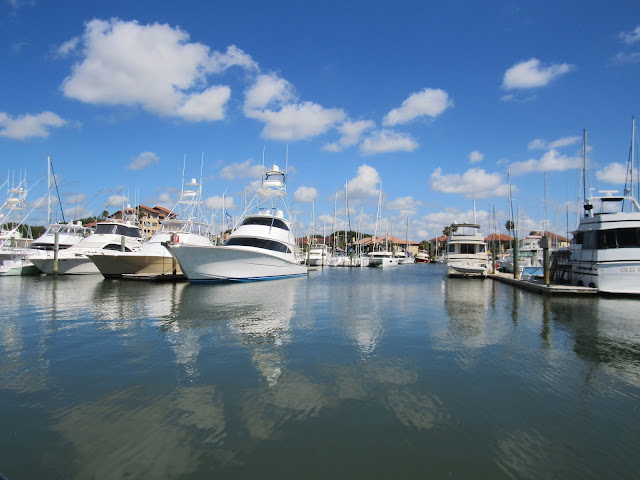 I love to see the nature scenes, but coming across other boats, either moving or docked is always lovely for me as well. I've said it before, and I'll probably say it again, the older I get, the more I gravitate towards the water. I just love it. 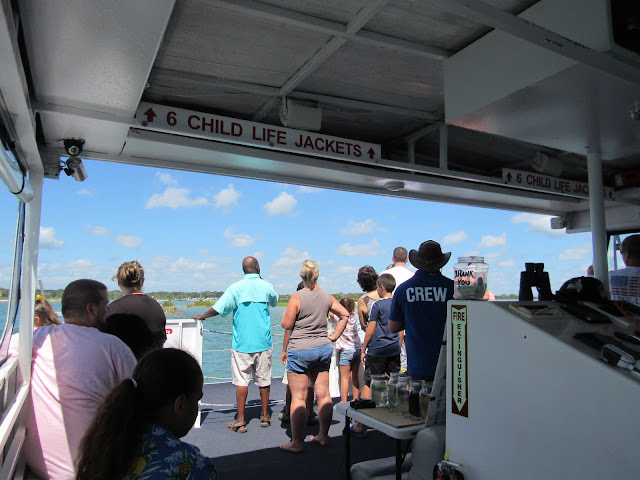 The boat has a pay-for cooler, where you can get drinks. We got soda, but in hindsight, we probably should have gotten water! Not because of any one reason, but if you're outside in the heat, you want to stay hydrated, and nothing does that better than H20. On the top-right you see a tip jar. There is also one as you exit the boat. There is no pressure whatsoever to leave money, in fact, it's not even mentioned, but the crew works for tips, and the 90-minute boat ride is great, so I recommend leaving one in either of those spots. 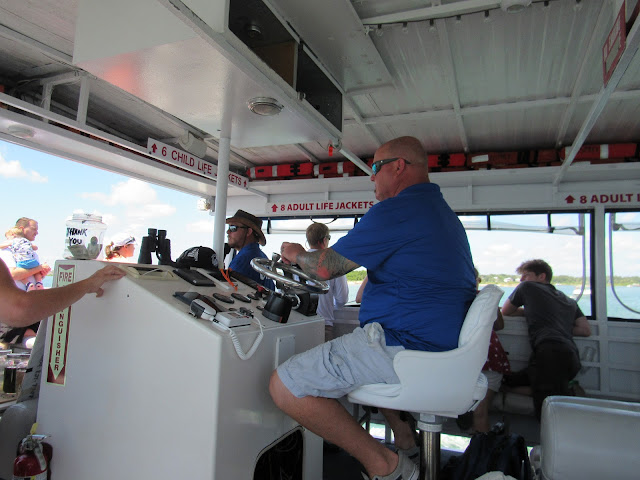 The captain and the guide were great. They worked together effortlessly, and changed course as needed when they thought we would come across something appealing. While a lot of people have reported seeing dolphins on this cruise, we didn't. We did, however, come across a manatee. When you spot something in the water, the guide will start to give you a history of what it is you are looking at, which I thought was a great way to run the boat. 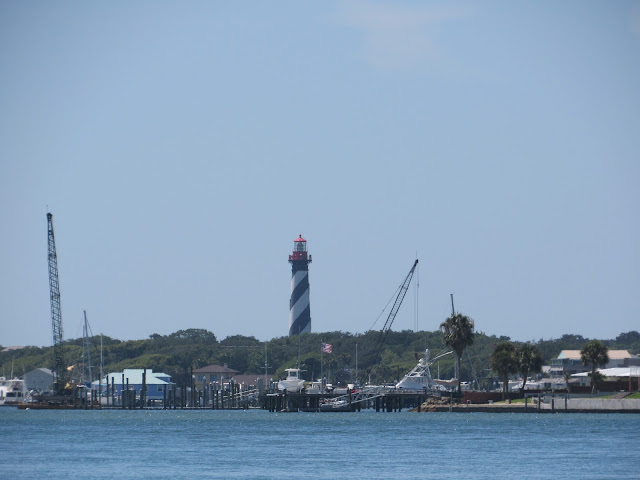 There's something to be said for seeing the sights of St. Augustine, from the water. It just gives you a different visual that is hard to ignore (and why would you want to?). Plus, there are no crowds to fight (or stairs to climb in the case of this lighthouse, lol). Not that I mind those things usually, but having a relaxed vantage point was nice as well. Very nice. 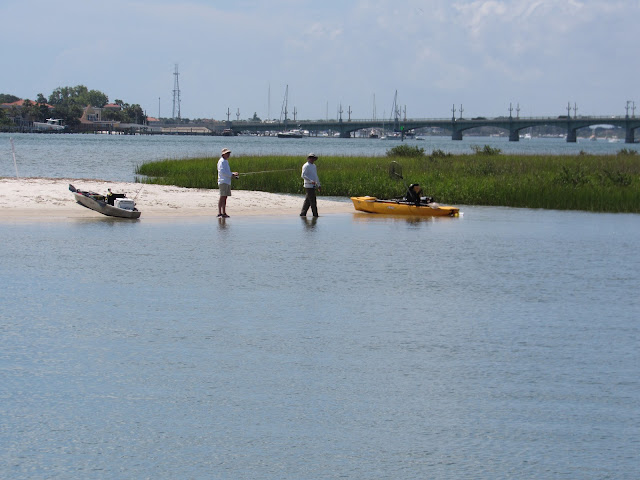 It was a great day to be on the water, so it was no surprise that there were quite a few people out and enjoying it as much as we were. 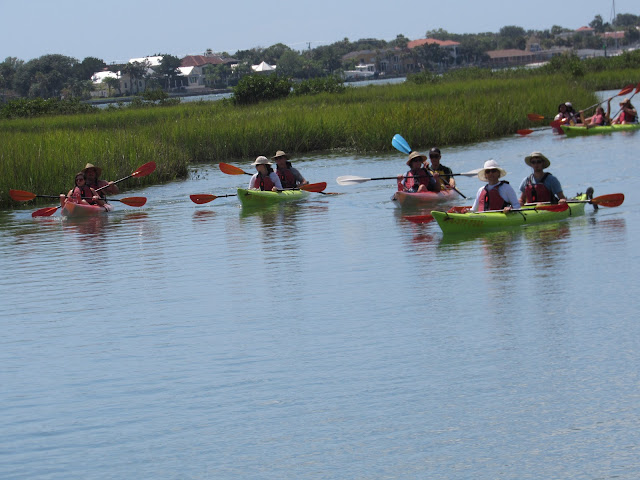 The guide on our tour did inform us that he and another member of the crew did offer kayak tours, if you were interested. He seemed very capable and knowledgeable, so if were going to book that, I would have been comfortable choosing them as our guides. I'm honestly not huge on kayaking, but my kids' aunt was along and she LOVES it. 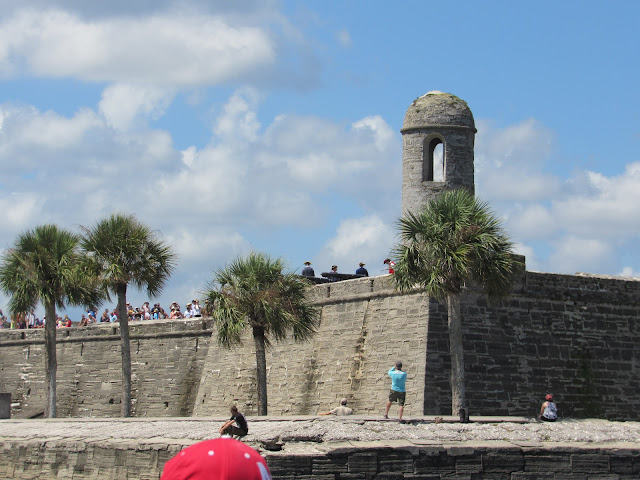 At one point in our ride, we came across the backside of Castillo de San Marcos, a large Spanish stone fortress built to protect and defend Spain's claim into St. Augustine years ago. There were changes of hand at this fort, but  never due to defeat. 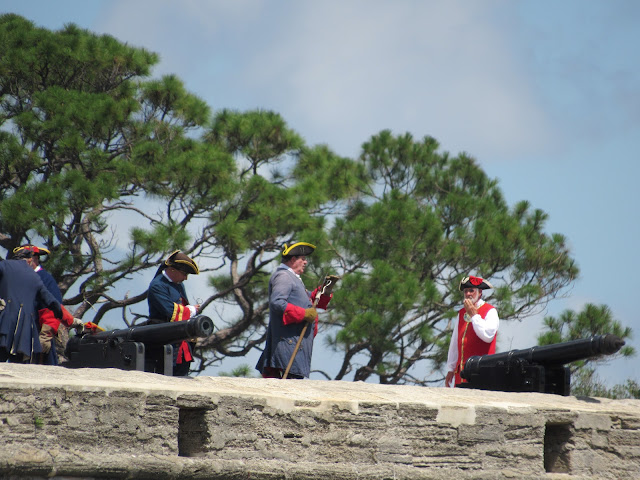 Our timing was impeccable, as we got there right when they were firing the cannon. We all covered our ears, and ooh'd and ahh'd at the boat-view of the experience. Again, no crowds, and no breezeless, beating hot sun on you while you stood to watch. We had the ocean breeze in our faces, and it was as pleasant as pleasant could be. 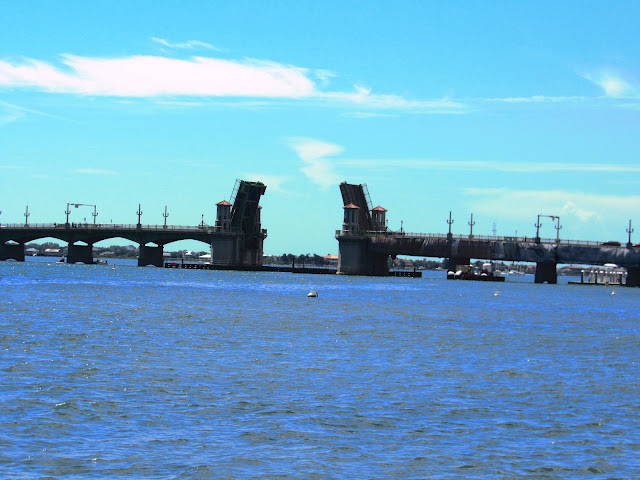 I'm not sure why I get excited every time a bridge goes up for a big boat. I've seen it a million times on land (and have been stuck in the traffic that can build up because of it), but it never gets old. 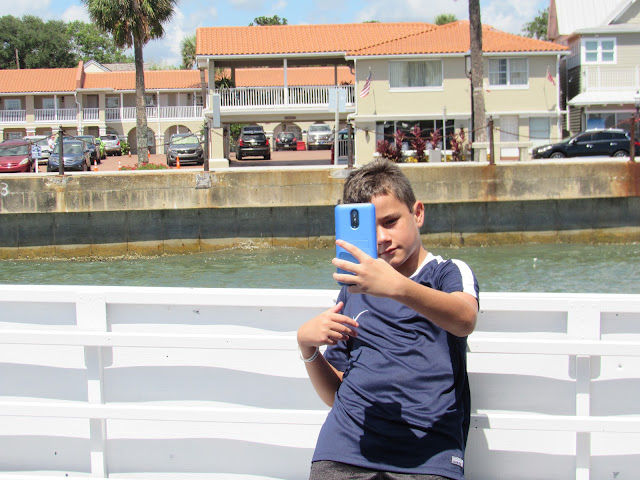 My son decided taking selfies to send his friends would be a good idea. I should have told him he was on the wrong side of the boat (the other side had the water views), but meh, I let it go. If you see the things he and his friends find amusing, you would understand (goofy dancing, making faces, selfies with the cat). ;) At this age, they just pretty much giggle at everything. 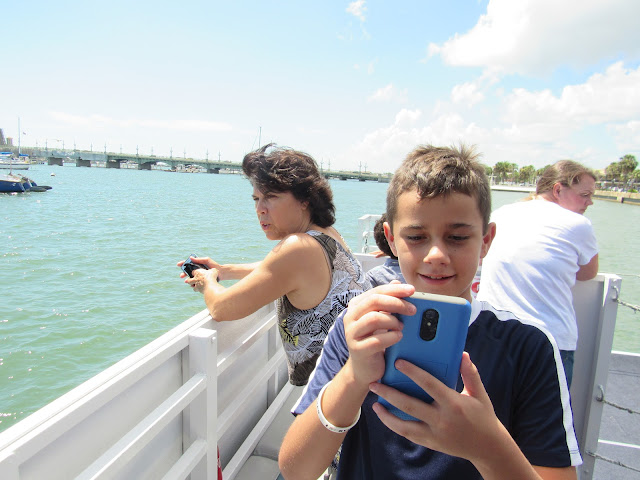 He did change his viewpoint later in the ride (that is his aunt right behind him to the left), but it wasn't a view I was happy with him getting (for some reason, he thinks it's hilarious to send his friends videos of me). 😏 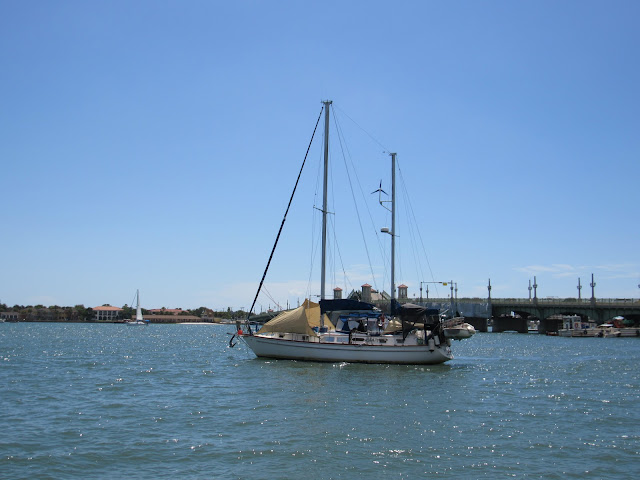 One of the things I like about a peaceful boat ride, is seeing other boats on the water. It's a camaraderie much like military people or motorcycle riders seem to have. Everyone is happy to acknowledge the other party as part of the in-crowd, or group. ;)  Almost every boat we passed had people waving hello, and of course we waved in return. 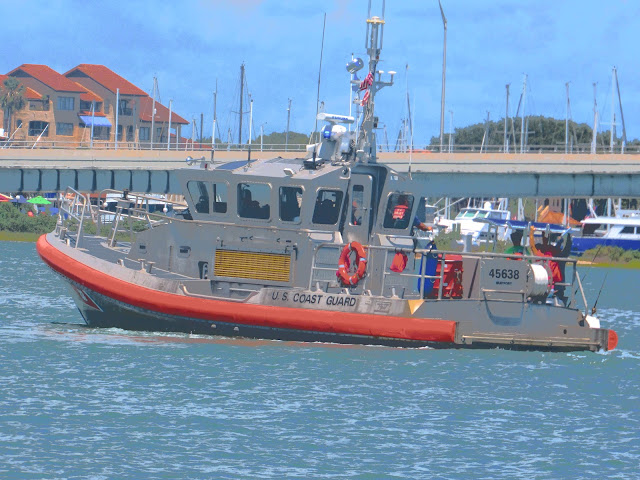 There was one exception to the waving rule. This boat (the U.S. Coast Guard) was chasing down another boat, and tooting his horn as he did. The boat he was behind was oblivious it seemed, and I had to inwardly chuckle, because I'm kind of a goofus and can see that driver being me. It clearly was not a serious infraction taking place because once the Coast Guard got the driver's attention and said what he needed to say, he turned around and went on his merry way. 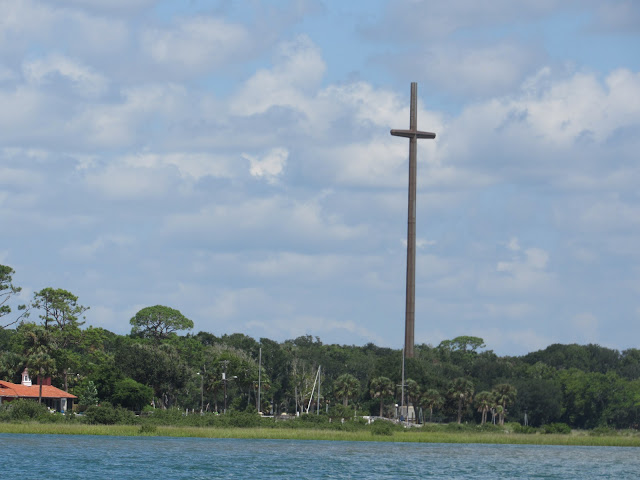 The time we spent seeing the coastal marshes, wetlands, wildlife and points of interest was so enjoyable that we felt like it was over very quickly! Truth be told though, we left and returned exactly on time, which wasn't really surprising, considering the captain and crew worked together very capably and efficiently. 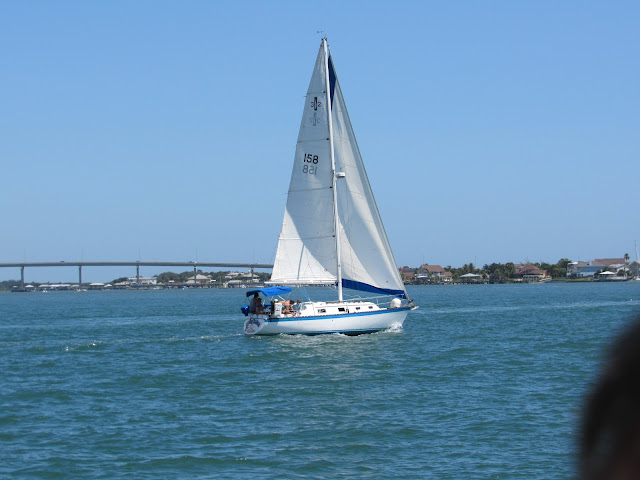 If you find yourself in or around St. Augustine, I do highly recommend Florida Water Tours. We had a wonderful time, and will be taking another tour when we return, perhaps on the Sunset Cruise, where I'm sure the colors in the sky are pretty amazing to behold. 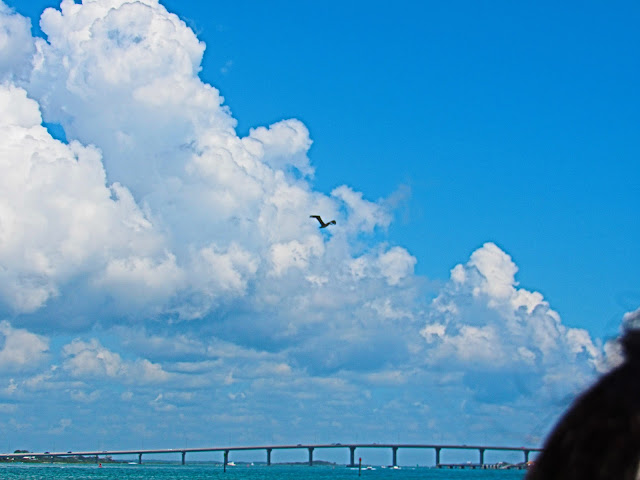 I will say the views we had in the daytime though, even when there was nothing but sky and water to see, were faaaantastic. That's a pelican coming in to land. I get excited when I see a pelican every.single.time. 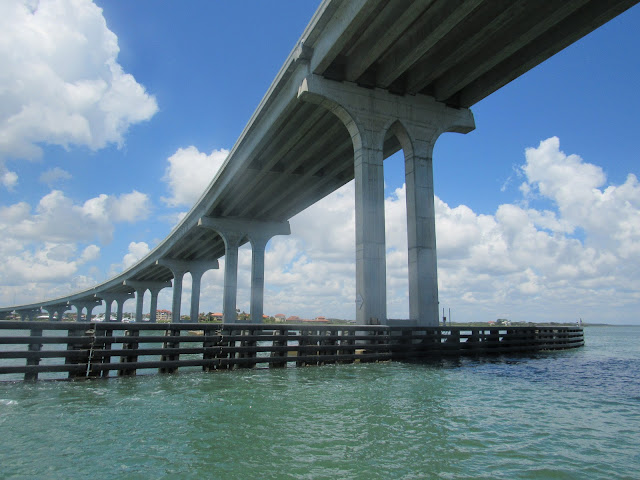