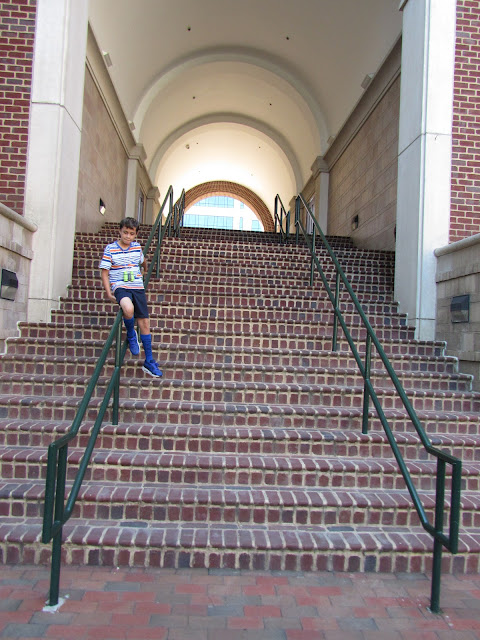 We have taken quite a few road trips from Florida to Ohio and from the north back down, so I'm sure we've passed through North Carolina at some point. I do not remember however, ever taking the time to park and go exploring, so when we stopped for gas we decided to check out the first city closest to us that we liked. Turns out that city was Charlotte and we instantly felt right at home. We knew from a quick online search that we were close to quite a few museums, so we parked on Church Street at the meters (which were free because it was the weekend), and set off for a day of adventure! 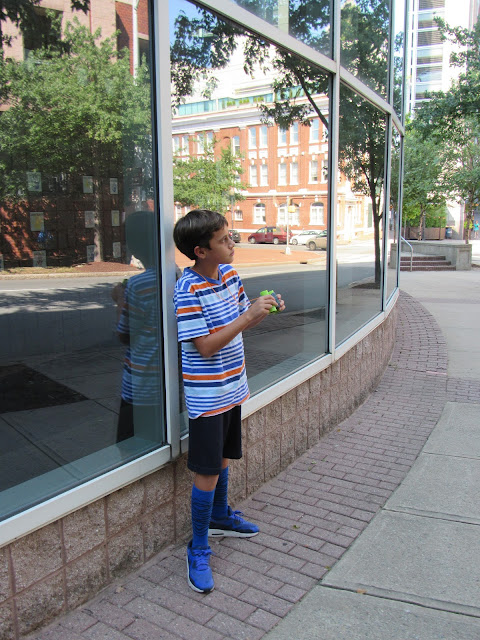 There were quite a few tall buildings, and my son had his binocs with him, so he enjoyed being able to see and tell me what they were before I could identify them. :) 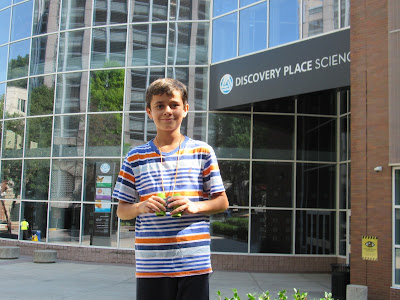 See this smile? That's what was plastered on his whole face, the entire time we were in Charlotte. Mine too, for that matter. :) 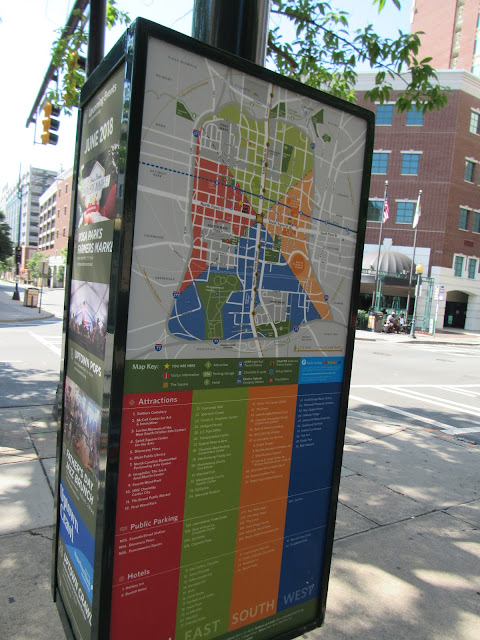 Turns out, we loved this city so much it was kind of a repeat of our impromptu trip to Savannah (GA), where we had been the day before coming here. Every time we thought we had better get on the road and get moving, we ran into something else we wanted to see or do (and did). That was okay though, it was all part of the road trip experience!! 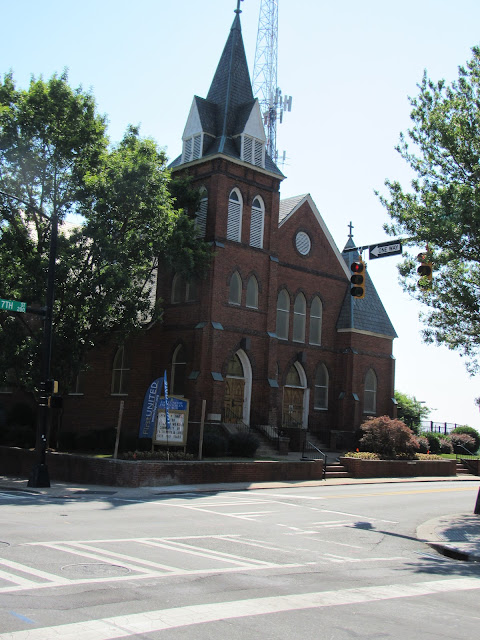 Quite honestly, though we loved visiting the sites in the city, just walking around made you feel peaceful and happy. Everywhere we went was nice and clean, and the people were so courteous. I'm not sure if that's the theme of the city typically, but I suspect it to be true. It happened everywhere we went. I love where I live, but people are not always the friendliest, and you're definitely not engaging with strangers. Here is was typical and felt fine. 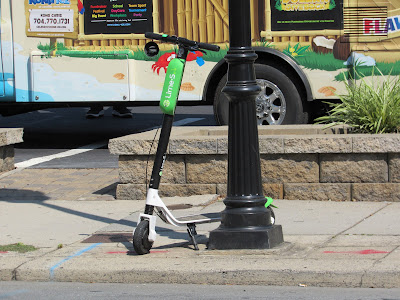 A lot of younger people were riding scooters throughout the city, and we found as we went that you could rent them, or bicycles if you wanted to get around faster than walking. Scooters for rent? Cool! 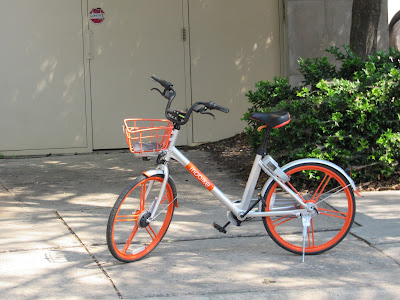 The bicycles had baskets and there was parking for them in front of many of the places you could visit. 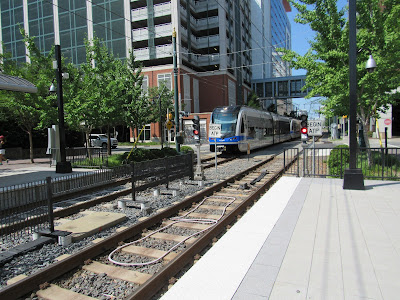 Here comes the train. Can you see it? It blends in well with the scenery in this picture. Perhaps it's unusual, but I liked being here just watching the trains come and go here at Seventh Street Station. 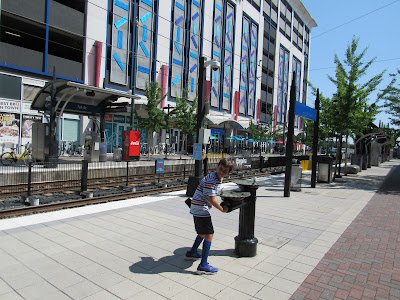 The water fountains weren't working, but besides that everything felt welcoming and festive in some sort of way here. 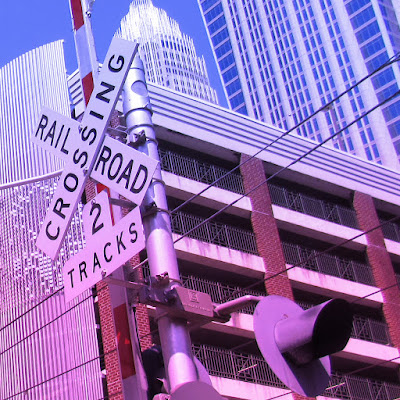 It also felt peaceful, and for the record, the trains were silent! I'm not sure why I liked this area as much as I did. It wasn't any one thing. I think it was just the overall aesthetic. 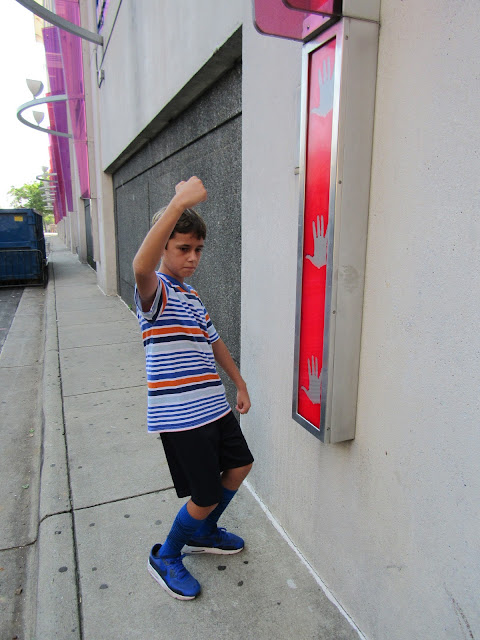 Even the buildings and alleyways felt safe here. No, we didn't venture into empty alleys for the most part, though we did run the length of this one so my son could play the musical panels all along the side of this building. 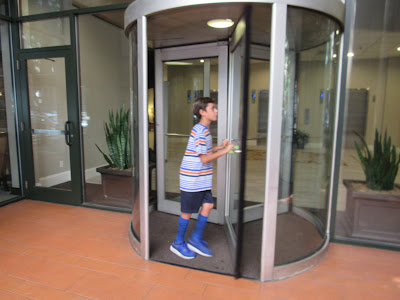 This revolving door beckoned to my son and since we were on vacation, I let him roam (in and then directly out). ;) 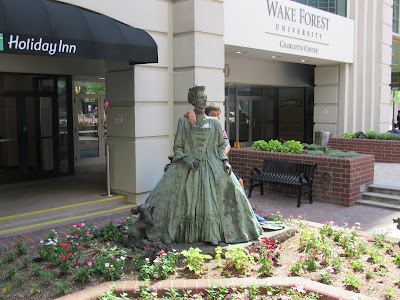 Turns out it was the entrance to the Holiday Inn. :) We walked around to the front of the hotel and found this lovely lady. I guess my son felt like she needed some lovies because he wrapped his arms right around her without hesitation. :) 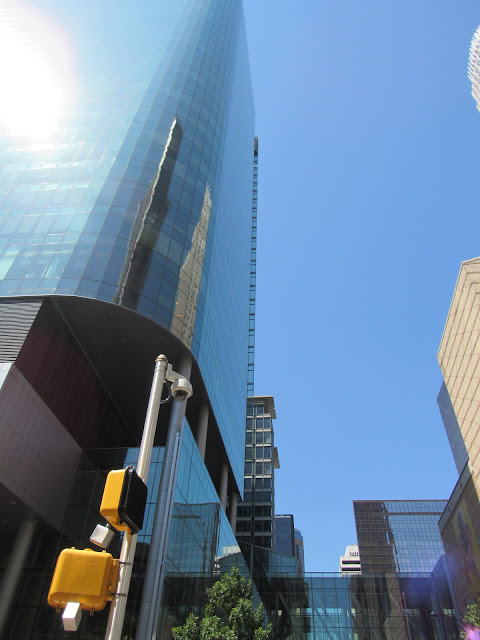 The bigger buildings in this area looked fantastic and gave it a big city feel. I'm not sure what the population in the area was, but it wasn't overrun with people and parking had been easy to find, so I don't think it's akin to big city numbers (I just checked, a little over 800k...more than I thought, but still not huge). This building just blended right in with the skyline! The walkway between buildings is glass so you can see people going across. I thought that was cool too. 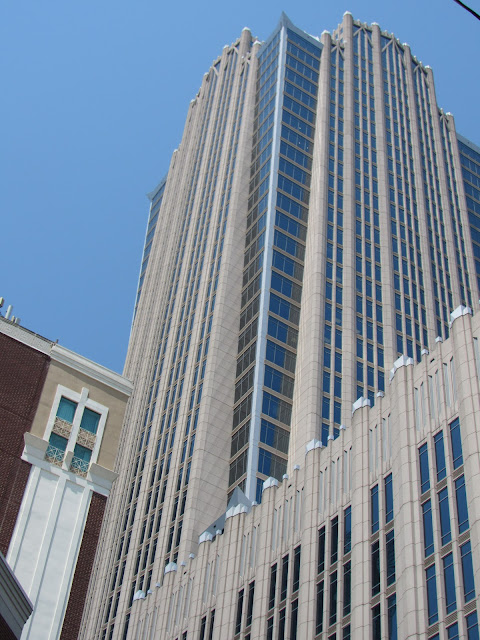 I don't know why I have such a fixation with big buildings, but I do. If they are well taken care of, or have something that is unique about them, I could stand and stare for days. 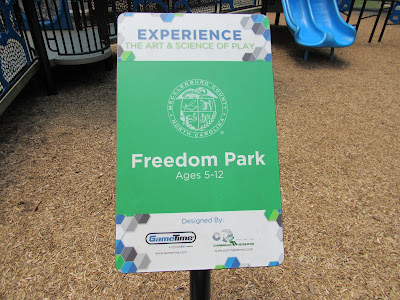 Freedom Park was our next stop in the city. There were several areas in the park for sports, picnics, and the like...tons of room for walking, and lots of room and time for thinking, and shade was everywhere!! The play parks were in the same general area and were sectioned off by age/interest. 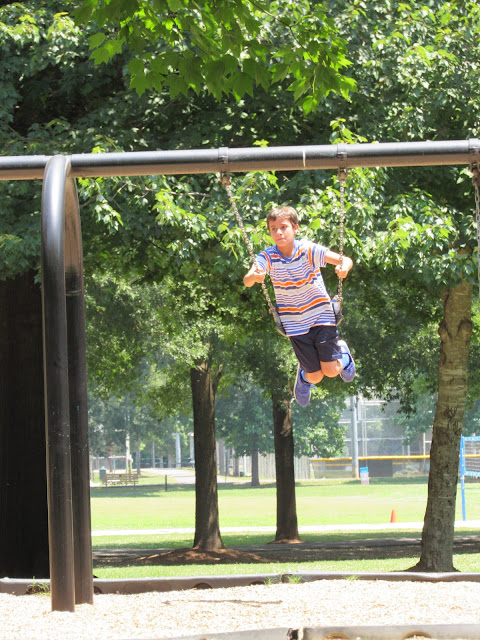 My son started off with the one closest to us (up to age 12) and made his way around. His first stop at a park is almost always the swings. He can get himself up pretty high, but he much prefers me to push or swing next to him to see who can get higher, faster. 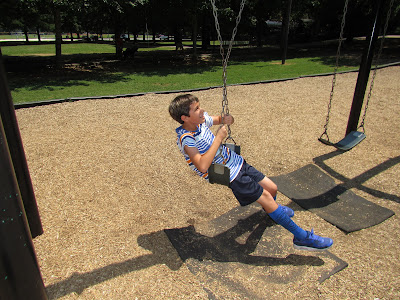 He likes to twist and let go too. These moments, I'm cherishing. He's looking more and more like a young man every day, and I know from past experience just how fast he'll be grown up and on his own. These moments matter. 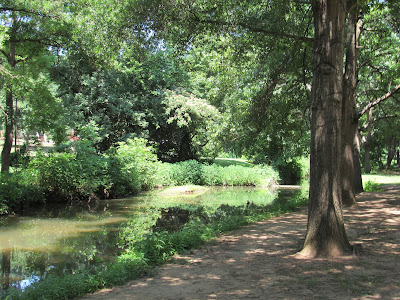 The woodsy, shady views all around us were calming, soothing if you will, and lent themselves well to our vacation mode. It felt like a lazy weekend with nothing to do but play, and that's exactly what we opted to do... 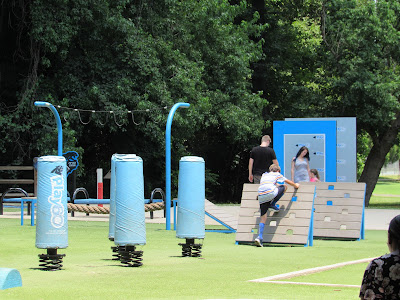 One of us, I will say, played much harder than the other! There was a section of the park donated by the Carolina Panthers. This is the area where kids my son's age gathered and stayed. The obstacle course definitely held appeal. 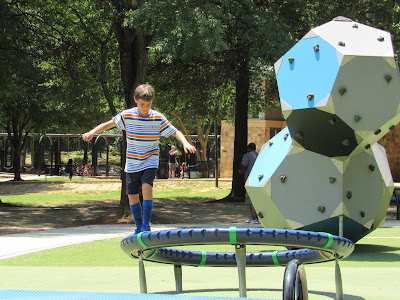 There were things to balance and climb on as well, lots of 'em, in fact. 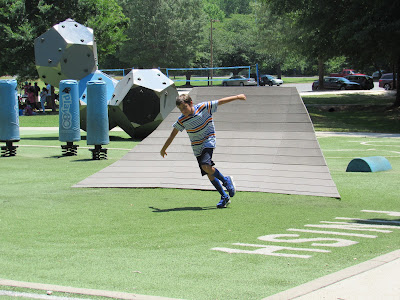 He was just running here, but it looks like he's trying to fly to me. :) 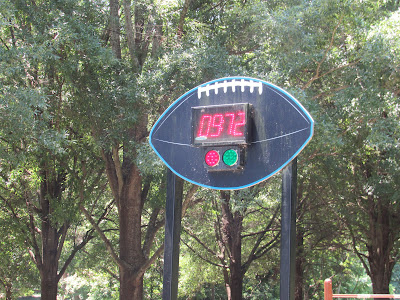 Probably the area where he spent the most time was the running zone. There was a clock to reset each time you ran the straight track. You could run solo or compete. The boys there were all competing. In fact, we left the area to get bottled water (on the other side of the park), and a couple of ice cones (so good on a hot day!), and this is where he wanted to return, which we did. 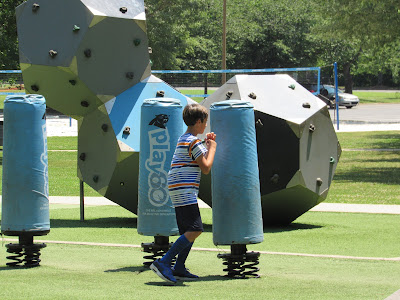 What a great idea for the NFL team to take part in the local play park for kids, in such a visual way. It added to the already outpouring of community we were feeling in this town. 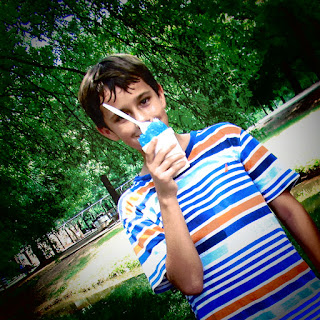 I can't even tell you how much time we spent in Freedom Park, but it was definitely hours. We weren't looking at the clock because who needs to do that when you're not on a schedule?! 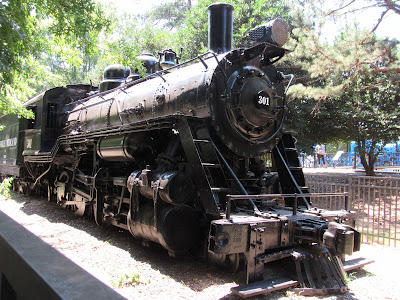 The last thing we saw on our way out was a train that was on display. You could walk inside and pose for pictures too, by peeking through the bars on the windows. This is the kind of train my friends and I would see going by the park we played in when we were kids. We used to leave pennies on the track for them to smash flat. Boy howdy, that was a big deal. I told my son about it, but I guess it's one of those things you have to experience yourself to appreciate. ;) 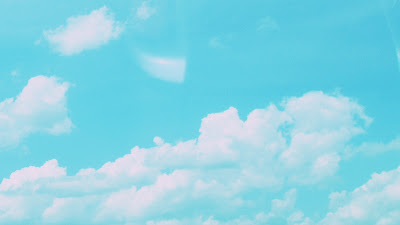 When it was time to go, this was our scene from the back window of my car. A beautiful sky to match a beautiful day. Charlotte, we thank you for your hospitality. You are now a forever favorite in our eyes.
on August 20, 2018