Why go to Tampa? There are Lots of Reasons Including Busch Gardens! 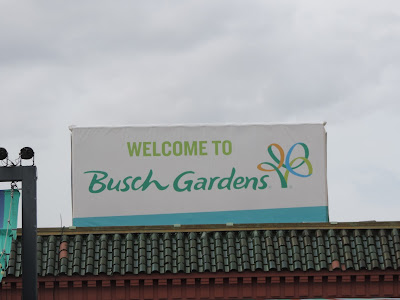 When you head to Busch Gardens in Tampa, Florida it makes for a nice day mixed between seeing animals and riding thrill rides. There is also a nice area for the younger kids to play, making this an amusement park for truly every age to enjoy. 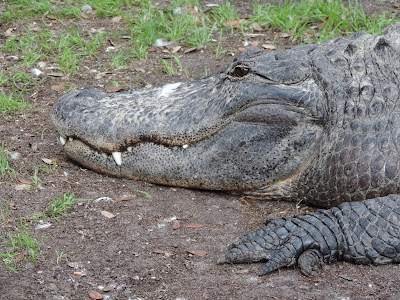 The first thing we came across was an American Alligator area. I am always intrigued to see them, but after watching YouTube videos were they climb into boats in an instant, or climb things like fences to get where they are going, I am glad this close up came only  from the zoom function on my camera. ;) 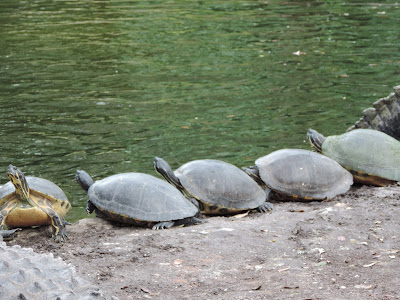 If you look to the left and right of these sunning turtles, in the same area, it's fairly easy to spot the alligator backs/tails. I always wonder why alligators don't eat the turtles when I see this...same for birds. I've seen birds sitting on the backs of gators and wondered what in the world they were thinking to land there of all the places in the world where they could rest. ;) 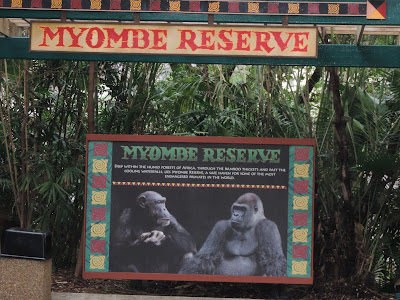 The Myombe Reserve area was set up nicely. We walked under a cool (literally the temperature drop was kind) rock tunnel that ended up in front of huge glass panes with magnificent chimpanzees and gorillas. This provided us with a great way to get up close and personal in their area without really disturbing them much. 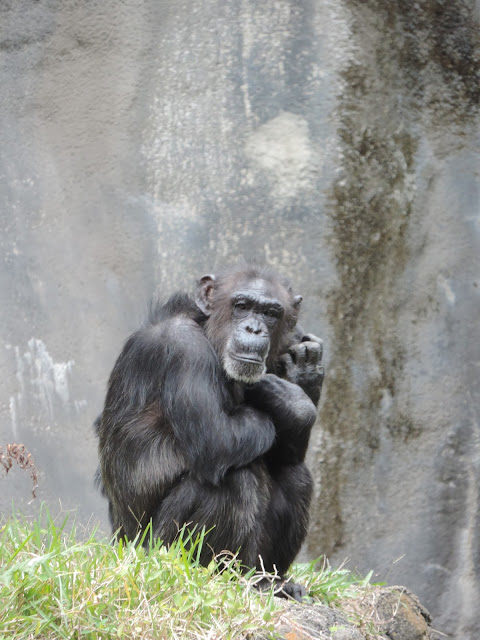 The Chimpanzees did a lot of eating, except this one who was chill and just sitting there for a bit. 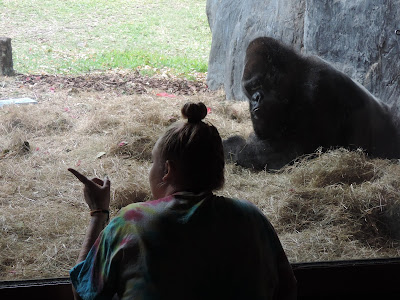 One of the gorillas was stretched out on his side, sound asleep while we were watching the chimpanzees. When he woke up, he turned around and kept starting at my daughter, who was talking about the other animals instead. I couldn't stop laughing. She was intrigued by something else, and he was intrigued by her. I was intrigued by the whole scene. :) 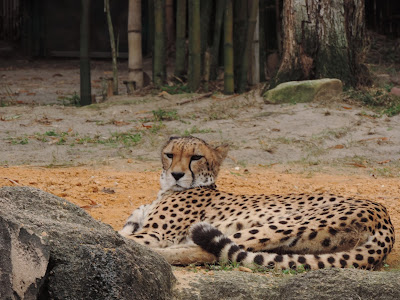 They have big cats at Busch Gardens too, and an area where you can see them. Bengal Tigers are there, and it's rumored there are, or used to be, white tigers. Wouldn't it be lovely to see a white tiger?! There was a beautiful Cheetah in a separate area of the park who looked disturbed by our visit, which awoke him (her?) from slumber. We snapped a picture and moved on to the roller coaster with the same name. :) 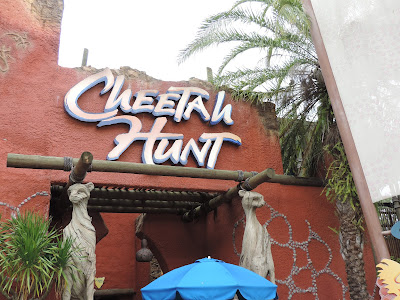 One thing you need to know about the coaster rides at Tampa Bay is that you have to get lockers for your purses, cameras, bags, etc. There is no place to put them on the other side of the track like there are in some parks. I found that mildly annoying, especially when the locker code didn't work the first time and we had to get help, but that's because I'm impatient and just want to ride, ride, ride! In actuality, it's probably a lot safer to have your things in a locker so no one walks away with the things you really need or want for the day (like your car keys and money). ;) 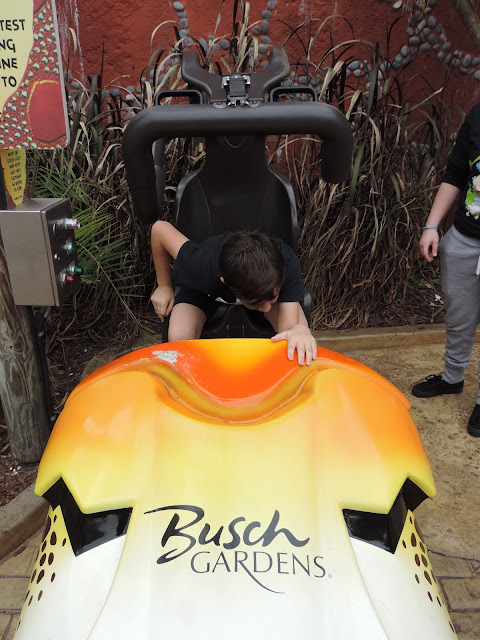 This guy...who has always been fearless when it comes to coasters, until our last Orlando visit (the Tower of Terror did him in, I think, because every since we rode it, he's hesitant or not wanting to go big when it comes to thrill rides) decided he was going to ride. No one was surprised, because like I said, he's always been fearless. Then he started to remember Orlando, lol, and got apprehensive. He tried out the model seat and got in line. We waited. And waited. And then finally it was our turn. We all got in our seats and I looked over and there were tears coming down his face. I asked the operator to let us off. It's not fun if you're crying!! We waited for the girls to finish riding... 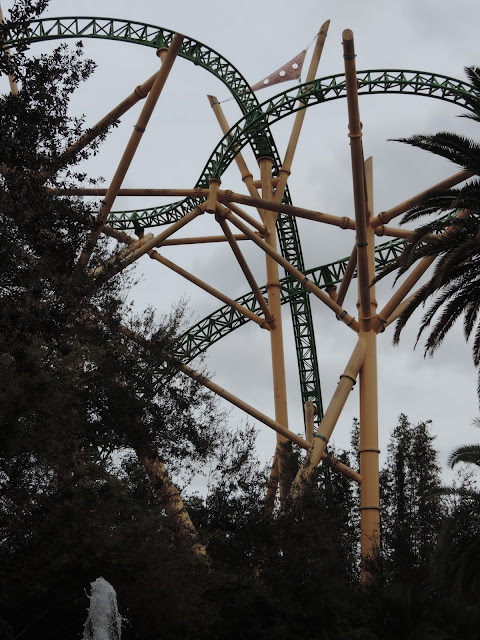 and then my 'fearless' one and I, went around to see the other attractions while the teen girls sought out the rest of the coasters in the park (and there were quite a few, all of which looked awesome). Did I miss riding? A little bit, but not much. I'd rather spend time with my little guy any day of the week, and definitely I'd rather he be enjoying himself rather than internally freaking out. He was worried his sister was going to freak out that he was 'chicken,' but she was definitely cool about it. ;) 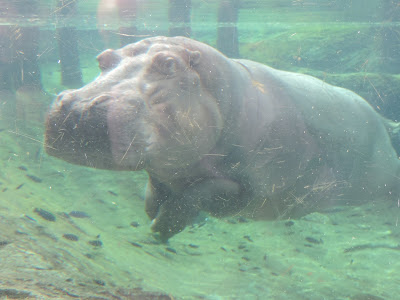 While the girls played on the big rides, we got to see some more of Busch Gardens' fascinating animals. Watching a hippopotamus swim is definitely a cool experience. 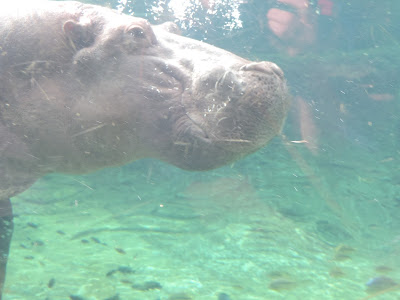 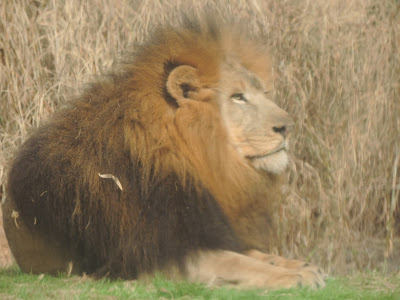 We saw some more big cats, including this glorious lion. Look at that mane! 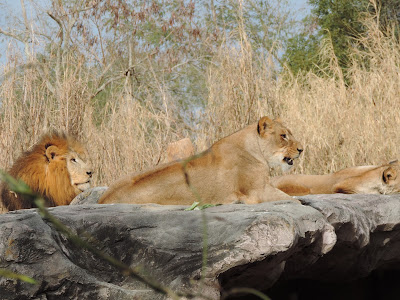 And his posse. They're so beautiful to see, that you forget for a second how dangerous they can be. Would you take a wild African Safari? I wouldn't, I'm too bawk bawk bawk chicken, so for me, this is as close as I'll likely ever get to these beautiful "kitties." 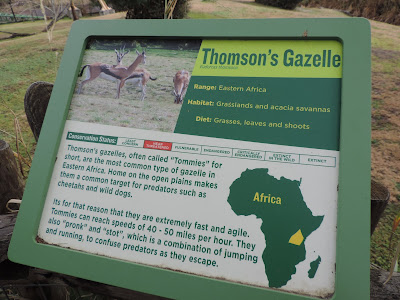 Busch Gardens houses over 300 species of animals, a lot of which we got to leisurely see, since the girls weren't rushing us along for rides. You know, I've always been of the former crowd wanting to hurry up and get in line to enjoy the coasters, but this was nice too, in a completely different way. We thoroughly enjoyed the park, and still didn't get to see all it had to offer after being there all day!! I'd love to go back and see the sloths (my daughter's favorite) and the hyenas (because I've never seen one except on Lion King). ;) They have an open safari ride you can take too. It does cost extra and lasts about 30 minutes. We didn't realize that when we were there. I should have researched better before we went! You can feed the giraffes on that ride, and I think that would be memorably cool. 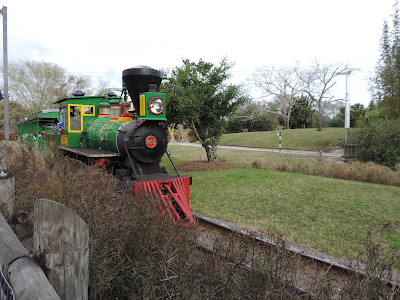 The steam train will take you from one side of the park to the other. There's something nostalgic about these and I know I've said it before, but I really like them. 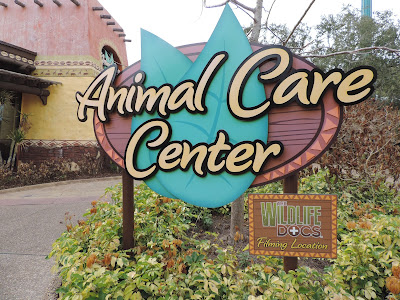 Evidently there's a very popular show called "Wildlife Docs," and apparently they film it at this Busch Gardens. I'm not sure if all of it, or part of it is filmed here, as I've never seen the show!! I think it's wonderful that they are a part of something like that though. I'm sure it adds to the amount of support they receive for the park, and when you're caring for animals, that's always a good thing. 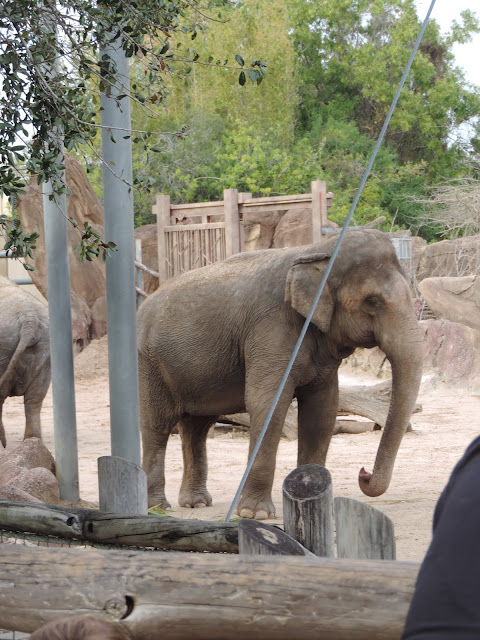 I like to see the elephants anywhere we go. They're just so huge, yet so graceful. I wonder if the grounds are kind of bare because of the sheer power and force they have/use just being elephants? I know we went elsewhere (on a different trip, not at Busch Gardens) and the grooves they'd put into even the tree bark was significant. There is an elephant interaction and husbandry wall here (awesome!), and just to note: these Asian Elephants are endangered. 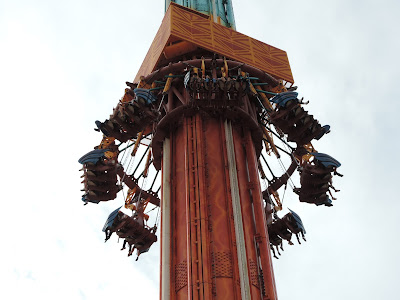 Falcon's Fury is a 335-foot freestanding drop tower that looked amazing. We didn't ride this (not sure if the ladies did when they went off on their own or not, I forgot to ask them). There was a smaller version in the kiddie area that they all rode together though. :) 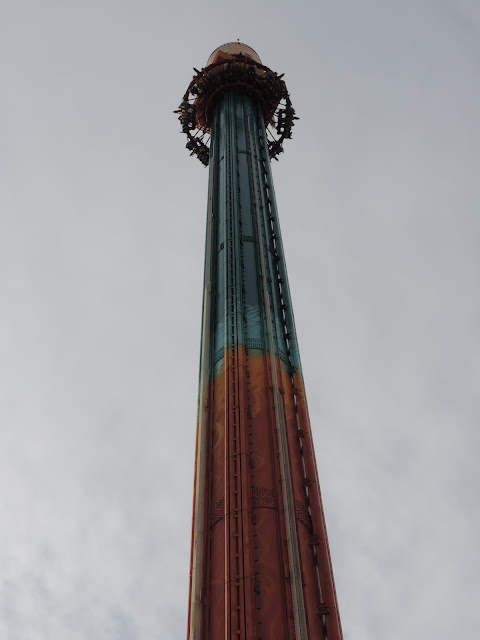 I'd have ridden this one, if given the opportunity. It was pretty intense looking, and dropped fast. Everyone came off laughing, so I'm sure it was fun. 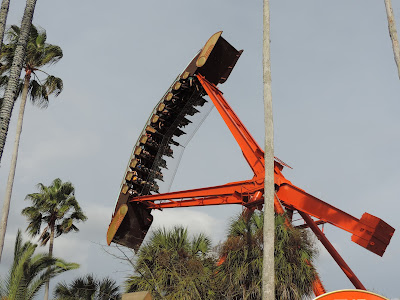 The Phoenix is an upside down ship ride. It literally swings riders to the top and over, where they are completely upside down. 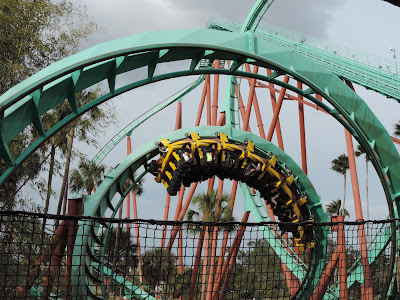 Steel coasters are my favorite, and this double loop ride was called Kumba. It's one of over a dozen rides to find while strolling around Busch Gardens. 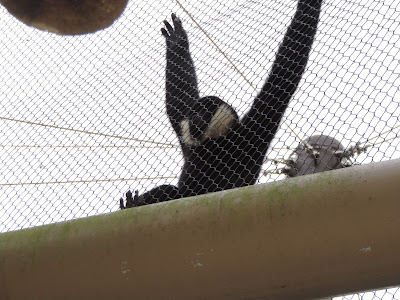 So what did we do while the girls roamed around to get their speed on? We played in kiddie land! There's one area where you can walk on rope nets and such, and just across from us, there is an area for monkeys to do the same. They can see you, and you can see them. It was cracking me up! 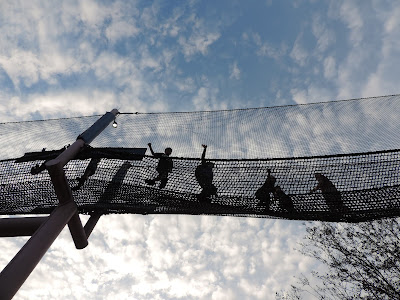 There were several places to walk on the nets. We'd passed this earlier in the day and everyone had participated, it was so fun my son wanted to go back, and so we did. 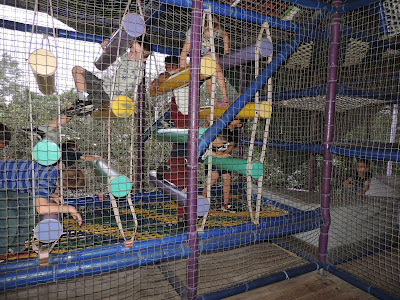 The nets took you to play areas if you wanted to join in. We stayed here quite awhile. My son had a really fun time exploring all of the areas, including the climbing mat rolls, the trampoline, the inclines/declines and more. Although there were a lot of kids there, it wasn't too crowded at any point. Parents could sit underneath and watch their kids, or they could climb through with them too. 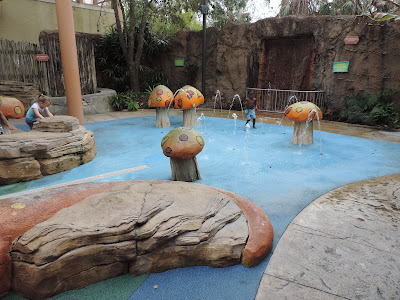 There are splash pads in this area. It seems like all of the parks have them now. I think it's a great addition, especially in the summer when it gets so hot outside. 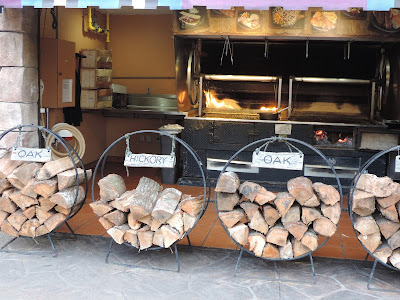 There were restaurants all around, so you were never too far from something to eat or drink. The restaurant we went to for lunch actually had some great salads and huge burgers (so good my son started to eat his in line before I paid for it, ugh). :) 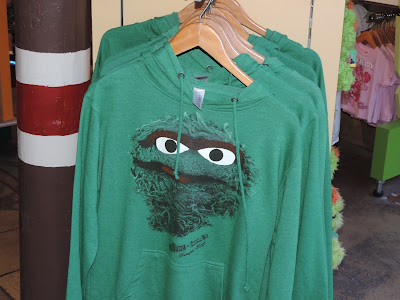 There was an area dedicated to Sesame Street, a favorite of all my children at one point. I still love it, so could have went in and had a fine time. They also had characters posing outside to take pictures with the kids. I saw Abby Cadabby out there. :) 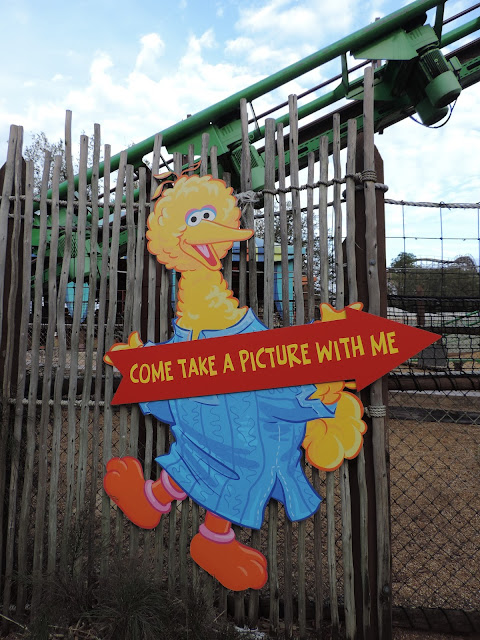 Sadly though, my son has now outgrown Sesame Street (sigh) so we moved along to the strategy zone where he wanted to try out the climbing ropes and the basketball game. 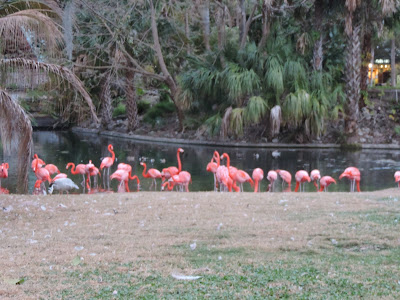 The scenery was great, and everywhere you turned a surprise would pop up, like this area we ran into with the gorgeous Pink Flamingos. We had a great time at Busch Gardens. It's definitely an all-day excursion. Stay for the fireworks at the end of the day, if you want (we didn't, but only because we were exhausted). Learn more by visiting the website (each CityPASS booklet has an admission ticket as well). You can also follow on Facebook, Twitter and/or Instagram.
on February 25, 2018