Brick Fest Live is on Tour Now! PLUS $3 OFF Coupon! 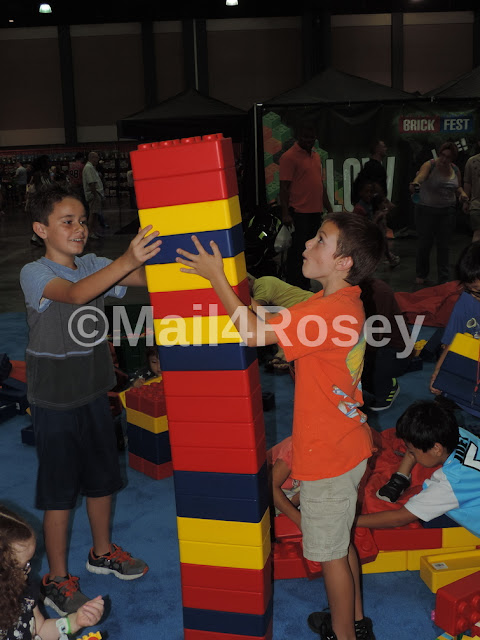 I love this picture. It depicts our whole day. I took my son, his friend, my granddaughter and her mama to the Brick Fest at the West Palm Beach Convention Center.  It was an awesome day for all of us, and the boys as you can see...really liked the oversized foam bricks! 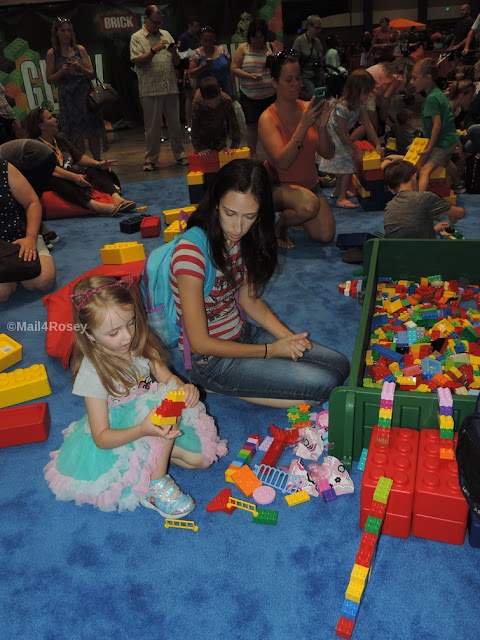 My granddaughter preferred the Duplos. Those stairs you see are her own personal creation, and she was super dee duper proud of them too. The little slips of fabric you see on the ground are actually capes her mom made for her little unicorns (from My Little Pony, I think) and the steps allowed her little friends to get up to and into the pool of DUPLOS. Good times. ;) 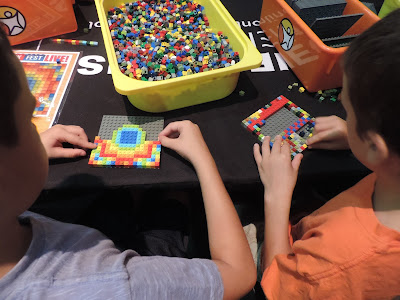 The boys used templates to make their own creations, out of the regular-sized building bricks They had Minecraft templates, and I was surprised my son didn't use one of those, but the colorful target he made was nice. 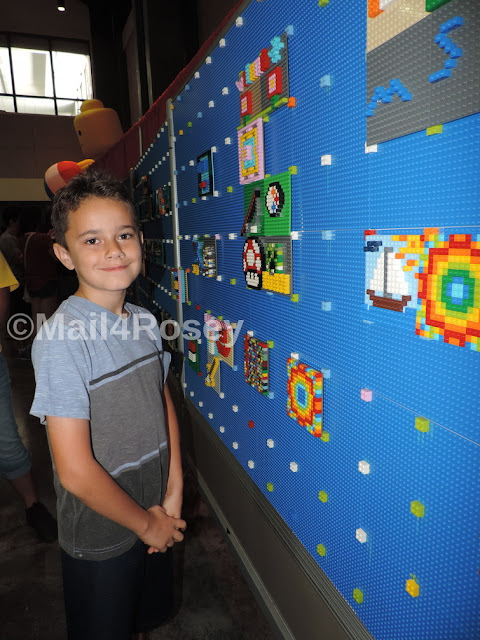 There was a LEGO wall for them to showcase their creations when they completed them. 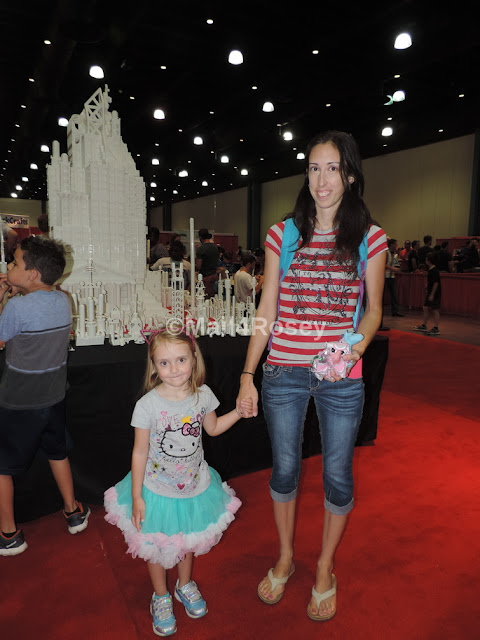 The big white structure you see behind the ladies was already in place when the event opened. There were bins of white bricks all around it though, so you could build things and place them around the perimeter. 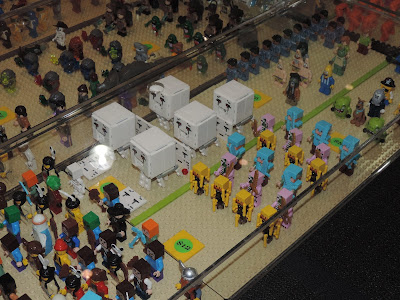 Lots of mini figures were for sale too, and those are my son's favorite right now. A lot of the ones they had on display were unique to me. You could custom make your own to buy at some of the stations. We didn't but any, but I did wait in line for about 15 minutes to purchase a Christmas ornament. The line, however, didn't move. When you have kids in a room full of fun things to do, it's hard to contain them, so I left without one. Bummer, but that's okay. We have an ornament book (how to make Christmas Ornaments out of LEGOS), so if I want to badly enough, I can make my own later. 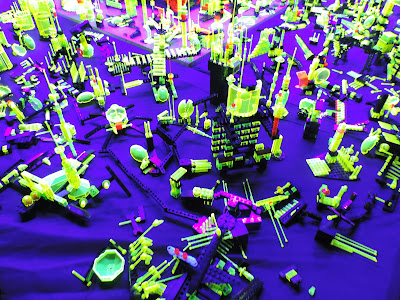 The tent with the Glow Bricks inside was my favorite. I haven't seen these in stores, but I'd sure like to get a set for the house. The glow they give off is fan-tas-tic! 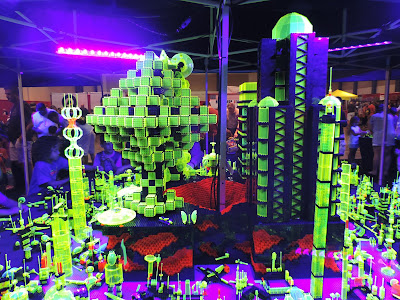 They had items both big and small on display. I didn't see any for sale though (maybe I just missed them?). 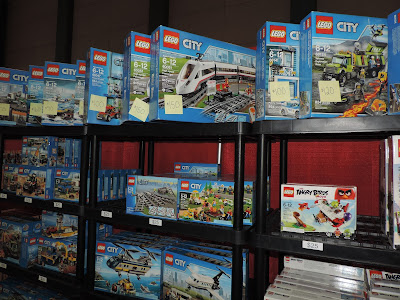 They did have a lot of traditional sets for sale though, and almost everyone had a bag, so I'm guessing sales were going through the roof. 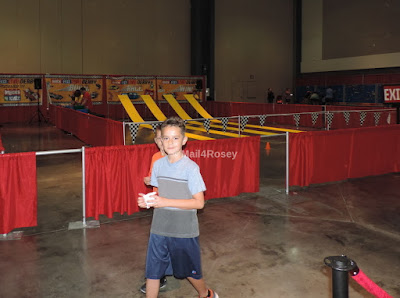 Behind the boys here is a race track. This is where people lined up to pit their creations against one another to see whose ride would travel the fastest. My son loves to do this at Disney Springs, so he was geeked to see the racetracks set up here. 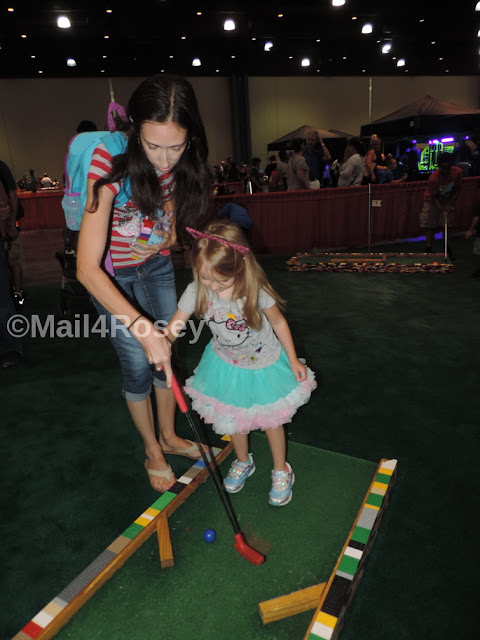 All of us tried our hand at mini golf. It was my granddaughter's skill that trumped us all though. She was getting a hole every two tries. It wouldn't surprise me at all if she was getting holes in one in no time at all with a little practice. Future professional golfer in our midst? Perhaps. :) 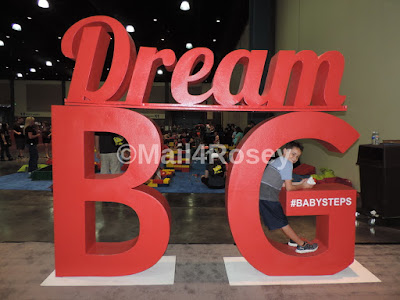 Brick Fest Live was an awesome place to build, buy and dream. I highly recommend attending an event. The tour is running now! Learn more by Googling to see if they are coming to a neighborhood near you. It is a fun day that's absolutely worth taking the time out to do. 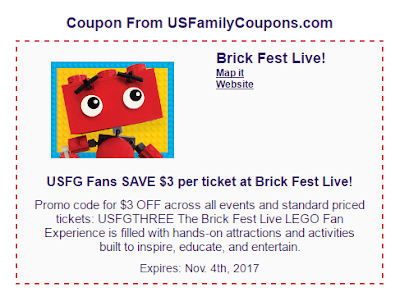 Mail4Rosey Readers Get $3 Off Each Ticket
They Purchase by Clicking Here!
on May 29, 2017