You have GOT to See This Place! Summer Fun at Tree Trek Adventure Park in Orlando

Before I tell you about our day at Tree Trek Adventure Park in Orlando, let me just note that this would be THE perfect place to have a birthday party for children or adults!! It's a one-of-a-kind day that everyone will remember, enjoy, and talk about for a long time to come.

We were heading up to Orlando for my birthday weekend. Not a party per se, but just a fun little something to do. We went to a show, we went to Disney Springs (formerly Downtown Disney) and we went to Tree Trek Adventure Park!

We went first thing in the morning, and if you know Florida, you understand why. You spend a few hours in the park, so you want to beat the heat (and this time of year, beat the rain too, though they do climb rain or shine).

There are multiple courses for kids, juniors and adults. They get progressively more difficult as you go. You can opt to stop any time you would like. I even saw one person stop mid-course. He was a little apprehensive about walking on the ropes. The guide was amazing with him. She helped him down and asked him if he  had a good time going the first course. She made him feel like it was no big deal, and didn't make him feel more uncomfortable or embarrassed (good job to the guide!).


After they harness you and everyone in the group going out shows up, they put you through a mini training session. They show you the safety features (both clips will never be opened at the same time) and how to use and maneuver with your equipment. It takes a couple of tries to get it down pat, but in no time at all, you'll be a master!


They also put you on a mini zipline (there are more to come) while they watch and guide you. The smile you see in that picture was instant and genuine. 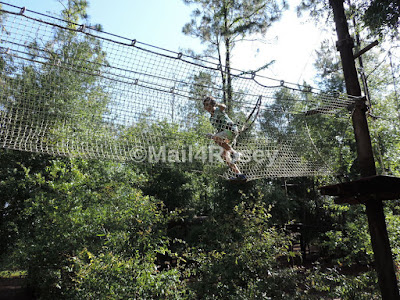 There are some similarities between the kids and the adult courses (the two we tried), of course the adult version puts you up much higher. Both courses has one of these nets to run across. 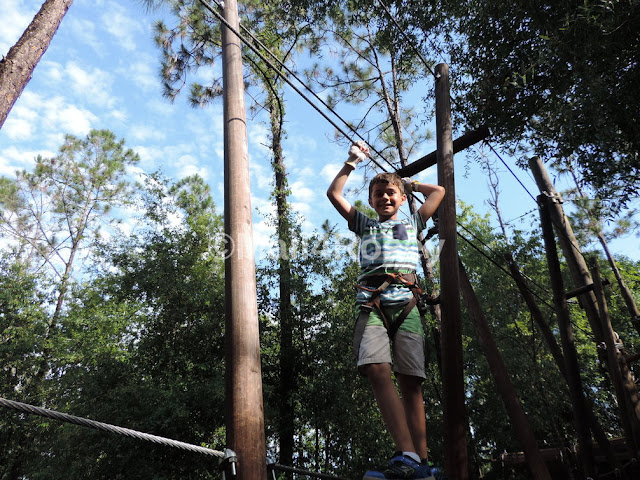 The courses my son ran were designed for children aged 7-11. My son went through both of them and did all 21 adventures. He had a blast! It was just the right amount of challenging-yet doable, and these courses definitely had a huge cool factor going on. 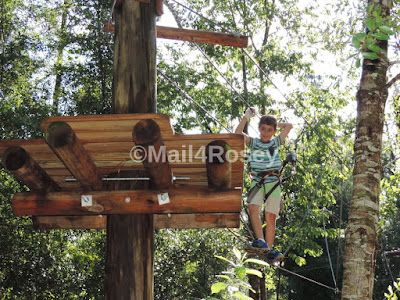 At the end of each game there was a platform to stand on, catch your breath, wait for friends (if friends were there too), and take in the scenery. As I noted above, each task got a little harder as you went. You can see though, that even at that, they weren't too awful challenging for the younger crowd. 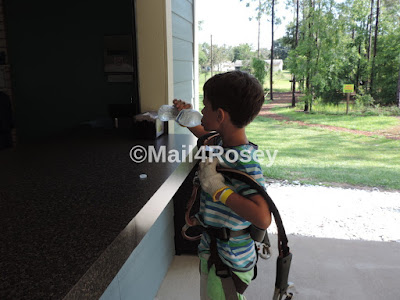 See the gloves he has on? You buy those for a minimal fee when you go in. Make sure you get them, they'll be soaked by the end of the course and they are worth their weight in gold. The bottles of water were unlimited, ice cold and free (extra nice, and essential to keep you hydrated). 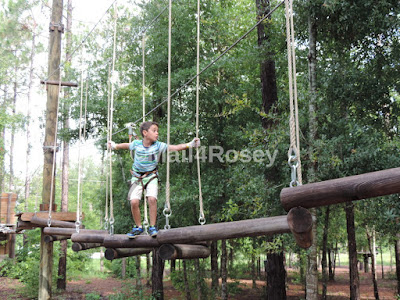 After little man got a drink, it was back to the course for round two. You climb a rock wall to get to this course, so it's fun right from the get-go. My son has climbed a good number of rock walls in his day, but never with harness gear on, so he got tangled going up. Right away someone noticed and was spot on up there faster than you could say, 'he's a little tangled.' He got him situated fairly quickly (he climbed up to him so he wouldn't be scared, I think) and going again on his merry way.  And that was the way of it! The guides and others working there left you pretty much to your own devices while you were there, but they were instantly available if something happened. In fact, they would often times be there before you even knew you needed them. 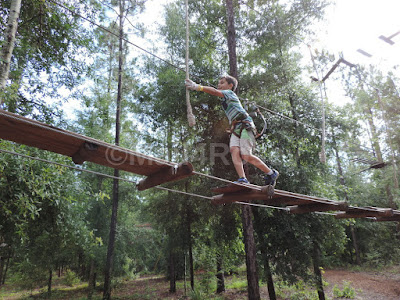 The Tarzan ropes were fun to swing on and by this point my almost-chicken fella (at the beginning) was getting downright cocky. ;) 'Hey Mom, Watch!' and things like that... :) 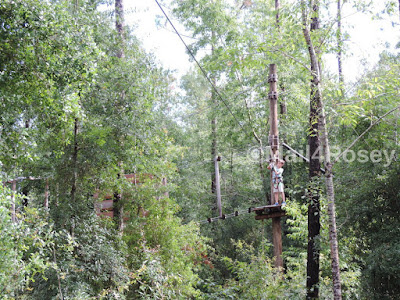 And there he goes on the final zipline of the day, almost to the end of his second and final course (juniors and adults get to go to the giant zipline, but he's still not tall enough for that one yet). He had a such an amazing time up there in the trees!

Then we went over to the adult side of the course. Again the guide shows each person in the group how to use the equipment and you get a test run on the mini equipment. Then you're off on your own (with the guides never really far away). 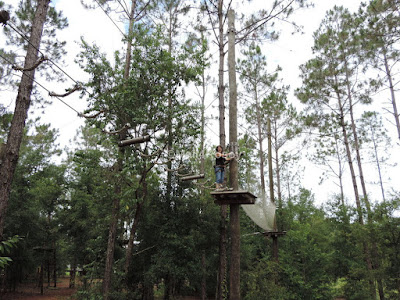 You can see from this picture that the adult course is a lot higher in the air, even the very first one that is the least physically taxing. 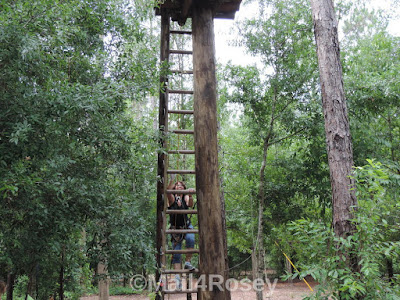 At all times you are harnessed though, and safety precautions are in place. You always feel safe, which makes it easy to enjoy the courses and have a good time. 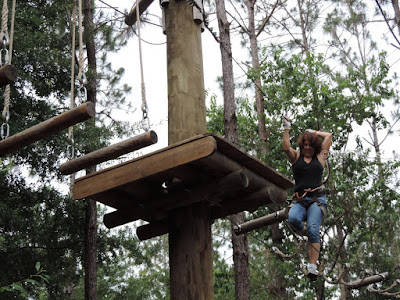 Each of the four adult courses gets more challenging as you go. Believe you me, it starts off pretty easy, but it doesn't stay that way. ;)  That's part of the fun. You just do what you're comfortable with, and then watch the others in your party progress to the tougher courses as they go (there's a walking trail underneath every course, including the children's). Or if you're really, really bad to the bone...you can go ahead and do them all. :) 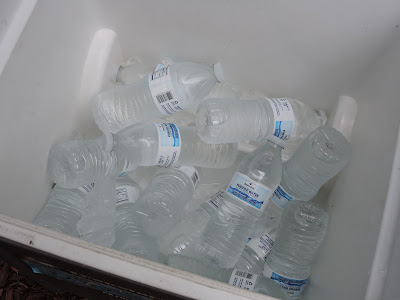 Bottles of ice water were in coolers all along the challenge routes. They were cold, refreshing and very welcome (whether you were climbing or watching)! 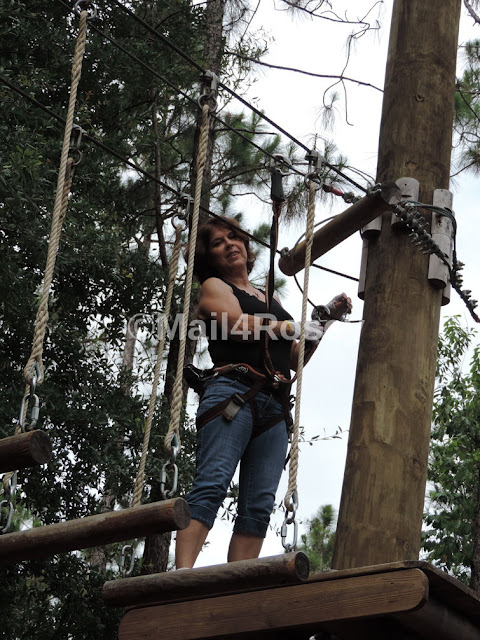 For the adults there are four color-coded challenge courses. Things like the trapeze swings to walk on were there... 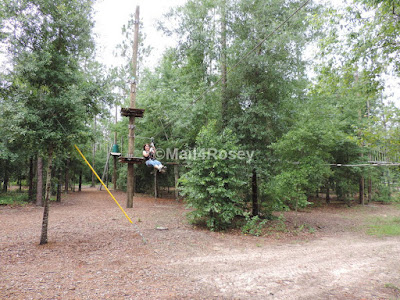 and of course the multiple ziplines. 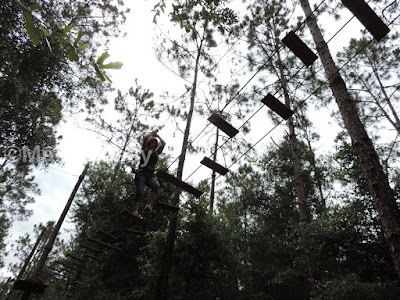 It really did get more and more difficult as you went. 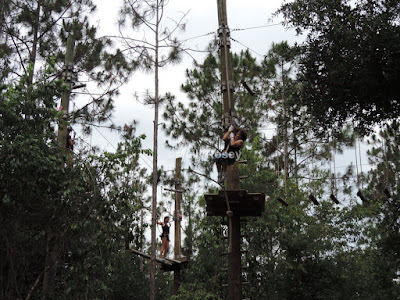 I could have done the first course with ease, I think. But when you got to one point, this point you see in the above and below pictures, you would have lost me. There's Aunt B. coming off of the platform swinging on a big rope ball... 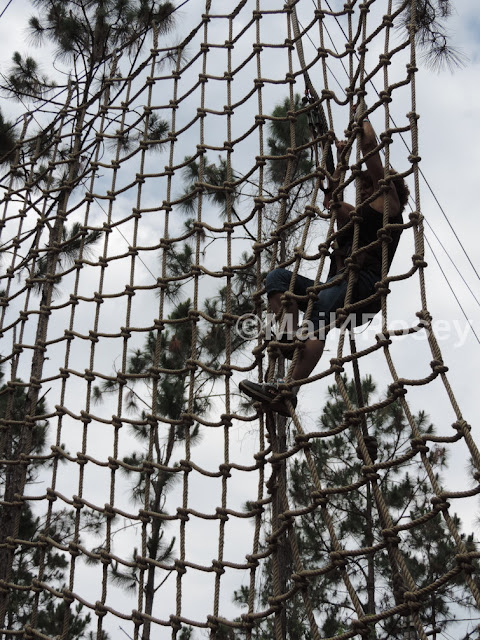 into a net!! She was like Spider Woman on steroids! When she started out I was thinking where's the platform to land?????  Then I figured it out, hahahaha. She had to climb that rope all harnessed up and get back to another platform to finish that route. And she did, like a champ! 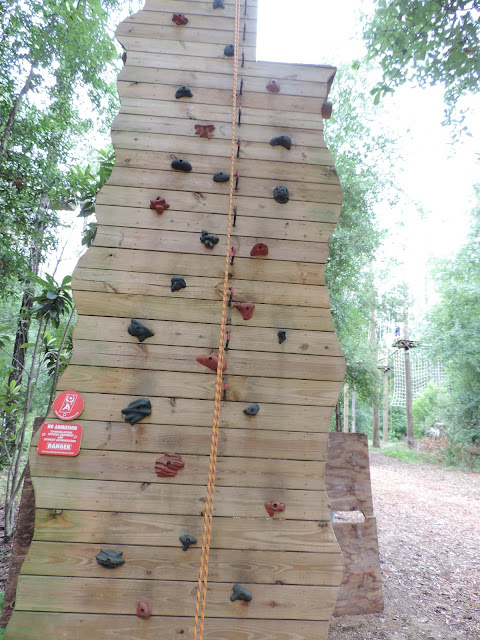 It was getting hot as the day wore on, and we were all getting tired. When we got to the red section, we decided that instead of climbing the rock wall to progress, we'd call it a day...almost. There was still one thing left to do. 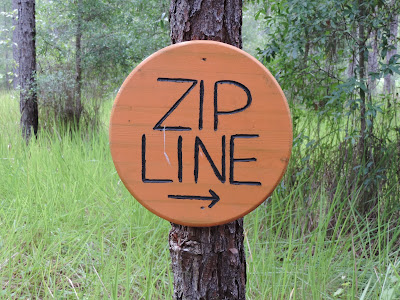 
At the very end of the course, you climb a lot of stairs to get to the top, and then you take your zip. What a great way to cool down after a such a strenuous workout! It is the longest zipline I have ever seen, and it does go very fast. My son tried to race her by running on the walking path, of course he was exhausted by the time he got to the end, where she had been with me, patiently waiting for him to catch up. ;)

It was definitely a day to remember and we had such an awesome, fun time!!

There are picnic tables under shelter, and alone in the grass for those wishing to host parties or events. There is also a snack/drink bar on the covered patio and they have outside, air-conditioned rest rooms. The staff are as kind and helpful as can be, and they really know what they're doing too.
The next time you're in the fun zone (that's what we call Orlando because there's so much to do there!) be sure to swing by Tree Trek Adventure Park (pun not intended ;) ). You'll be oh so glad you did!! THIS is how summer memories are made. :)