May the Fourth Be With You #StarWars #PlayLikeHasbro


Today is May 4th, and it is also Star Wars Day! I know a lot of people are celebrating in different ways. We're running our celebration over here by breaking out an Episode VII NERF First Order Stormtrooper Blaster.

What better way to embrace the love of Star wars than by doing so in a friendy game of, "Run! He's got a NERF!" No, that's not really the name of a game, but it's invariably what we all say when someone taps into my son's arsenal. Let the record show: My youngest son takes his NERF collection very seriously. :) 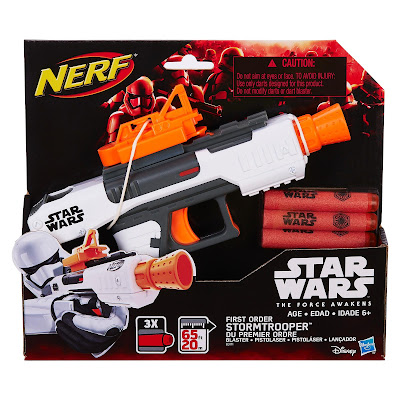 The First Order Stormtrooper Blaster is a front-load, single shot blaster with a spring pull back to load it. This is the latest gun my son has added to his collection and it's standard NERF quality, which in a word, means 'excellent.' Included is the blaster itself, three darts and the instructions. It also has a sight on top of the tactical rail that you can use on other NERFs you might own.

In addition to the Star Wars logo being on the blaster, it is also printed on each of the foam darts.

Here you see my youngest son apprehensively posing for a picture with his big bro. He knows it's only a matter of moments before he's under attack. The struggle to hold still and smile, is real. That is especially true when a 'he-he-he' warning is emitting from his brother's lips. ;)