Disclosure: I participated in a campaign on behalf of Influence Central for The Salvation Army. I received a promotional item as a thank you for participating.

As a little girl, every holiday season, my mother would carefully take a couple of dollars out of her purse, a purse that had a little two-ball closure on top that snapped. I knew when she pulled me to the side, and undid that purse snap, that we were going to donate to the Salvation Army Red Kettle, or the 'bell ringers' (those manning the kettle) as I called them when I was a child.

The bell ringing made me feel happy, and Christmas-y. After all, Santa's reindeer had those bells, right?  She would fold those bills carefully and put them in my little hand. I can still remember the feel of her transferring those bills into my gloved hand (and in Ohio, in December, outside...hands were always gloved). Even though I only had a few steps to go from her to the kettle, I remember how I kept looking down at my hand to ensure I didn't drop those bills. To me, it was a big deal. Then I would drop the money in, it would all be over, and we'd be on our merry way in seconds...the 'bell ringer' instantly all but forgotten.

What I didn't know as a child, is that those donations were being given to help others who really needed it during the holiday season. As I grew older, and developed a heart for giving, those donations took on a deeper meaning. I realized there were people behind the scenes that we would never meet or talk to, but who needed the helping hand of a stranger. 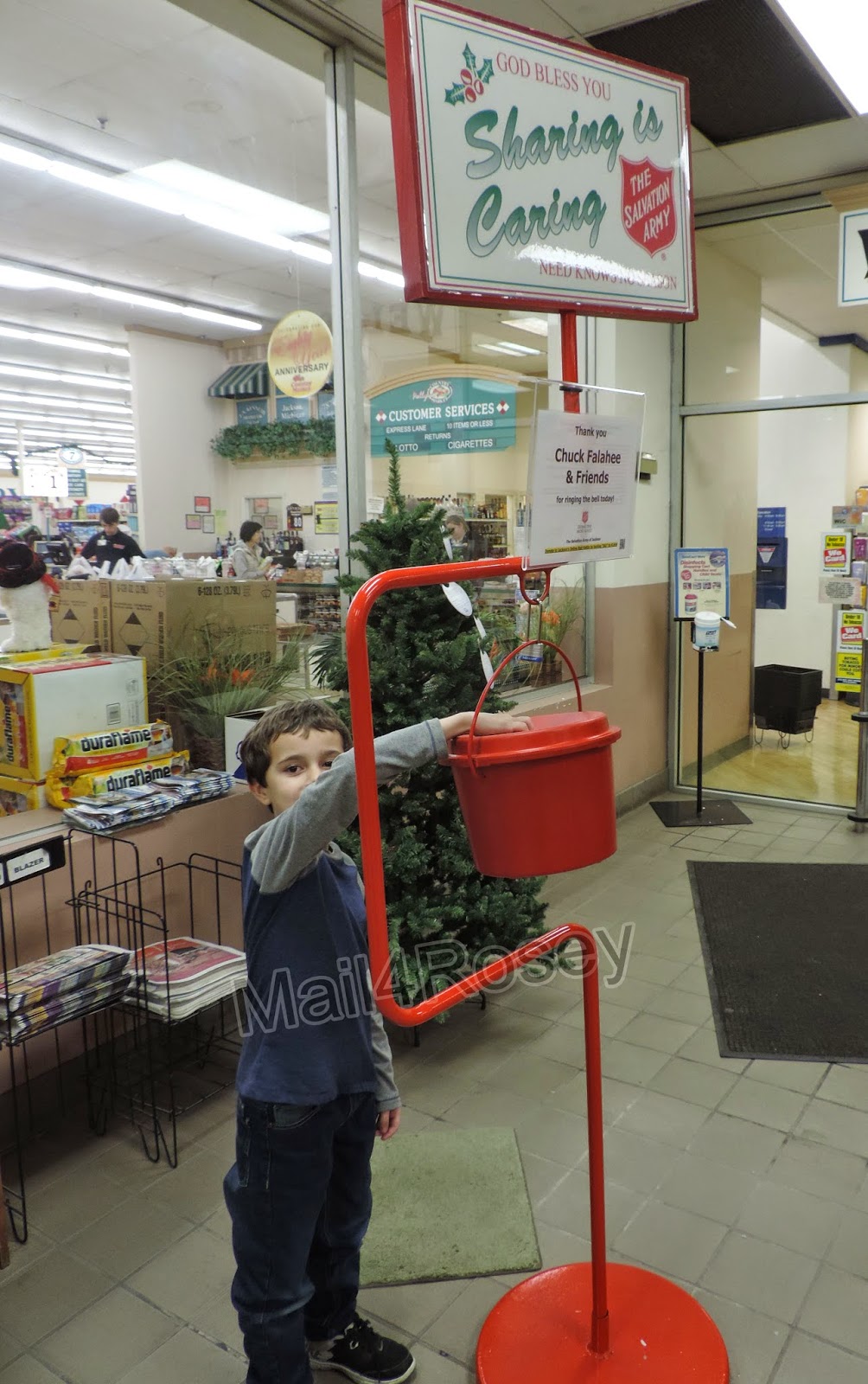 Today, I've passed the tradition of giving on to my own children. While I don't have a double ball-snap purse, and the kettle at the store pictured above was inside (hurrah for staying out of the elements!), it's still a big deal to my youngest to drop money in the kettle. I wonder if the clanging bell makes him feel holiday-y and festive like it did for me? I bet it does. And since the Salvation Army has been around since 1865, there's a very good chance, he will someday be taking his child/ren up to the kettle as well. That's fine by me. I think it's a tradition well worth keeping around. Don't you?


The Salvation Army Doing the Most Good

The Salvation Army began in London, and twenty years later made its way to the United States. So for 150 years internationally, and 130 years local-to-me, the Salvation Army has been giving people a hand-up. Whether that hand-up takes place in the form of gifts, paid utilities, a hot meal or countless other ways, the altruistic nature of their assistance certainly deserves to be lauded.


Just a Few of Many Ways the Salvation Army is Helping

• In 2013, The Salvation Army’s 3,600 officers, 59,000 employees and 3.4 million volunteers served nearly 30 million Americans in need. That’s almost one person, every second, every day.
• The Salvation Army’s faith-based mission calls it to meet human needs in His name without discrimination, regardless of gender, race, sexual orientation, physical disability, age, creed or religion.
• The Army has nearly 7,600 centers of operation covering nearly every zip code in the country.
• We also have a worldwide presence, providing assistance to people in more than 120 countries and territories around the world. The Salvation Army serves millions of people through dozens of services directly targeting the needs of local communities – from homelessness to disaster relief to substance abuse rehabilitation.
• Through the public’s generosity in 2013, in the United States alone:
o The Salvation Army served more than 58 million meals to the needy.
o 204,000 people received rehabilitation services through donations to Family Stores.
o Over 203,000 underprivileged children attended day care and summer day camps.
o The Army provided nearly 10 million nights of shelter.
o 324,000 people received help during times of disaster.
o More than 4 million families and children were served during the holidays.
o More than 1.8 million people received help through senior, medical and institutional services.

That's just a small list of the ways the Salvation Army has helped, does help, & will continue to help those in need. It gives you even more reason to want to drop a few dollars in the red kettle when you're passing by, doesn't it?

Note: One-third of online donations occur during the last two days of the year. Donors can benefit when it comes to their taxes if they donate to a charity and receive the proper documentation before January 1.

The Salvation Army’s 124th National Red Kettle campaign is encouraging Americans to share their reasons for giving using the #RedKettleReason hashtag. Donors who post using #RedKettleReason can view their posts and others on RedKettleReason.org and learn why the rest of America is giving. Visit RED KETTLE REASON to learn more!