A couple of days ago I posted about our mini-trip over the long holiday weekend to Frankenmuth.  Here is the rest of that post...our hotel visit.

We have been to Frankenmuth many times.  It's just really a place our whole family enjoys.  They have a premium outlet mall close by at Birch Run for shopping enthusiasts, many great shops right in town including two shopping centers (many with custom-made items), and an awesome Cheese Haus that my husband favors above all else.  They also have restaurants aplenty.  The two most popular restaurants by far, for us, are the The Bavarian Inn and Zehnders, both of which offer a unique Bavarian-style experience, right down to what the staff are wearing.  Frankenmuth also has a great coffee house with a play area for the kids built into the wall (under the staircase), and of course they have Bronner's, the worlds' largest Christmas store.  I'm missing a lot, but you get the idea.

We usually stay at the same hotel, and do the same things, but we decided to switch it up a bit this time, and after a little research, we opted for a stay at The Bavarian Inn, more precisely, we decided to stay in the Family Fun Center of the hotel (which is like a hotel within the hotel!).

If have children (any age!), and are headed to Frankenmuth, I highly recommend asking for a room in the Fun Center.  The rooms are literally in the middle of a fun zone, but are down a hallway with sound proof glass separating them from the fun (so you can look down and see the rooms, but you're not bothered by the noise).  When I was reading about it, I thought, 'fun center, okay,' but I had no idea what we were in store for once we arrived.  Just like the website described it, this place really was a mega-arcade and Bavarian-themed indoor water park. 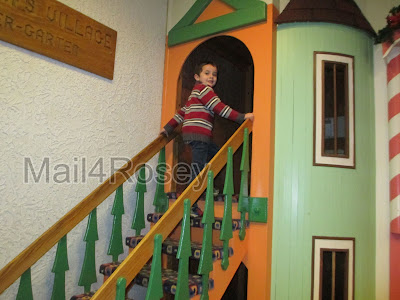 The first thing we did was test the play rooms.  In the picture above you can see this was no ordinary game room.  There was a large play house area (complete with a play kitchen inside, of course), that my little one could not pass up. 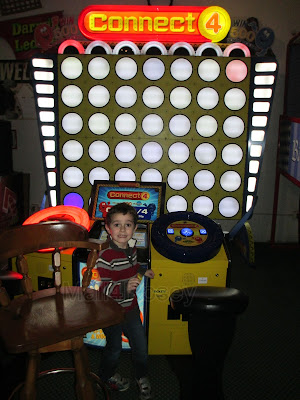 Then we ventured into the two big game rooms to see what they had.  A test site for video games before they hit the market even, this place was huge!  In the picture above my son is about to test out the wall-sized (tried and true) Connect Four game. 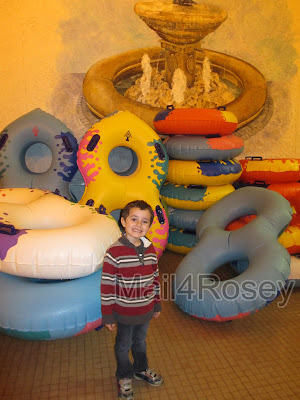 Decked out with four swimming pools, including one with a Lazy River; one with a double slide featuring either a bullet bowl or a Tower Twister body slide; one (next to the 18-hole mini golf course) that had a 15ft. tall waterfall; and one that was for adults only.  And one of those was a pool that had big water guns mounted on the side of it.  Of course we had to go check a couple of them out (they are located in all different areas, so we only went to two). 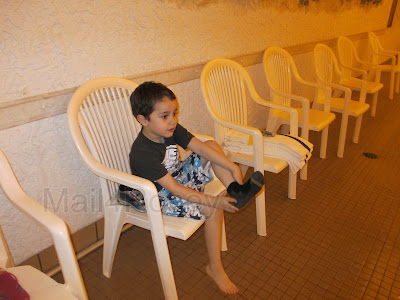 Once you check out a swimming pool, if you have a child along, the next thing you are doing is going into the swimming pool, lol.  By this time, we'd already lost 'grandpa' who went to take a nap, and 'grandma' and 'dad' who were getting their Vegas on, on the play floor (seriously they had as much fun as any child there). 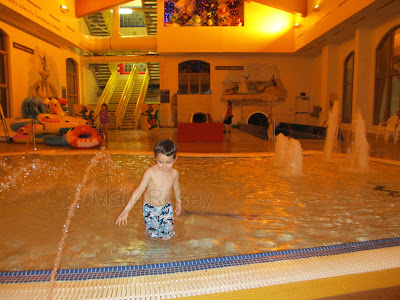 I put this picture up so you can see the two holes in the wall behind the kiddie area.  That's where the big kids or grown ups go to slide down the dual slides.  You can't really tell in the picture, but up high it is decorated for Christmas (everything in every part of the hotel was nicely done up for the holiday). 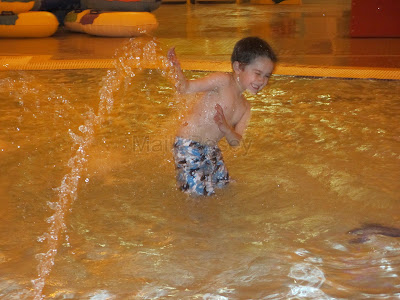 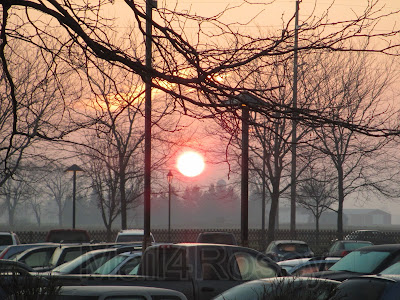 An early riser, I woke up before anyone else the next morning and whispered to little man to see if he wanted to come along with me to further explore the hotel.  He was up like a flash.  The Fun Center wasn't open yet, so we ventured about the massively-sized hotel to see what we could find.  We did a little shopping (a couple of postcards and a lot of browsing), and ate breakfast at one of the restaurants.  It was still pretty early, so we walked outside and watched the sun come up.  You can see from the picture above that despite it being a holiday (or maybe because it was a holiday), the hotel was super crowded, and the huge parking lot did not have a decent spot to be found if you happened in late. 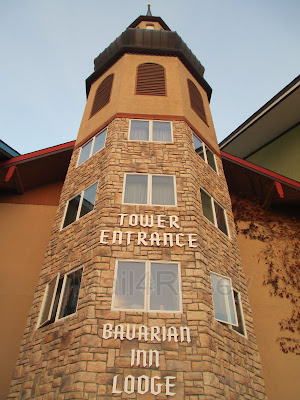 The outside of the entryway. 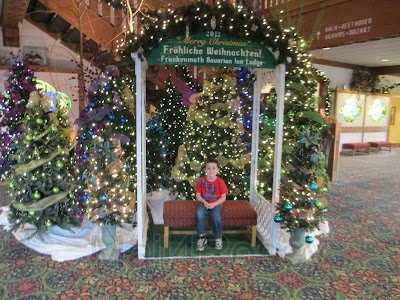 In the hotel we found a display thick with Christmas trees that was really pretty, and then we went up a beautiful staircase to find some more. 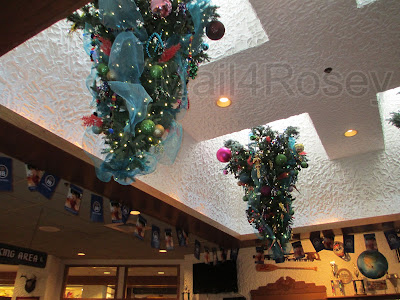 Hanging your Christmas Trees UPSIDE DOWN is an old German tradition that the hotel practices freely (as do the merchants in the town).  There were upside down trees everywhere we went, large and small.  I have no idea how they stayed put without losing their decorations.  There must have been a lot of tie-down going on at some point.  It was nice though, and added to the authenticity of the hotel/town theme. 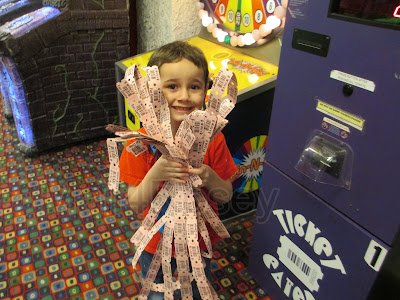 Finally, The Fun Center opened and we were in business.  Little man won a slew of tickets and changed them in for a light-up sword, a Chinese hat, winter gloves (a practical choice that made me laugh), and some littler things too.  Usually when you go to a game center you get the pick of the teensiest toys with your tickets. Not at the Bavarian Inn Fun Center.  We had the pick of the litter, so to speak, and could have gotten a big stuffed animal (you know, the ones that hang from the ceiling) if we'd have played any longer. 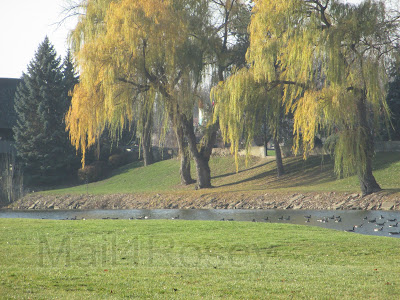 Then it was time to go back to the room.  The view from the back door of our hotel was overlooking The Cass River, which looks narrow in this picture, but it was just the angle.  In the summer Ferry Boat rides are given up and down the river, which I think is really nice.  Look at all the ducks that were out there that morning (and I love those trees!).

So, I got little man in a shirt more appropriate for dinner (it was a reservations-only Thanksgiving buffet, so I didn't put him in anything fancy, but thought I'd better take him out of his SpiderMan shirt).  My in-laws were just waking up, and my husband had gone out looking for us, but gave up and went to the Jacuzzi (I wonder how much looking he really did, lol).  So I thought it'd be fun to go explore outside a bit. 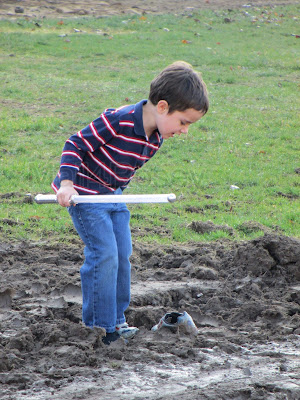 At one point in the grass was a strip thick with mud, "Don't go in the..." I didn't even get the sentence finished before little man was saying, rather loudly, 'Oh no!' He started off with two shoes, and ended up with only one because the other was stuck in the mud (without him in it).

Of course that required clean up, and as soon as I stopped laughing and we started running back towards our room, I saw that grandpa had come outside with a cup of coffee and he was laughing too.  He'd seen the whole thing.

I thought cleaning the shoes would be no problem, but my son really did it up good...those shoes were a mess.  I cleaned the mud off, but I couldn't do it without getting the insides wet.  That meant a trip to one of the gift stores, where I picked up a pair of poolside shoes (almost like flip-flops)...and that's what my son wore to dinner.  While I could have lived without him wearing flip-flops to Thanksgiving dinner, he couldn't have been more thrilled.  He's never had that type of shoe, so he thought it was better than the gravy we were served at dinner.

After we ate, we went to the one shopping center that was open on Thanksgiving and then we headed home (us to our home to catch up on what needed done, and my in-laws back to their home so they could gear up for Black Friday shopping later that night).  It was a fun little side trip, and the hotel is one I would recommend to anyone who happens into the area.  For those with children, it's a five-star gig all the way around.