Didn't it come and go fast this year?? But it was fun!

I already blogged about making Fall projects, the two pumpkin patches we visited, the Fall Festival at the school, my first time tasting the infamous Starbucks pumpkin latte everyone raves about, my little one catching a ride from his big brother in the leaves (love that picture!), and mine and hubby's anniversary, among other things.

To say goodbye to the month, I thought it only appropriate to post about our pumpkin carving and trick-or-treating. After all you only get to do it once a year!

We did trick-or-treating twice.  Once at the school, where there was also a classroom party & little man dressed up as a doctor, and once trunk-or-treating at our church...where little man dressed up like a ninja.  It was so cold (snowed a little the day before) that they moved the latter to the inside (yay!).  Being inside may seem inauthentic to some, and yep, that crossed my mind too, but baby it was cold outside, so I said bring on the heat! Plus we only had little man along this time, and he's not old enough to care where he gets to have fun, just so long as he gets to have it.  :)

On to the pumpkin carving... every year we all get big pumpkins and make some cool (or at least cool to us) carving creations.  This year, we went easy..and it wasn't intentional, that's just how it turned out.  Hubby and little man got HUGE pumpkins, and I got a little one. 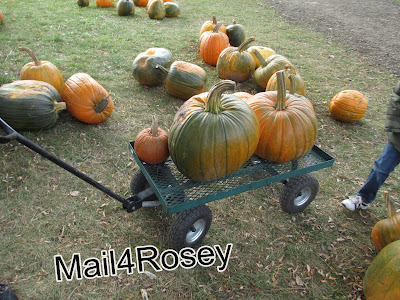 I got the little one on purpose because I was going to make this cute little spider pumpkin I found on Theresa's Mixed Nuts.  I even bought the spray paint, googly eyes, pipe cleaners, glue gun & glue sticks...and little man and I were excited about making the little guy (he is super cute).  But when it got around to paint time, the can I'd selected (in the craft section so I didn't even think to check it) had all kinds of warnings about harmful vapors, ill effects on the brain and/or nervous system, and extreme flammability (I'm thinking WHOOSH when the pumpkins next to it are lit, lol).  And since it was so far along in the season by that time, I cheated and used Captain America push-ins that I found at Target.  Next year I intend to get the right paint and make the little spider.  Maybe I'll even make a spider family.  ;)

Little man's pumpkin (the big one from the pumpkin patch) turned out to have a big spoiled spot (I'll spare you the rest of that story, ugh), so he ended up using the cute little pumpkin he'd painted at his school party for our display.

And hubby went simple this year too, carving that dreadful 'M' on his pumpkin to further rub in the affiliation he now has with the school that is a direct rival to my Alma mater. 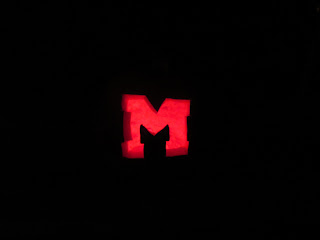 But it was all in good fun, and even though we went simple this year with the pumpkin carving, we still had fun.

And now it's time to move on to November, the month  we take care to be thankful.  I am always thankful for each of my four super awesome, wonderful, smart, kind children (and my daughter-in-law who is all of those things too!), but right this second, I'm thankful that at least one of my kiddos is still young enough to enjoy the little things that make the holiday fun for us.