What We are Doing Outside Today 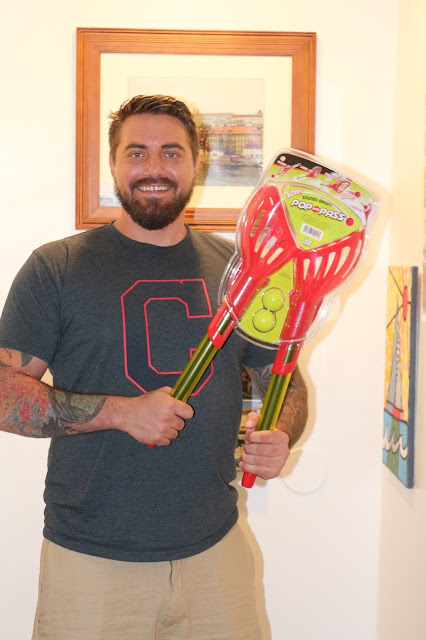 With our family taking extra care to isolate for so long, we have decided to start visiting again, here and there, and believe me, it's nice!! Not being one to complain about having to stay home (I love it!), even I have gotten a bit stir crazy here and there. On a recent visit with my son and his little one, we decided to break out some outdoor toys as well (yeah, we were getting crazy over here!). The Pop-and-Pass toy from Hog Wild that you see above was the kids' favorite. And I have to admit it was kind of unique and very entertaining. 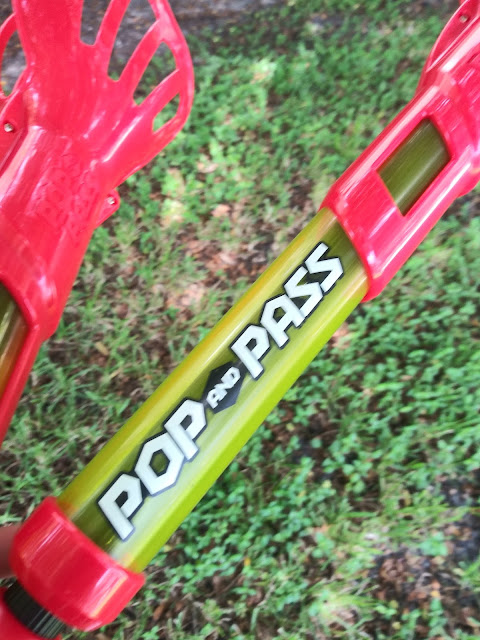 These Pop and Pass handles pump up and down and the air propels the little ball (included) into the air. 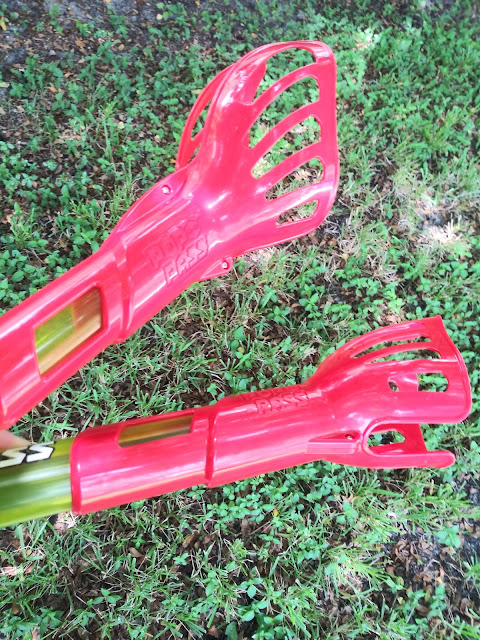 The objective is for the other person to catch the carefully aimed and popped pass into the cup of their part of the toy. The best part, or at least to me, was the pop (I loved the noise it made when it was ready to go). It is a fun little noise based just on the air that pushes the ball up and out (no batteries required). The kids thought lining themselves up to catch the ball was the best part (yeah, that was okay too, hahaha, kidding, of course it was awesome!). You can put it on the ground and scoop for an easier way to play, if you have really little children joining in on the fun. 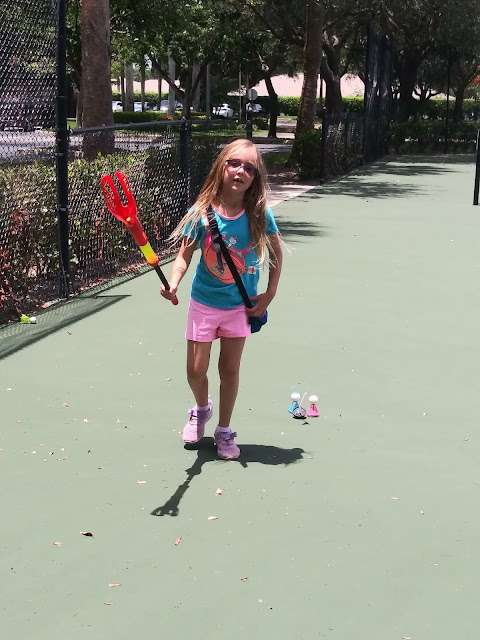 We started off on the ground, but the ball rolled way too far, too fast if you missed it, so we went into the grass. 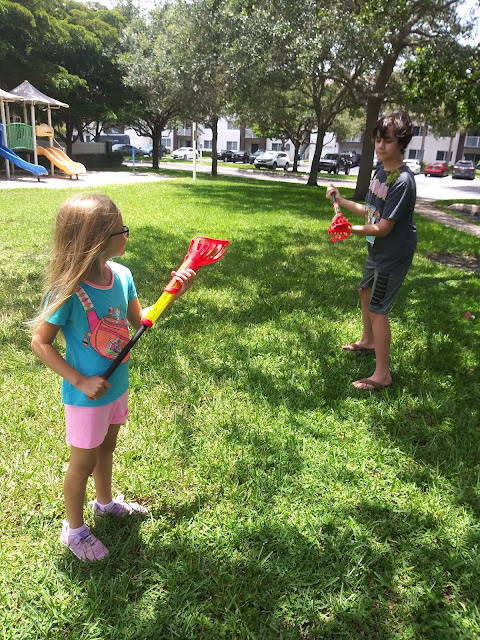 This was a much better strategy for the Pop and Pass game, and once we figured out the best distance to stand apart for optimum chance of actually catching the ball, it was game on! This is one of those games that once you get the hang of it (and it doesn't take long), a lot of time can pass before you even know it. It wears the kids out, and helps them with their hand-and-eye coordination. This game by far, provided the most fun we had all day. I would also like to mention that it won the 2019 ASTRA Best Toy Award for the active and outdoor play category and was featured on the Today Show as top outdoor toy for Summer, 2020.

The Pop and Pass is recommended for ages 6+. 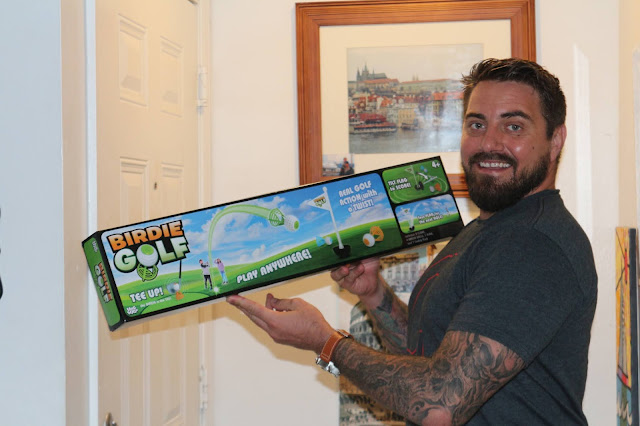 The second game we took out was the Birdie Golf Tee Up, also by Hog Wild. 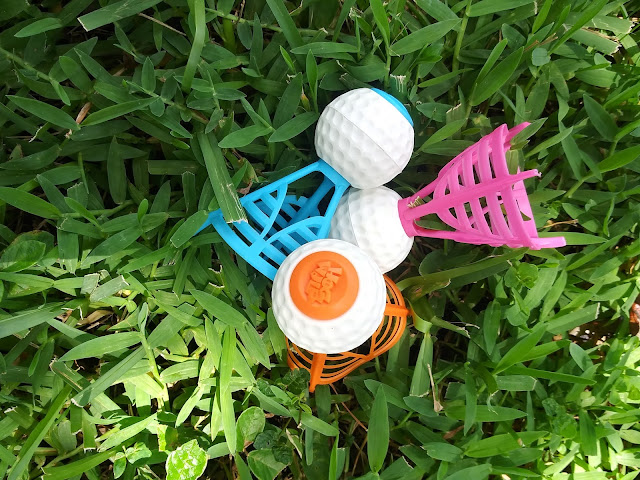 This set was great because the golf balls are attached to birdies, making it easy for them to stand, and even easier to hit. We started this one in the grass, and quickly realized it would be easier to hit them on the hard ground, and we moved back over to the tennis court (that no one else was using). 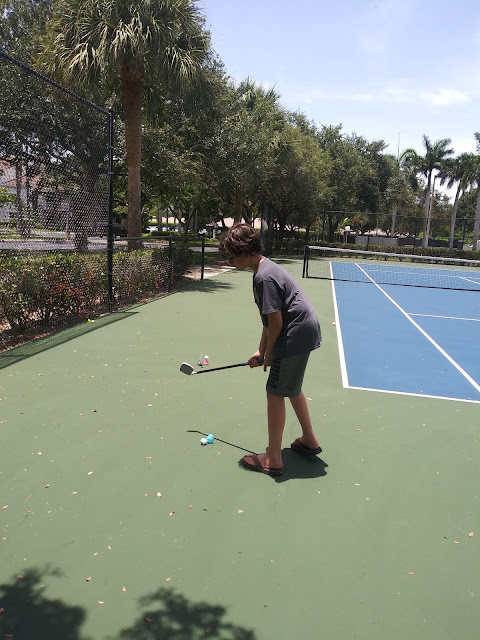 Some of us took the game far more seriously than others... He really, really wanted to hit the little marker that gives you a point. 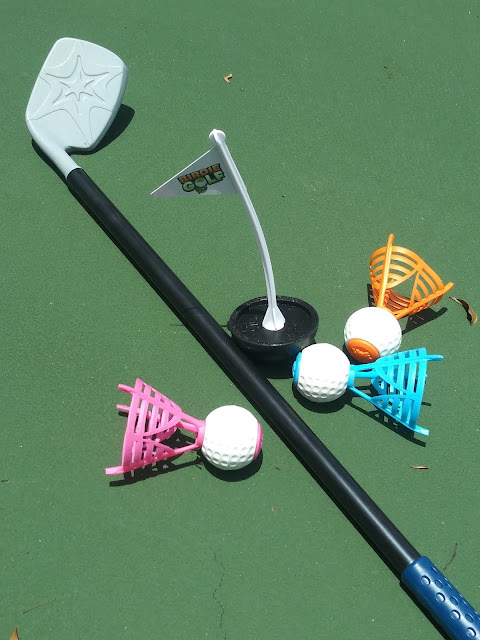 The marker can be identified by the flag. You place it where you want it initially, and from then on in you toss it after turns are taken and it becomes the next golf 'hole.' That literally makes it so you can alter the game every time you take a turn. 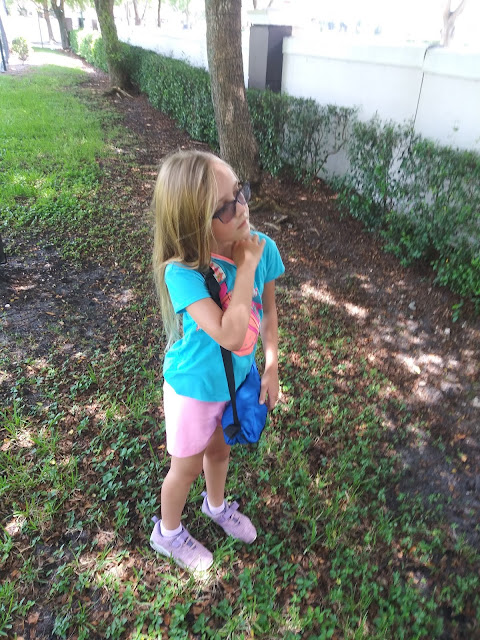 I like that Hog Wild included a little blue bag to put the accessories in when you weren't using them. Even though we store ours in the box, that bag was handy more than once when we were outside using the toys. My grandbabe put the smaller items in there for storage too, and then dropped the whole bag in the box. She's a smart one. ;)

This set comes with two clubs, 1 flag, 4 birdies and the caddy pouch. Most any age can play.