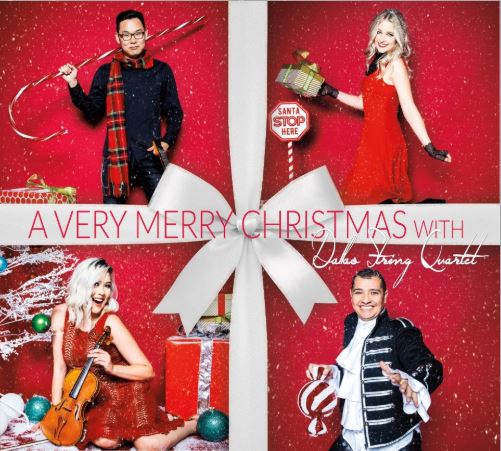 We're in full swing over here with the holiday decorations, parties, and music. Mixing up the sounds, while still keeping the holiday flavor is important to us, and this CD is a crowd favorite. Keep reading to see where the Dallas String Quartet is performing live, to help promote their Christmas album. This is music is not to be missed. Pick up a copy in stores nationwide (or online, including Amazon). Keep one for yourself, and pick up one for a friend. This is the perfect stocking stuffer or stand-alone gift idea.

Track Listing for A  Very Merry Christmas with Dallas String Quartet
1. O Holy Night
2. It’s the Most Wonderful Time of the Year
3. My Favorite Things
4. Sleigh Ride
5. Have Yourself A Merry Little Christmas
6. Mary, Did You Know?
7. Dance of The Sugar Plum Fairy
8. The Christmas Song
9. Carol of the Bells
10. It’s Beginning to Look A Lot Like Christmas

International music sensation Dallas String Quartet (DSQ) - referred to as 'Bach meets Bon Jovi' - released their debut full-length holiday album, A Very Merry Christmas with Dallas String Quartet, Nov. 8. This is the group’s first-ever full-length holiday album. With all the favorites, DSQ’s modern interpretation on the classics takes listeners on a dazzling, ear-candy filled journey. The album delivers ten shimmering versions of favorite holiday tunes highlighting hit singles you won't want to miss.
They are a fusion of contemporary classical and pop music, DSQ uses both traditional and electric strings performing as a sextet with the full accompaniment of drums and guitar. Their first single, “My Favorite Things” off the new album was met with raving reviews and featured by Vents Magazine, Medium and BuzzMusic. DSQ has over 30 million streams on Spotify, more than 4 million views on YouTube and receives over 1 million streams per week from their dedicated following on Pandora.
Dallas String Quartet has performed for Presidents Obama and Bush, the College Football Playoffs, NBA, and NFL organizations. They've sold out concert venues like the House of Blues and symphony halls and have played alongside Josh Groban, Chicago, and the Trans-Siberian Orchestra. You’ll find the group's music featured by ESPN, A&E, The Wall Street Journal and prominent Spotify playlists such as Pop Goes Classical and Sinfonía Hipster.

Check out A Very Merry Christmas with Dallas String Quartet  here through Spotify or via their EPK: https://www.dallasstringquartet.com/epk.

Tickets can be purchased on: https://www.dallasstringquartet.com/tour-dates
on December 18, 2019