The Community on Blu Ray: The Complete Series with Giveaway 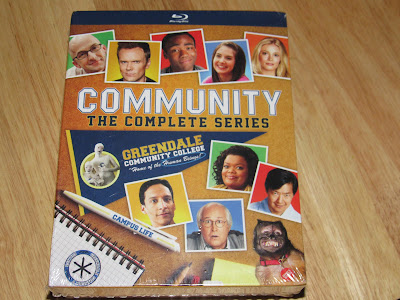 We don't watch a whole lot of TV and when we do turn it on it's usually a sports show. Right now I have Pandora running through a playlist of Christmas songs through the television, and that's nice. So while this show, Community, may be awesome, I honestly don't know!!! I looked it up on YouTube and saw that Chevy Chase is in it. I know people like him. I also saw that it is a comedy, and that it got great ratings from consumers who purchased it. So...when the chance came to give a complete series BluRay DVD set to one lucky winner, I decided to go for it! A big thank you to Mill Creek Entertainment for the opportunity!
All 6 seasons, 110 episodes are included in this set. There are also bonus features including commentary on almost every episode, hilarious outtakes, puns, gags and reels, deleted and extended scenes and over 3 hours of behind-the-scenes featurettes with cast and crew! If you like this show, this is a great prize to win. If you know someone else who does, it's an awesome gift to give for the holidays.

One lucky winner gets Community: The Complete Series on BluRay to call their own. US/Canada entrants only.

a Rafflecopter giveaway
on December 09, 2018