Slime is a Very Touching Gift, Don't you Think? 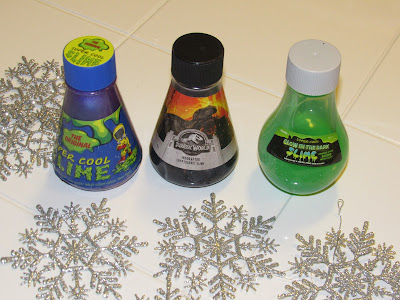 As an educator and as a parent, I can tell you slime is all the rage right now, so what better thing to tuck into their Christmas stocking, or wrap up to gift for the holiday season, than slime?! The title is a play on words I got from the manufacturer, Kangaroo Manufacturing and I thought it was really cute. It's accurate too. Kangaroo goes all out with their slime production, bottling not only the original Super Cool Slime, but also selling wonders such as Glow in the Dark Slime and Jurassic Park Slime (say what?!?) that the kids are sure to love! 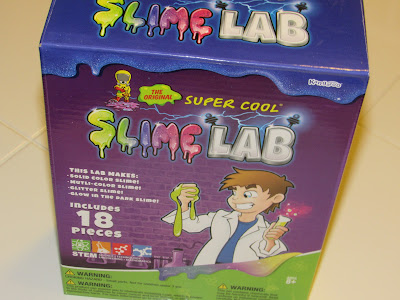 If your kids like to create slime, like my son does, or if they have requested to do it, this Super Cool Slime Lab is going to be a very welcome gift for them. We have about 6 buckets of different kinds of slime my son has made out of glue and Borax, but he has requested an official kit one more than one occasion. He's going to be delighted on Christmas morning when he opens this set.

Transform into a mad scientist and make your own creations with the Super Cool Slime Lab. Experiment with multi-color, glitter, or even glow in the dark slime! Every kid gets an A and a slime-y good adventure. This is recommended for children ages 8+ 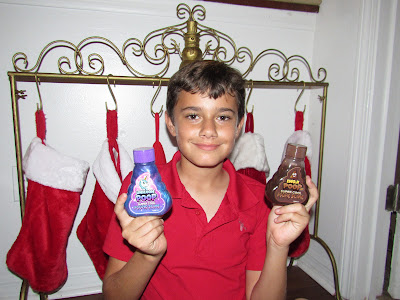 Kangaroo also has Poop Slime. And while this does not appeal to me in any way, shape or form (ew!) my son thought it was hilarious. 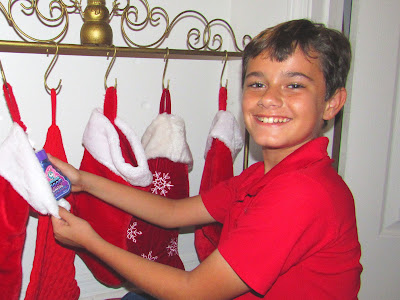 He doesn't know he has a slime kit under the tree, but he does know the poop is in the house (again, I say ew). Here is he tucking Unicorn Poop slime into his sister's stocking, and he can't stop laughing. Although I'm sure she will make a face when she opens it, I'm also sure she'll also take it out and play with it. She may be grown now, but she's still a kid at heart. ;) 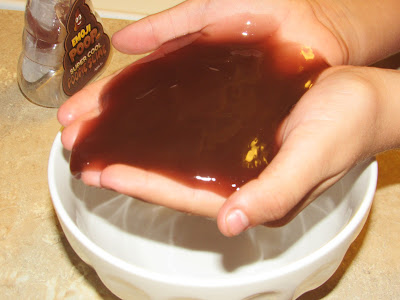 The Emoji Poop Super Cool Poopie Slime, he kept for himself. If it didn't have the name it does, it would look like any other slime, just having the color of brown, but since it was designated as doo, it has turned into something extremely amusing in this house. Have I mentioned that 11-year-old boys think this type of thing is hilarious?

He also thought the cat photo bombing our pictures was hilarious. I wasn't surprised though, there's no way she's staying out of the action. If there's something new in the house, she has to investigate it.

It may seem like an odd gift to wrap but turns out, the gift of slime is quite touching! Kids and teens go crazy over the tactile goo that’s not quite a solid but definitely not a liquid. Original Super Cool Slime® by parent company Kangaroo Manufacturing has expanded its collection with the hottest trends in the toy world – unicorns, emojis and (ahem) poop.
Emoji Poop Slime and Glow In The Dark Slime, $4.95 each, make terrific stocking stuffers, dreidel game or classroom Secret Santa gifts. Likewise, Unicorn Poop Slime appeals to the daintiest kids on your list. Jurassic World Slime in Indoraptor black or T. Rex Cryptogenic green guarantee a dino-good time of hands-on fun.
Each themed glop comes in an appealing container that resembles a chemistry beaker. Tilt it, pour it and let the squishing begin. Surprise each recipient on your list with a little science lesson. Tell them to enjoy their non-Newtonian fluid! Then watch them “Google” the chemistry lesson. Kids already familiar with the slow drip of ketchup or honey will recognize the same properties in gooey slime.
If there’s a budding scientist in the house, consider The Original Super Cool Slime Lab ($12.95). The boxed kit boasts 18 pieces, including measuring cups, mixing sticks and a slime activator that results in a jar of glitter slime, glow in the dark and multi-color slime. Now that’s super cool!
Look for these kid-pleasing presents online and at craft, party and specialty stores including TJ Max, Marshalls, HomeGoods, AC Moore, Party City, Learning Express and Hobby Lobby shops nationwide.

If you're looking for super cool stocking stuffers, I can't recommend these highly enough. This really is an 'it' gift, and it's super affordable too, which makes the gift givers as happy as the recipients. 😋😊
on December 09, 2018