Disclosure: This is a sponsored post. All opinions stated are genuine and my game-loving own. 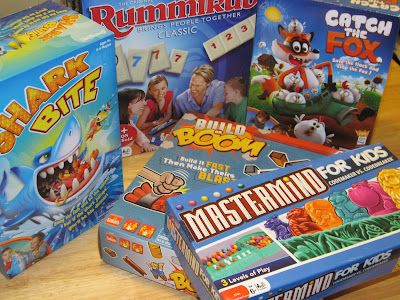 Summer is all about extra time to relax, play and unwind from the busy school year. One way we do that is with Goliath and Pressman Games. We have (5) new games for the summer, and it was hard to decide which one to play first. Eeny-meeny-miney-mo landed us on Rummikub & it's fast become one of our family favorites. 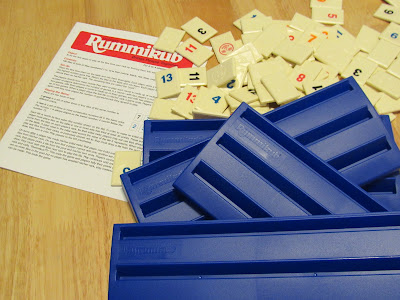 Rummikub is a game for 2-4 players, ages 8+. The contents are as seen in the photo above. There are (4) tile racks, 106 high-quality tiles, and the instructions. That's it! And the game is easy to learn, but once you get the rules down pat (we messed up at first, which you'll see later in this post), and see how you can change things up on the table, the options for strategy become wide open! Rummikub is truly great get-your-brain--working fun! 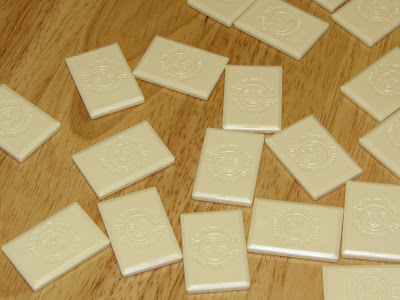 You flip the tiles upside down and rearrange thoroughly so colors and numbers are mixed well. You can stack them neatly in piles like the YouTube video below shows, but we just left them randomly spread out on the table before us (perhaps we play too much Gold Fish, lol). 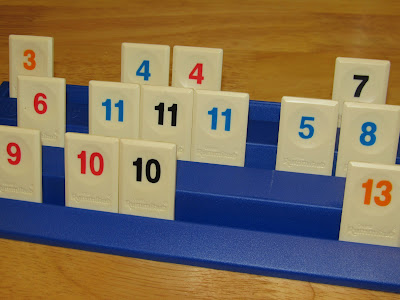 Each player selects (14) tiles to begin. You can group them any way you want on your rack, and move them at will. The goal is to come up with straight numbers of the same color (much like Rummy), such as 2-3-4 or 10, 11, 12, 13 etc., or at least three tiles of the same number in different colors.


You have to have (3) tiles or more that equal at least 30 when added together to start. After that, you are free to play without an amount restriction. Remember if you are using three numbers alike, they have to be different colors. My son and I both had over 30 with our groups of (3) numbers that were the same (as seen above), but we didn't have different colors. We knew something was off, re-read the directions and began again. It took a minute or two to get used to, but once we got rolling it was like we'd been playing forever.

Once you learn those initial rules, the real fun comes with manipulating the table. You can add to sets or mix and rearrange them, as long as 3 tiles (on the table) are still in compliance with the rules after the move. As the game progresses, choices are more plentiful and you really have to start thinking.

When you can no longer play you pull a tile from the table and add it to your rack. The person after you goes next. The goal of the game is to empty your tile rack first, and say, "Rummikub!" 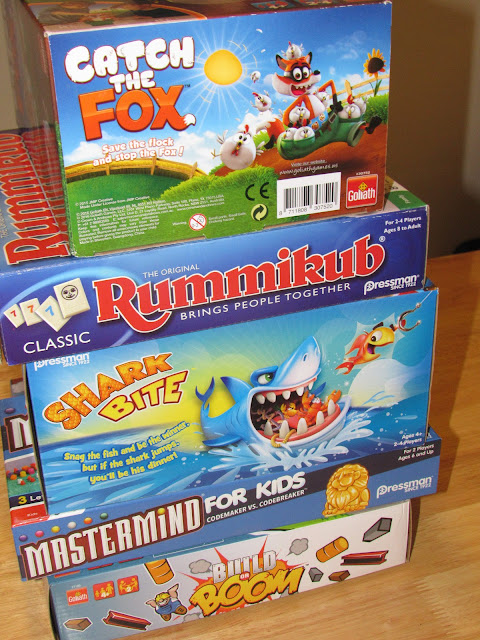 There are a TON of awesome games available for summer play on these two (Pressman and Goliath) websites. Rummikub was the first we played, and it's definitely our favorite, but we love the others too! Since I'm going to give one away (the sponsor has generously agreed to mail one to a lucky winner), I'll tell you a little bit about each, and give you a link to explore in case you'd like to learn more.

1. Catch the Fox: I played this one with my granddaughter. It's for 2-4 players, ages 4+. She thought it was a hoot that the fox would lose his pants. Underwear are funny when you're 5-years-old. ;)

It’s no surprise that Rummikub is so popular–it has all the elements that make a great game: it’s easy to learn and fast moving, it’s different every time it’s played, it combines luck and strategy, and it changes quickly so every player has a chance to win until the very end. And with more than 50 million units sold, Rummikub is one of the world’s best-selling, and most-played, games. Players take turns placing numbered tiles in runs (consecutive numbers of the same color, like 2, 3, 4 in red) and groups (three or more of the same number in different colors, like a red 9, a blue 9, and a black 9), rummy style. It’s easy to learn, but packed with strategy–the “board” changes all the time as players adjust the tiles on the table. The Joker tiles add to the fun; they can be any color or number. The object is to be the first player to play every tile on your rack. Players keep track of who wins each round–the player who wins the most rounds wins this time-tested tile game (there’s also a point system for use as a tie-breaker).


Get ready to have a REEL-y good time when you play Shark Bite! Snag the fish and be the winner, but if the shark jumps, you’ll be his dinner! Place the fun and colorful sea creatures into the game unit with a snap, and grab your friends to start playing. Players take turns rolling the die and fishing for the sea creatures using the fishing rods. But watch out – you never know when the shark is going to bite! This battery-free game will have kids hooked at first bite! For 2-4 players, ages 4 and up.

Kids test their code-cracking prowess with Mastermind for Kids, the challenging game of logic and deduction. The game comes with three levels of play, so kids can learn and grow with the game. With more than 55 million units sold, Mastermind is a great strategy game . . . and one of the world’s most popular games ever. It’s easy to learn and fast to play, and it’s different every time. The Codemaker sets a secret code, then the Codebreaker tries to match the code using logic, deduction, and maybe even a little bit of luck. After each move, the Codemaker gives clues to the Codebreaker. With lots of possible code combinations, every game is guaranteed to be a brainteaser. All of these game components can be stored in the game board. For 2 players, ages 6 and up; the winner will be a true mastermind. Includes game console with built-in storage tray and code peg shield, 72 jungle animal pegs in 6 colors, 30 scoring pegs in two colors, and complete instructions. 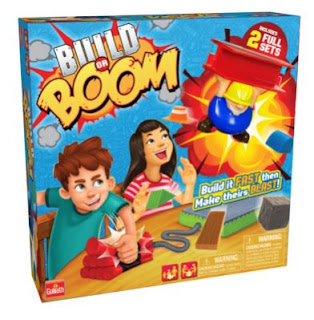 5. Build or Boom
The big boss is looking for the best builders in town! Step in line and see who can be the first to bring the blueprint cards to life. Build your structure quickly yet carefully on your platform. Then SMASH your boomer to send your opponent’s structure tumbling. There’s only room for one builder in this town… do you have what it takes? Or will you get boomed on your way to the top? For 2 players. Ages 4 and up.

You can find these in retail stores, on Amazon or buy them online at Goliath Games or Pressman Toy. One lucky winner gets one to call their own. US entrants only.