Disclosure: I received a complimentary movie. All opinions stated are genuine and my own. 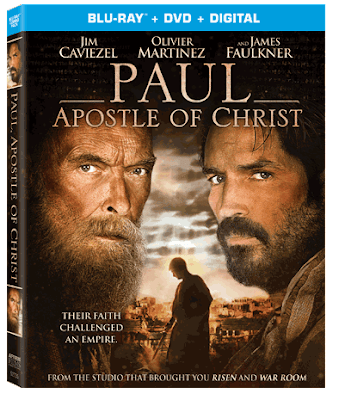 It's not often there are three Christian movies on at the theater, at the same time, but that was the case when Paul, Apostle of Christ was playing. We went to see one of the three, definitely hoping to see this one, but our timing wasn't right that particular day. The movie had already started playing and was well into the plot by the time we arrived. I didn't want to miss the beginning. We happened to be in the area again 2 days later and went by the theater window to see what the movie play times were. It was already off of the big screen. Bummer.


Now though, the movie is out on DVD (and BluRay), so anyone who would like to see it, can pick up a copy to own! My good friend came over yesterday and I made dinner and was going to pull this out, but she fell asleep on the couch!! I finished her laundry (her washing machine is flooding in her house), and woke her when it was through. She apologized profusely, but no need. I already knew the rough day she'd had, and we have been friends for over 30 years, so I knew we'd have another opportunity. I don't want to watch it until she's here, but it's so tempting to put it in the machine!!  It's okay, I can exert patience (I think.. kidding...sort of). ;) :) We'll see it soon, I'm sure.

In the meantime, if you're interested, the movie is now for sale. You can also enter to win a copy here (scroll to the bottom of the post). Good luck to all who enter!


Paul (Faulkner), who goes from the most infamous persecutor of Christians to Christ’s most influential apostle, is spending his last days in a dark and bleak prison cell awaiting execution by Emperor Nero. Luke(Caviezel), his friend and physician, risks his life when he ventures into Rome to visit him. Paul is under the watchful eye of Mauritius (Martinez), the prison's prefect, who seeks to understand how this broken old man can pose such a threat. But before Paul's death sentence can be enacted, Luke resolves to write another book, one that details the beginnings of "The Way" and the birth of what will come to be known as the church. Their faith challenged an empire. But their words changed the world.

There is a Giveaway!

Five lucky winners gets one to call their own. US entrants only. Winners selected 8/25/18.

Sponsor will mail prize. Enter below to subscribe to the Sony Pictures Home Entertainment and FrontGate Media websites, and you are entered to win. Or you can enter on their site instead of mine (same entry form): https://www.blessedfreebies.com/paulapostleofchrist.html