It's Basketball Season: Hydrate with BODYARMOR

That's my boy. He's drinking a Blueberry-Pomegranate BODYARMOR LYTE (just 3 grams of sugar per serving). There are 4 flavors of LYTE available. My son has tried Peach Mango, Cherry Berry, Blueberry Pomegranate, and Orange Citrus...he loves them all. One thing you should know, when he plays, he plays hard. Another thing to know...he takes the sport of basketball very seriously. He'll stay out far longer than he should, trying to get that last bit of energy out of him before he comes home and collapses on the couch. I used to try and shoo him directly to the shower, but these days I've gotten smarter and I put a towel down before he sits, ha! Simple, but effective and then after he hydrates and rests a bit more, both he and the towel go right to the wash (not together, of course).

Another thing we've learned to do, to allow him to get in more practice time, is bring along plenty of super refreshing drinks when we head to the court. I feel comfortable packing BODYARMOR LYTE, a superior hydration sports drink with a coconut water base. These are natural, low-calorie drinks packed with tons of electrolytes and vitamins. They are high in potassium, low in sodium and they have no colors or flavors from artificial sources. Just the kind of drink I want my son to have when he needs to refresh or hydrate. These are the next best thing, next to water...and even better than water, I have to say, on actual game days. 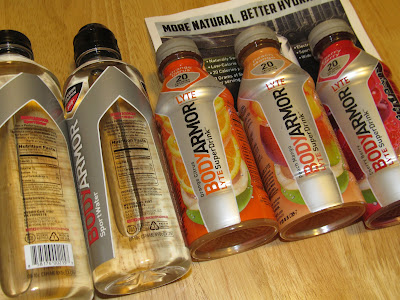 And speaking of water... BODYARMOR now has a premium water, designed by athletes, for athletes. It has a Performance pH of 8+ and a proprietary Sports Electrolyte formula.

You can get it in a big-mouth bottle, or a flip-top. My son likes the flip-top and takes that one to school in his bookbag so he has it ready for afternoon basketball practice. He also takes it to the court to practice, and uses it at home during the collapse-on-the-couch-to-hydrate-and-rest thing I talked about above. ;) 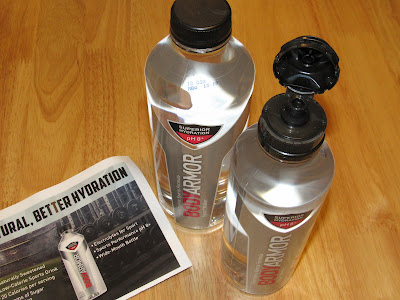 I prefer the wide-mouth bottle because it's huge. While it may not be my go-to drink during and after basketball practice/games, like it is for my son, it is perfect to carry with me to work. I may not be running marathons there, but I feel like it sometimes. ;)  In any case, BODYARMOR has hit a homerun, scored half-court and gotten the winning touchdown with its new line of BODYARMOR LYTE drinks and BODYARMOR SportWater. It's no wonder big sports names have made this the brand of athletes. I like everything about these drinks and can highly recommend them both.