Disclosure: Many thanks to Propeller Consulting, LLC for providing the information for this post. Opinions are 100% my own and NOT influenced by monetary compensation. I did receive a sample of the product in exchange for this review and post. 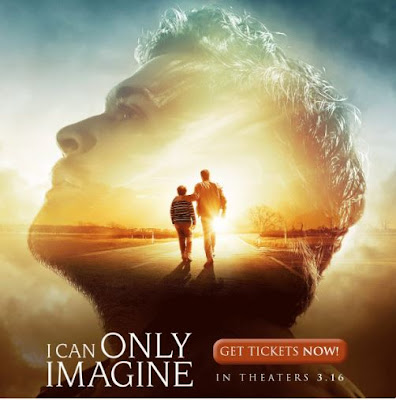 Imagine what it's like to have your mom leave when you are 11. Imagine how much worse it would be, if your dad was just downright mean. That's the plot beginning for the movie "I Can Only Imagine" starring Dennis Quaid, J.Michael Finley, Madeline Carroll, Trace Adkins and more. The twist in this Christian drama comes from the change seen in the dad's life, after the son has grown up and moved out, trying to make a living as a musician, without his daddy's approval. Something happens and God enters the picture. As many of us know, when God makes his entry, things do change, and always for the better. I've seen miraculous transformations, so I know they can happen. And I love a story like this one, where that is shared through a movie for the whole world to see.


I Can Only Imagine performed by MercyMe, the band named after a saying the lead singer's (and also the writer of this song's) grandfather used to say, is the first digital Christian song ever to hit 2xPlatinum, to date. It did crossover to mainstream radio. The movie gives you the details behind the song, and though it only took lead singer Bart Millard a few minutes to write it, a lifetime of his history was behind the words.

It’s the song that brings ultimate hope to so many … often in the midst of life’s most challenging moments. Amazingly, the song was written in mere minutes by MercyMe lead singer Bart Millard. In reality, those lyrics took a lifetime to craft.

Although he found faith at a young age, life wasn’t easy for Bart. He leaned into an active imagination and his love of music as escapes from a troubled home life. As he grew older, Bart turned to football in hopes of somehow connecting with his abusive father. But a career-ending injury—combined with the vision of a teacher who saw unlimited potential—set Bart on a musical pathway.

Chasing a dream while running from broken relationships with father and Shannon, his childhood sweetheart, Bart hits the road on an old, decrepit tour bus with his new band MercyMe—named for his grandmother’s favorite expression. With the guidance of a grizzled music-industry insider, the band begins a journey none of them could ever have imagined.

I Can Only Imagine will be in theaters March 16th, in the US and Canada.
We have already marked it on our calendars and can't wait to see it!