The Star Movie is now out on DVD #thestarmovie #flyby 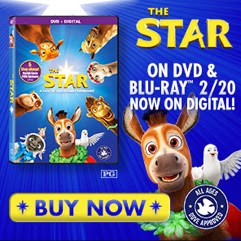 I missed The Star when it was live in theaters! We actually went before Christmas, but it had been taken off at the theater closest to us (which we all thought was crazy, considering it was the perfect accompaniment to the holiday). Bummer! I just found out that it's now out on DVD and blu-ray, hurrah! We will definitely be picking up a copy so we can finally get to see it.


The Star is the story of the 1st Christmas, as seen from the perspective of the animals. Such a cheery way to put a twist on it, for the kids and the lovable characters are sure to become instant household favorites!

There are some cool 'extra's on the DVD, such as the live guided Bible study for children, with Devon Franklin. Folks are saying it is very "interactive and super engaging!" In fact, more than an hour worth of 'extras' were added to the disc. I'm looking forward to the Bible study I just mentioned, (you can check that out on their Facebook page too), and to the 'Star' a-oke with Bo. :)

I also can't wait to see the behind-the-scenes tour with the stars. With big hitters like Patricia Heaton, Kelly Clarkson, Tyler Perry and Oprah Winfrey, those clips are sure to be entertaining to watch. The soundtrack comes with the big hit, ' Mariah Carey sings the Christmas ballad with the same name, "The Star." I fell in love with that song, the very first time I heard it on the radio.

It's time to add something new to your DVD library for the kids, yes? :) The Blu-Ray was released February 20th. Be sure to look for it, the DVD, and/or the soundtrack in retail stores everywhere, or click here to learn more!
on February 26, 2018