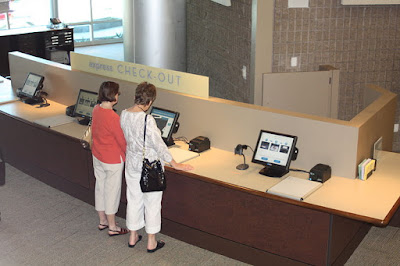 I've heard conversations where people are worried about technology replacing humans. Recently I heard a man ranting and raving over the self-check out cash registers at Home Depot (which I love, by the way). He was worried too that technology was replacing human workers. I looked around the store, and there were still registers run by humans, there was a real live person at the end of the four self-pay registers for help, and there were peeps all over the store wearing their bright orange vests to indicate they were employees.

In short, I'm not overly worried. I think there will always be a need for humans in the workplace, no matter how sophisticated things may be. Machines are made by man, which means they're going to break... and need fixed. Period. Can we streamline with machines? Yes! Is that a good thing? Again, I think it is good.

Like the previous store mentioned, Walmart has a few self-checkouts too, and they're awesome. They save a bazillion years in line (exaggeration, but not by much), especially this time of year when everyone is out shopping for holiday items. I went in today to get a gallon of milk. I completely forgot it was Black Friday. You do NOT want to be in a Walmart line on Black Friday if all you're getting is milk. There were policemen stationed outside, lanes blocked off, and pallet upon pallet of goods that were shrinkwrapped and waiting for their turn to take the shelves. And the lines? They were at least 20 people deep. My saving grace? The self-checkouts! I stood in those lines a little longer than usual, but no longer than 5 minutes, tops. Had I been in a traditional line, that would not have been the case.

Andrew Charlton shares my opinion, and takes it a step further, noting that not only will automation not take over mankind, but that it's addition will help to boost prosperity (not diminish it). He does address how technology changes might ill affect workers, and discusses how such matters can be preemptively addressed. I think it's not only smart to take proactive measures, but essential as well. Planning for change, anticipated and unanticipated (yes, you can do that) can make a world of positive difference.

"We need strong education, training and employment policies to prevent vulnerable workers from sliding into joblessness. Targeted programs must help those who do lose their job to machines to find new, and better work."

There is little doubt that technology is going to keep moving forward, and probably at a breakneck speed. Changes that we have seen in just a few years are astounding on their own. To thwart progress would be just as lethal as to not properly prepare for it...or at least that is my opinion.

If this subject interests you, Andrew Charlton has a lot more to say about it. Head on over to Amazon, to see what he has written regarding the influence and future of technology trends. His work is well lauded and has been published in over thirteen different languages.
on November 24, 2017