What is a Whiffer Sniffer?

Disclosure: I received product compensation. All opinions stated are genuine and my own.

My son is 9 and my daughter is freshly 18. Who would think they would both like the same thing? It doesn't happen all that often, but with Whiffer Sniffers Scented Backpack clips, I've got a homerun hit going with both of them. My daughter took the jelly bean you see in the photo above (bottom-right) and my son opted for two of them. The remaining two will go to a certain little three ("almost four, Grandma Rosey") sweet dumpling of a child that I know. :) What kids wouldn't want to add a deliciously scented fun and cute character plush to their backpack? Not many, I'd be willing to bet. :) 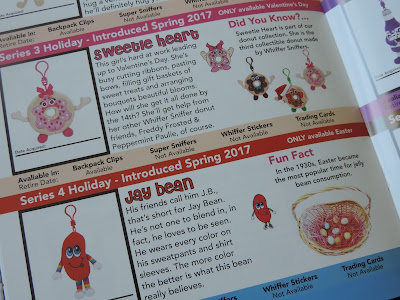 Along with our Whiffer Sniffers came a book that detailed all the ones they have to offer (they are currently on the their fourth series, which was just released). These very affordable little cuties became instant collectibles, and currently have over fourteen million YouTube views; rare releases are already getting a big following on sites like eBay; and they have won a plethora of awards, including 2016 Creative Child Product of the Year, 2016 Tillywig Sterling Fun, and the 2016 Toy Insider-Top Inside Toys. 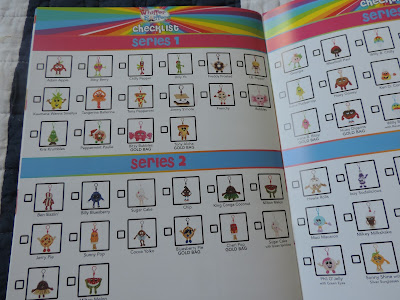 At the back of the book we received (softcover magazine could be a better way to describe it, but I use the term 'book' by default). :)  My son loves collecting, so to have a checklist like this one sets him into instant daydream mode. He likes being able to check off the ones he owns, and dream about the ones he would like to own in the future. 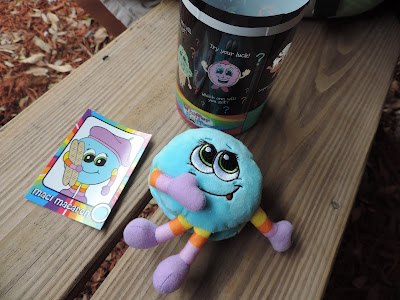 There is a Mystery Can too, that offers a limited-edition surprise Whiffer Sniffer and photo trading card to the lucky recipient. My son wanted this can (he can't resist a surprise) and Maci Macaron came out. Such a cutie pie, and it definitely a delicious smell. 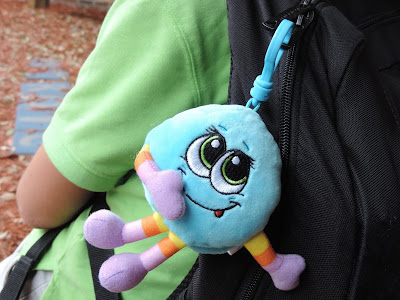 He's had this on his bookbag for a couple of weeks now, and it still smells really good. It's cute as can be too, don't you think?

Each Whiffer Sniffer is approximately 4" tall and has a sturdy plastic clip to go on your child's backpack or gym bag. You can see Maci here...looks like she's having a good old time hitching a ride, doesn't it? That's okay, my son doesn't mind a bit. :)