There are THREE Unique Game Modes in the new Call of Duty: Infinite Warfare


Two of my boys are grown and have families of their own, the oldest of whom also gave me a sweet granddaughter. The boys have a lot of similarities, but they're also different in many many ways...as is the case with most siblings, I suspect. 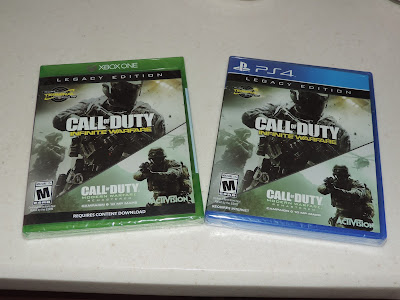 The one thing they always agree on though, is that they both like to play Call of Duty! So...good mama that I am, I got them both a copy of the latest and greatest version, to ring in the new year: Call of Duty Infinite Warfare.

The acclaimed studio team at Infinity Ward put together an amazing version of this game with three unique game modes; a single player campaign with unforgettble characters, rich emotional arcs and epic battles; multiplayer that introduces innovative gameplay which challenges players to achieve their goals in creative ways based on their specific play style; and an all-new cooperative zombies mode that takes players on a wild ride into the 1980s with Zombies in Spaceland.

1. Campaign Mode: Players engage in an unforgettable journey as they engage in heoric battles with hallmark Call of Duty combat. This campaign spans our solar system, taking players on a journey from Earth and beyond. Return to classic, large scale war. set within a plausible future setting, the game puts players in the role of Captain Reyes, a Tier 1 Special Operations pilot, who takes the helm of the Retribution, one of the Earth's last remaining warships. In a time of unthinkable adversity, Reyes must lead the remnants of coalition forces against a relentless enemy. Many parts of the campaign, will for the first time ever, occur as a near seamless, action-packed experience with few visible loading times.

2. Mutli-player: It's an incredibly deep experience where everything, including weapons, equipment and more has been built around all types of play styles, and where players have the power to combine them however they wish. Players customize their rigs , and different rigs are unlocked as you level up while playing multi-player. This mode also gives you the option to join mission teams, which will allow for unlocking additional XP as well as a variety of unique items as missions are completed.

3. Zombes in Spaceland: This new mode takes players back to the 80's as they battle through an action-packed storyline, fighting as one of four classic '80s archetypes.

Both of my boys grown children work hard and don't get a lot of down time, so when they do, it's nice for them to get absorbed in a video game and just chill out for a bit. Both boys also have birthdays coming up early-ish in the new year, but I know one or both of them will purchase this game before then, so I'm gifting these as new year's gifts. What better way to start the new year, than owning the brand new Call of Duty Infinite Warfare game?!